M2’s Shot Triggers range has a track record of bringing rare and refined arcade shmups home, either making them available on consoles for the first time ever or at the very least making them affordable for the first time in decades. The titles M2 work hard to preserve for future generations are often so incredible their reputations precede them; everyone from long-term genre fans to casual shmup players being well aware of their general importance and great mechanical depths within these extraordinary releases – and then there’s Aleste Collection, a gaggle of Master System and Game Gear games that were mostly already available at home and in English decades ago. It’s easy when faced with this latest release to wonder why M2 bothered creating this instead of going for something like Progear no Arashi, Batsugun, or any number of other shmups that would easily fit in with the style and status of previous Shot Triggers ports. 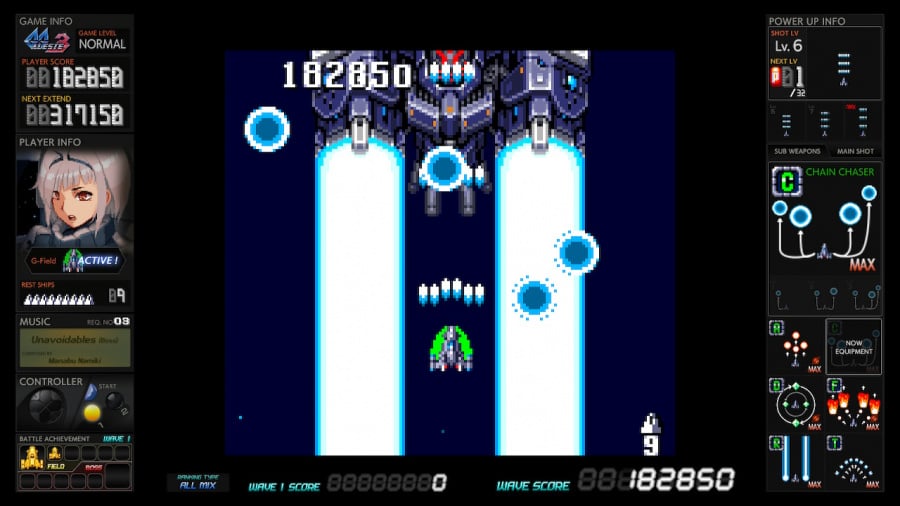 Easy, but wrong. In spite of the apparent ordinariness of the games within, this collection couldn’t be more M2 if it tried; it’s the perfect showcase of the company’s love for the genre and an honest desire to see good old games remain relevant, remain played. As such, it’s actually business as usual for gaming’s premier retro wranglers, with the Shot Triggers logo acting as a seal of quality – a promise of fun times with a carefully-curated selection of games. You’ve just got to trust them on this one.

There is possibly nothing that better demonstrates Sega’s commitment to being so very Sega or M2’s dedication to their noble craft than GG Aleste 3, the all-new old game created specifically for this collection. What makes it so special is that GG Aleste 3 isn’t vaguely retro-styled or a programmer’s daydream designed for a hypothetical Game Gear 2.0; M2’s social media has taken great pains to show the game running on Sega’s battery-devouring hardware in all its smeary backlit-screened glory, a genuine and official Game Gear game in released in 2020 (Sega have even given it a product code – T-159017 – to go alongside GG Aleste’s T-66017 and GG Aleste II’s G-3303). 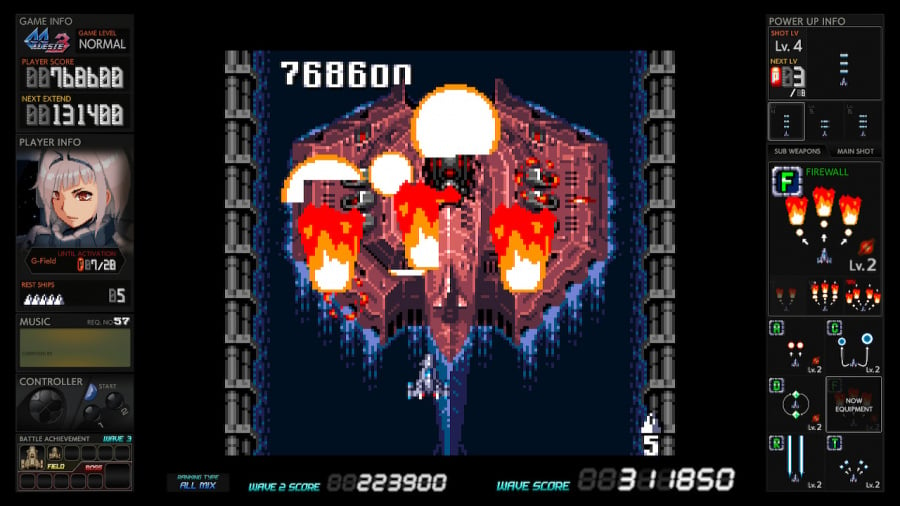 Which is nice enough, but all that effort means nothing unless GG Aleste 3 is actually worth playing. Luckily for us, this is not just a novelty pet project but a good game in its own right, as fast and cinematic and demanding as all the best shmups are and “retro” in a different way to the term’s current usage in eShop descriptions and social media tags. GG Aleste 3 isn’t punishingly difficult and it doesn’t use pixels as big as your fist to draw pink neon lines for its faux-eighties aesthetic; instead, it’s beautiful, engaging, and slick, a game that uses every trick in the book to push the hardware to its limits rather than worrying about fitting within on-paper limitations. You see GG Aleste 3 isn’t just a game, it’s an attitude. “Retro” can still push boundaries, “retro” can still surprise and amaze, “retro” can be more than another NES-like platformer mugging it up to a knowing audience.

The old-old games in the collection are no slouches either, with Master System titles Aleste (AKA: Power Strike as it was known in the west – Aleste Collection allows you to pick either) and Power Strike II (available for the first time in Japan) as well as Game Gear titles GG Aleste I and II (AKA: the other Power Strike II) – all better made and more fun than thirty-year-old vertical shmups for 8-bit hardware have any right to be.

After starting up any of these games for the first time, a single page “How to play” cheat sheet pops up, quickly covering all the basics (these are also directly accessible from the manual option on the main menu) and sometimes even offering helpful little pointers: GG Aleste’s shows all six weapon icons as you would expect it to and then takes the time to attach a “Homing shot recommended” note to the side, like a friend giving a little tip before you start. 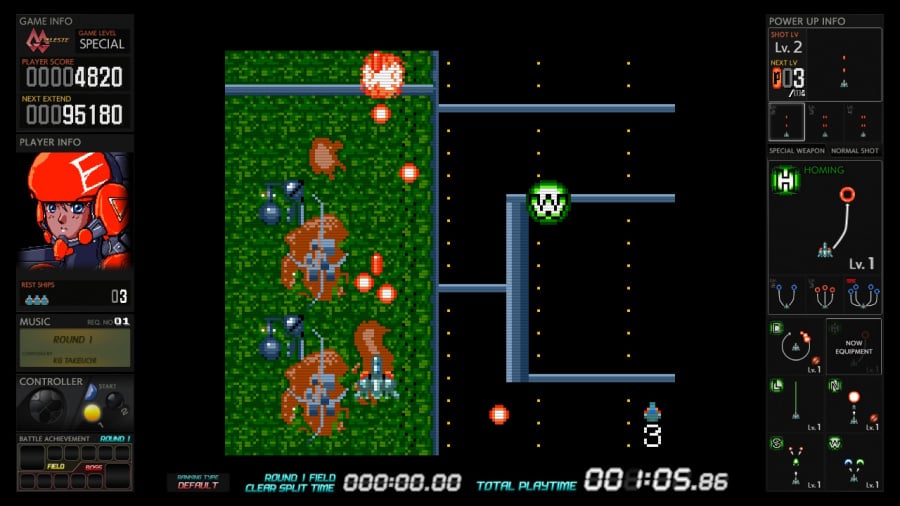 Once you’re in, you’ll find every game has access to a full set of display options: Scanlines are available with four degrees of intensity – they don’t come close to recreating the look of an original Game Gear screen when used in conjunction with the GG Aleste trilogy (thank goodness) but they do give pixels a nice clean edge and the slight separation they need to really shine. Smoothing is as art-destroying as it is on any retro compilation, but at least it’s there for those who want it. The screen itself can be resized in various ways, including a pixel-perfect mode, “normal” (reproducing the original display’s aspect ratio), fit-to-screen, and a manual zoom that allows you to squish and stretch the image in any way you please, all the way from the original resolution (resulting in a comically small play area whether docked or portable) to having the game stretched horizontally across a 4K TV.

It’s great that these options are there, but it’s even better that – for most people most of the time – the settings are fine exactly as they are, allowing you to spend less time fussing over menus and more time playing games. Other universal extras include the option to remove the sprite flickering that sometimes occurs in the default (and most accurate) hardware mode, as well as the ability to create a quick save at any point (as well as load one up) – and those keen on chasing high scores will be pleased to know loading one of these saves automatically disqualifies the score from the online leaderboards, preventing save-scumming for points. 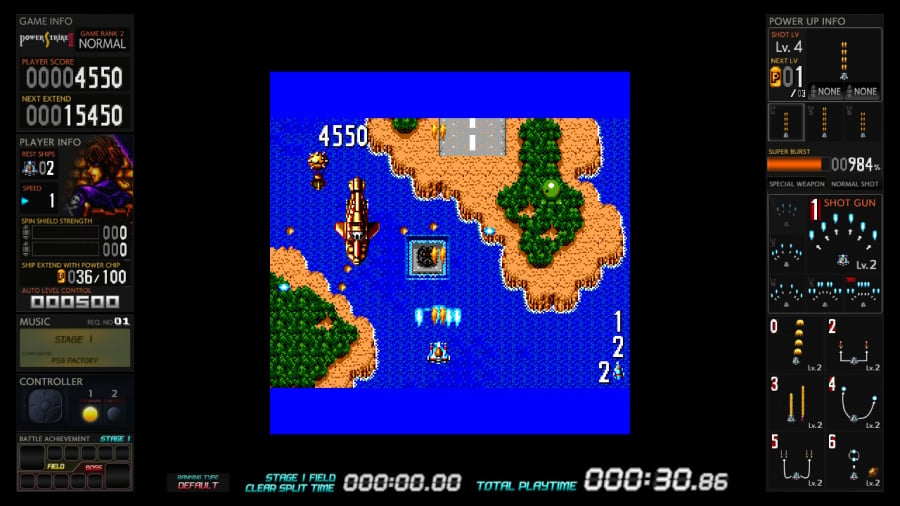 All other tweaks are tailored to the game currently being played. Power Strike II has a toggleable debug mode, GG Aleste has optional auto-bombs, and the original Aleste has an “Aleste Easy” mode which prevents you from losing power levels – to name just a few of the optional adjustments available to you, making it possible to not only set the games to your liking but to alter things that wouldn’t be possible if you were playing on original hardware.

Once all that’s sorted, all that’s left to do is to enjoy one of these great shmups with the optional assistance of M2’s incredible “gadgets”: sets of reactive information panels that, if you choose to have them on, sit in the unused space other retro re-releases are often happy to fill with passive wallpapers (that said, passive wallpapers are also available in Aleste if you want them – M2 really does cater for all tastes). These are more than a bit of visual clutter or some novelty to stop the screen feeling empty; the information on offer is at least interesting (such as the title and composer of the current music track) with the rest being genuinely useful. 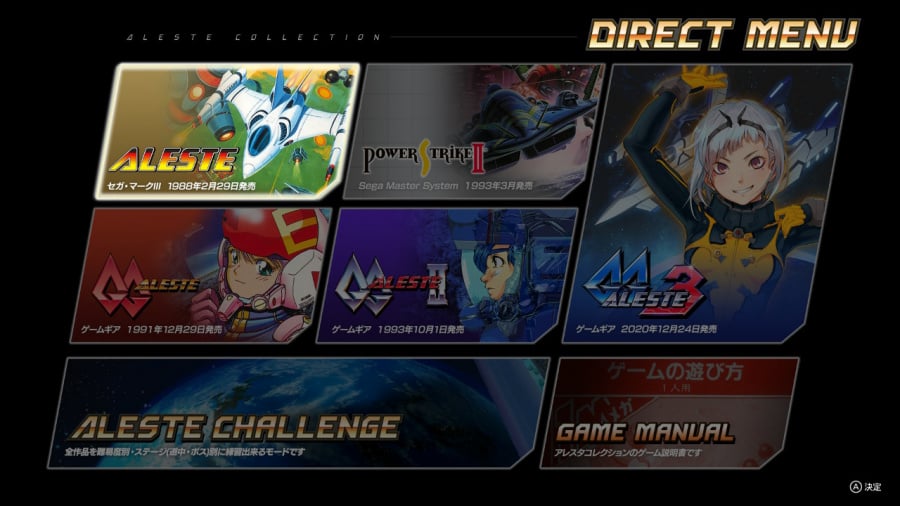 Being able to see at a glance which shot type comes in a capsule labelled 4 or 0 or H is very helpful when scrolling towards a screen-filling boss, and the same goes for the information on the very brief periods of invincibility granted when an item’s picked up or how exactly many power-up capsules are left to collect before you’re awarded a free bomb. Even things you may not have any serious desire to learn at all will sink in just through the experience of playing the game and noticing how these gauges react as you play; there’s no doubt these gadgets will help you become a better player whether you harbour ambitions of outscoring everyone you meet or simply want to shoot down waves of enemy ships on a Sunday afternoon.

Challenge mode rounds off this impressive package. Here you can tackle any stage, any boss, the two together, or even a whole game, and once – if – cleared you’ll be hopefully be awarded either a bronze, silver, or gold medal depending on your performance. As with everything else in Aleste Collection, the aim here is to facilitate play rather than punish nonbelievers and those who would like to practise the final boss of GG Aleste II on the easiest difficulty with a max-power ship can do so, just as those determined to clear entire games in a single credit on the hardest setting can adjust the run to their liking, too. 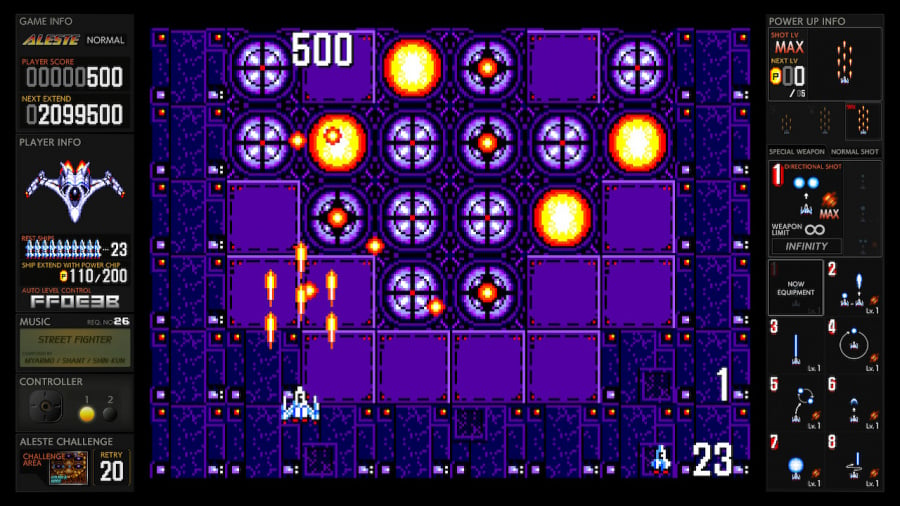 Thanks to this easygoing nature and the novel rewind feature used in this mode in place of lives, turning back the clock a few seconds upon death to give you a second chance, challenge mode is transformed from a little something extra to do into a great learning tool, giving you the chance to appreciate just how much is going on in any moment – and just how much you should be keeping in mind – even in “simple” old shmups like these.

On the downside, we’d like to have seen a little more historical material to fill in the backgrounds of these titles, but that’s hardly a major issue and has more to do with the way we’ve been spoilt by releases like Street Fighter 30th Anniversary Collection and SNK 40th Anniverasy Collection than any failing on M2’s part. If you’re feeling really grumpy, you could point out that by focusing on the Master System and Game Gear entries in this series, M2 has missed out on the chance to pull together some of the best shooters in existence – Super Aleste, the only instalment on the SNES, would have made a fantastic inclusion – but who knows, this may be the company’s way of testing the waters ahead of a full series anthology.

This is unlikely to be the Aleste collection anyone wanted. Those interested in the early days of Aleste will quickly notice the lack of the MSX2 games and the omission of Musha, Dennin (AKA: Robo), and Super Aleste will disappoint those fond of the most popular entries in the series. However, even without those, Aleste Collection still contains five great shmups and represents excellent value for money, especially when you consider this package costs much less than some second-hand cart-only auctions do for single games contained within it – and that’s before you even consider GG Aleste 3’s very welcome addition.