Among Us Review (Switch eShop)

Innersloth’s Among Us has become something of a gaming sensation in 2020, some two whole years after it first quietly released as a free-to-play title on iOS and Android devices. Due to a combination of factors – which no doubt include huge Twitch popularity driven by its unique social dynamics and a captive lockdown audience looking for some simple multiplayer fun-times – this cute little indie gaming experiment is now one of the most talked-about titles of the year. Having been left out of the party up until this point, Switch owners finally get to join in the fun with a cross-play enabled port which has a few niggling issues here and there but, overall, delivers in serving up some super-addictive whodunnit hijinks.

Among Us sees groups of between four and ten players come together as crewmates aboard one of three claustrophobic spacecraft where they work together to complete a checklist of random tasks while keeping a keen eye out for an imposter or three lurking within their ranks. The imposter – or imposters – are randomly assigned at the beginning of each round and must attempt to murder all of the other players, sabotage their craft and generally cause a nuisance without raising suspicion and alerting their shipmates to their true identity, leading to them being called out during one of the game’s hilarious emergency meetings and ultimately jettisoned out of the ship and into the never-ending blackness of the space void. 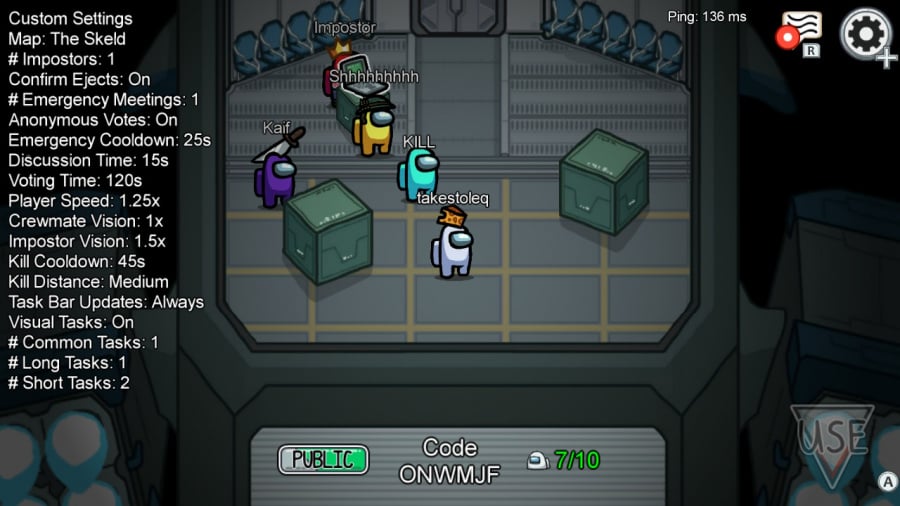 The genius here is in how such a simple premise – one that takes no time at all for even the most casual of gamers to get to grips with – can lead to so much actual tension and genuine hilarity. The social interactions that take place, the paranoia, the emergency meetings full of backstabbing, cajoling and bare-faced lies, the imposters attempting to set one-another up and the arguments that break out… it’s never less than supremely entertaining.

Of course, being an online game where you’ll most likely spend the vast majority of your time playing with randoms, the quality of your experience can be vastly affected by the players you are joined by at any given time but, with servers currently full of eager participants, we’ve found that Among Us delivers more often than it lets you down and, if you happen to be playing with a bunch of friends locally or over the interweb, it’s a guaranteed blast.

There’s a wonderful mixture of gameplay elements at work here, a finely balanced combination of teamwork, co-operation and deceitful subterfuge involved in either successfully removing the imposters from the fold or murdering all and sundry, and rounds rarely play out in exactly the same manner as a result. 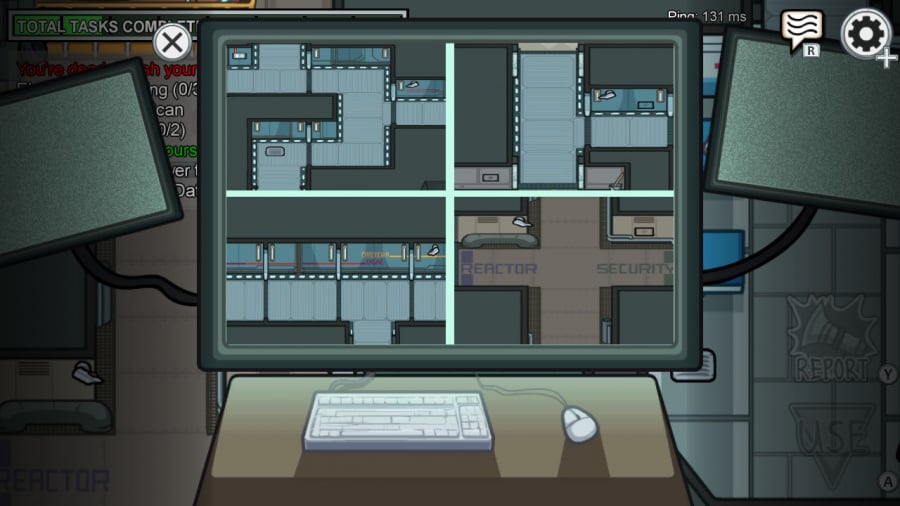 Assuming the role of an innocent crewmate and zipping around the ship to repair wiring, swipe cards, upload data and so on can be genuinely tense as you wait to be offed at any moment. Likewise, taking on the role of the murderous imposter can be a properly intense time where you need to choose your moment to strike, sabotage or disappear into a vent very carefully. The game also does a wonderful job of minimising downtime with dead players continuing to contribute as ghosts who can still partake in tasks and also get to sit back and enjoy the hilarious lies and deceit during emergency meetings where they now know who the imposter is.

Porting this game to Switch has seen Innersloth need to get to grips with the console’s unique control setup and, in this regard, there are few niggling issues here – the biggest of which arises from the game’s lack of in-built voice communication options. If you’re not using the likes of Discord to communicate with other players you’ll need to type in your questions, accusations and remonstrations during the constant emergency meetings that take place during a round and doing so can be a bit of a pain, most especially if you’re playing in docked mode where fiddling around on the fullscreen keyboard is cumbersome and also blocks your view of the ongoing conversation. It’s not a huge problem, and it’s one that’s much less of an issue in handheld mode where touchscreen controls to speed up the process, but it can sully the fun somewhat when you can’t get what you want to say out quickly enough. 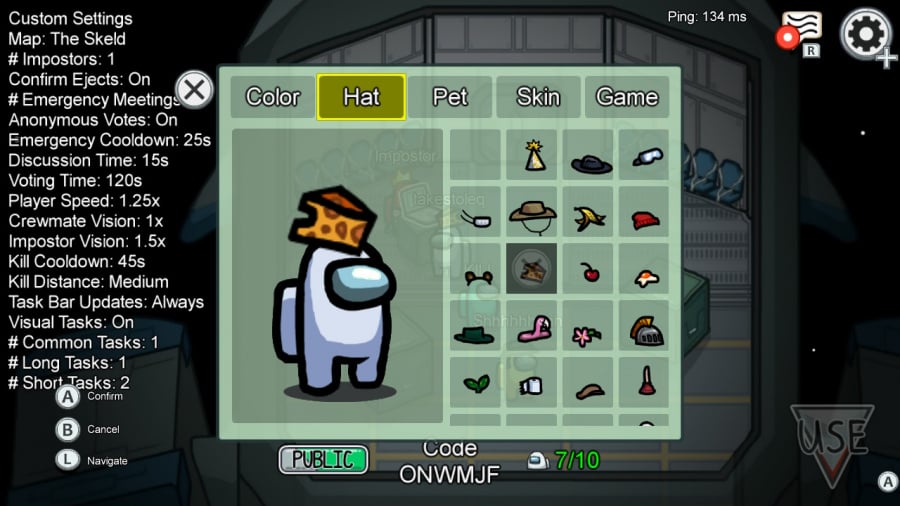 Elsewhere, however, the controls here have been well implemented, with the touchscreen making the various little task-based minigames a breeze to blast through. There are also gyro controls – useful for blasting away asteroids – but these, rather bizarrely, only currently seem to work in docked mode, an oversight which will hopefully be patched in the not-too-distant future.

Just like the PC version of Among Us, this port will set you back just a measly couple of pounds, a fee which sees you freed from the shackles of the free-to-play mobile version’s incessant advertising. However, it’s a shame that for now, this Switch edition is missing out on some content in the form of skins which players can use to customise their cute little avatars. It’s not a massive omission, and we’re sure these things will turn up in-game sooner rather than later, but it’s something worth noting if you’re deciding between this or the Steam version of the game.

Slight control niggles and missing skins aside, this is the exact same Among Us you’ll likely already know and love, packed full of the same addictive silliness that has seen it surge to massive popularity in 2020; this is a wonderful little indie multiplayer experience that’s a great fit for portable play on Switch and one of the year’s most compelling casual gaming experiences.

Among Us is an instantly accessible and super-addictive casual gaming experience that serves up some hilarious whodunnit hijinks in short bursts that are perfectly suited to portable play. There are a few niggles here with regards to controls that make communication fussier than it really needs to be, but this is a fine port that finally enables Switch gamers to jump in and see what all the fuss is about with this most unlikely of gaming sensations.