On Eivor’s second journey to the realms of Norse mythology in Assassin’s Creed Valhalla, they see Havi travel to Jotunheim in his effort to change his fate at Ragnarok. After securing gifts for the Jotnar chief Suttungr and his daughter, Gunlodr, Havi arrives for A Feast to Remember.

Odin’s goal is to steal Suttungr’s magical mead, which will help in his scheming. You’ll find Suttungr in the northwest corner of Jotunheim, where he’s patrolling outside his longhouse near the summit of the hill. 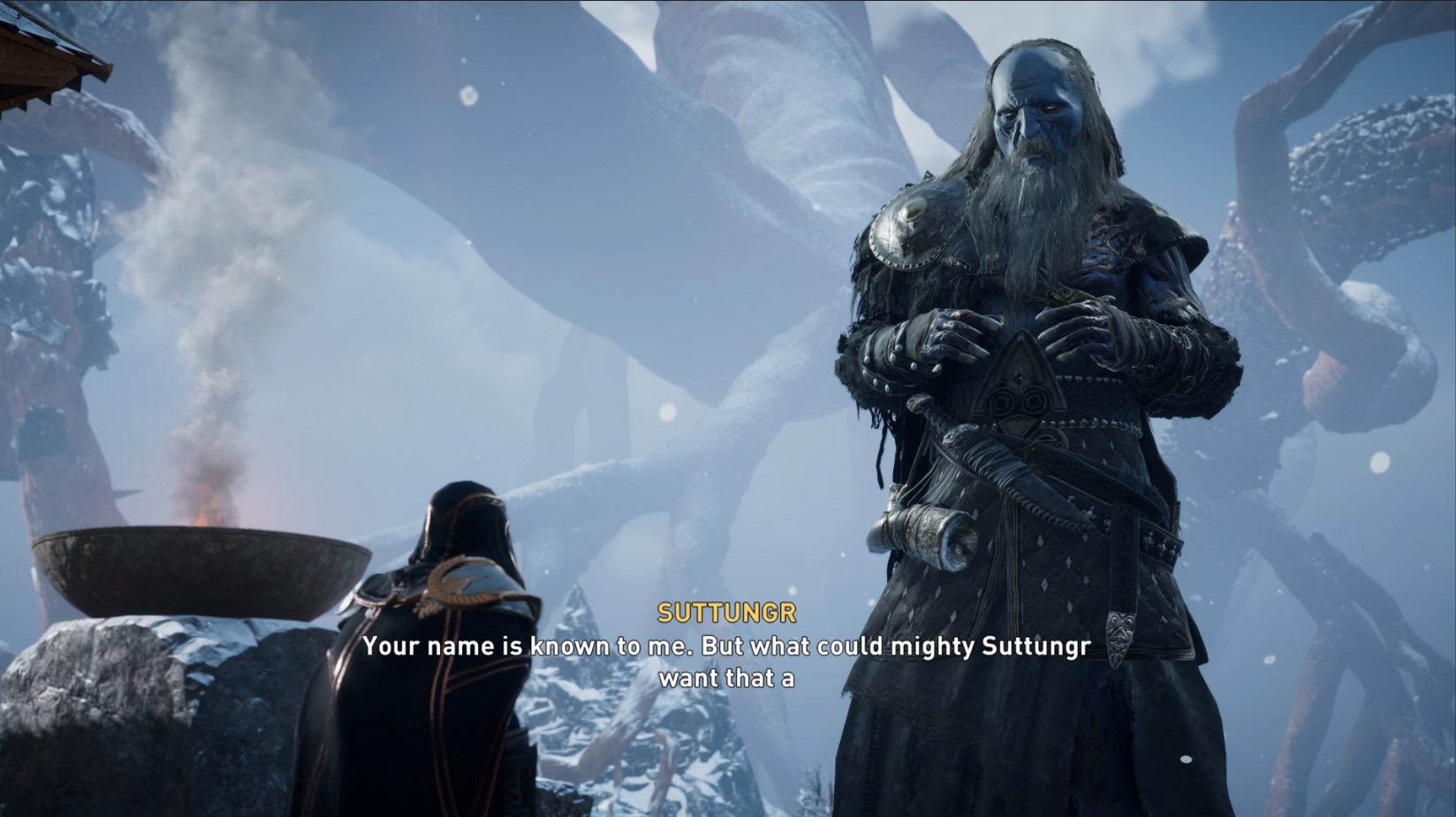 With your welcome earned, head off to find the Jotnar’s daughter, Gunlodr. She’s cooped up in her laboratory beneath a stone circle in town, over to the east. 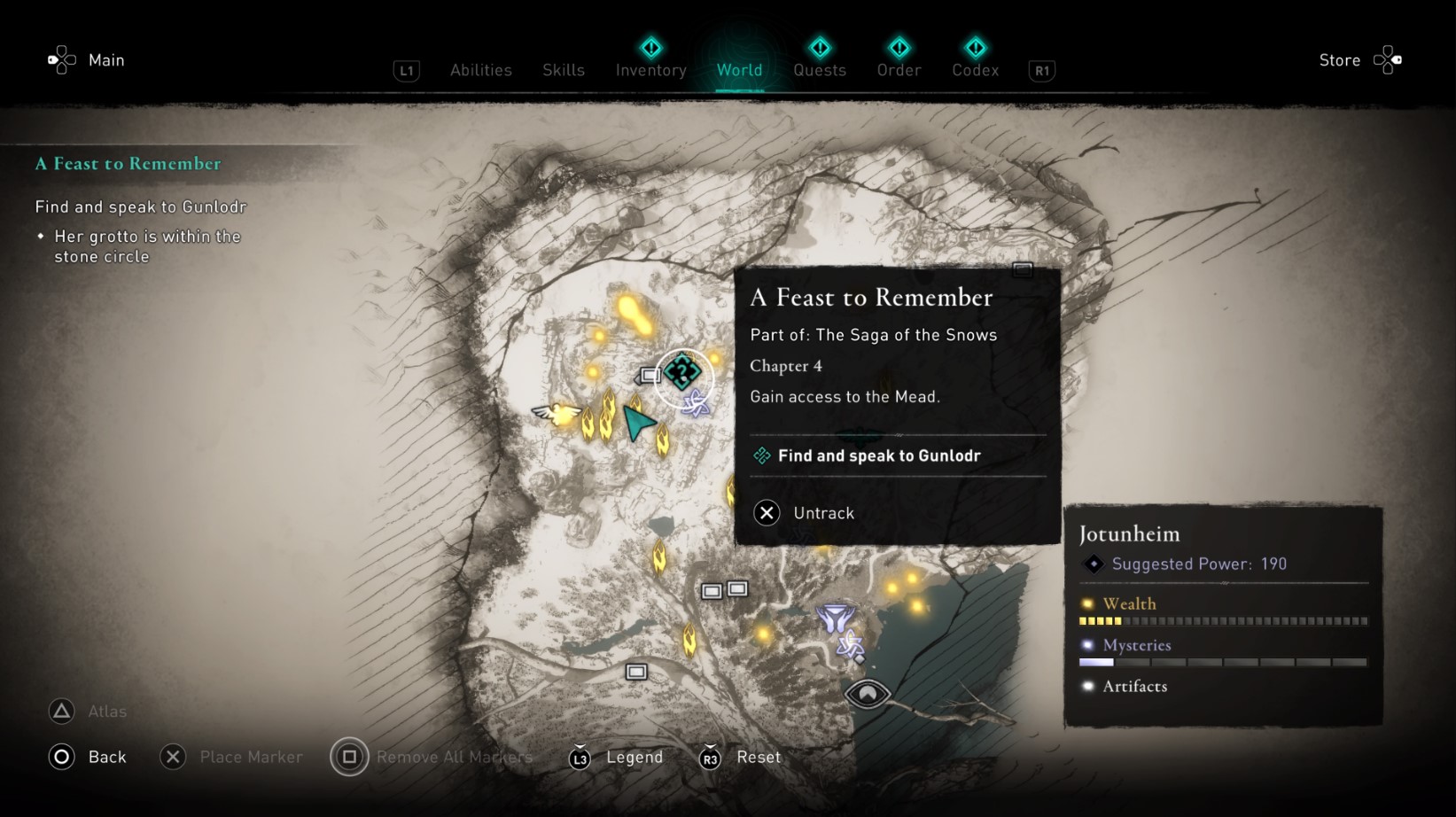 Approach the circle through the two pillars with deer skulls lashed to them to see the opening. 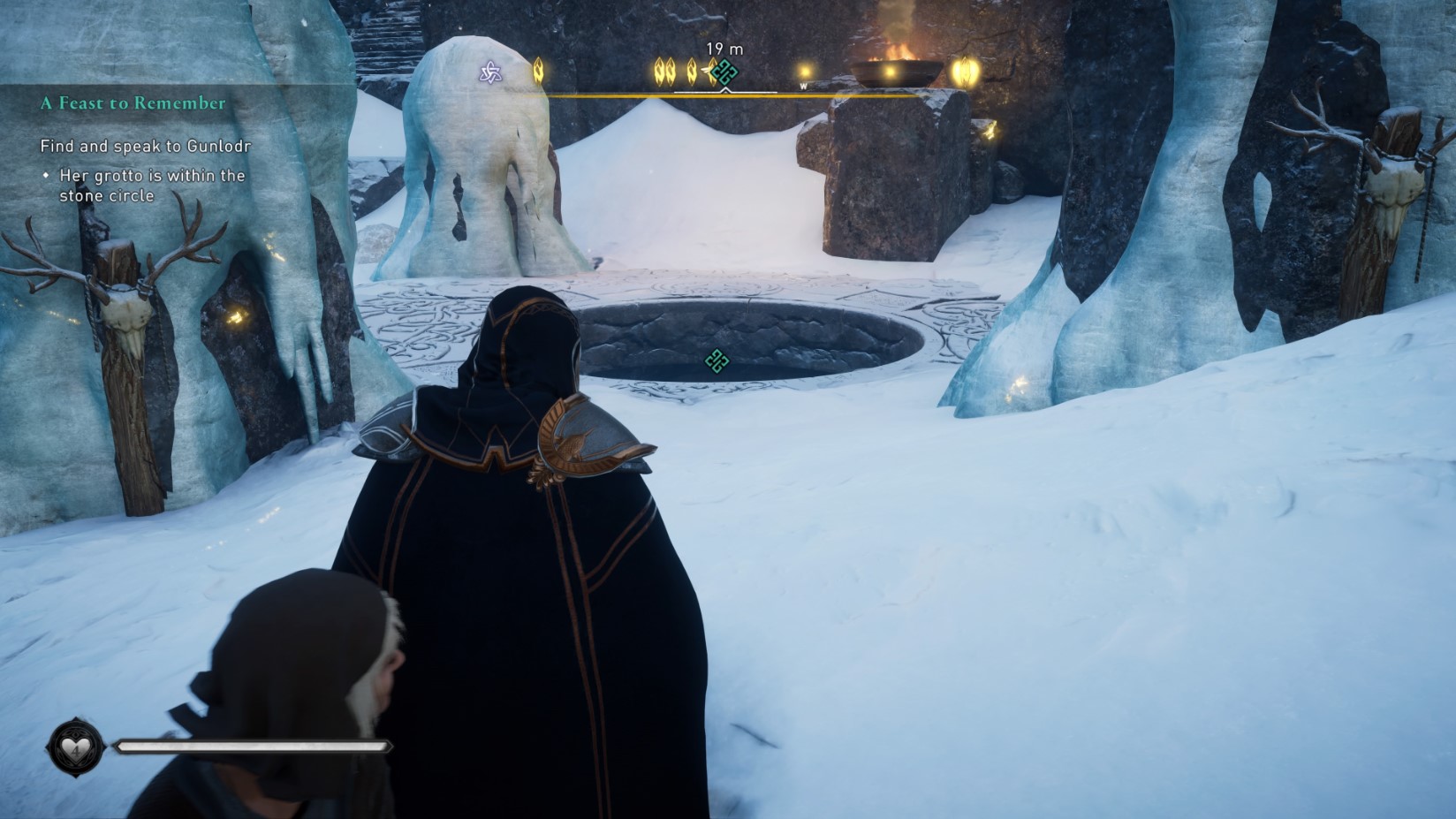 Speak to Gunlodr inside, and invite her to the party after talking to her about her work. Enjoy the easter egg at the end of the cutscene, then follow her back to the party and speak to Suttungr.

In your speech you have an opportunity to make a good impression on the assembled Jotnar and encourage them to drink more. When you’re presented with dialogue choices, they like the first option, then say that you respect them, and then tell them to go straight to drinking. 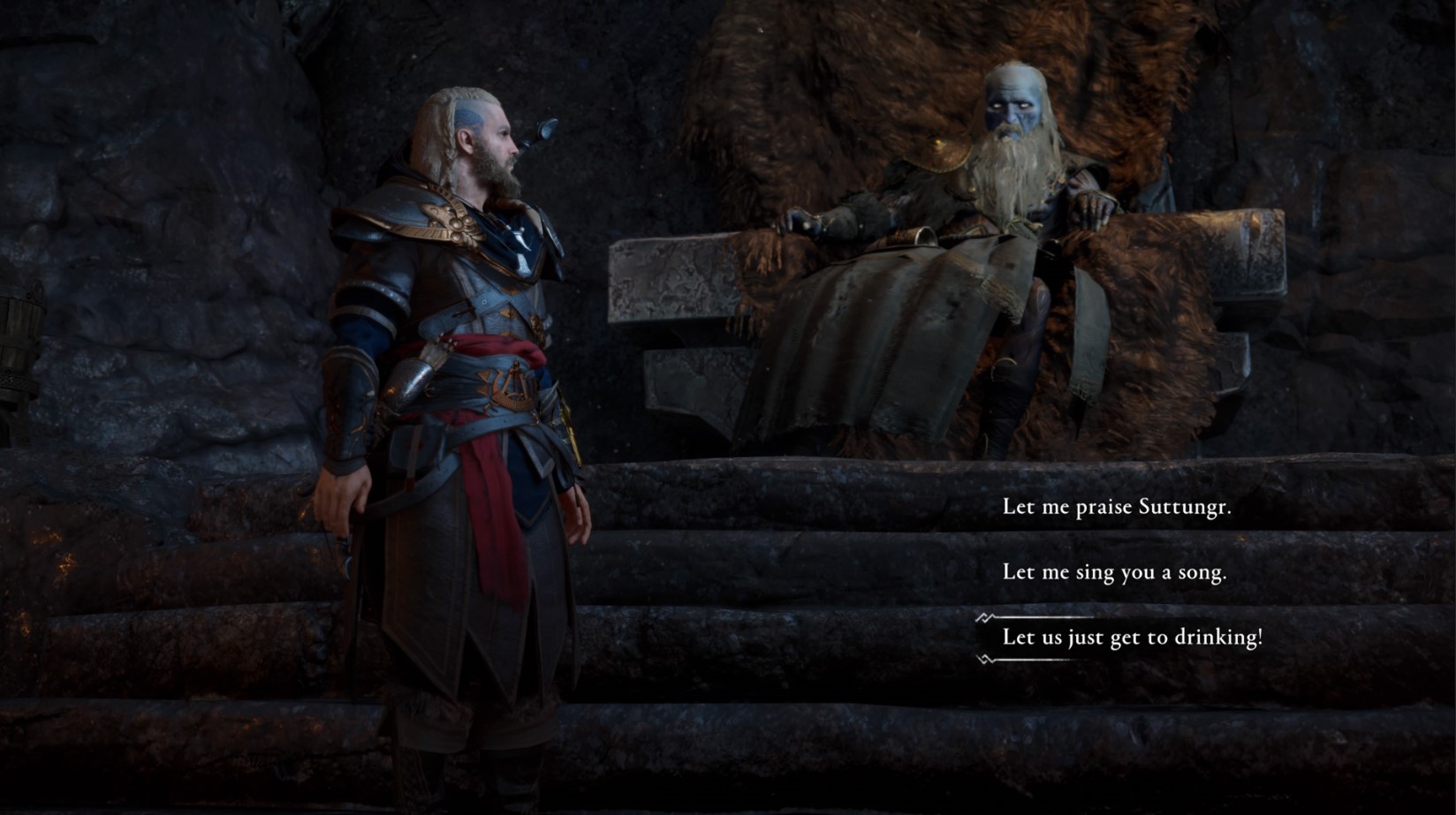 Havi will then remark to himself that the giants aren’t drinking fast enough to get Suttungr’s vault opened. Guild the guests into drinking more by speaking to the various groups.

From Suttungr’s throne facing outwards, you can see Gunlodr stood alone over to the left. 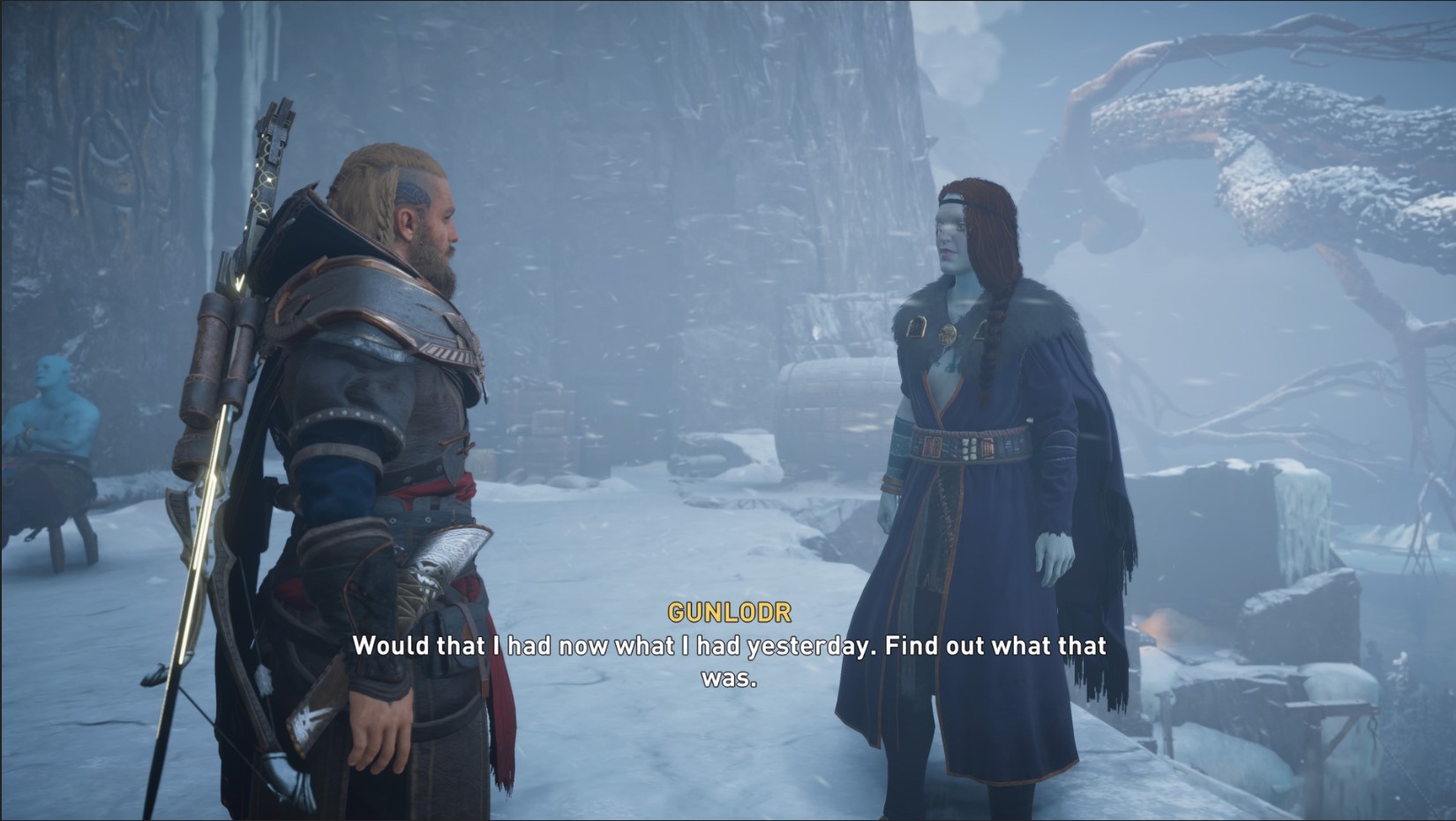 Speak to her and you can raise her spirits with some wordplay.

Correctly solving them all raises her spirits enough to sup a drink, contributing to your goal of draining the cauldron.

Next, you can Fist fight their champion on the right-hand side of the hall to have them drink more. It’s a very easy fight, so just focus on counter attacks. 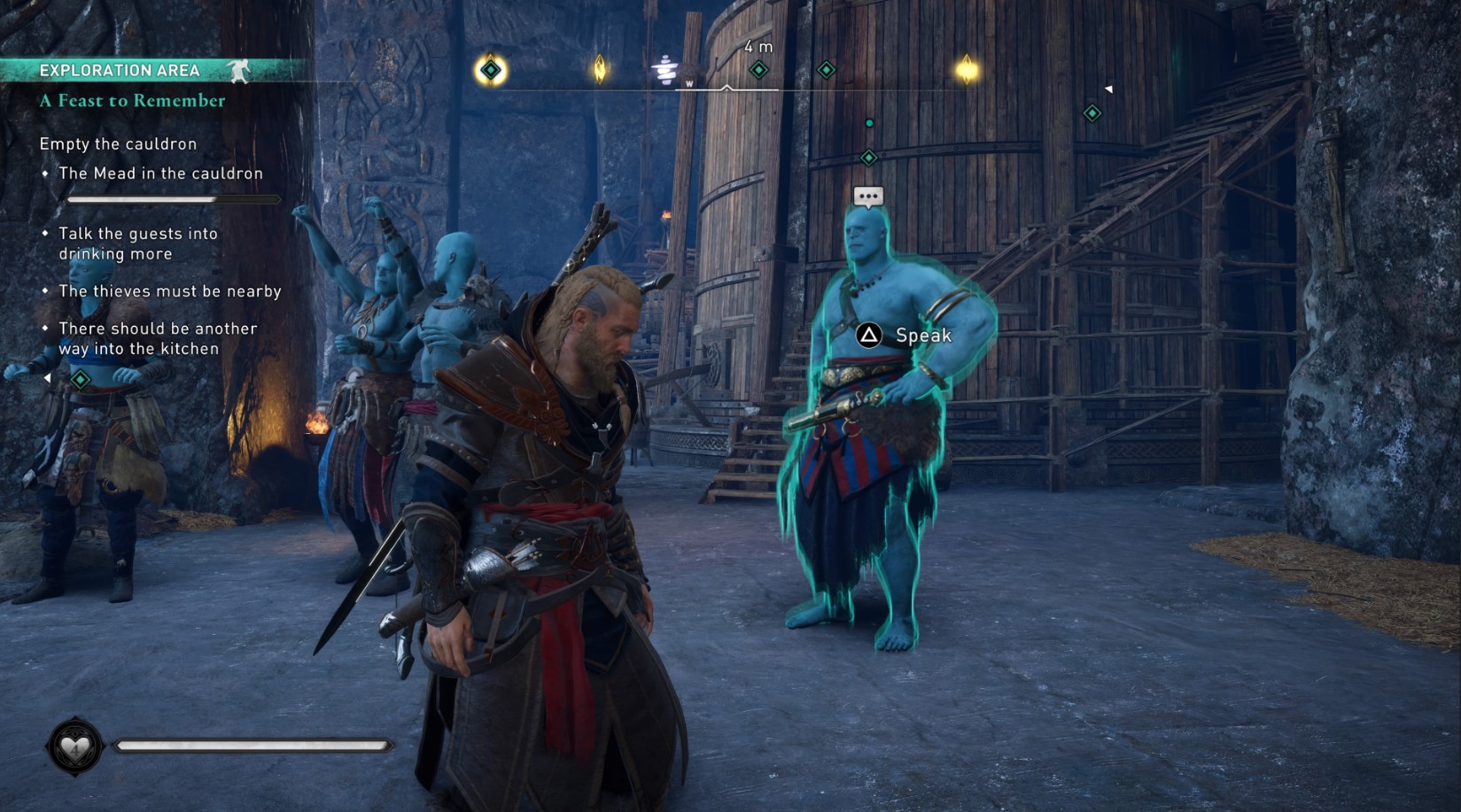 Then after that, you can speak to the musicians by the throne stage. They say some children stole their instruments, and you can find them around the rim of the mead cauldron. 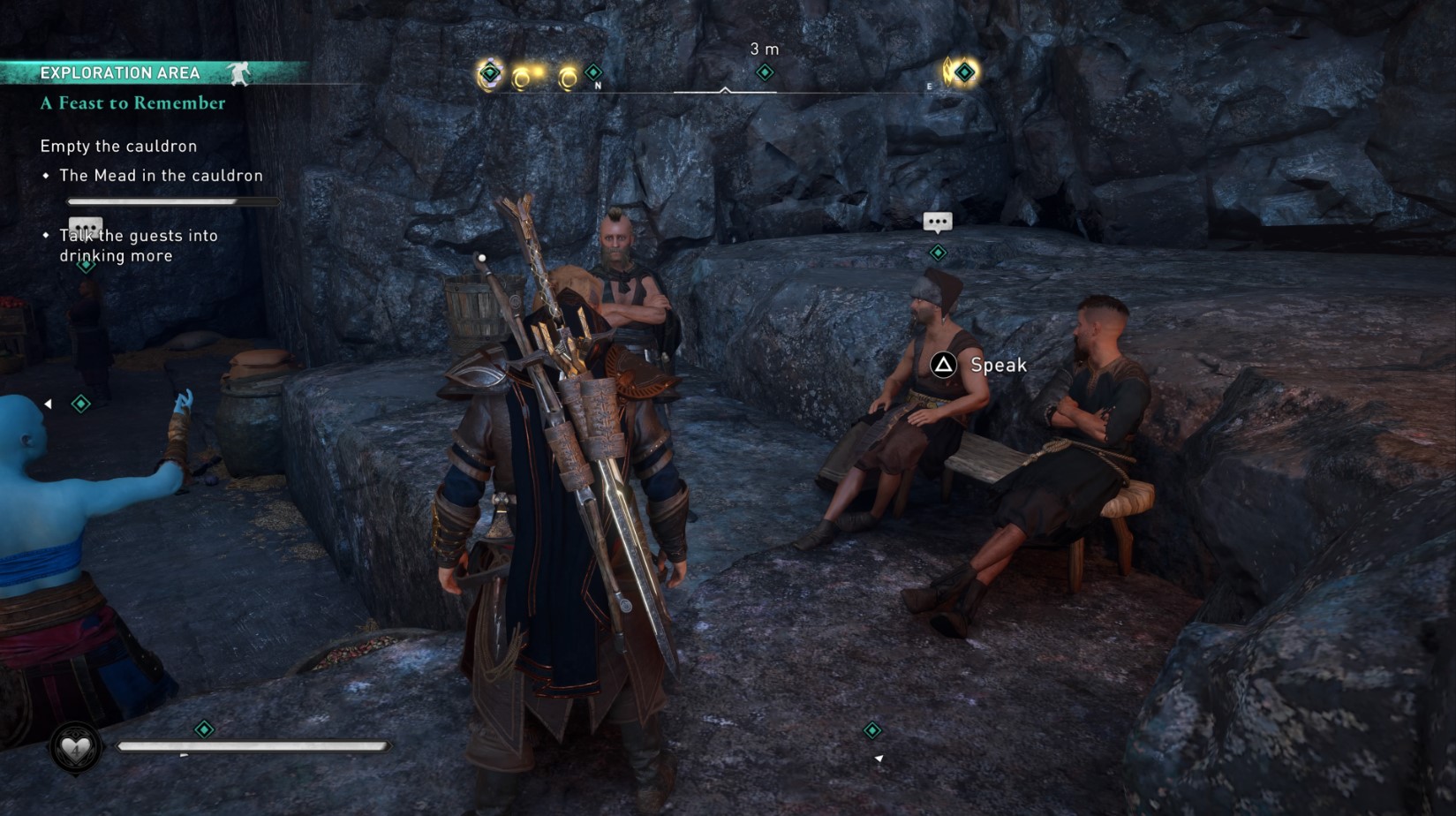 They ask you to climb up and dive into the bucket from high up, and return the instruments when you do. 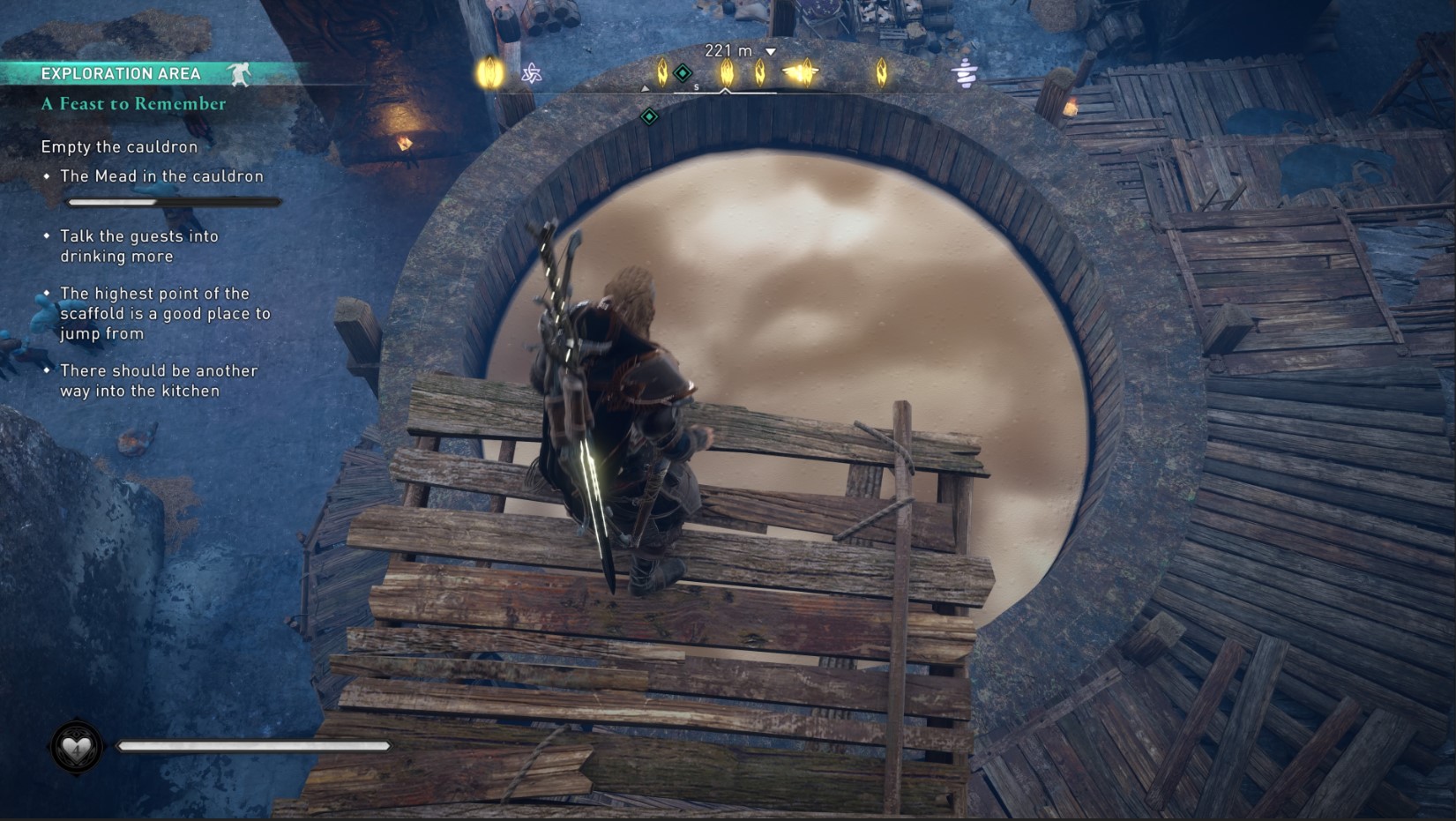 Finally, compete in the archery target challenge over on the other side of the hall and that’ll be it. Again, the archery test is very simple. 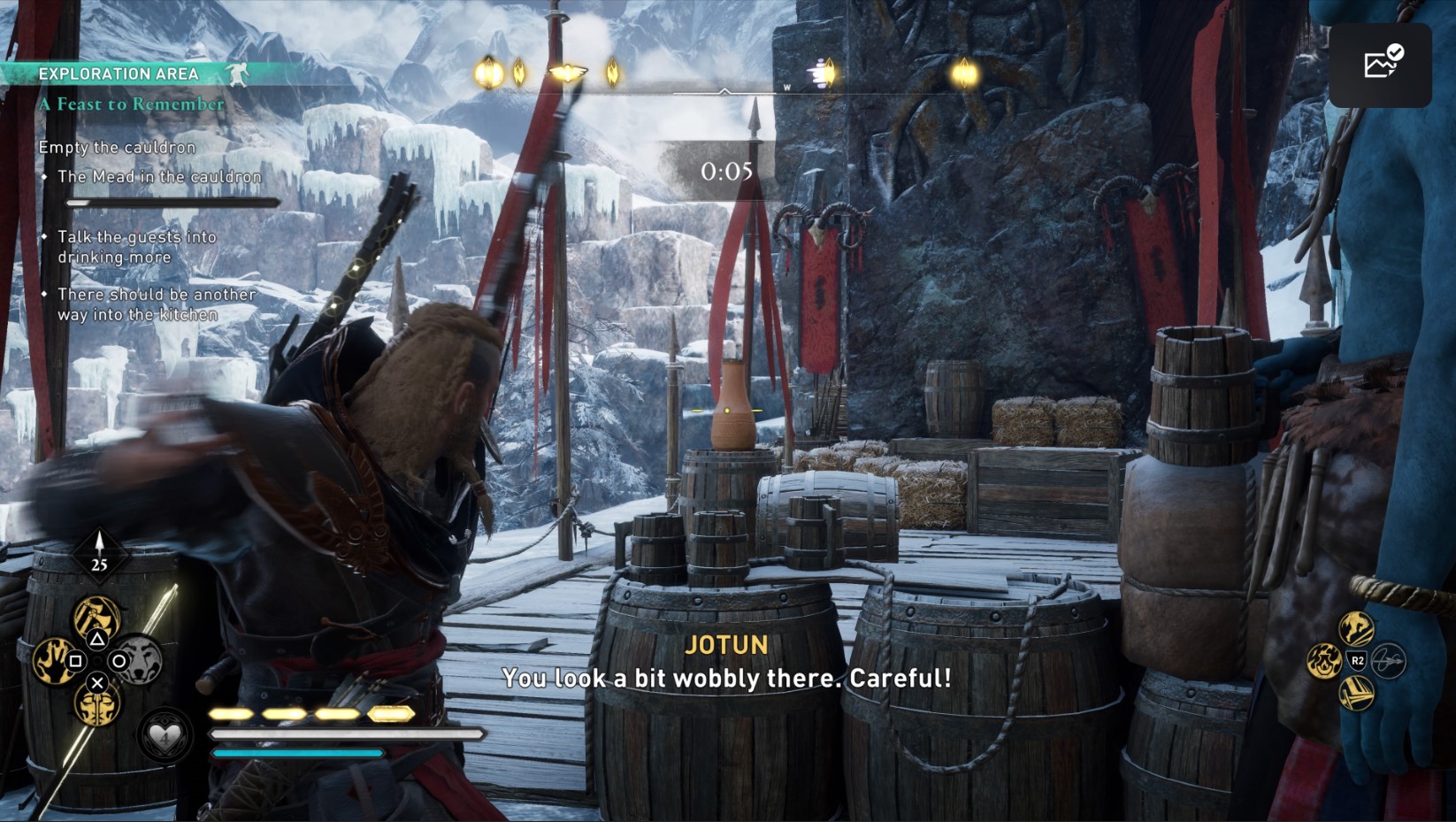 Speak to Suttungr, and inform him that his people have drained the cauldron dry of mead. He’ll instruct his vault to be opened, giving you the chance to sneak in and steal some magic mead for yourself.

Now look to the southwest and you’ll see the open door in the distance. Skip across the rooftops using the zipline at the edge of the party, then slip inside. 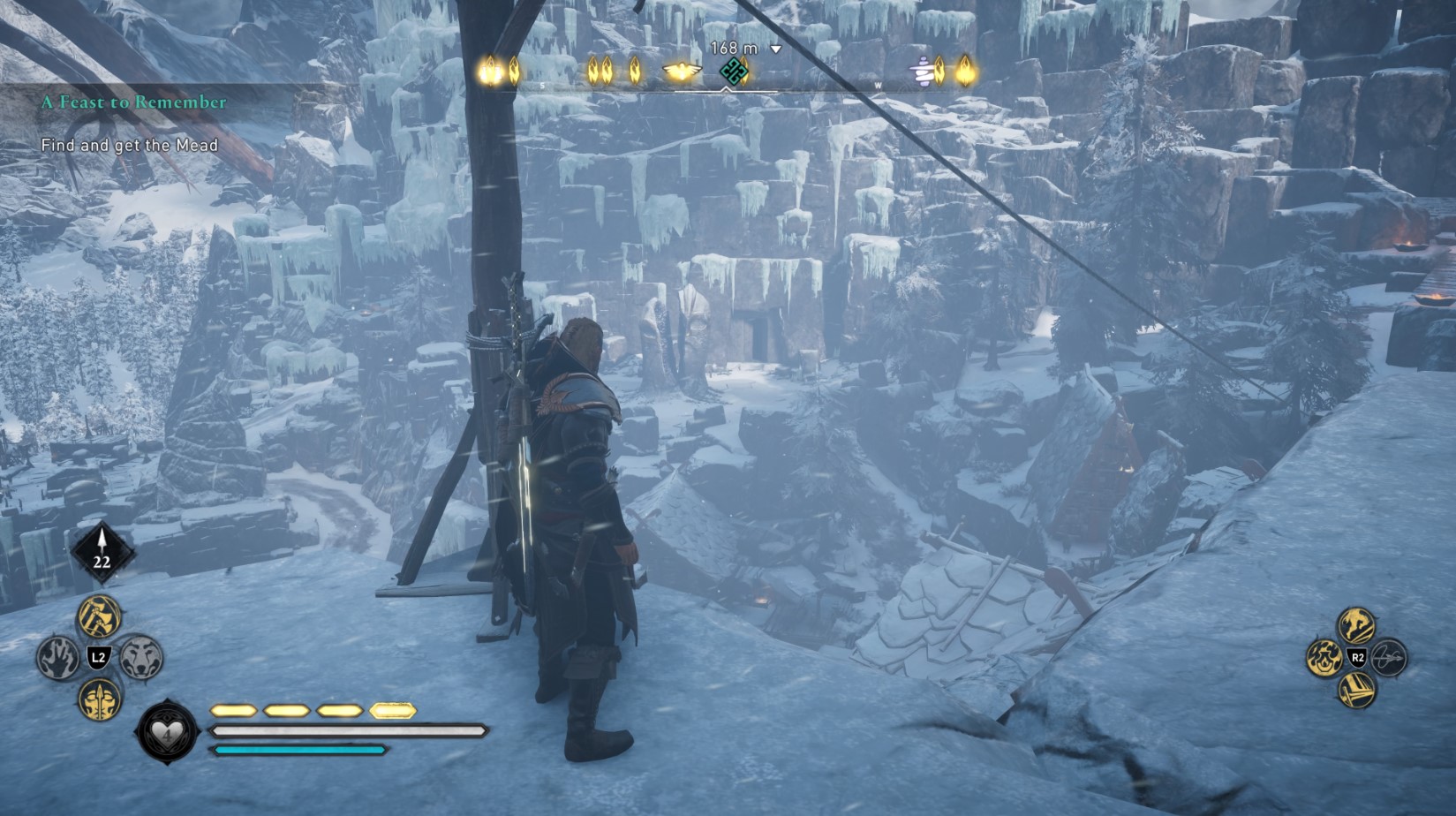 As you enter you’ll be stopped by Gunoldr. Now’s the time to deploy the gift you brought for her in the previous quest, the circlet Thor used to sneak into Jotunheim. 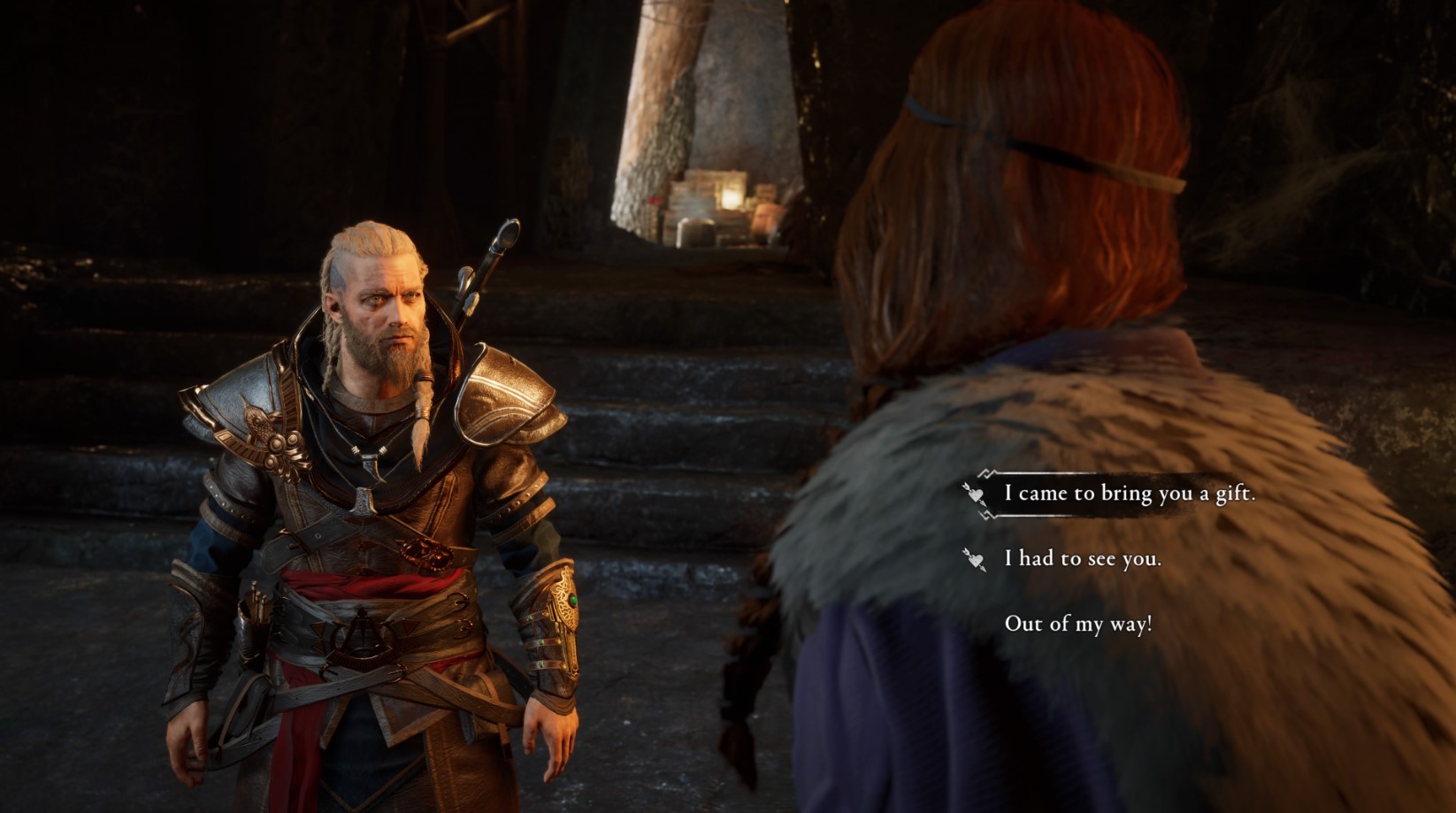 With your advances reciprocated, some Avatar love ensues.

With Gunlodr asleep, walk straight forward from where you regain control, up a small flight of stairs, and you’ll find the mead.

Interact with the horn, and you’ll have what you came for. Slink out of the vault back into Utgar. 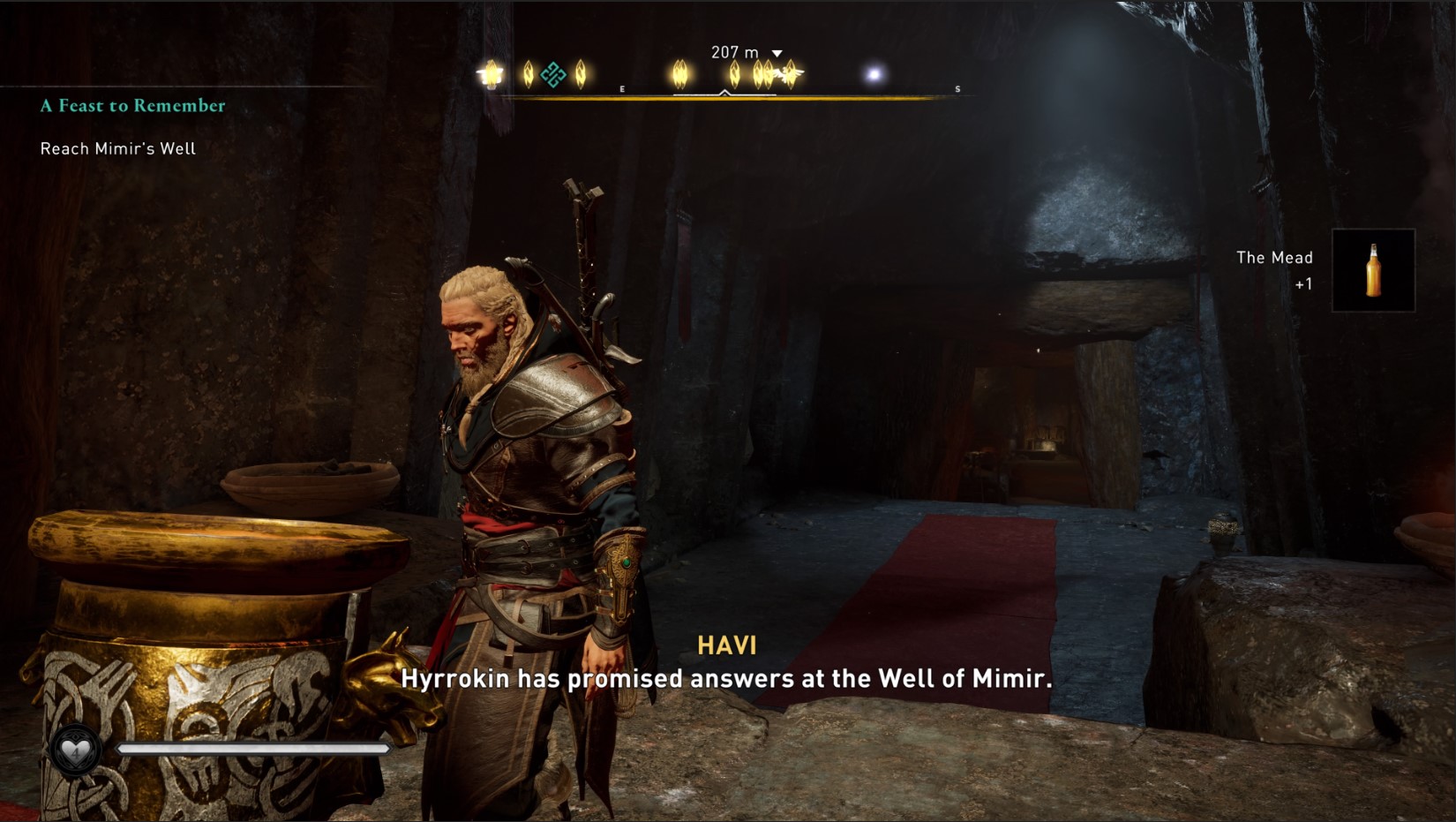 Before you can slip away however, you’re again betrayed by Loki, who’s foiled you at every turn.

You’ll likely be over-levelled in this fight with Suttungr, but there’s still some method to beating him.

Suttungr’s most dangerous attack, when he makes ice rain from the sky, can’t be blocked or dodged. To save yourself from harm, you need to take shelter inside the red runes you see on the floor at the corners of the fight arena. 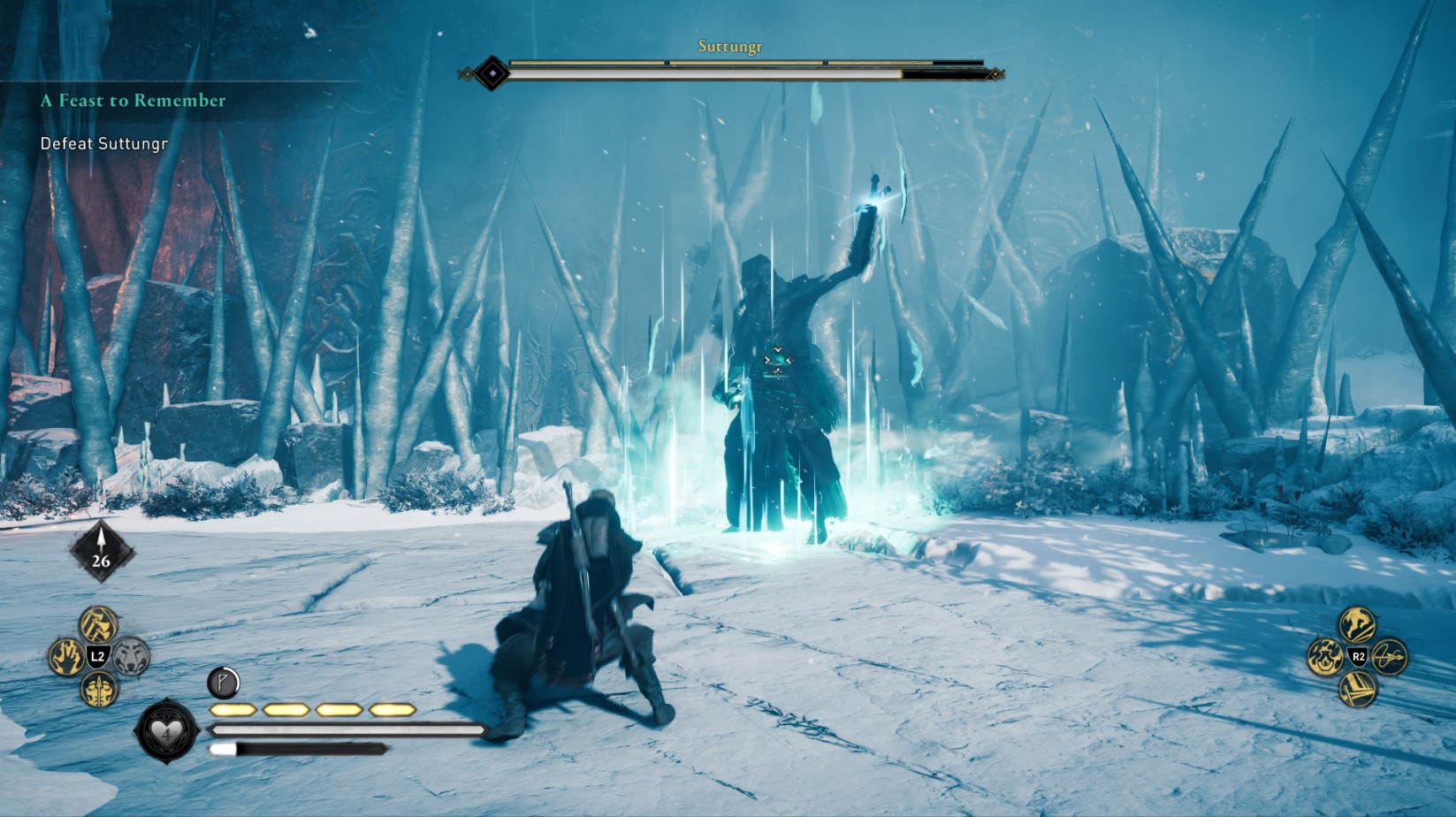 When Suttungr smashes the ground in preparation, run over to these spots. 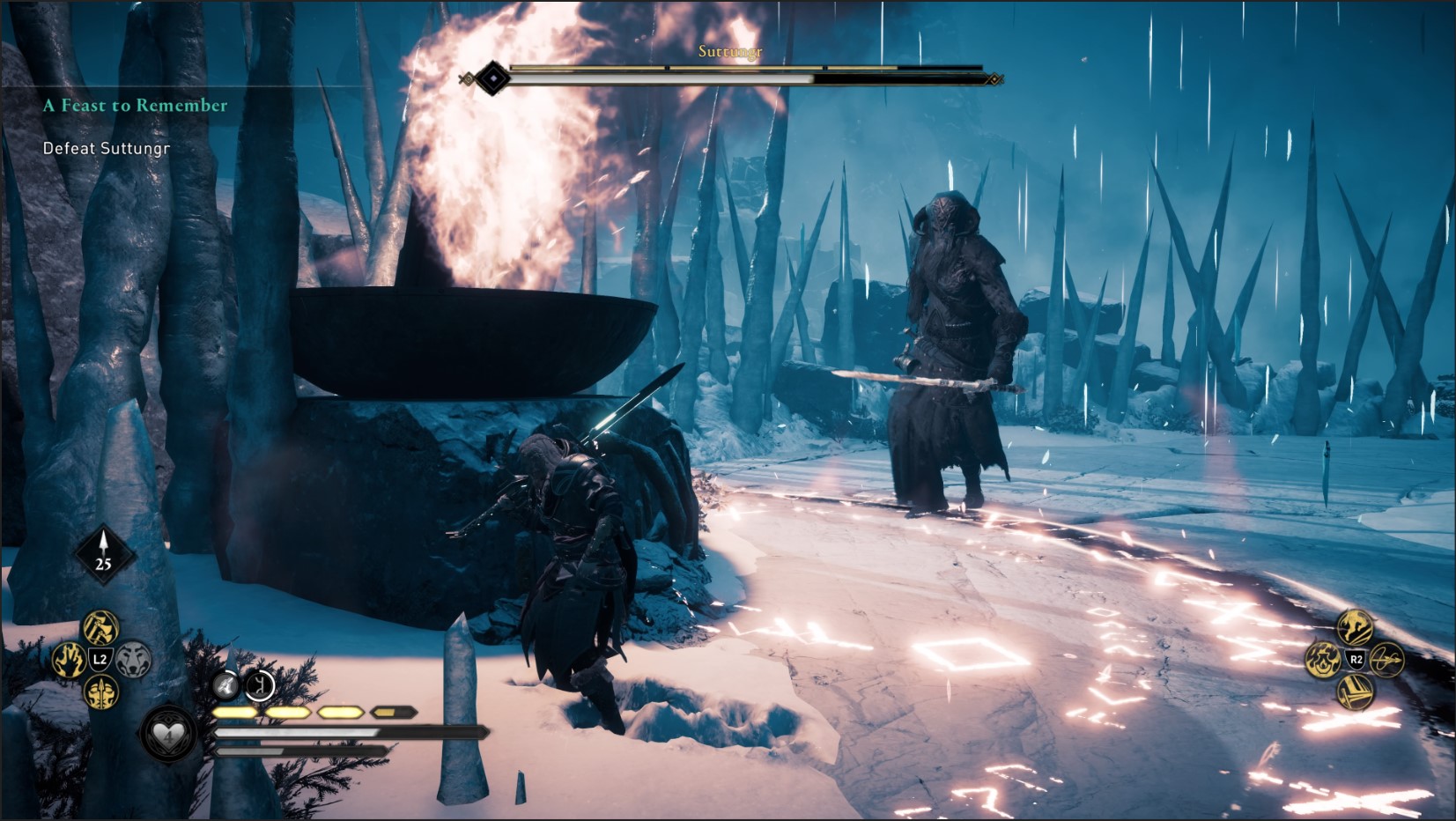 Aside from that, shoot his glowing weak spots, dodge backwards and to the side when he rushes to grab you, and stick in close to his feet and hack away.

Next, in the second phase of the fight when he grabs an axe, you need to dodge roll sideways out of the way of fast ice attacks that rush along the floor.

For more on Assassin’s Creed Valhalla, here’s our rundown of the best weapons for the early, mid, and late game.

Or if you’re more of a wordsmith, make sure to tick off Jotunheim’s Flyting match with Ratatosk. We have all the Flyting Answers, here.