Assassin’s Creed Valhalla Ravensthorpe | What should you unlock first?

Whether it’s the fortress of Masyaf, or the Villa Auditore, the Assassin’s Creed series has been home to some memorable bases throughout the ages. In Assassin’s Creed Valhalla, you plan your Viking invasion from the stronghold of Ravensthorpe – a budding town filled with useful merchants and fun distractions.

You can customise the look of your town by unlocking new statues and ornaments, but it’s the vendors, upgrades, and merchants who are the main draw to Ravensthorpe.

We’ll run down through some of the best town upgrades to unlock first for Ravensthorpe, as well as clue you into some of the more useful features that you might have missed.

The Middle Ages might not be known for its cosy and comfortable housing, but with a little effort and some specific attention, Ravensthorpe can quickly become a prosperous settlement.

Assassin’s Creed Valhalla will walk you through the basics of how to expand Ravensthorpe, with a quest that introduces raids and asks you to build the blacksmith.

The actual building is pretty easy. All you have to do is find a sign near a tent, click on it, and submit the required materials you need to construct it. You can use your bird, Synin, to scope the town from above and see what construction options are available if you prefer that to running between tents like a lost festival goer. The game will take over once you confirm the construction and you’ll be rewarded with a small cutscene showing off the new building like its being featured in Grand Designs.

Getting the materials might not be as easy though. You need two types of materials to get a building under way: the generically named Supplies and Raw Materials. You can sometimes find a small cache Supplies hidden in smaller chests dotted around the map, but if you want larger piles of building materials, you’ll have to go on a raid.

Good thing you’re a Viking then. To raid, all you have to do is jump on your longboat, sail down the rivers and coasts of England, and look for the red crossed axes and swords on your map and compass. Here you’ll be launching a pitched battle against the guards of the monasteries you’re ‘borrowing’ some supplies from. You’ll see the Raw Materials as golden barrels on the map and compass to help you find them in the chaos, while Supplies are found in the smaller chests and boxes.

Use your Odin’s Sight by clicking down the analogue stick to see the chests highlighted in gold. 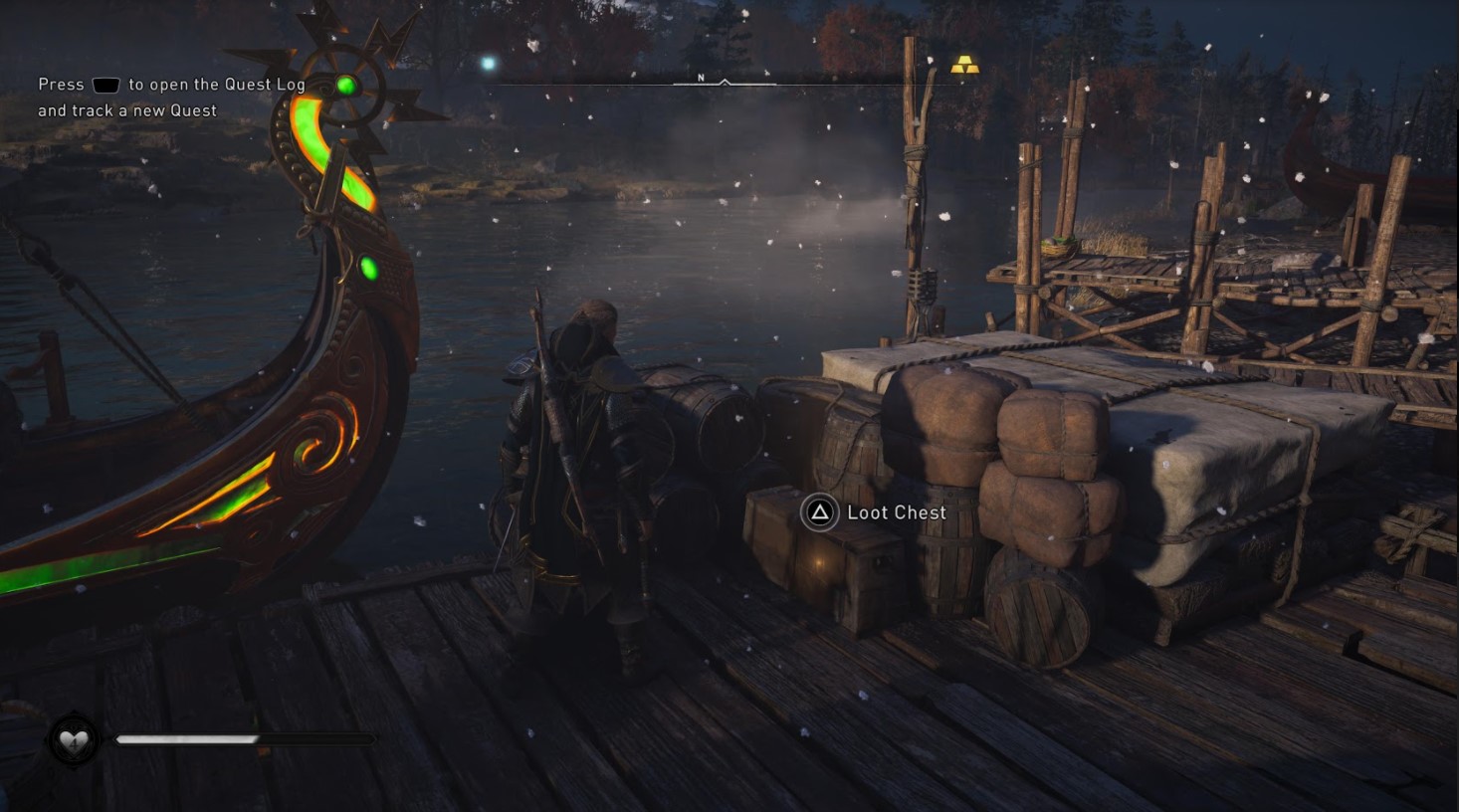 Once you’ve gotten all the Supplies and Raw Materials you need, you can build whichever amenity takes your fancy, with more building options added as your Ravensthorpe grows. You can raise your town level by building more huts in your settlement, but also by forging alliances in the game’s main story.

It’s entirely your choice where to go from here, but some buildings are more useful, interesting, or important than others.

For example, some add extra quests of varying sizes, while others don’t do any more than increase your feast buff – a small bonus you can give Eivor by ringing a bell at the longhouse – but the game can be a bit vague on the specifics. So I’ve written a handy list of the most important buildings Ravensthorpe has to offer, in the order of which might be best to unlock first.

Assassin’s Creed Valhalla Ravensthorpe – What should you unlock first?

This should probably be the first thing you want to construct with your leftover Supplies and Raw Materials. The purpose of this building is in the name, and you’ve already met the Hidden Ones during the main story. With the bureau built, you’ll have access to the Order tab in the menus which unlocks a bunch of side quests and assassination targets as you continue the your adventure. You’ll also be rewarded some skills for handing in the medallions you’ll get off your victims, which you can track down with our full Order of Ancients guide, here.

Second on your list should be the Trading Post. This building is, unsurprisingly, the shop for the town. With this installed in Ravensthorpe, you’ll finally be able to get rid of all the trinkets you’ve been carrying around, as well as buy weapons, runes, and upgrade materials as well. While the things you buy from shops usually aren’t that great, in Assassin’s Creed Valhalla, you can get some of the game’s best early weapons for a relatively cheap price. 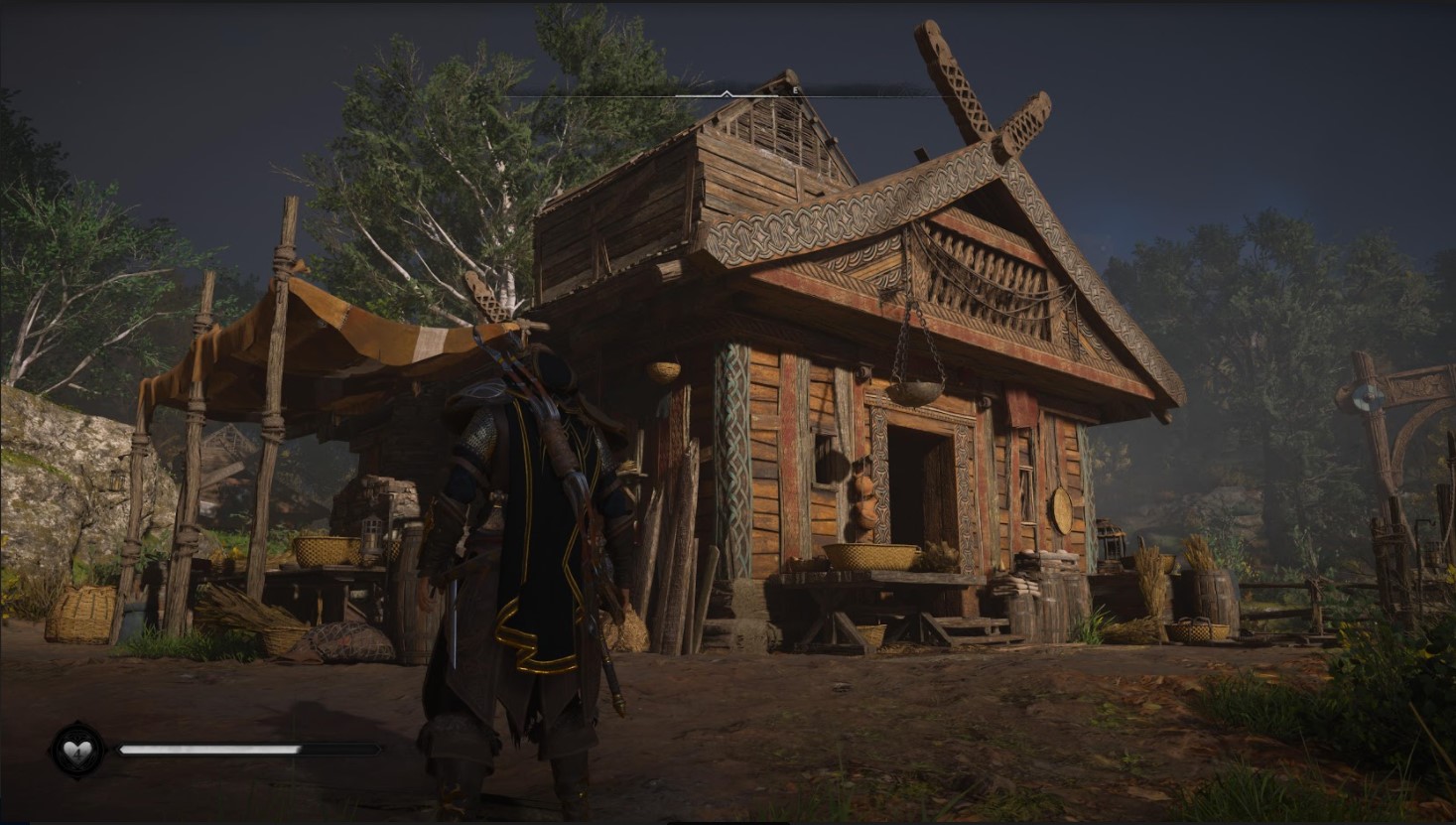 It might not seem as important, but trust me when we say the Stable and Aviary is an essential choice in Assassin’s Creed Valhalla. While customising your horse and bird is fun, the actual reason you’ll want to get this nice and early is for the training available. At the Stable and Aviary you can pay to have your horse trained, allowing it to swim and sprint for longer. Having a swimming horse is an incredible timesaver when England is so crisscrossed with rivers and streams, and drastically reduces the annoyance of exploration on horseback.

Ever wonder why Assassin’s Creed Valhalla categories some junk as trinkets and others as trade goods? Well this is why. Some buildings, once constructed, will allow you to trade specific items for specific rewards. The easiest of these to fulfil is the Hunters Hut, that asks for several items that come from dead animals. The rewards you’ll get for completing sets are mostly runes, cosmetics, and upgrade material. There’s also a handful of quests that are tied to the hunters that live in this hut, making it even more interesting to purchase early.

This is also where you take the trophies from Legendary animals like the Elk of Bloody Peaks.

Remember in the Prologue when you went to the Seer, took some drugs and had a weird dream? Well you’ll want to do that again. This hut near the waterfall behind the longhouse allows you to explore Eivor’s visions with new quests, but you’ll want to discover exactly what happens with them for yourself.

Take this one with a pinch of salt, and a little vinegar too. The fishing hut allows you to access the fishing line that you’ll need to catch fish. It’s not the most interesting addition to a game that normally has you raiding churches and killing kings, but like the hunting hut, there are some decent rewards to be had. More importantly, if you’re looking to scrub the mysteries from the world map, you’ll need the fishing line to complete some of them.

In the same vein, the museum lets you finally trade in those Roman relics you’ve been carrying around. The rewards you’ll get are various statues you can erect around Ravensthorpe, which adds a little classical beauty to the Viking town. And the slightly odd proprietor of the Museum also gives you a Lunden based side quest as well. 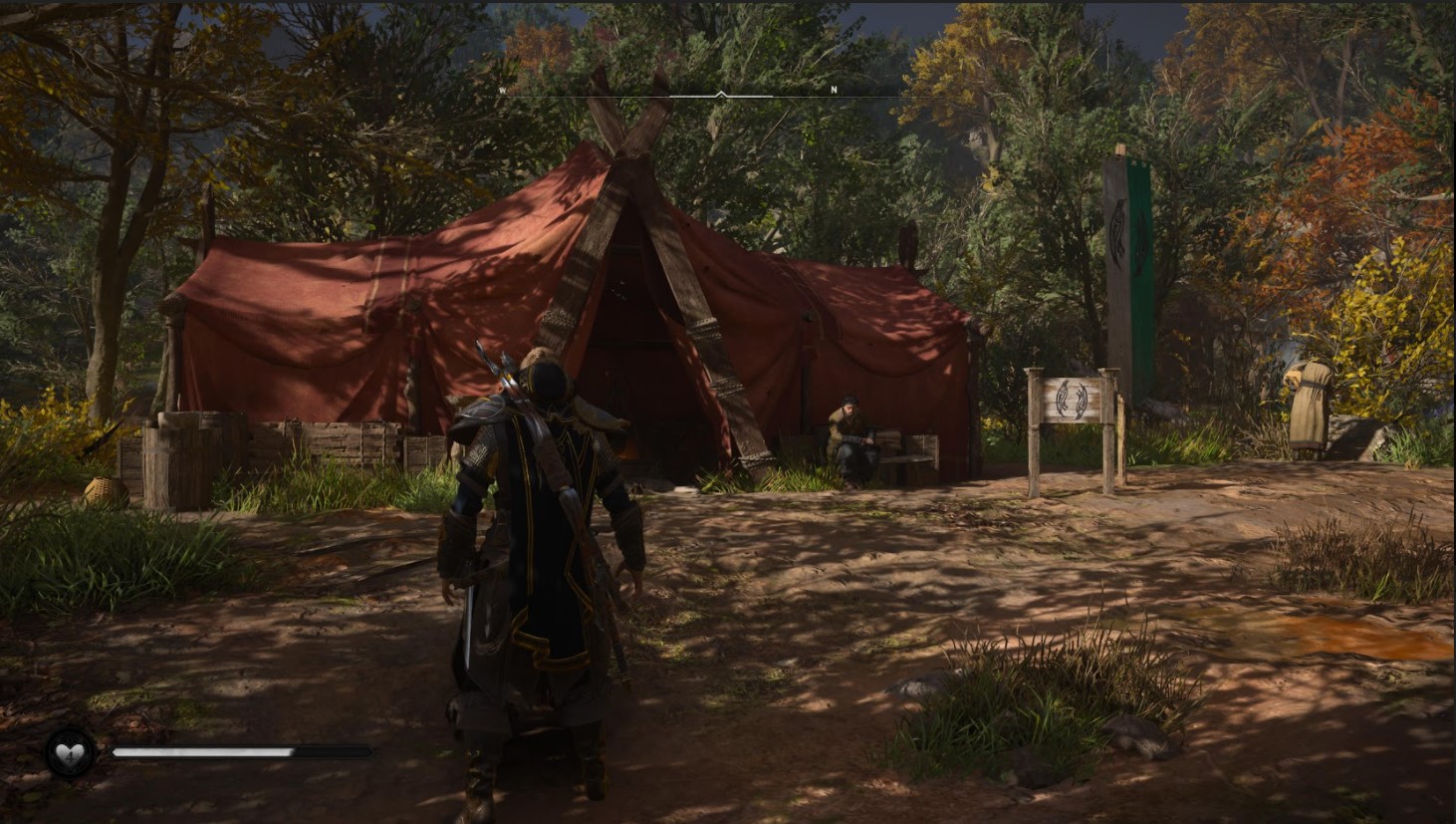 The next few buildings don’t offer much mechanically beyond cosmetic changes, with the tattoo shop offering the same services you might have found already in Norway. By now you’ll probably have found a few new tattoos and hairstyles though, so it might be worth getting it built so you can take a look. Don’t forget you can buy cosmetic schemes from the Trading Post too.

The Viking barracks allows you to make a Jomsviking, your battle hardened sidekick that will ride and die with you in all future raids. The barracks doesn’t add much else, although you can customise your raiding crew if you feel like it, and you can occasionally earn a few silver coins if people hire your Jomsviking for their own raids as well.

Like the Tattoo Shop, there isn’t much to the Shipyard beyond the cosmetics you can apply to your longship and crew. But you might have picked some up new designs by the time you build it, or at least, you might want to buy some from the Trading Post to liven up your river cruises.

Important mainly to completionists, the cartographer sells maps to treasure you have missed on your journey. Unfortunately he doesn’t seem to sell the location of the more elusive artefacts, but its still something if you’re desperate to clear the map. Or you could always use our maps of where to find every piece of gear, here.

There are a bunch of other buildings you can erect, but they don’t actually do anything except improve your feast buff. Once you’ve got Ravensthorpe up and running, you can ring the bell by the front door of your longhouse and call a feast. This will give you a temporary buff, that can be augmented and improved by building the following buildings: the Bakery, the Brewery, Hunwald and Swanburrow’s House, Kari’s House, Mayda’s House, the Cattle Farm, the Grain Farm, and the Fowl Farm.

The farms need to be upgraded several times until they are fully complete, each one using more raw materials and supplies, but stacking their feast buff in the process. There’s also a small questline when you build the bakery as well.