Business is Booming with MegaCorp, the Latest Expansion for Stellaris: Console Edition

The time has come for you to stake your claim in the galaxy with an exciting new expansion for Stellaris: Console Edition. I’m so excited to tell you about MegaCorp, the latest addition to Stellaris: Console Edition’s third expansion pass. This new entrepreneurial focused expansion adds a litany of business focused features for all of you budding tycoons to implement and it’s available now on the Xbox Store for Xbox One and Xbox Series X|S.

MegaCorp introduces you to a variety of new tools that will help you become Stellaris: Console Edition’s next Elon Musk or Andrew Carnegie. Start up a private enterprise, and work your way to controlling (or even replacing) the role of the State.

Feel like you’re better suited to the black market than the world of traditional business? Then control a Criminal Heritage MegaCorp, an intergalactic crime cartel that has decimated and taken jurisdiction over all local governments. Or maybe you’re more of a cult figure, in which case you can use your charisma to indoctrinate your Spiritualist Ideology across the galaxy as the leader of a MegaChurch. Regardless of your tactics, space-capitalism is all about winning – at any cost.

We’ve added a host of new civics centered around the corporate culture of your empire. These new principles will allow you to conduct business on a galaxy wide scale, wheeling and dealing your way to utter domination.

MegaCorp will also allow you to build a Ecumenopolis, or a planet wide city. Use these city worlds to increase the population density, up to a point that you are quite literally “too big to fail”. You needn’t even limit yourself to one world – spread your megacity to multiple planets, and bully your galactic neighbors into subservience. While you’re traversing the galaxy to network your way up the corporate ladder, you’ll need to look out for fleets of roving Caravaneers. These pesky, nomadic traders walk the fine line between charming salesmen and flat out scammers, staying aloof of galactic politics. If you ask me, you’re best off avoiding deals with them altogether – but if you must visit one of their home systems, just know that their goal is to take you for all that you’re worth.

In addition to all of these new gameplay features, we’ve added new Ascension perks, more Megastructures, 3 additional advisors, and 4 new music tracks for you to enjoy as part of MegaCorp. Think what you have what it takes to make it in the world of big business? MegaCorp is available now for purchase via the Xbox Store for Xbox One and Xbox Series X|S. We’ll see you amongst the stars! 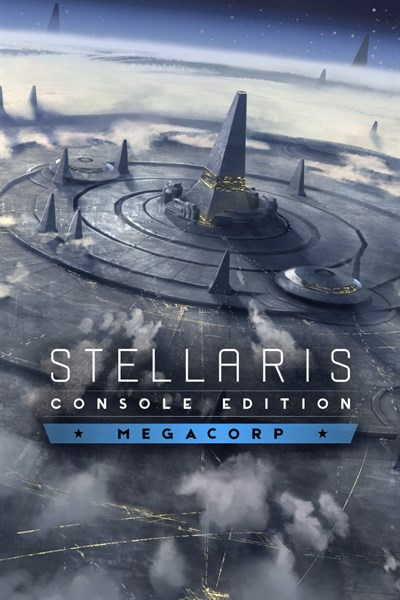 MegaCorp is an expansion pack for Stellaris: Console Edition, which has players ushering in an era of prosperity and profit on a galactic scale. In this economy-focused expansion, players can become the CEO of a powerful corporate empire to expand operations across the stars.

Corporate Culture: Chief Executive Officers of a MegaCorp can conduct business on a galaxy-wide scale with a host of new civics. By building Branch Offices on planets within empires they have trade agreements with, the MegaCorp can add a portion of the planet’s Trade Value to their own network. Using the new Corporate Authority, construct an economic powerhouse and dominate galactic trade – for a brighter future.

Caravaneer Fleets: Keep an eye out for the Caravaneers, nomadic interstellar wheelers-and-dealers who stay aloof from galactic politics, and always have a bargain up their sleeve. Expect surprises when these master traders wander through your space or when you visit their home systems.

More Megastructures: Budget has been approved for your own glorious Matter Decompressor, Mega-Art Installation, Interstellar Assembly or Strategic Coordination Center to acquire new scaling capabilities for your megalopolis.

Galactic Slave Market: Buy and sell pops on an industrial scale, set them free or keep them as livestock. The choice is yours!

VIP Status Comes with its Perks: Keep your economy competitive in a cutthroat galaxy with additional Ascension perks!