The content just keeps on coming for Call of Duty: Black Ops Cold War as Activision announces more maps and modes will be added to both multiplayer and Zombies in February. Firebase Z is the new location for Zombies while Call of Duty: Black Ops 2 map Express returns in Black Ops Cold War on 4th February 2020. If you’re looking for something new right now though, Sanatorium is live as we speak — a multiplayer map housing 40-player bouts!

New modes are also on their way, including Dropkick and Snipers Only Moshpit. Then Call of Duty: Warzone players have Buyback, Armored Royale, Mini Royale, and Rumble to look forward to. There’s so much content to get excited about that luckily this handy infographic sums everything up nicely. 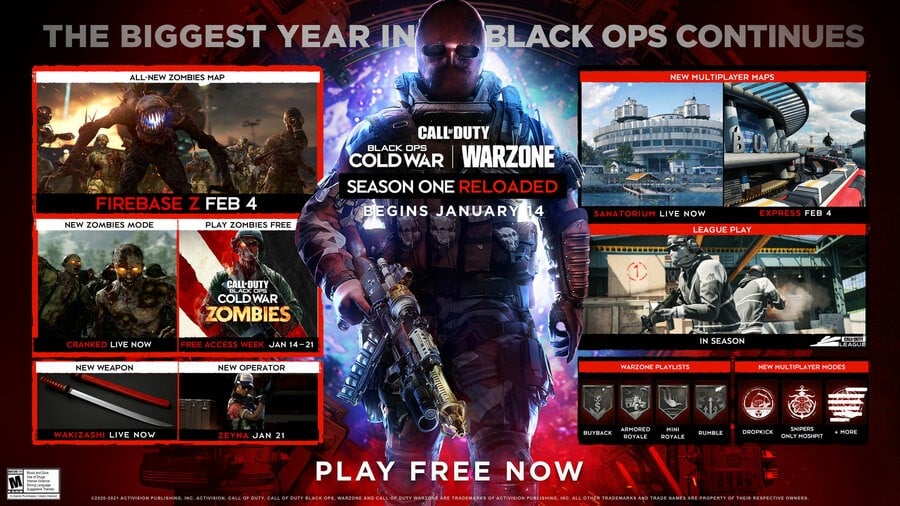 Furthermore, there’ll be a new Operator to play as named Zeyna from next Thursday, while a melee weapon called the Wakizashi is live in the game right now. That’s a sharp blade primed to slice and dice. Don’t forget that if you don’t own Call of Duty: Black Ops Cold War, you can play the Zombies mode for free for a week, which now includes the new Cranked mode. That’s a lot of stuff to keep you going until Season Two rolls around.

Bloodstained: Ritual of the Night gets a free Classic Mode addition in new update

Rumor: Switch getting Pokemon Diamond and Pokemon Pearl remakes in 2021, reveal in February

Rumor: Switch getting Pokemon Diamond and Pokemon Pearl remakes in 2021, reveal in February