All good things must eventually come to an end, and such is the case with Cyberpunk 2077’s adventures in Night City.

You might be surprised how quickly you reach the ending: compared to The Witcher 3, Cyberpunk 2077’s point of no return for the main story comes quite soon. It’s easily possible to finish the main story in a little over 20 hours – but it’s not designed to be binged that way. Cyberpunk has more side content, and it’s more in-depth – so you’re meant to meander off and explore those story-lines in depth.

This page will naturally contain HUGE STORY SPOILERS for Cyberpunk 2077. Don’t scroll any further unless you want to see them.

Cyberpunk 2077 Ending Explained: how many endings & how to get them

As far as we can tell so far, the endings in Cyberpunk 2077 have a few different paths. We detail all in-depth below, but we’ll describe them briefly and as spoiler-free as we can here:

Side with Hanako: take up Hanako on her offer
Get Rogue’s Help: let Johnny take over your body and go to Rogue for help
Call the Aldecaldos: if you’ve completed their side quest, get the help of the Aldecaldos Nomads
Refuse: give in, and end things on your own terms
Secret Ending: take Johnny up on his hidden offer

What happens after you complete Cyberpunk 2077? Is there a New Game Plus?

Once you finish the final mission of Cyberpunk 2077, you’ll be given the opportunity to load up your save from the moment right before you pass the point of no return and kick off the final series of missions.

You will, however, get to keep some goodies and bonuses based on the ending you see. These will be available to you immediately after reloading that point of no return save game. Sometimes these are weapons or gear attained during the final mission. Any Cyberware obtained this way will have to be installed by a Ripperdoc, remember.

The developers at CD Projekt RED have promised that there will be a traditional New Game+ mode for Cyberpunk 2077, but as it stands right now, we haven’t seen a traditional New Game+ option that lets you start the story over while keeping your gear; all you seem to be able to do right now is start a new character. Quite often a ‘true’ New Game+ only comes after launch, so it’ll probably come in time.

Cyberpunk 2077 Endings: the endgame and point of no return

You’ll know that you’re reaching the end of Cyberpunk 2077 when the mission Nocturne OP55N1 triggers. This will happen after you’ve exhausted all of the other main quest missions – the multiple strands you have earlier in the game will converge with this one mission. The objective is simple: Meet Hanako at Embers. 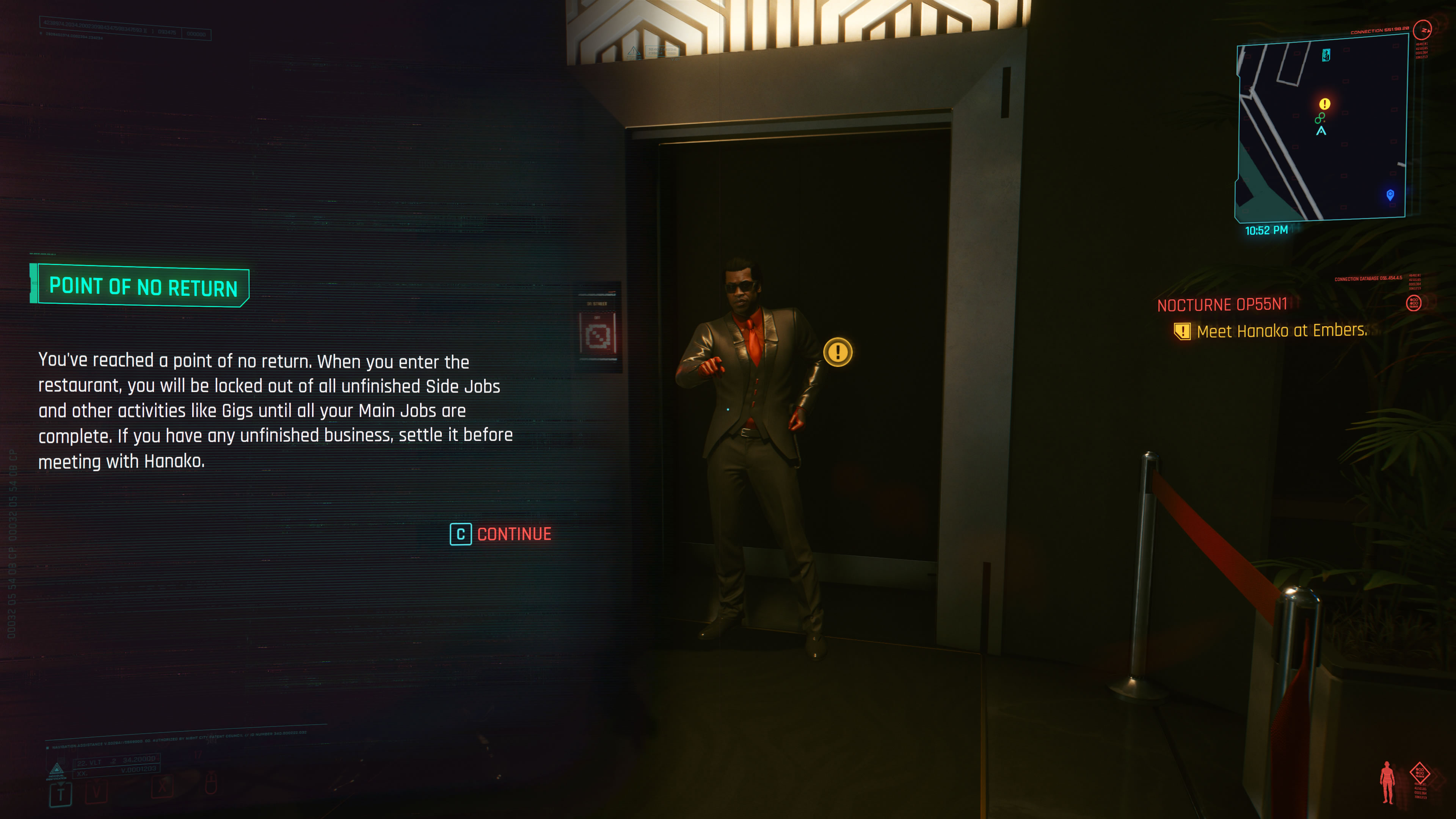 This is the point of no return. The game will automatically save right before you enter Embers (though we’d say creating an additional manual save won’t hurt), and there’s no going back once you enter: from there, though there are choices that’ll send the game branching, it’s a rollercoaster until the credits roll.

Inside Embers, you’ll have a meeting with Nanako Arasaka. She’ll lay out her plan for helping you and unseating her brother. But Johnny won’t like the idea of trusting any corpo.

You’ll leave Embers and have time to consider your position, as V’s condition worsens. In the ensuing scenes, you’ll have some choices to make. While other choices from throughout your play through will have an impact on your endings, the overall ending you get will be determined by your choices on the rooftop after meeting with Hanako in Embers.

Cyberpunk 2077 Endings: how to get every ending

If you choose to side with Hanako Arasaka, you’ll be involved in a covert operation to take down her brother. Johnny will hate that you’re trusting an Arasaka and peace-out on you.

The first thread of this mission involves breaking Hanako out of house arrest, while the second part involves entering Saka tower to try to persuade the board of the truth.

After completing the mission, you’ll find yourself in a unique new location – up in orbit, in an Arasaka Space Hospital. After a repetitive series of mundane tasks, you’ll be faced with a choice: return to Night City with only six months to live, or agree to be put into Arasaka’s ‘Secure Your Soul’ program – otherwise called Soulkiller – killing V’s mortal body but preserving their mind for the hopes of an extended lifespan.

Hitting Saka with Johnny and Rogue

Johnny’s idea is to repeat his old attack from years ago – sort of. This time, instead of nukes, he plans to use Rogue to force himself into Mikoshi, where he can then get V and his mind’s separated. He asks V to hand over his body for this, so he can get Rogue and Alt Cunningham on board.

After the mission is complete, the player faces the choice between letting Johnny or V keep the body. If you choose V, she takes Rogue’s place as the queen of Afterlife and takes on a very high-end merc job in her epilogue. If you choose Johnny, he begins to live a quieter life and after getting to know a young neighbour and paying tribute to friends lost, leaves Night City for good.

With a little help from your Aldecados Friends

This option is only available to you if you’ve completed the Panam series of side quests. Rogue introduces you to Panam for some main quest missions, but you can meet up with her again and help her more, meeting and getting close to a whole different cast of characters.

If you’ve completed this quest and helped Panam’s tribe to get their hands on a tank, you can then call them for help when you’re on the rooftop with Johnny. They’ll devise a plan to use the tank to attain a giant drill – which you can then use to drill beneath Arasaka Tower for access. After this mission is complete, you’ll have a choice.

V can return to their body, but only with six months to live, while Johnny will go beyond the Blackwall to possibly survive in cyberspace. If you do this, it’s arguably the best and most happy normal ending: this is what Johnny wants, and if V has a love interest, they will be reunited with them before leaving Night City for good with their love interest, Panam, and the other Aldecados.

If you choose to have Johnny return to V’s body, V will instead cross the blackwall in his place. Johnny will take up a new life in V’s body, and after a brief epilogue where he lays a memorial for V, he leaves Night City for good.

Putting it all to Rest

On the rooftop with Johnny, you’re faced with two to four clear options, depending on which you’ve unlocked. However, there is an extra one. When given the chance, say, “Could also just put all this to rest.” You can say this after choosing one of the other options when given a choice, for instance, before re-confirming your commitment to a plan.

In this ending, Johnny and V will have one final heart-to-heart on the rooftop, and instead of executing a crazy plan, they will go out together, ending their lives on their own terms. This, obviously, is the shortest ending, cutting out the entire final mission.

In addition to the above, we also know that there is a secret ending hidden away in Cyberpunk 2077 – we’ve been told so by CD Projekt RED themselves. But, as yet, we’re not entirely sure how to unlock it.

Here’s what we do know: it involves your ‘affinity level’ with Johnny, which is a hidden stat that tracks your relationship with him and has an impact on how he interacts with you.

CD Projekt tells us that you’ll want to be nice to Johnny, but not too nice – as he thinks that’s fake. We also know that you’ll need to tackle all of the side jobs that involve letting Johnny put his life in order – so revisit old friends, let him take over your body, play one last gig with the band, and so on. This plot line culminates in a visit to where Johnny’s body was buried, where you seal the deal on your friendship.

We sadly don’t know how to tell if you have truly become friends, you must then go to the rooftop where a choice is made and instead not make a choice, instead glancing back and forth between Johnny and the gun on the table for a while, otherwise not answering. At this point, if your relationship is in the right place, Johnny will suggest one final path: he will attack Arasaka on his own, in a suicide mission, so that nobody else’s life is on the line. This is designed as the ultimate challenge in the game, throwing slews of super-powerful enemies at you. If you survive, you’re again given the choice between V or Johnny keeping the body, with similar results to the other non-Arasaka endings.

We still haven’t triggered this ending… but will update the page when we do. Do let us know in the comments if you manage it.

The Pixel Remasters are nice, but for 16-bit Final Fantasy, GBA is still definitive

FFXIV Guide: How to access the Haunted Manor and complete Phantoms Feast

The Pixel Remasters are nice, but for 16-bit Final Fantasy, GBA is still definitive

FFXIV Guide: How to access the Haunted Manor and complete Phantoms Feast