Cyberpunk 2077 I Walk the Line | Should you choose Netwatch or Placide?

You investigations have V as far as Pacifica’s mysterious gang of elite netrunners: the Voodoo Boys. Now you’ve gotten their attention, they have a job for you in Cyberpunk 2077’s I Walk the Line quest.

After your first meeting with the Voodoo Boy’s burly lieutenant, Placide, make your way out of Batty’s Hotel – enjoying the reference to Rutger Hauer’s character in Blade Runner, Roy Batty, as you do.

Your mission is to take out the Netwatch agent stationed in the Grand Imperial Mall and teach them not to tread on the Voodoo’s turf so brazenly again.

Cyberpunk 2077 I Walk the Line quest

From the Voodoo Boys lookout across the road, take stock of the Grand Imperial Mall and plan your way inside. Netwatch has enlisted the help of the Animals – a gang of ‘roided bodybuilders – to take hold of the GIM (more like gym, eh?). 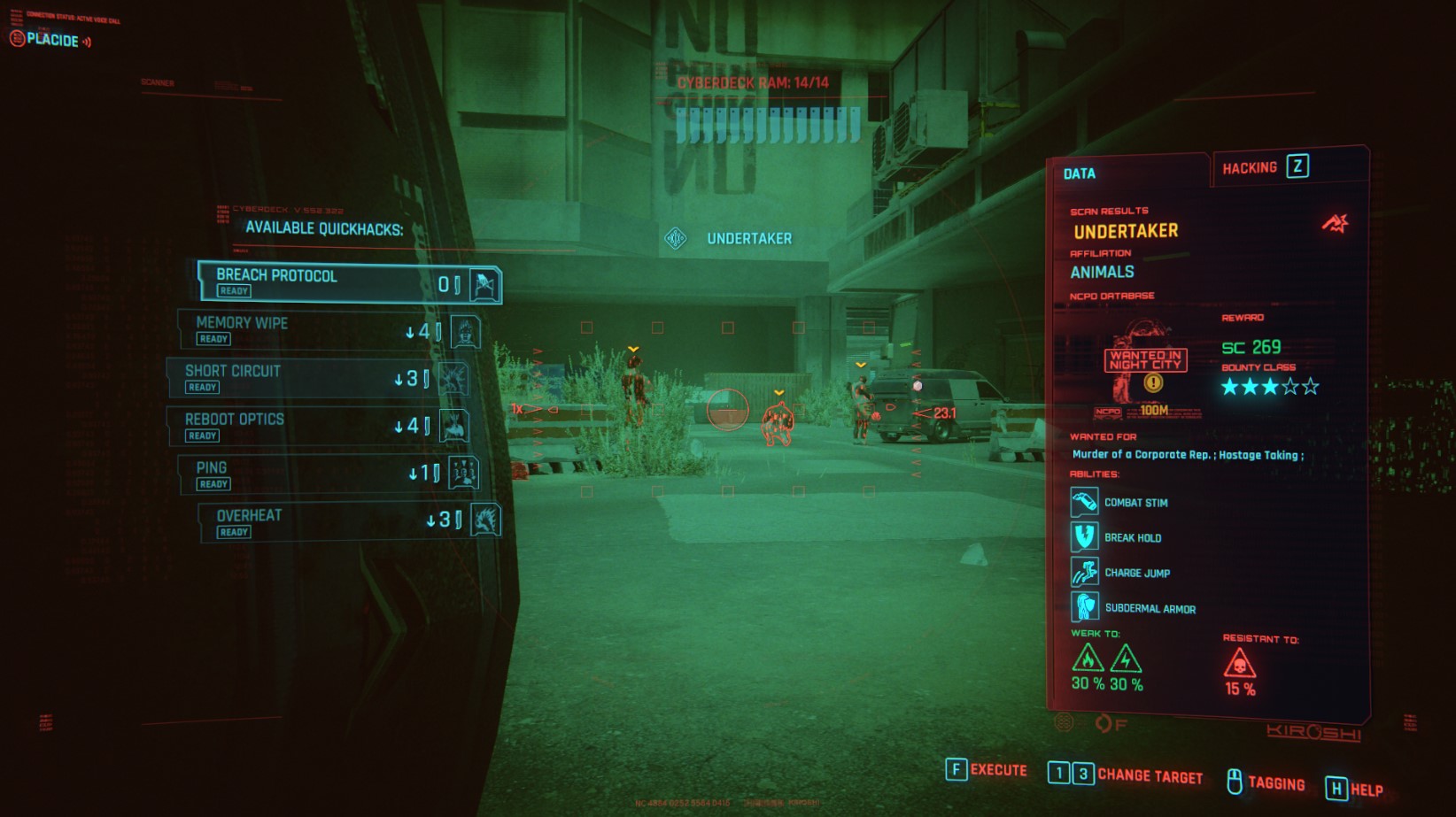 Further around the corner there are two more Animals, followed by three on the far side of the back entrance, but those three are easier to slip past as you head through the loading doors.

Inside the GIM, climb up to the level above and look to the gate on your right. Be careful not to alert the security guard and camera in the corridor to the left of the gate. 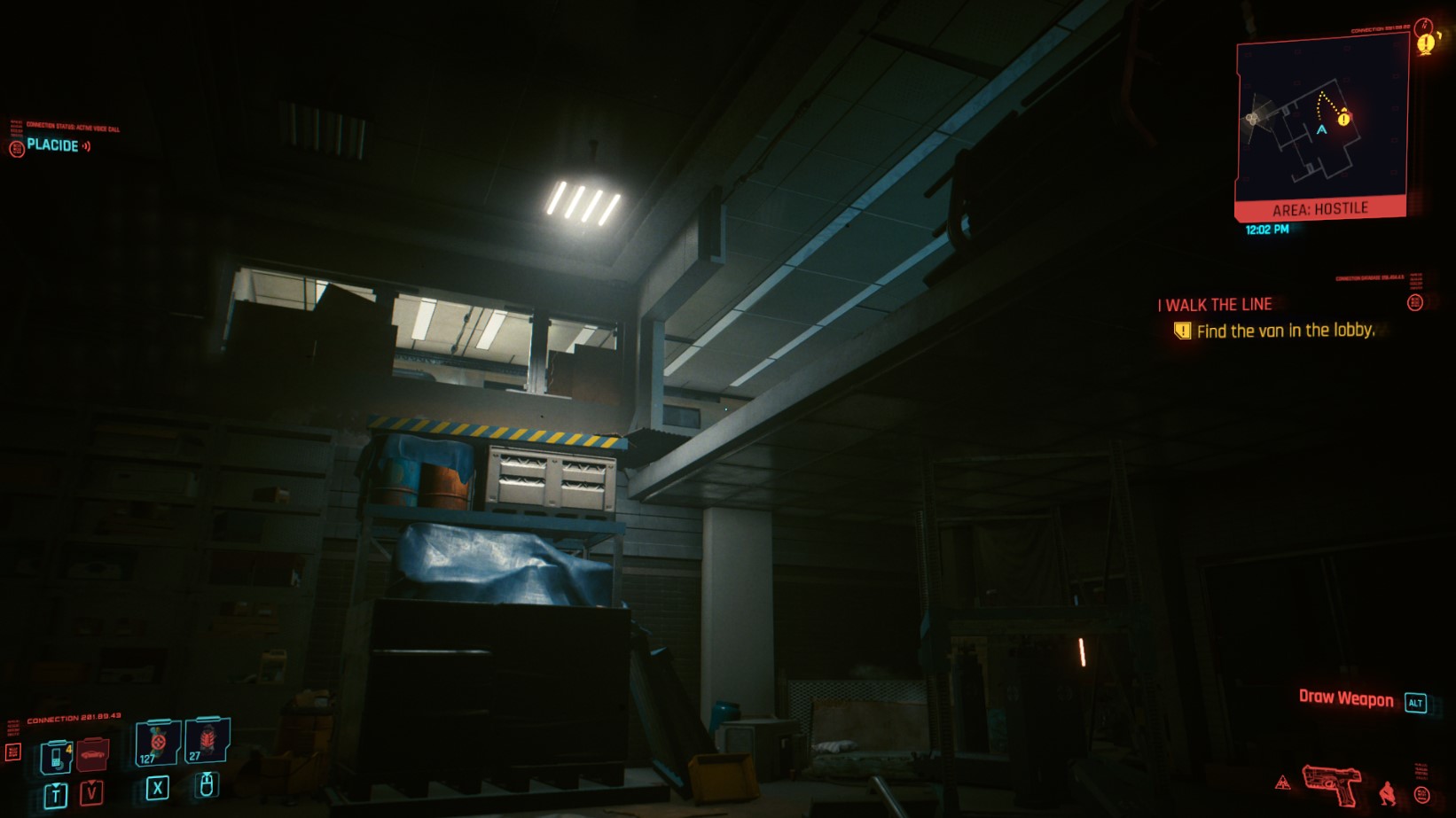 Now you have a big choice: go in loud, or commit to stealthing all the way through. It really doesn’t matter if you rock up all-guns-blazing, other than feeling sneaky and cool. 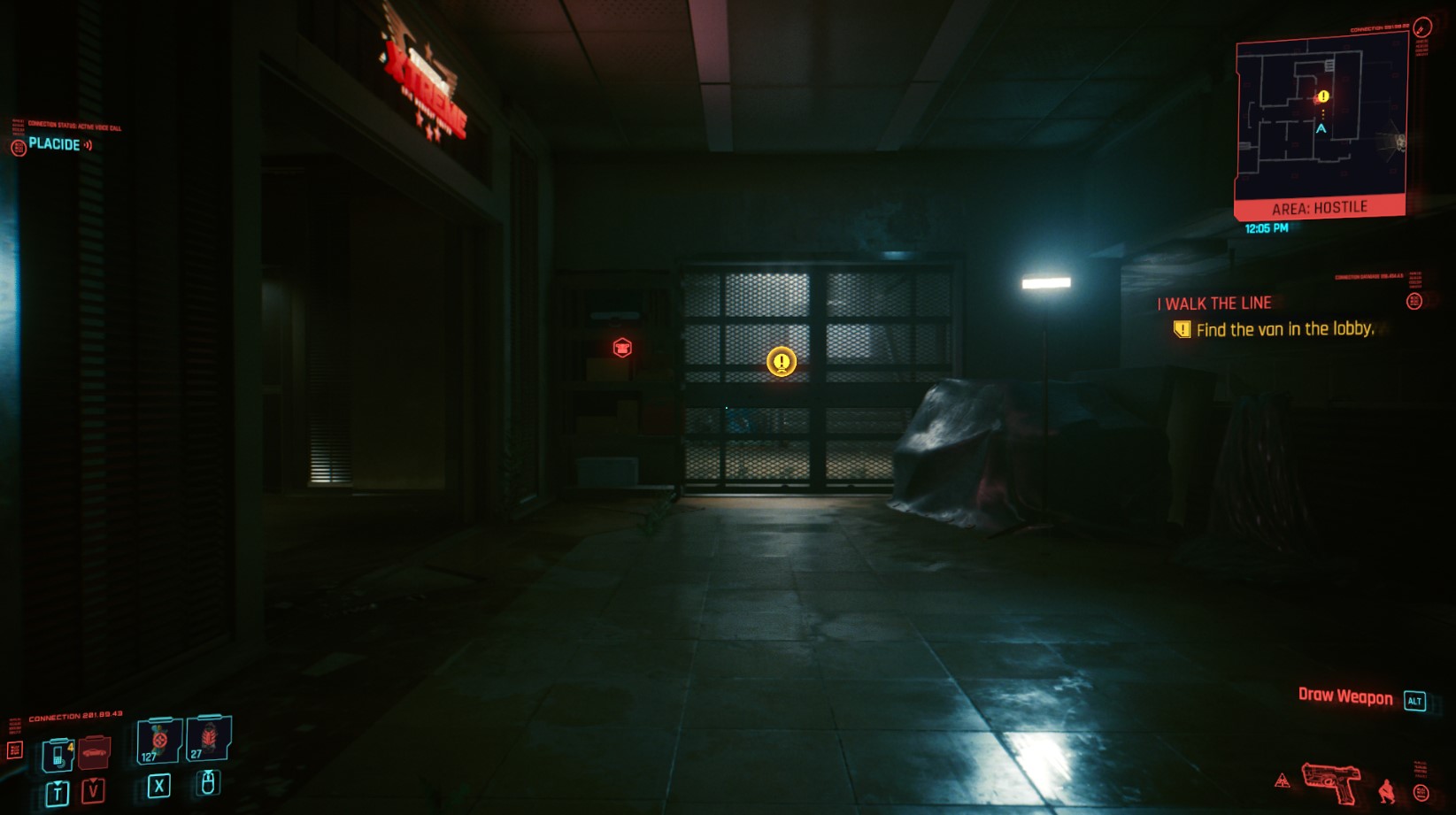 It’s tough, but much easier with 10 Technical Ability. If you choose to shoot your way through, Placide will be upset, but you can skip through to the later boss fight.

To take the stealth road, with Technical Ability 10 you can get through the gate in front of you, otherwise you have to sneak around through the corridor with the guards. There’s a shedload of eddies in the room just to your left when you crack the door if you can, but either way the path leads up some stairs to the next level of the GIM, to the escalators.

Look left and ping a nearby guard to get the lay of the land. 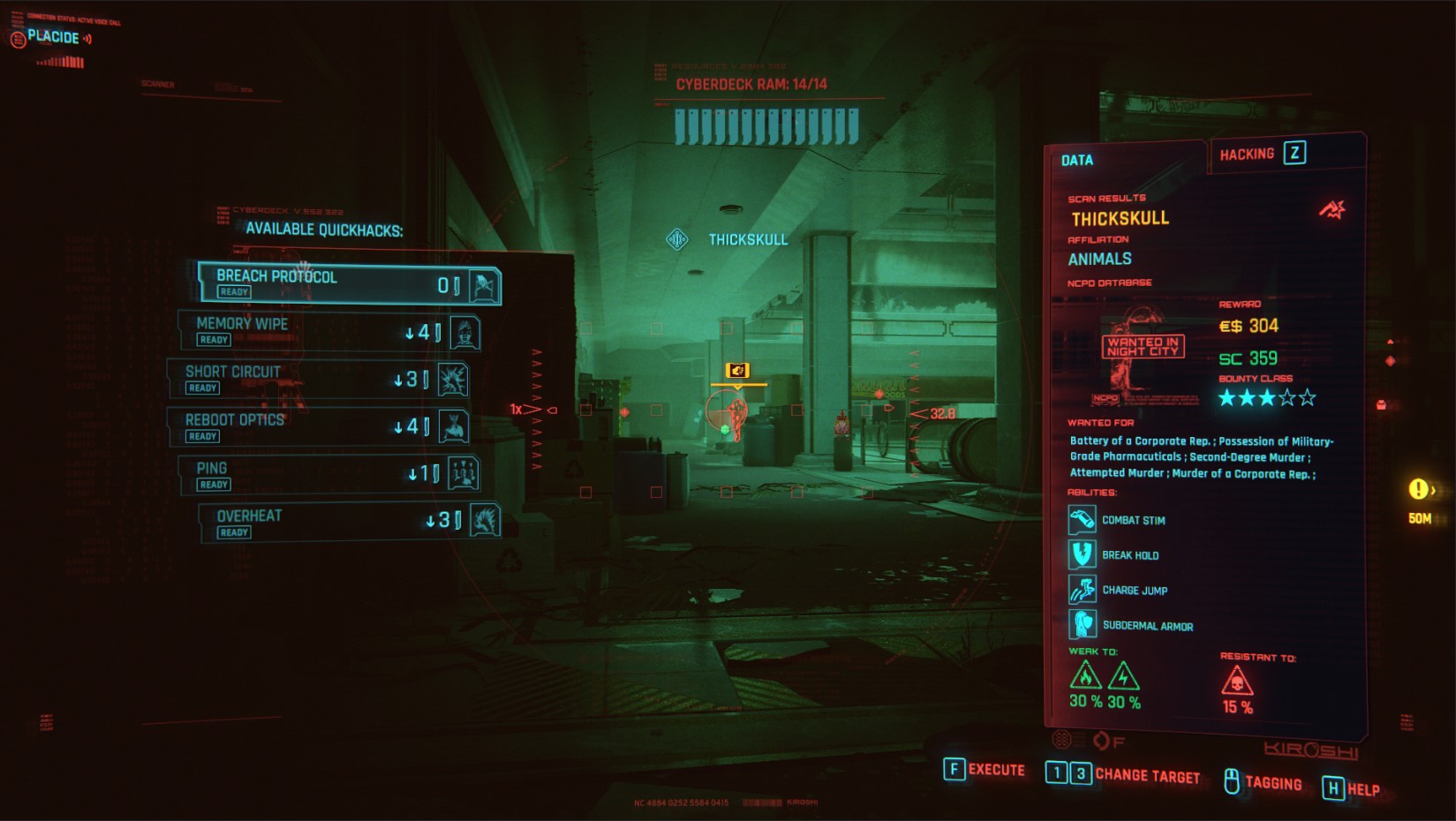 There are two more guards in this area you need to sneak past. It’s easier to try and sneak straight down the escalators than take them out because their buddies have a knack for magically seeing the bodies and rumbling you.

Crouch walk to the escalators and towards the quest marker straight forward, where you’ll be walking right behind backs of Animals, but out of sight. 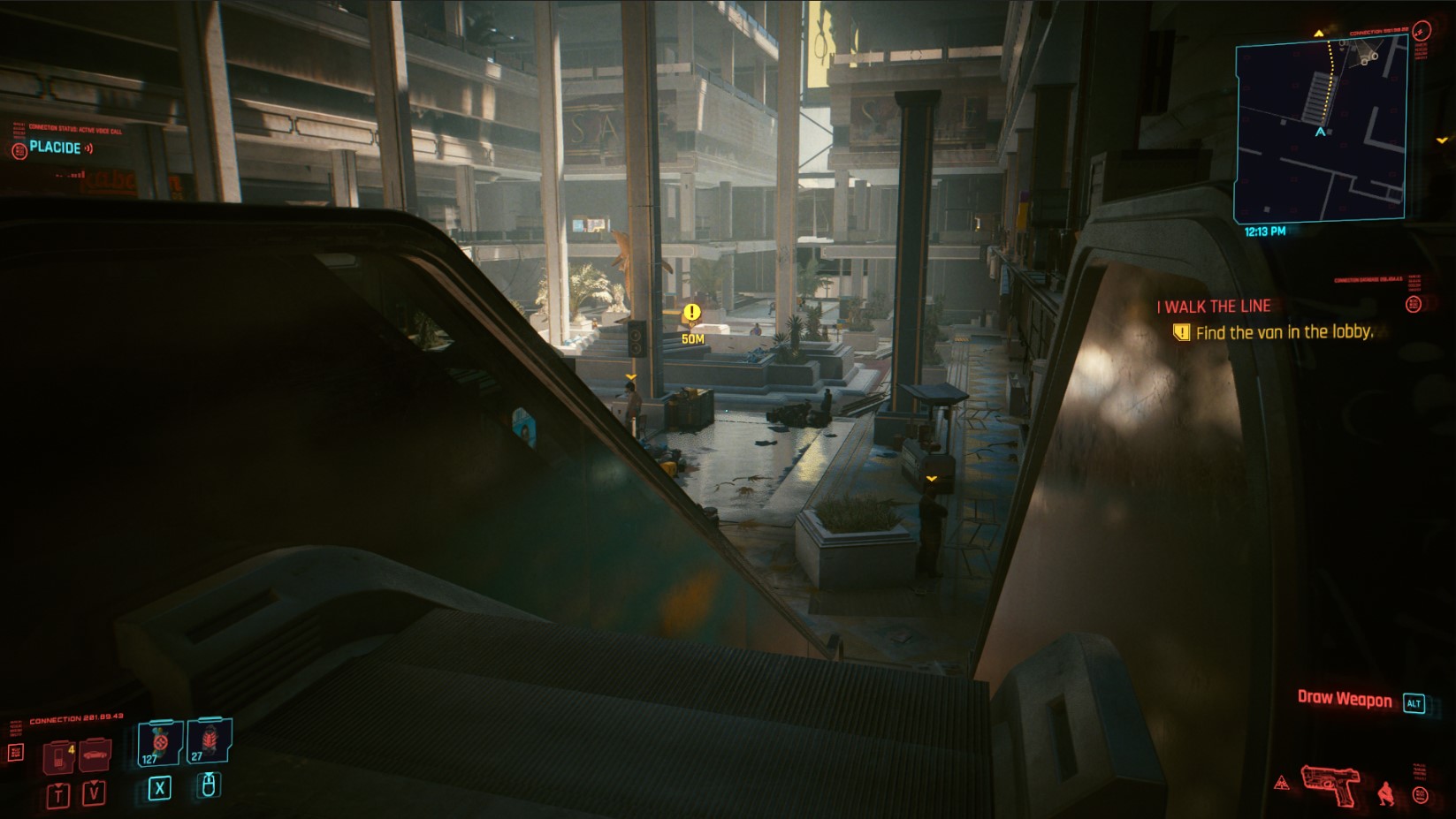 At the bottom of the escalator look to the left and go through the food kiosk. Make your way forward being careful to stick behind cover. 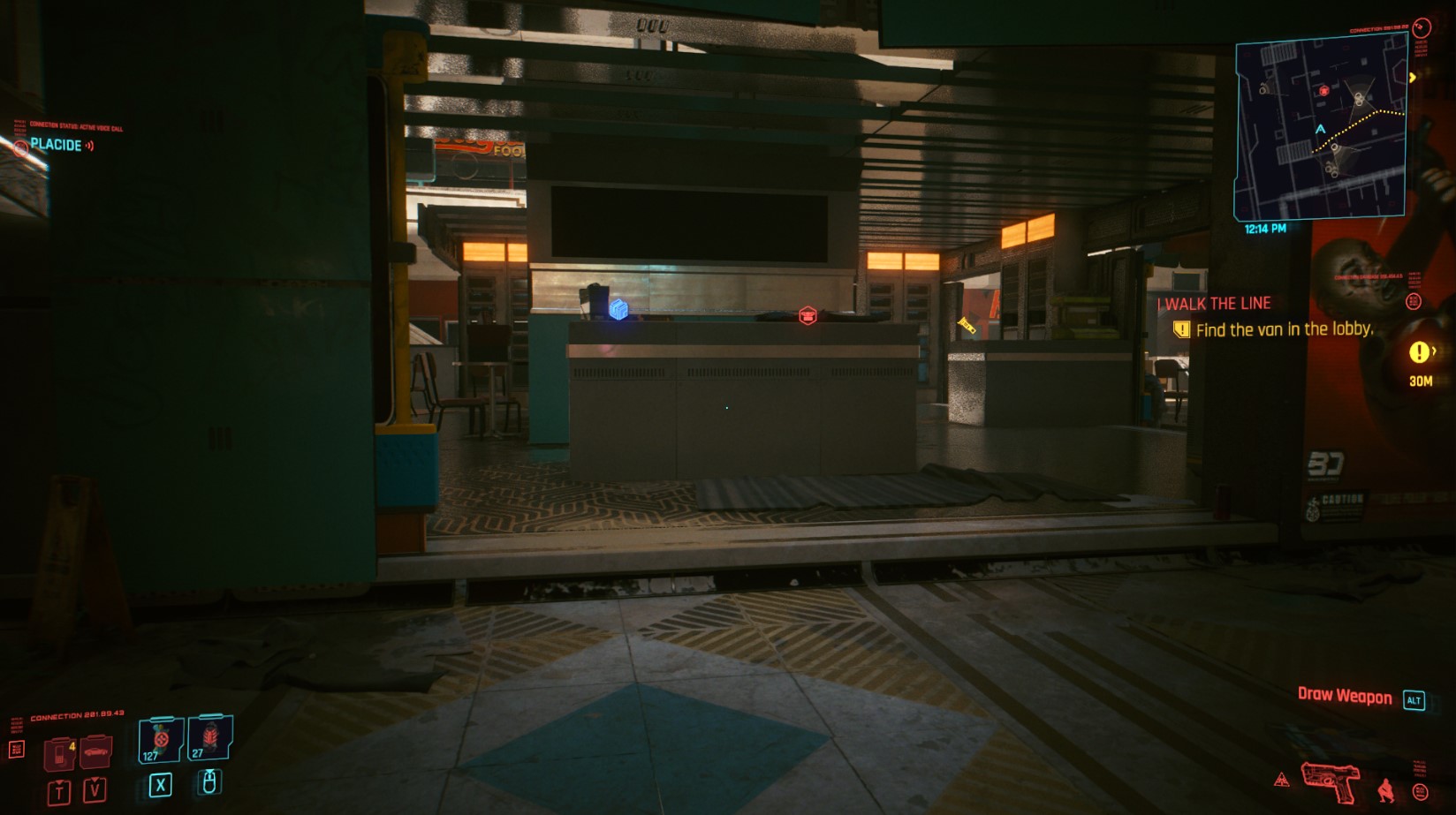 Your marker will change once you get close to the van.

To get to it, you need to deactivate the turret on your right with your scanner and sneak around the three guards stood next to the van. 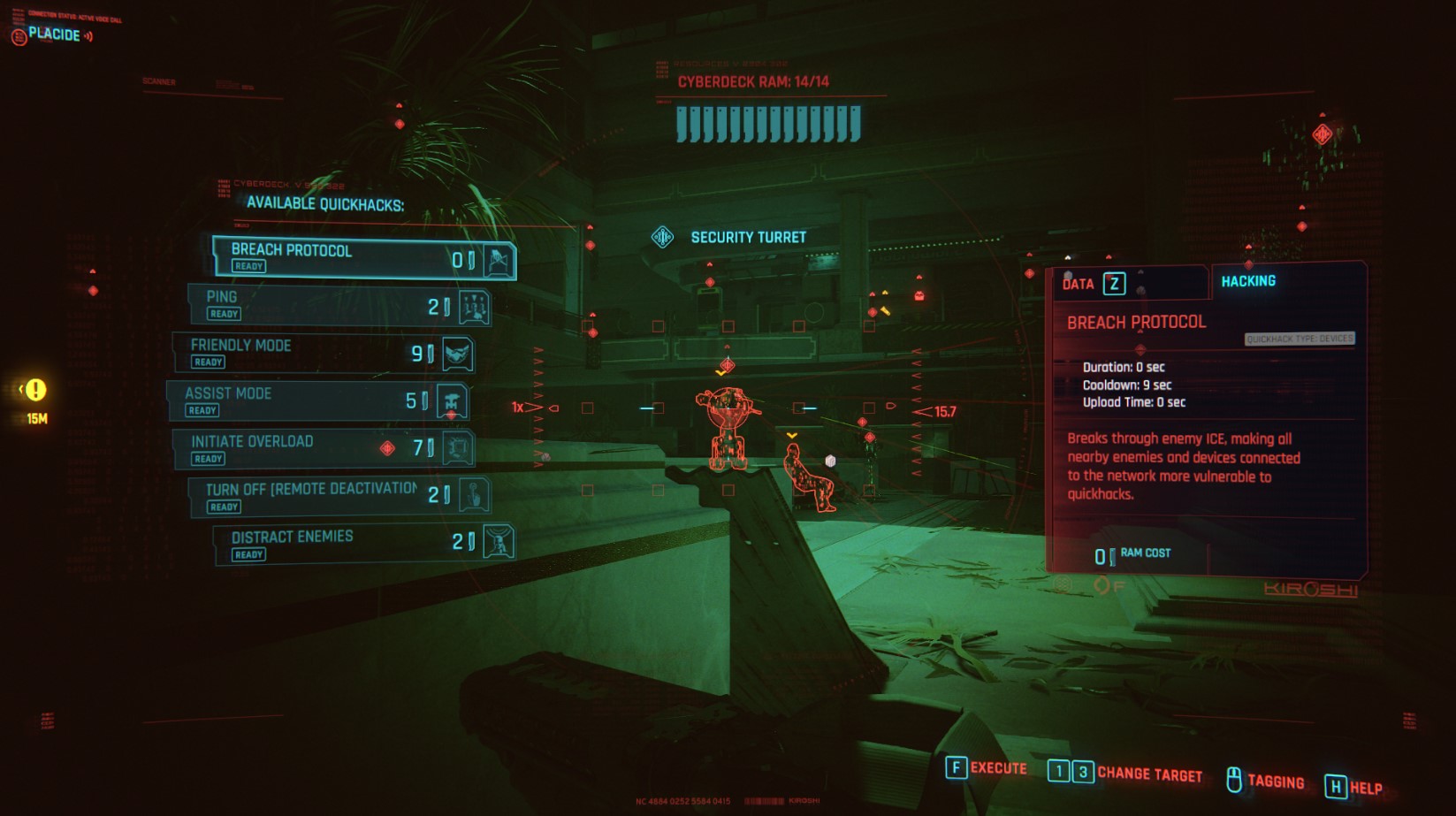 It’s not as difficult as you’d expect to get around to the other side of the van undetected. Walk further towards the far wall of the mall and give the van a wide berth, circling around to the blind side of it. There you can interface with it as Placide says. 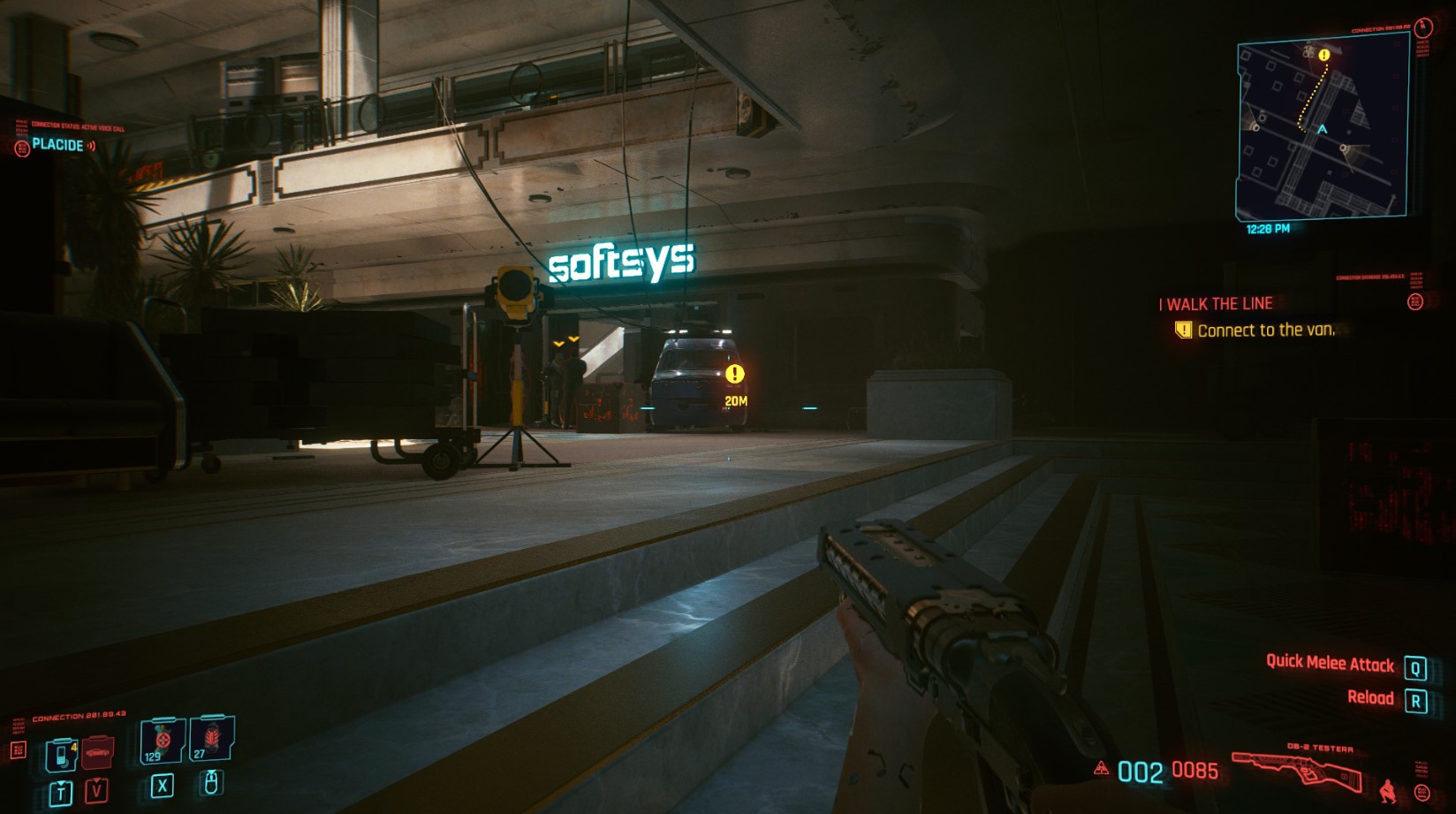 At this point you’ll get a whiff of the divergent path in this quest as the Netwatch agent tries to talk to you.

After, he’ll shut the way forward and you’ll have to climb up the scaffolding over to the right. 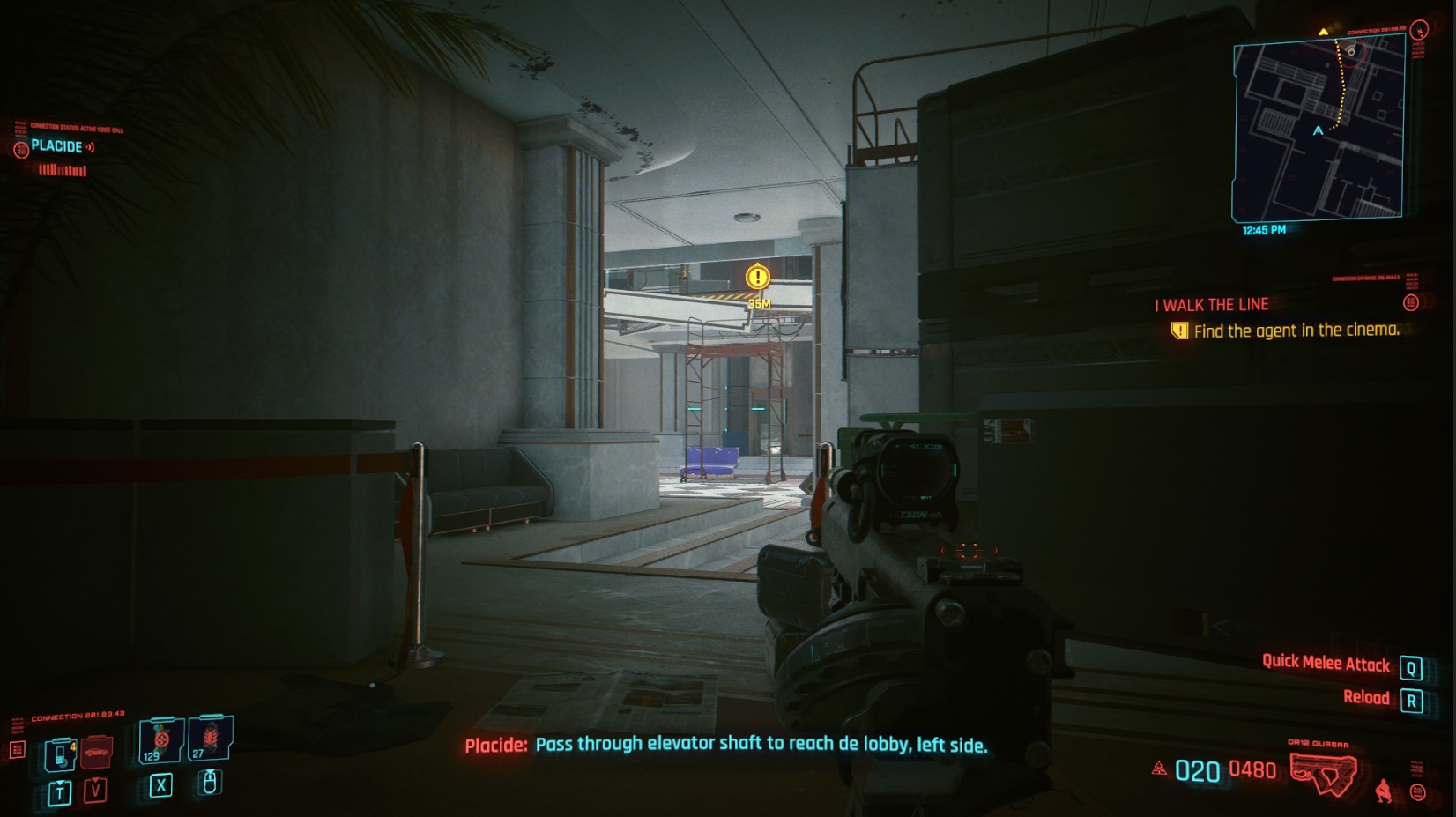 Be careful as the Animals will be swarming this area. To get through undetected, you’ll probably have to quickhack Short Circuit a few Animals in your path, but when the way’s clear you just have to make a break for it straight forward from the top of the scaffolding. 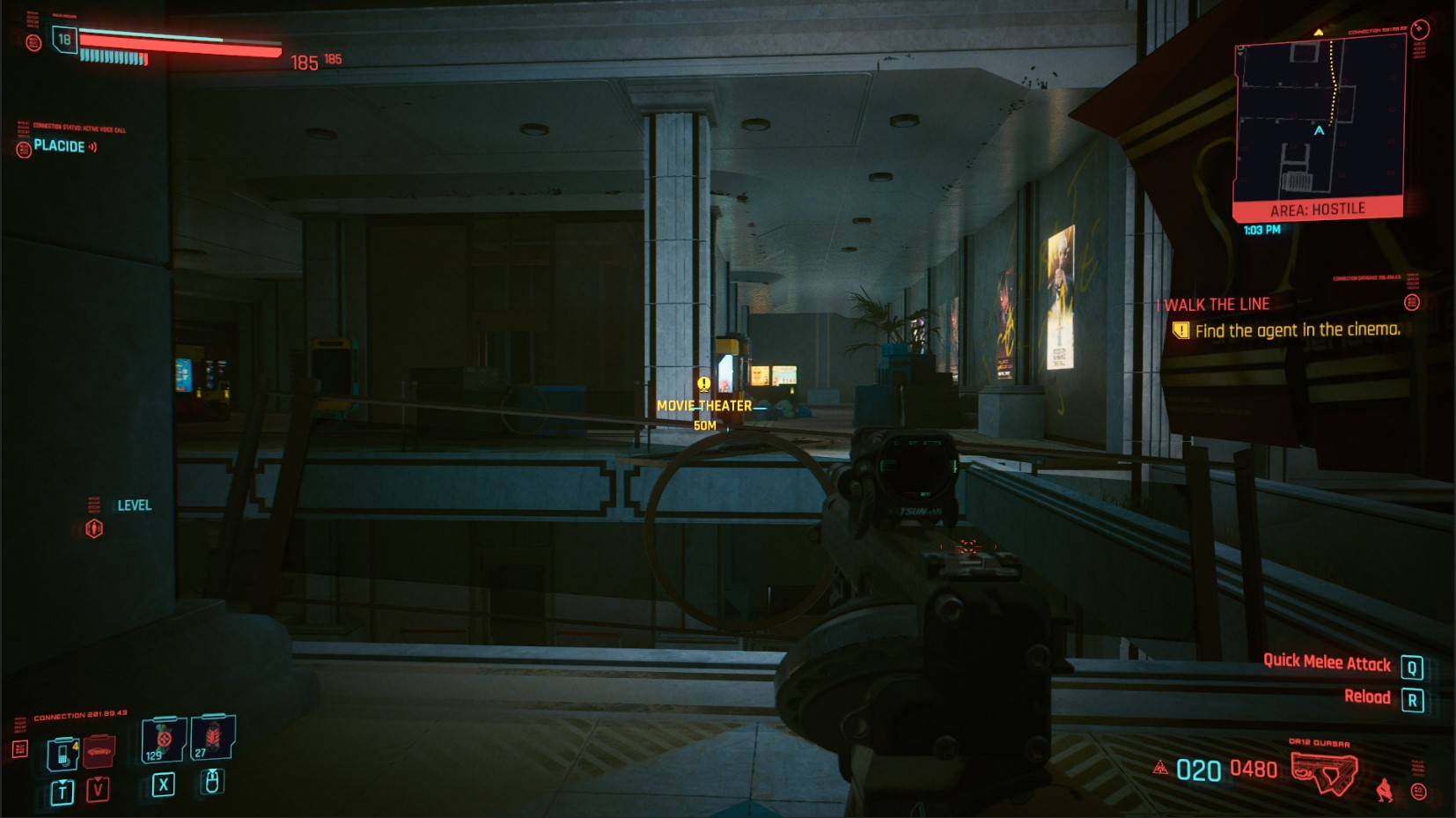 Either wait for an opening or stealthily quickhack the Animals down, then make your way across to the movie theatre. Through these doors you’ll see the boss of the area, Matilda AKA Sasquatch. 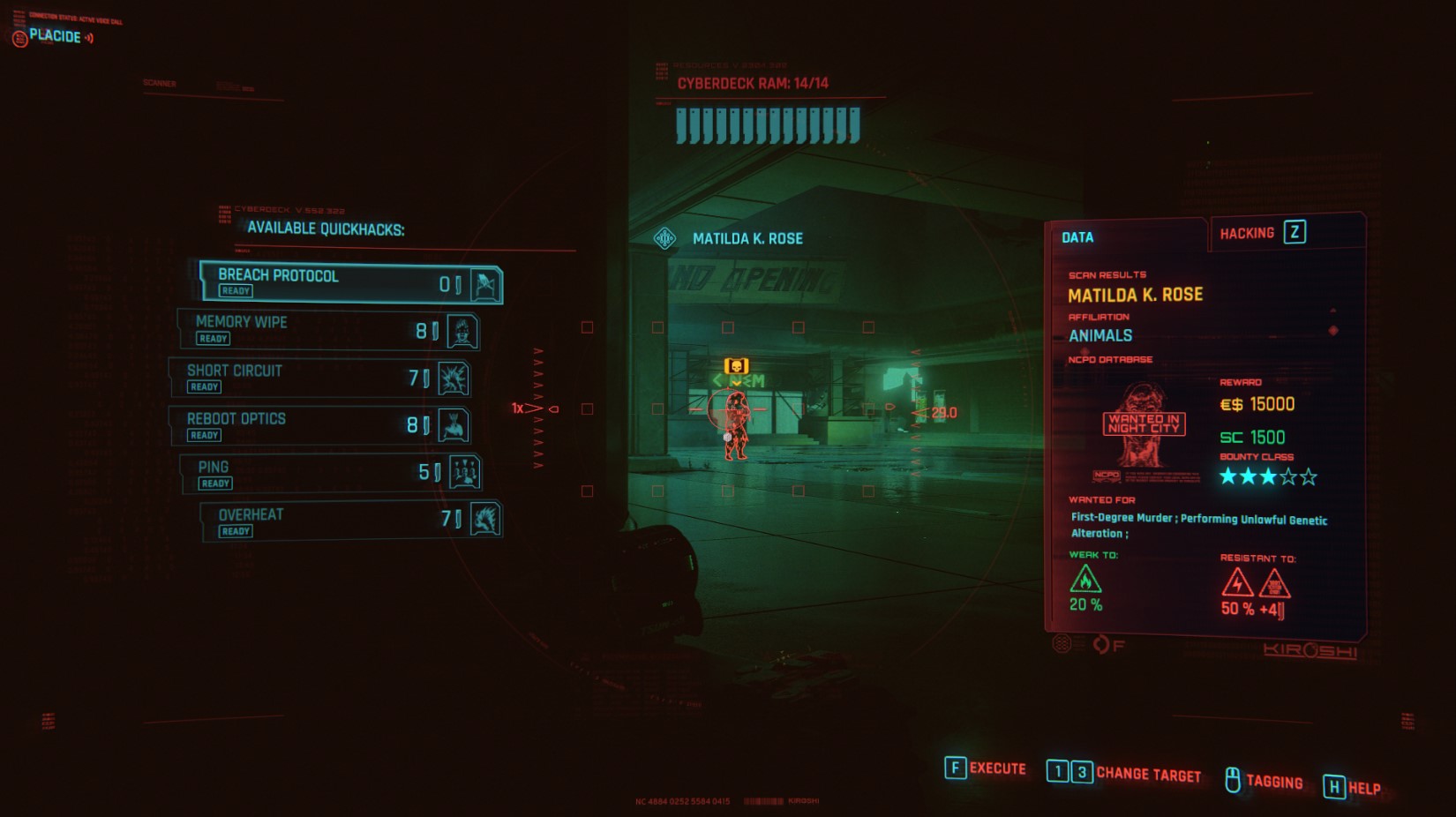 Hide around the corner, scan her and toss in a cheeky quickhack for an advantage. She’s quite simple to take out if you keep your distance from around that corner, and don’t let her get close.

Approach where it says cinema on the far side of the room and Placide will open the shutters. 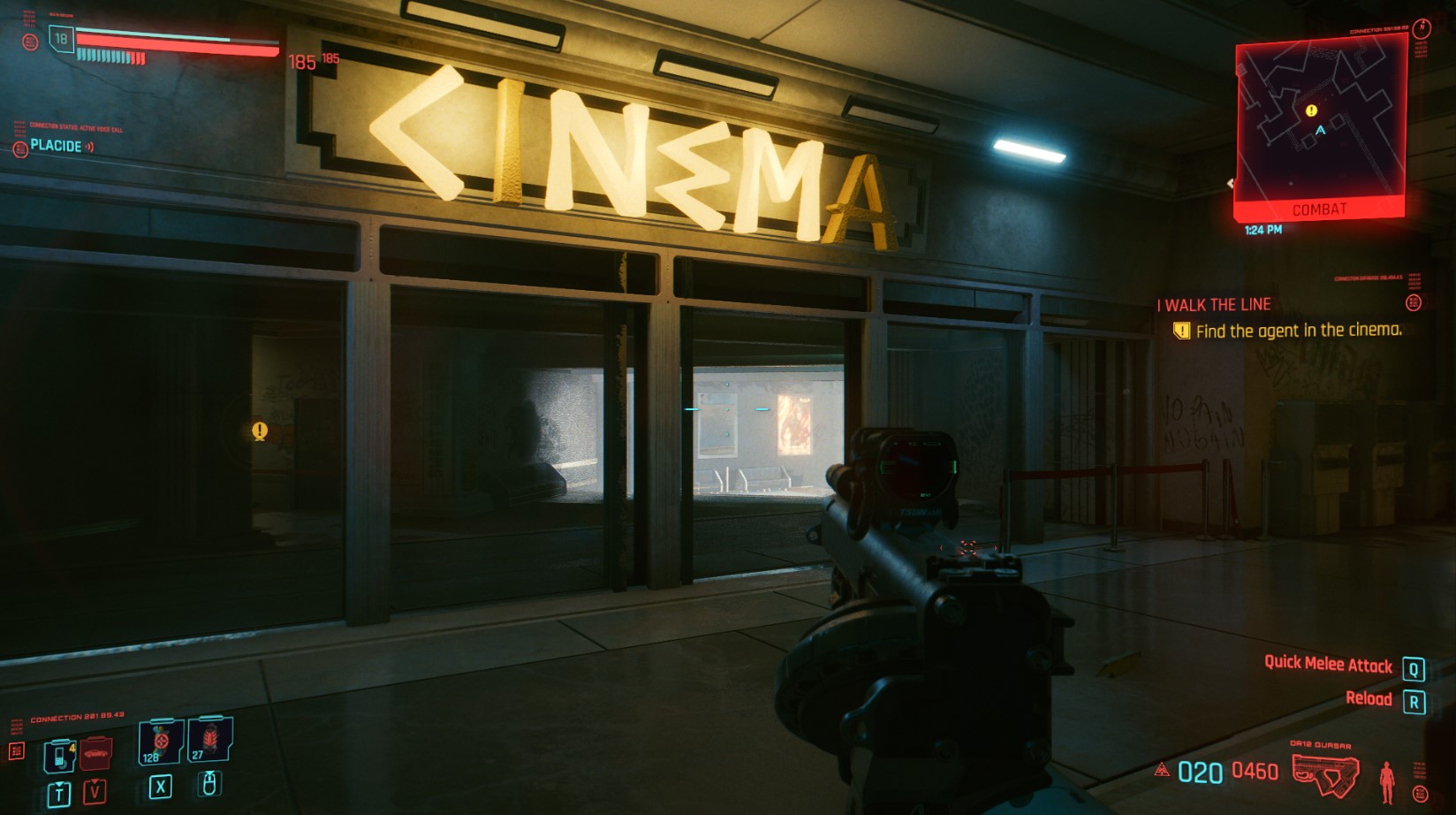 Should you side with Netwatch or Placide?

Head to the projection booth and holster your weapon. If you have your gun out he’ll attack so if you want to hear him out, keep it in your pants.

As he surrenders the Netwatch agent tells you that the corp have frozen the Voodoo Boys leader, Brigitte, in cyberspace and that you’ve been sent there to break them out.

He tells you to run a system diagnostic to see that the Voodoo Boys have spiked you with a virus and are setting you up. 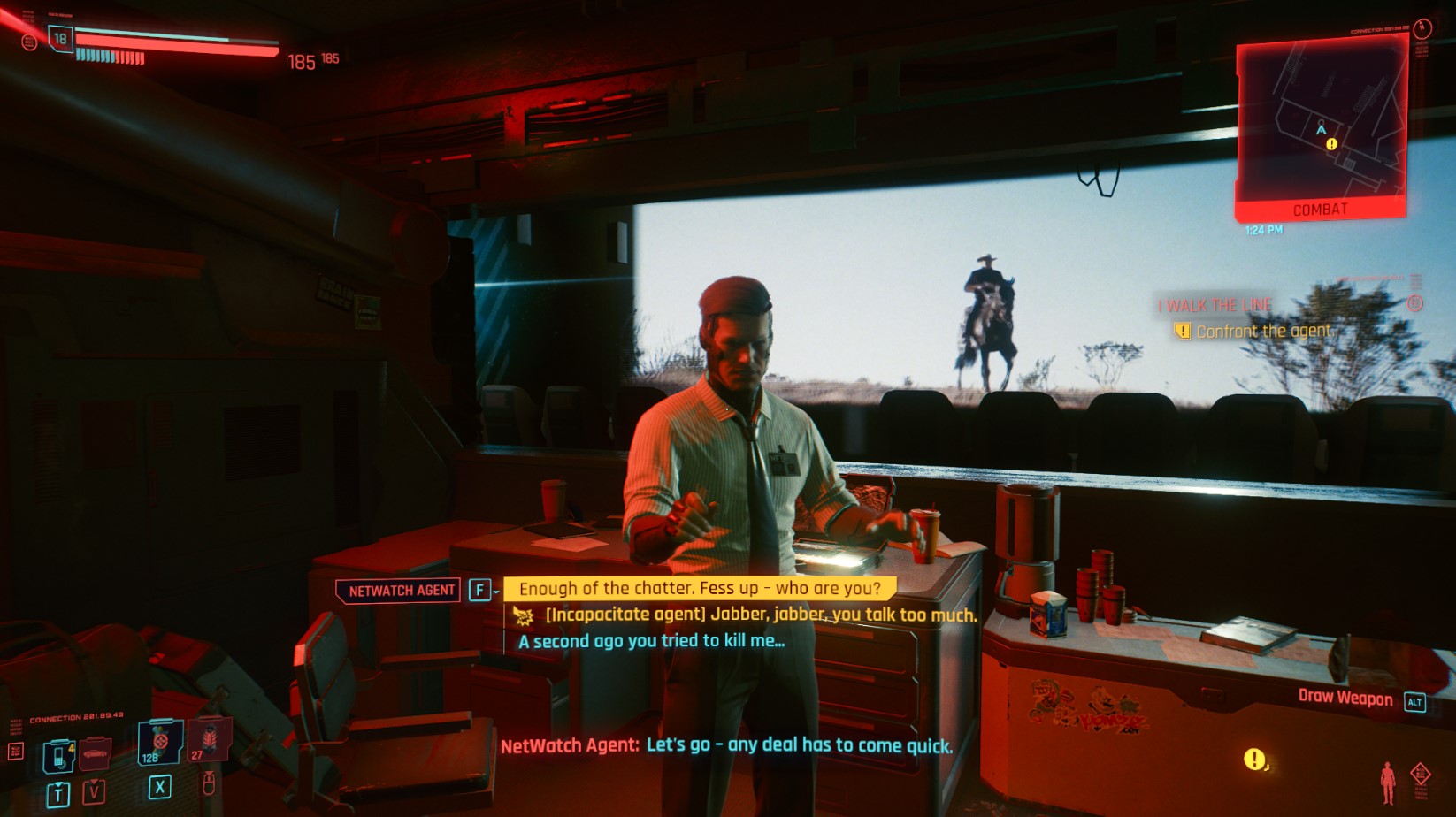 If you keep listening, he’ll say that he’ll release Brigitte if you let him go with the data.

So, this gives you a tough choice to make: Should you throw in with Netwatch, or stick with the Voodoo Boys?

Without going into spoilers, what the Netwatch agent says is technically true, but doesn’t negatively affect you in the story. As Johnny says, Corpos aren’t the most scrupulous characters, and you should maybe not take what they promise at face value.

Whichever you choose, the story still gets to the same point in basically the same way. But, in my opinion, you get screwed over less if you stick to your original deal with Placide.

After the cutscene, make your way outside and hitch a ride back to Batty’s to speak to Placide.

He’s either pretty surprised or very angry to see you, but Brigitte will intervene soon after. Speak to her and you can learn more about the Relic biochip.

Ask her for help and she agrees.

Follow Brigitte into the crypt and advance through the conversation. When you reach the ice bath, hop in and prepare for a trip. 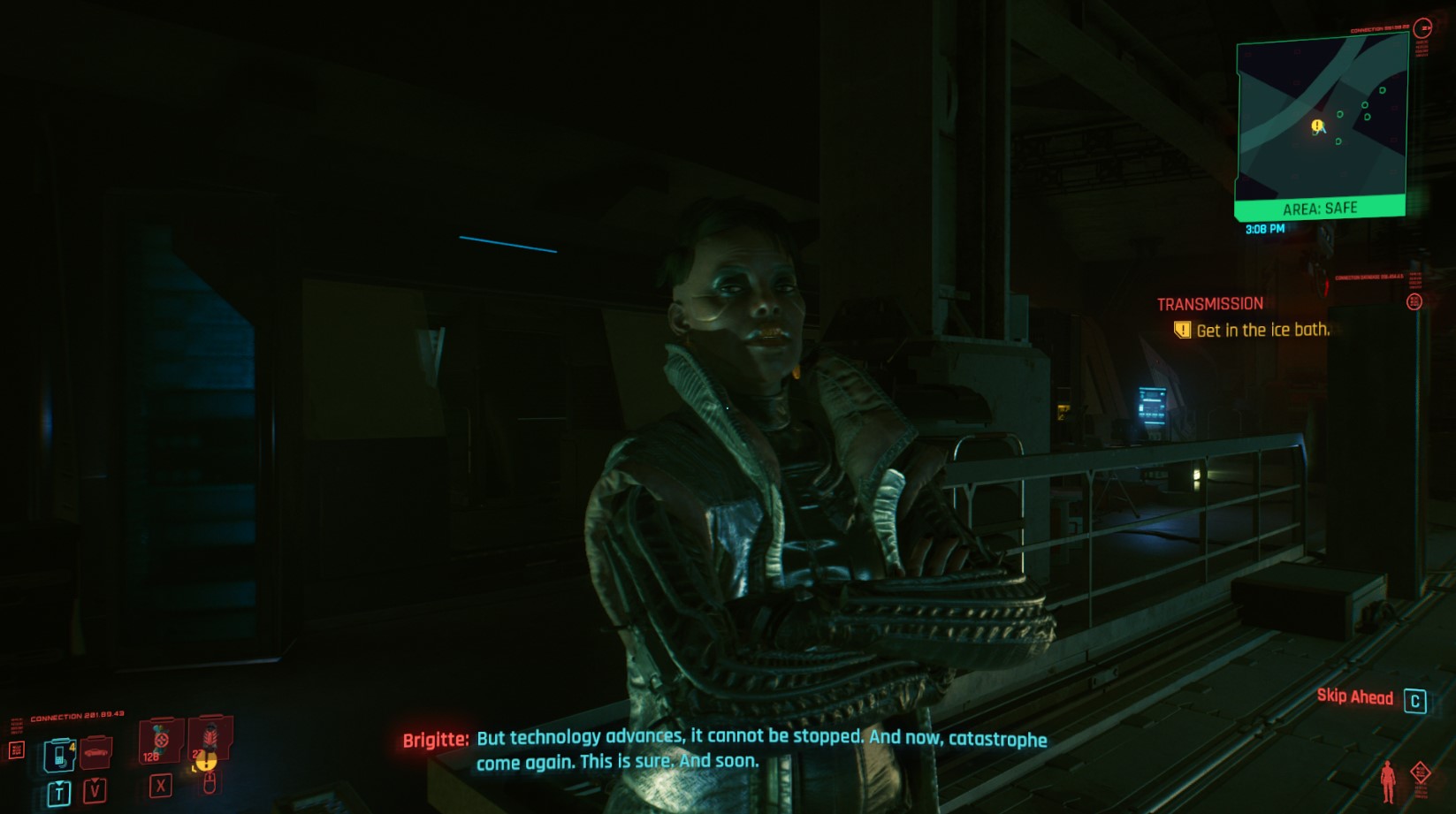 This is section is quite straightforward and would be spoiler-heavy if I spelt it out. Follow the quest markers and speak to the characters involved until the dialogues are exhausted.

There aren’t any lasting choices to make inside the net, so you can proceed as you wish.

As it comes to a close, you’ll see the consequences of whether you sided with Netwatch or the Voodoo Boys and get a new lead for your investigation into the Relic.

When you wake, you’ll either talk again to Brigitte or have to answer to Placide. 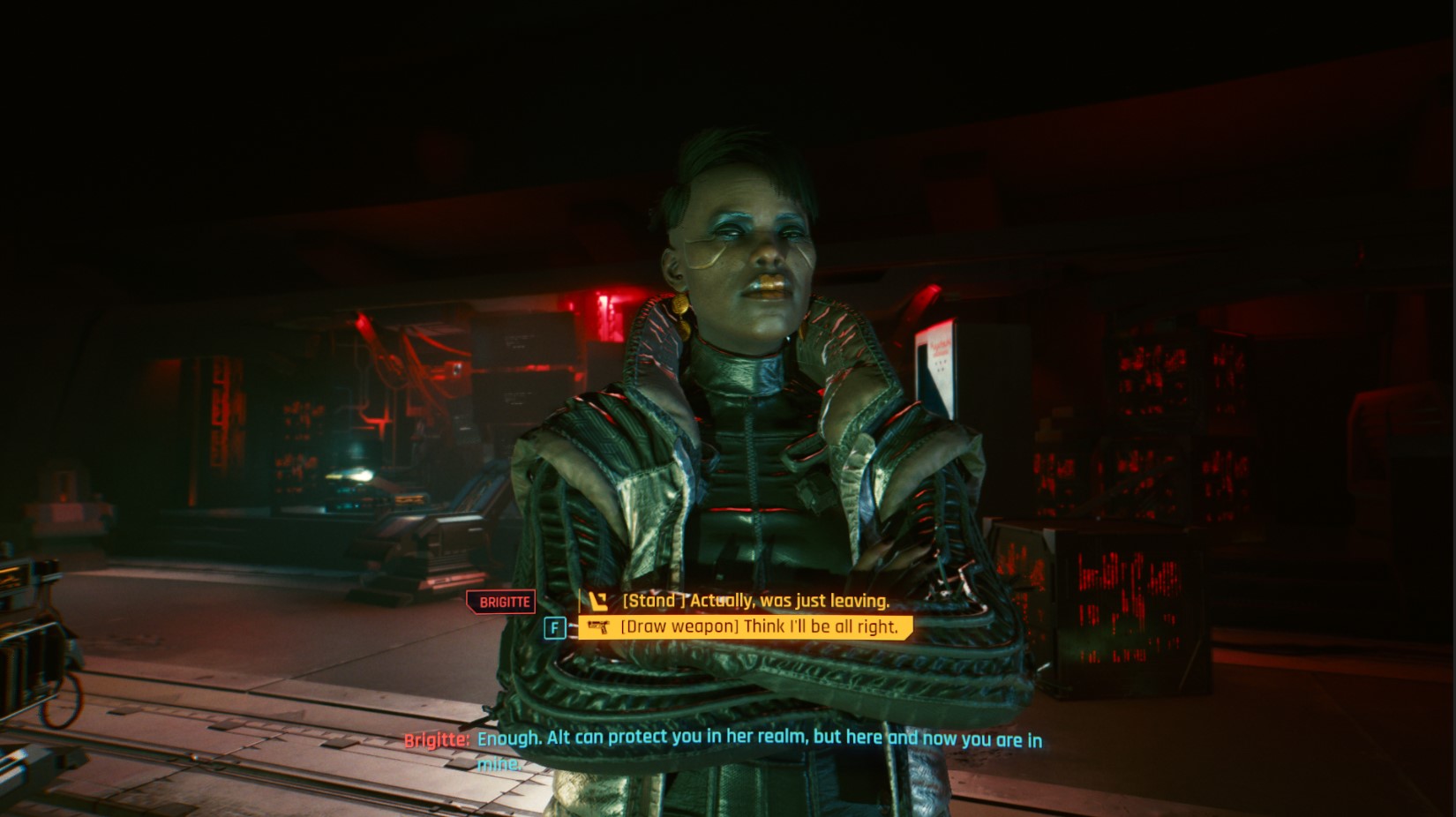 If you stuck with the Voodoo Boys, it’s here you can take your revenge for giving you a virus in the first place, and fight your way out if you wish.

Either way, return to the seaside streets of Pacifica and the quest will end.

While for side-quest aficionados, here’s where to find every Delamain cab in Epistrophy.