Cyberpunk 2077 Legendary Quickhacks: how to get the best, ultimate quickhacks

While it might have first-person shooter blasting and GTA-style driving, Cyberpunk 2077 stays true to its RPG roots with a whole lot of gear, loot, and stats to worry about – and one key category of items you might want to grab as soon as you can are Legendary Quickhacks and the elusive Ultimate Quickhacks – but getting them isn’t easy.

Quickhacks sit alongside the Cyberware, unique & iconic weapons, and to a lesser extent cars, bikes, and Johnny’s Gear as things you’ll probably want to grab as you work towards your ultimate build of protagonist V. Quickhacks have different utilities, of course – some will enrich stealth and non-lethal play, while others will give you deadly abilities to rip entire armies apart.

How to get Legendary Quickhacks in Cyberpunk 2077

As with all other types of item, quickhacks in Cyberpunk 2077 fall into a few categorized rarities: Uncommon (green), Rare (blue), Epic (purple), and Legendary (orange). There’s no common quickhacks in the game – they’re all uncommon or above, and that’s represented in how often they spawn, too. You’ll be able to find Uncommon and Rare quickhacks fairly freely, however – but things get more difficult with the Epic and Legendary classes.

Here’s the bad news: unlike with the best Cyberware in the game, Legendary Quickhacks aren’t generally available for purchase in Cyberpunk 2077. Instead, your best bet for getting your hands on Legendary Quickhacks is to craft them or force them to drop. There’s a few ways to make these things happen – or, indeed, make them more likely:

The easiest, earliest way to unlock some ultimate quickhacks is to pick up the Datamine Virtuoso perk. This is found on the middle right-hand side of the Breach Protocol tab of the Intelligence perks list. There are two levels to it, meaning it’ll cost two points to max out once you reach it. Grabbing this perk makes it so that you can guarantee a quickhack of some sort will drop every time you perform a hack at an Access Point – that’s the mini-game where you’re matching up numbers to data streams when breaking into certain terminals around the world of Night City.

You’ll need to upload all three Daemons to a terminal, at which point you’ll get the maximum amount of rewards – which with the Datamine Virtuoso perk will usually include a quickhack. However, there’s no guarantee this quickhack will be epic or legendary – but the good thing is that the drops are random, albeit slightly effected by the terminal itself.

To maximize your chances, find an access point that requires at least an Intelligence Stat of 10 to hack, and then save scum it. Save, attempt the daemon upload, and if successful see your drops. If a quickhack drops, great – you can continue to save and reload until one in the rarity you want drops. If after a couple of attempts a quickhack hasn’t dropped from a terminal, move on – not all terminals have quickhacks in their loot tables, even with the perk.

Completing these mini-games and uploading all Daemons can be challenging, but don’t forget that you can also grab the Head Start perk from the same page to make matters much easier.

Unfortunately, the only other way to reliably get ultimate quickhacks is to create them yourself – but this requires a huge investment into the Intelligence stat in a character build sense. On the bottom-right of the Quickhacking perks within the Intelligence stat you’ll find the Bartmoss’ Legacy perk, a single-point purchase once you reach it.

This perk unlocks the ability to craft Legendary Quickhacks and also unlocks all of the crafting specs and recipes instantly once it’s unlocked. At that point, all you have to do is hop over to the crafting menu and craft the items you require from our legendary quickhacks list below. However, remember you’ll need to also be concerned about crafting components – so you might want to disassemble legendary or even iconic weapons and buy certain other perks to maximize the legendary materials you have access to. 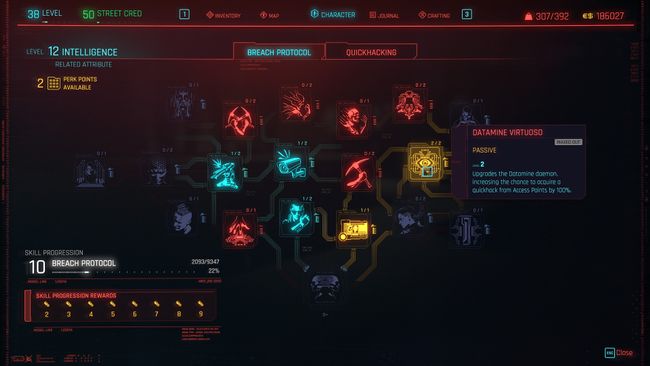 Poisons the target dealing damage and preventing them from attacking effectively. Can spread from one enemy to another. The legendary version carries a passive, always-on buff when equipped that allows viral quickhacks to spread more easily between enemies, and spread further to more enemies. Costs 9 RAM.

Prevents enemies from moving or attacking, and can spread to other nearby enemies. The legendary variant also comes with a passive effect that prevents enemies under the effect of any other quickhack from sprinting. Costs 7 RAM.

As well as applying burn to the target that deals nasty damage over time, the legendary overheat quickhack blocks targets afflicted with the burn from using any cyberware skills. Costs 6 RAM.

By default reveals enemies nearby, but the legendary version allows you to scan and quickhack enemies through solid obstacles – such as through walls. This can turn you into a complete quickhack god, able to take down entire compounds of enemies without anyone having any idea of where you are. Costs 1 RAM.

Deals electrical element damage to the enemy, applying an EMP effect. The legendary variant features a passive, always-on buff when equipped; it means that any critical hits that V lands also add the standard issue Short Circuit quickhack effect, regardless of which weapon that may be. Costs 6 RAM.

Reboot Optics, but for the ears – makes an enemy temporarily deaf, making them less likely to hear you from stealth and also unable to communicate with allies. The legendary version comes with a​​​ passive, always-on buff that means any enemy impacted by the effect of another quickhack is completely cut off from the local network, isolating them and leaving them more vulnerable. Costs 6 RAM.

Deals damage relative to how much the enemy has already been hurt. Killing an enemy with this power can cause panic anyway, but the legendary version comes with a passive buff that means an enemy being defeated by any type of quickhack causes enemies to panic. Costs 8 RAM.

Causes weapons to malfunction and even explode, and can spread to other enemies. Also passively unlocks the Weapons Jammer daemon inside the Breach Protocol mini game. Costs 7 RAM. 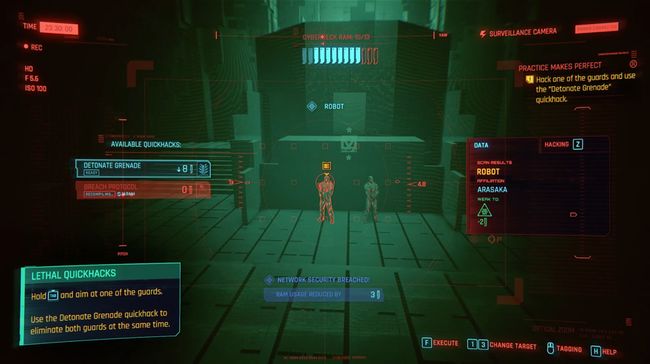 Within the world of Cyberpunk 2077, Ultimate quickhacks are what the name suggests – the absolute best, most powerful hacks you can do. These only come in two flavors – Epic and Legendary. They’re very expensive to use, but the legendary versions of each have passive abilities in addition that help to reduce the cost and therefore use ultimate quickhacks more frequently.

Arguably the ultimate quickhack among ultimate quickhacks, Cyberpsychosis causes an enemy to attack both their friends and foes alike, wildly. If the target is alone, with no allies, they will kill themselves. In legendary form, you get a passive bonus where enemies effected by any quickhack will no longer seek cover from friendly fire. Costs 15 RAM.

This quickhack actually shows up as part of the combat tutorial in the earliest parts of the game, but then you won’t be able to unlock it for real until much later. As the name suggests, using this ultimate quickhack will force the target to pull the pin and blow a grenade they’re carrying. The exact parameters of the ensuing explosion and effect will depend on the grenades that specific enemy has. In Legendary form, includes a passive buff that will reduce the cost of your next ultimate quickhack when you defeat enemies with explosions. Costs 14 RAM by default.

Force an enemy to commit suicide. In Legendary form, this quickhack comes with a passive buff that reduces the cost of ultimate quickhacks when you send an enemy into a panicked state. By default, costs 14 RAM in legendary form.

A non-lethal ultimate quickhack that will knock any target unconscious, quietly, in an instant. It’s great for stealth. The legendary version carries a passive buff where defeating enemies lowers the cost of your next ultimate quickhack. It costs 13 RAM by default.

The following quickhacks don’t actually have legendary forms, but only appear in lower rarities:

Age of Empires 4 is being played right now

Sony confirms PS Plus will have a "prominent role" in PS4, take-up has trebled over the last year • Eurogamer.net

Sony confirms PS Plus will have a "prominent role" in PS4, take-up has trebled over the last year • Eurogamer.net