Cyberpunk 2077 Tapeworm and Chippin’ In | Should you give Johnny control?

By this point in Cyberpunk 2077, V and Johnny Silverhand have been through a lot together, and the Chippin’ In quest marks the start of them beginning to get along.

With the events of I Walk the Line in Pacifica behind the pair, and their story with Takemura heating up, Act 3 of the game marks the final stretch before the end-game.

With the realisation that he might soon be gone for good, Johnny asks V to make good on some of the misdeeds of his life. He’ll be able to finish off what he needs to by taking control of their body with the help of Misty’s pills. but V has the final say.

Cyberpunk 2077 Tapeworm – Should you give Johnny control?

Tapeworm is a quest that’s popped up a few times throughout the game already, each time V has spoken to Johnny about their time together.

However, this time it’s more personal.

As you go through the sequence, ask him if he wanted to take the pill, then say that you believe him, before continuing through the window of the dive motel. 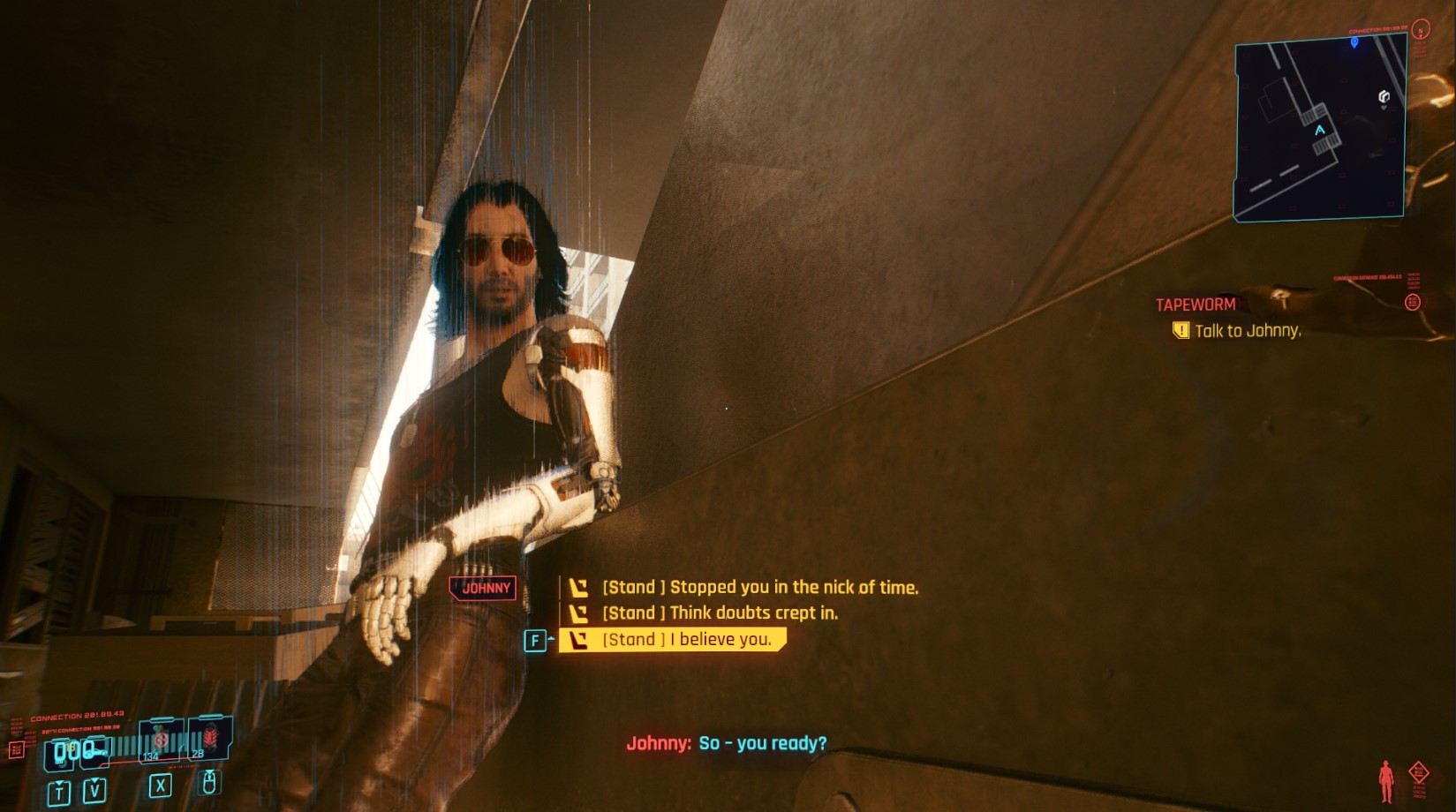 Open the compartment and hear Johnny out. He’ll level that he’d happily give his life for yours, and asks if you’d do the same. 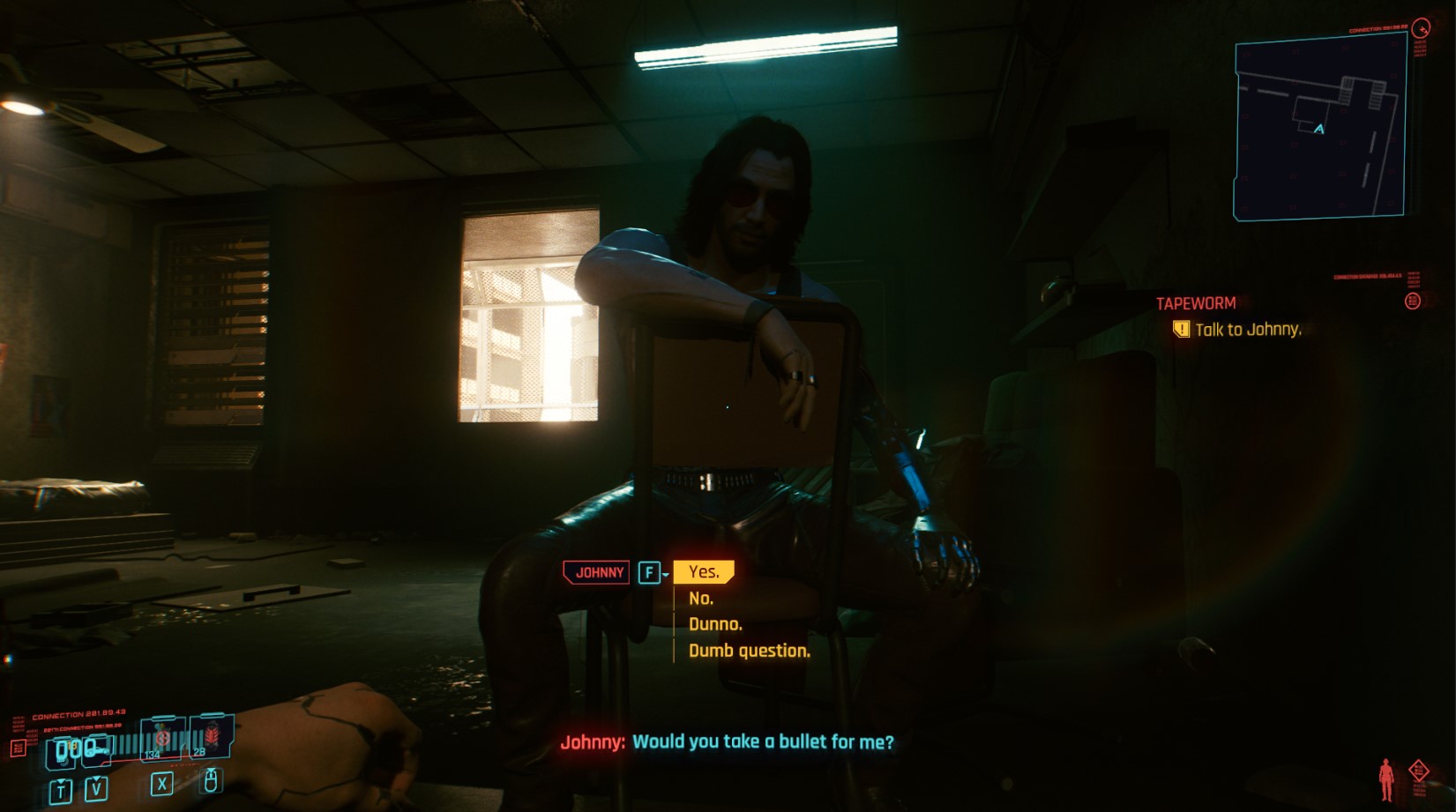 Say yes if you want to cement your relationship, and he’ll run through his list of regrets. Chief among them is that Adam Smasher is still alive, but there’s also loose ends with Rogue, his old band mates, and his legacy he still wants to resolve.

With that, he’ll ask to take over V’s body to take care of business, then he’s happy to let go. 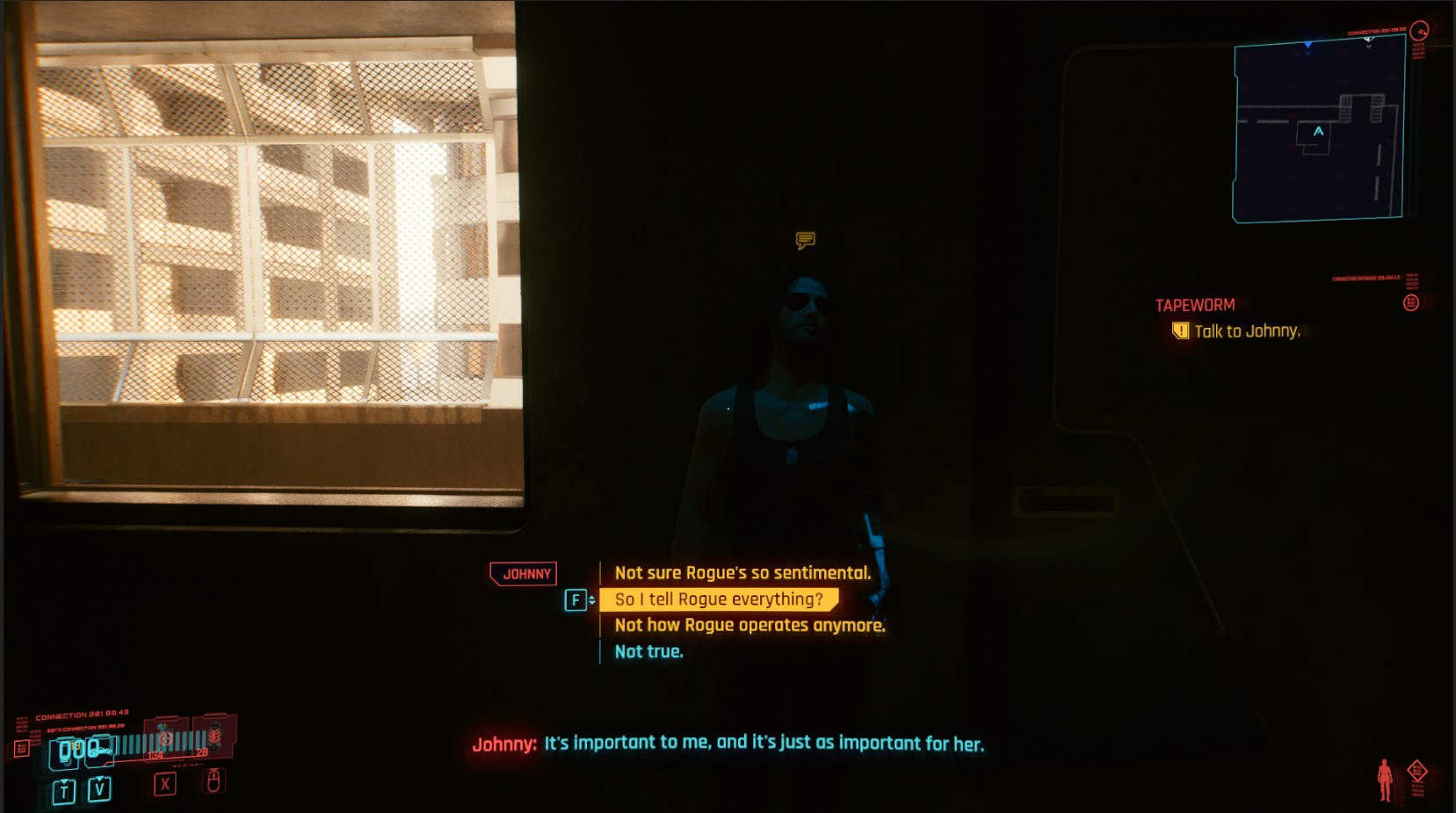 Agreeing to give Johnny control obviously figures in Cyberpunk 2077’s ending, but in the shorter term, unlocks a series of quests that you’ll definitely want to complete.

You don’t have to decide right then and there, but to complete these quests, you have to hand over the reigns to Johnny, and there aren’t any immediate ill effects.

Cyberpunk 2077 Chippin’ In – Should you get the goat, or the other one?

If you decide that you want to go ahead with the questline, make your way to the Afterlife bar in Watson with Johnny and take the pills. 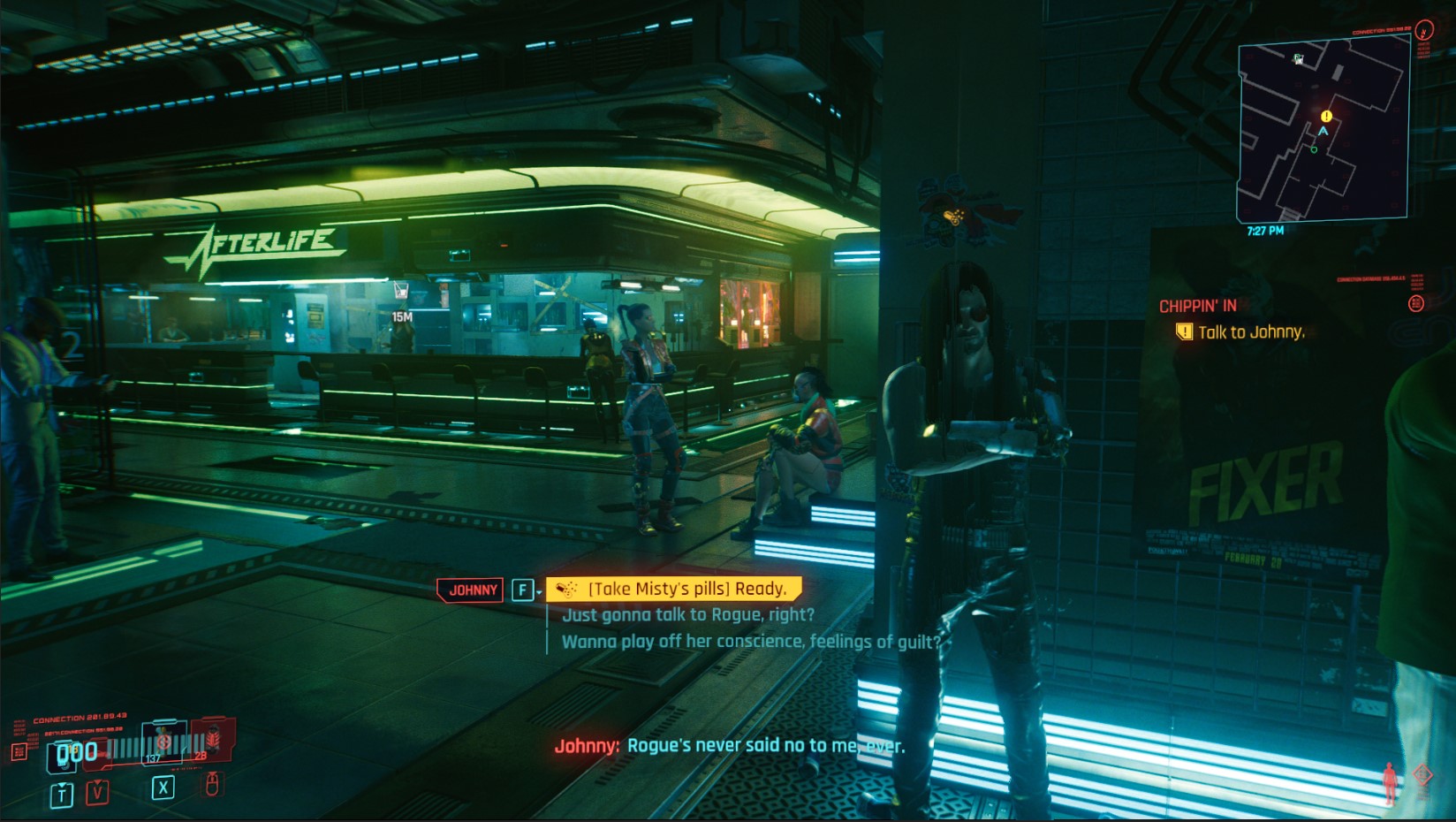 In the following sequence, if you want to stay true to the OG, then the tequila drink on the menu is the “Johnny Silverhand”.

Next, in the tattoo parlour, the goat tattoo is a goat – as you’d expect. “The other one” is a heart with “Johnny” through the middle. You can remove either at a ripperdoc later, because it replaces your hand cyberware. 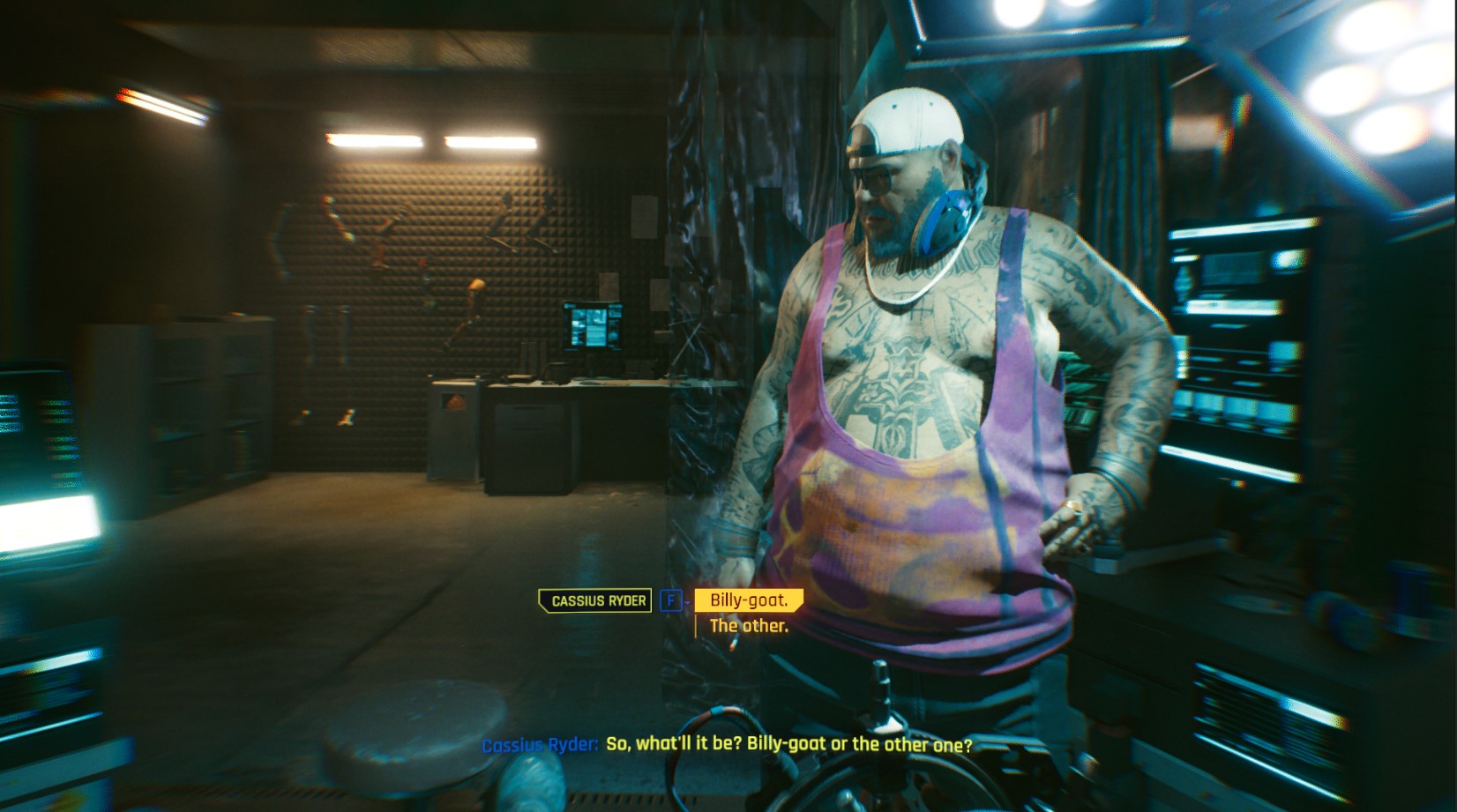 After that debauchery, you’ve actually got a lead on Smasher. Wait a day and Rogue will call with an update.

What’s more, you get Johnny’s Aviators and tank top in your inventory – even levelled up to be useful armour.

When she calls, Rogue will point you to a ship in the docks. So go see her at the Afterlife for the details. Then when you arrive, speak to Rogue and Crispin Weyland. 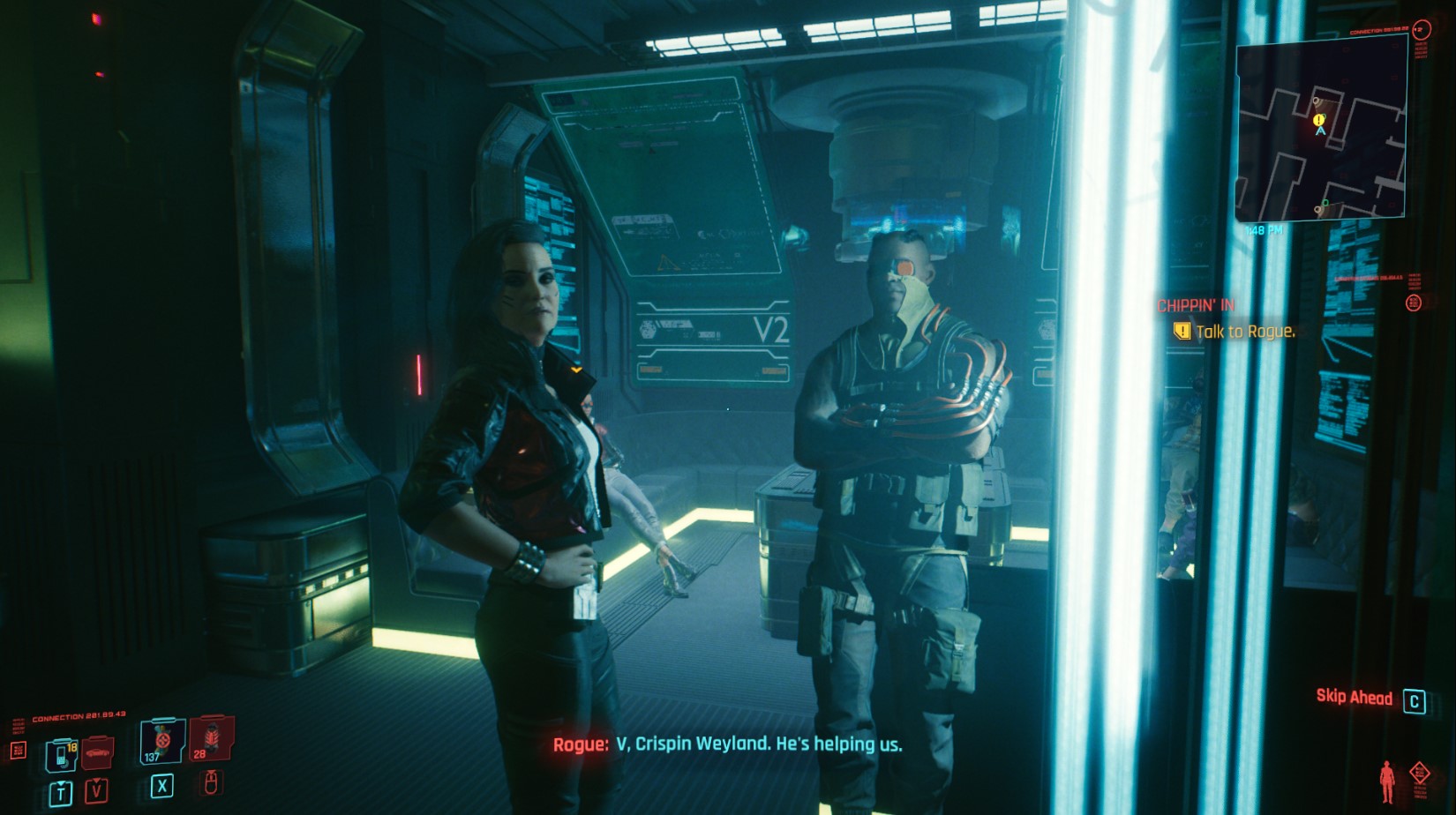 Hop in the car and enjoy your present before you set off for the mission.

When you arrive, you’ll wait ’til nightfall before heading out, then you’ll sneak into the docks following Rogue.

Even though you’re supposed to be stealthy, there’s no penalty for going in guns-blazing. But if you’re determined, keep left and jump up to the top of the shipping containers. 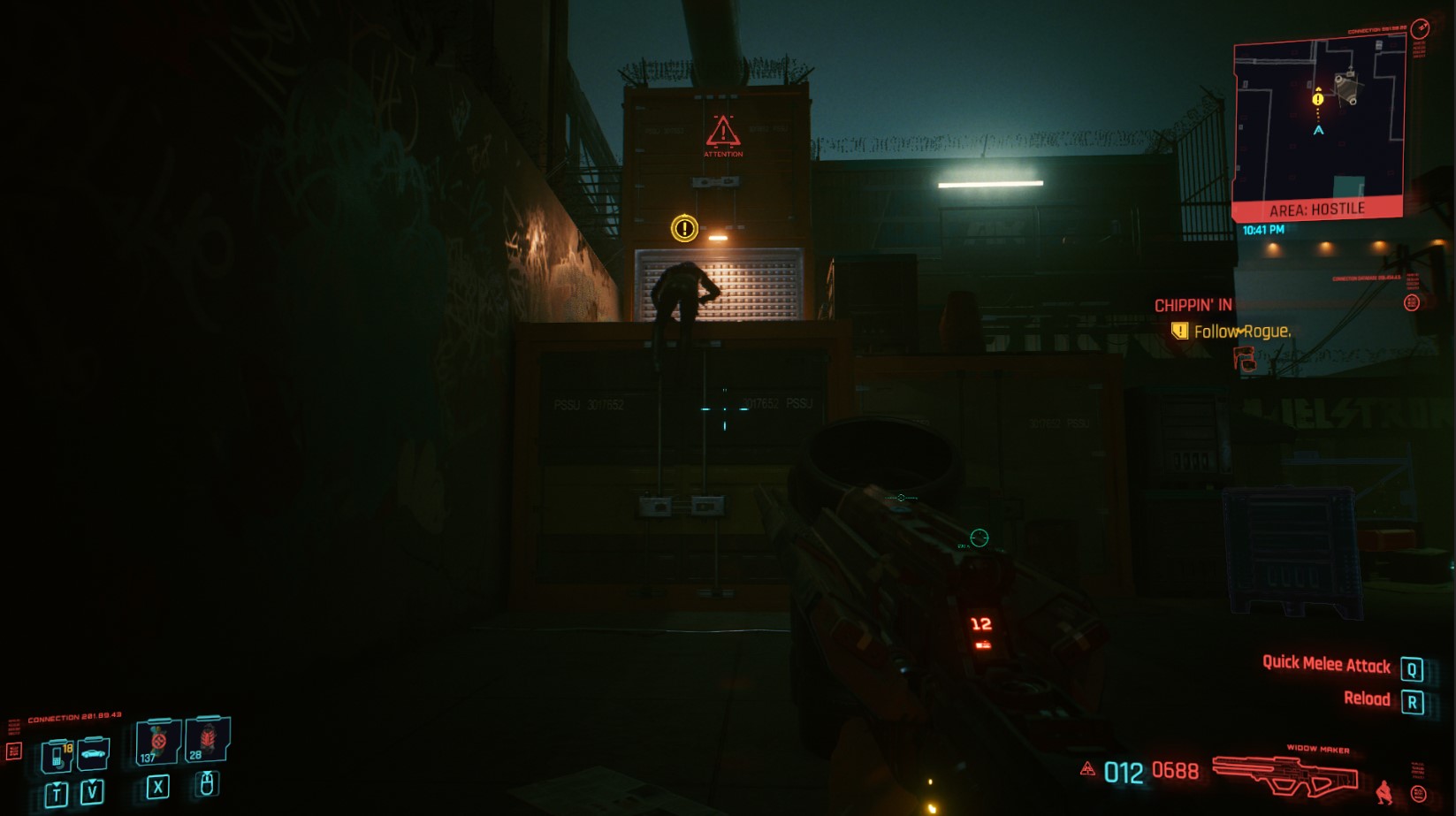 In the second area, ping a guard to get a lay of the land, then you should be able to easily sneak over to the data terminal by crouch-walking almost straight toward the quest marker. Although stealth sections like these are always much easier with the synapse cyberware.

You can also take a shortcut by breaking the fence with 9 Technical Ability if you bear to the right. If you don’t have the stats to get into the dataterm hut, smash a window with a melee weapon or sneak around the front side. 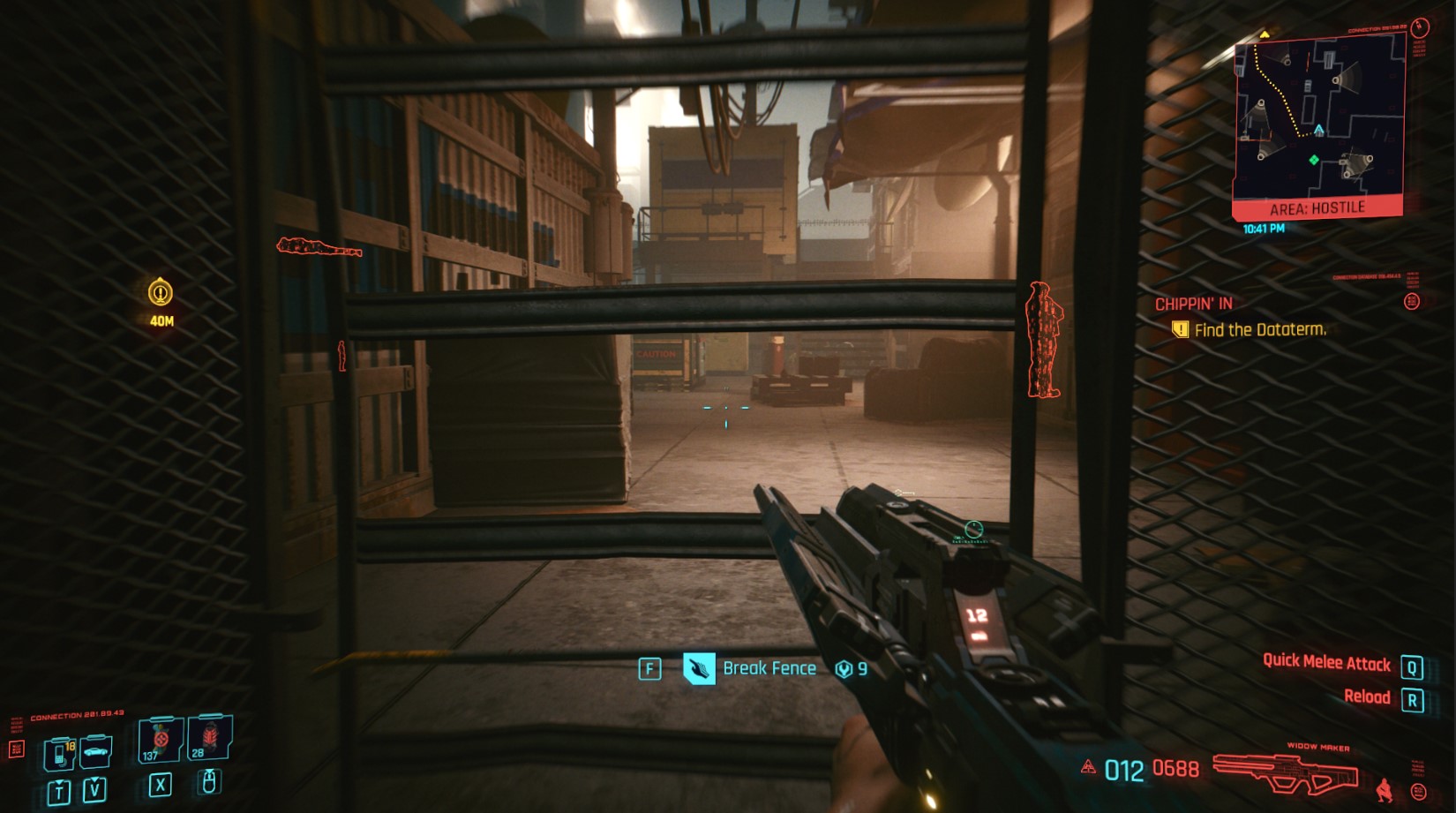 After you scan the computer, go through the room to your next marker, but be aware there’s a guard you need to let pass right by the left of the door as you leave. 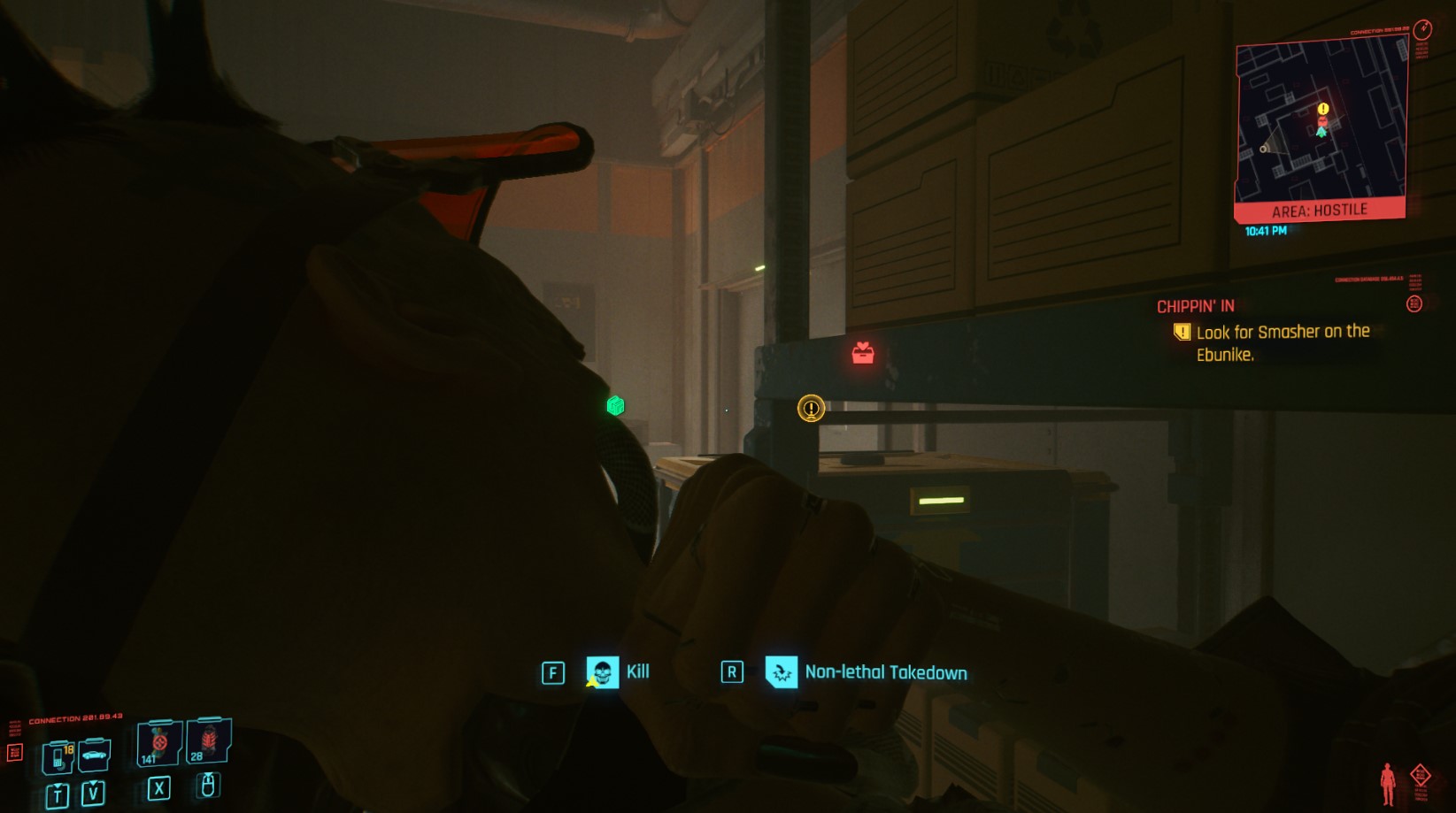 There are two guards in front of the ship to slip past when they’re looking the other way, then go up the stairs to the ship and search the deck. 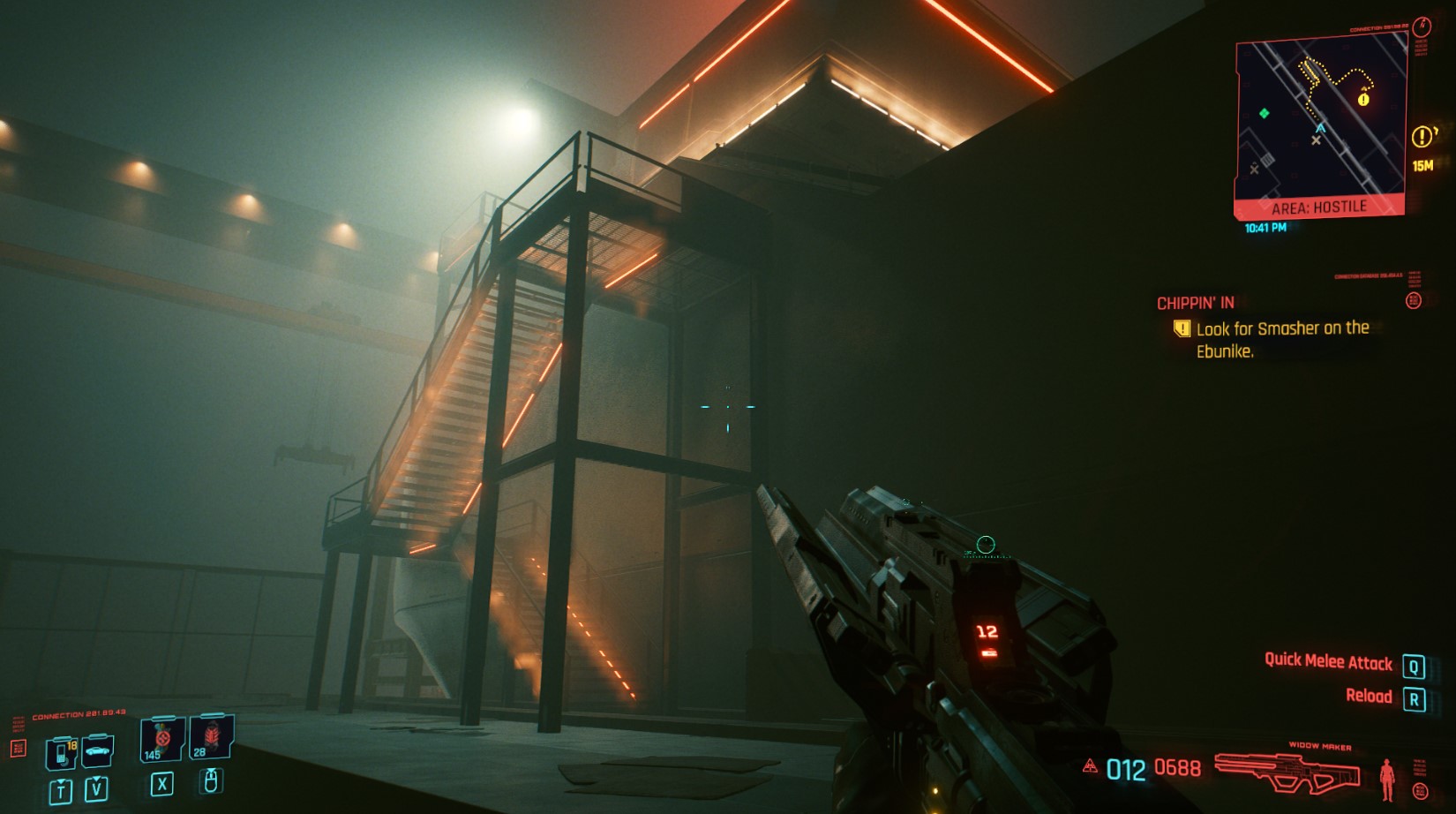 On the far end of the deck there are three guards who’ll spot you whatever you do, so now’s the time to go loud if you haven’t already and take them out.

Past those guards, you’ll find Grayson – who you shoot to wound and interrogate. As he slips, you get Johnny’s awesome pistol from the flashbacks.

Push him on the location of Smasher, and Grayson admits that he doesn’t know anything, but that Smasher will probably come looking for you either way.

As the conversation wraps up, he tries to bargain with his life for something of Johnny’s.

Rogue says you should just kill him anyway, and either way you’ll still get what he’s offering. 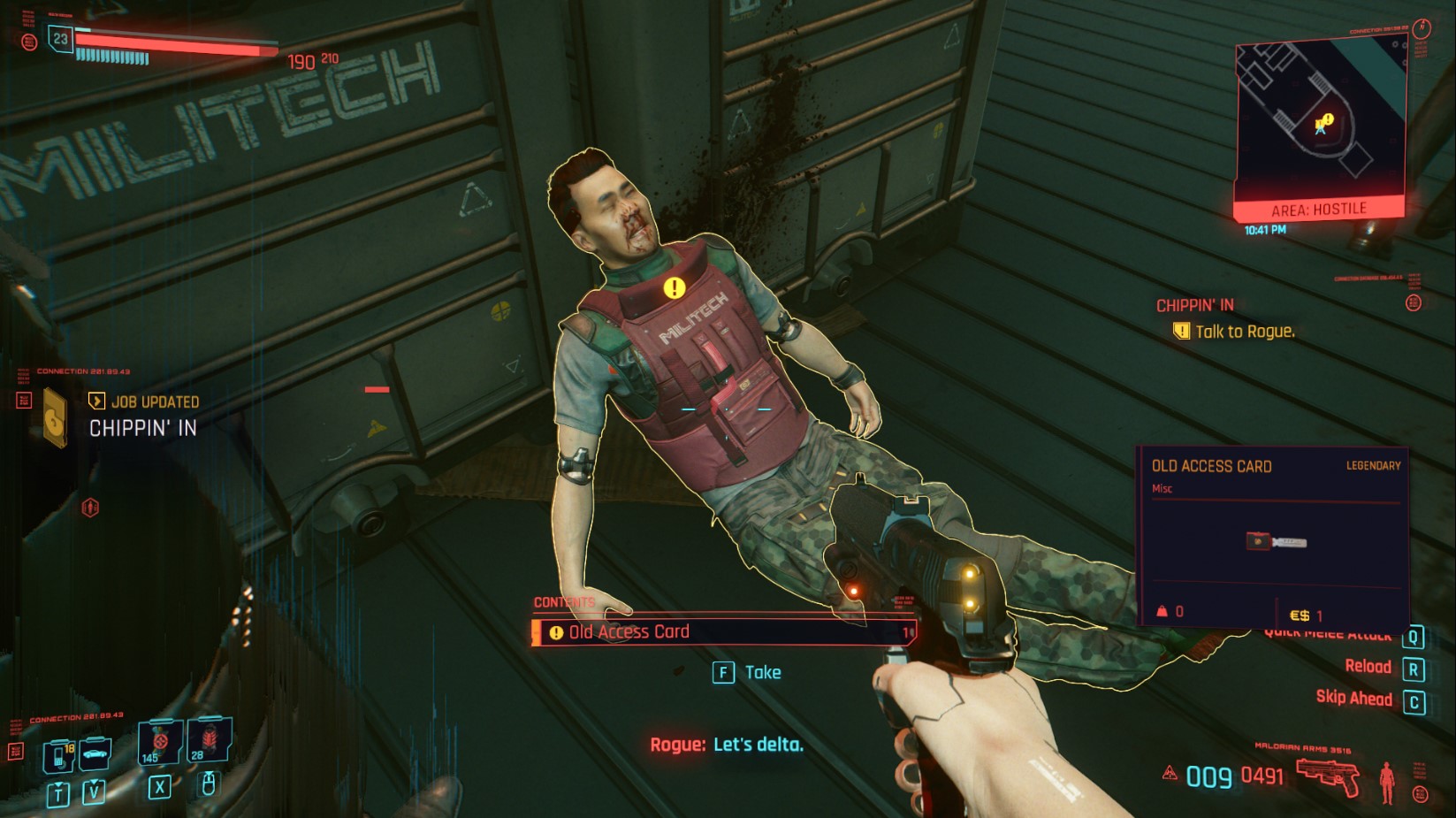 If you agree to the bargain, he’ll give you the Old Access Card, and tell you to drop the shipping container on the crane behind him.

Or if you decide to kill Grayson, you can just loot the Old Access Card off of his body and head over to the crane. 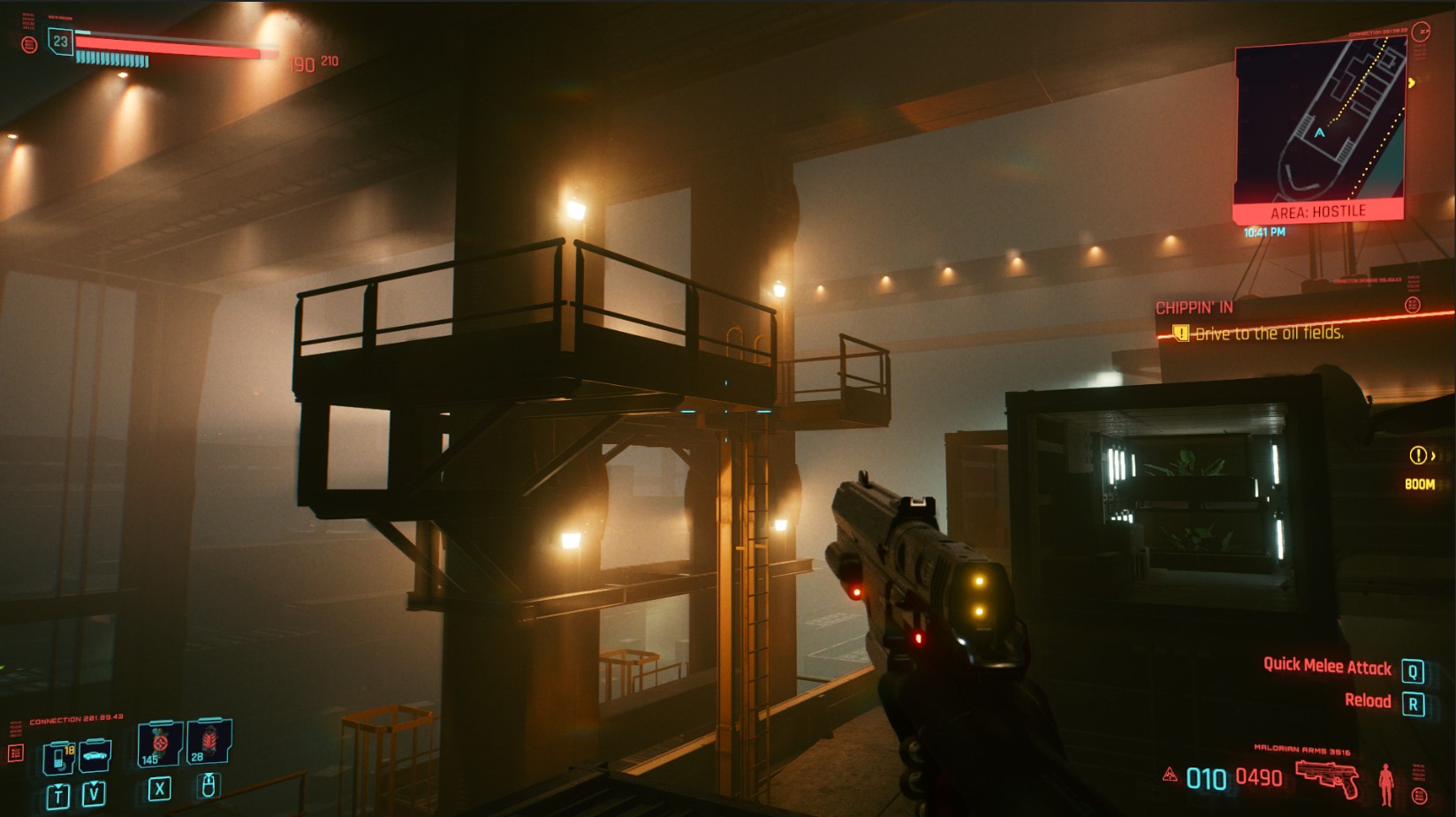 From the end of the ship where you are, go to the ladder over on the left and turn on the crane at the top. 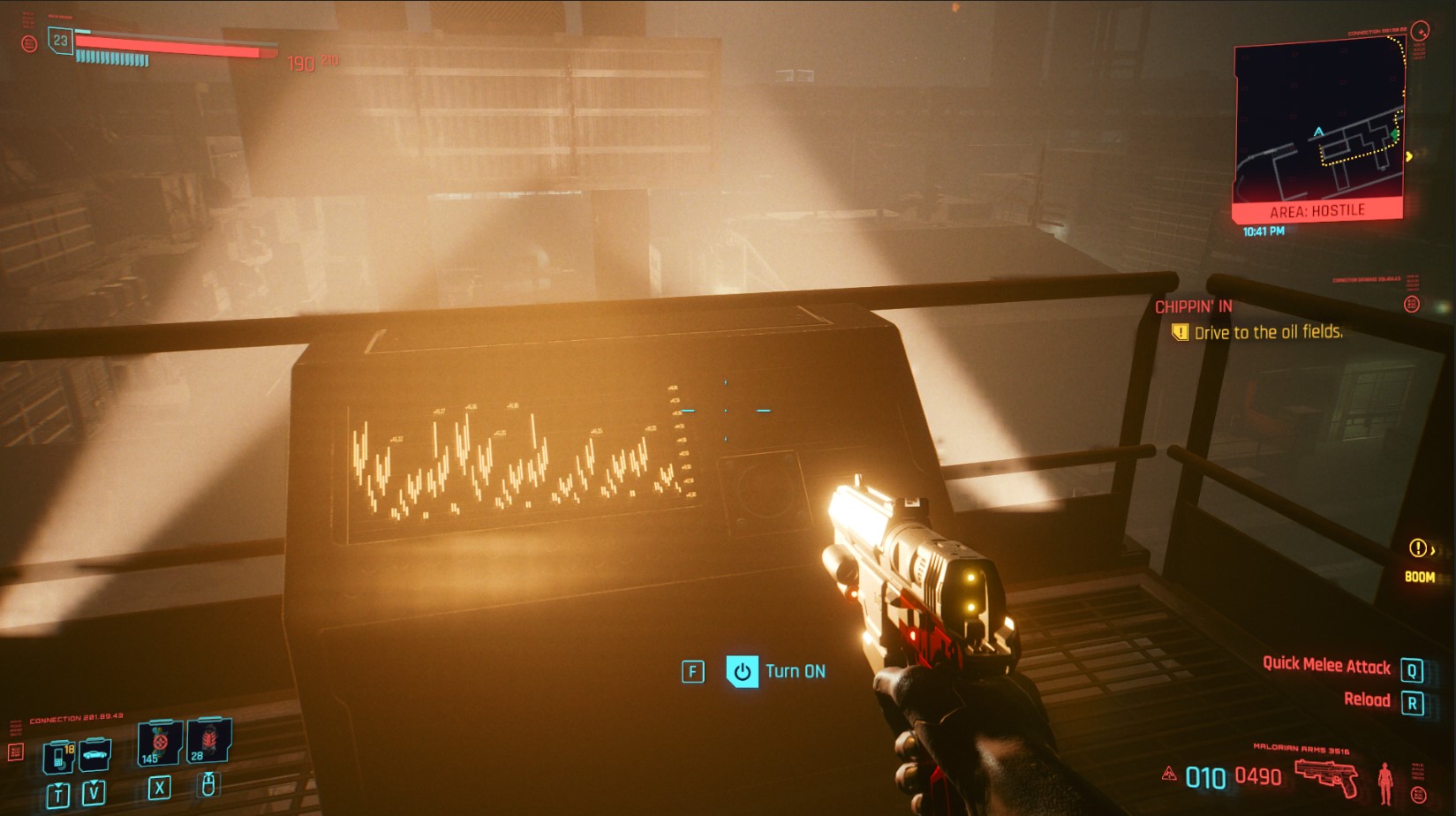 This lowers a container in front of you and inside is a very special prize. 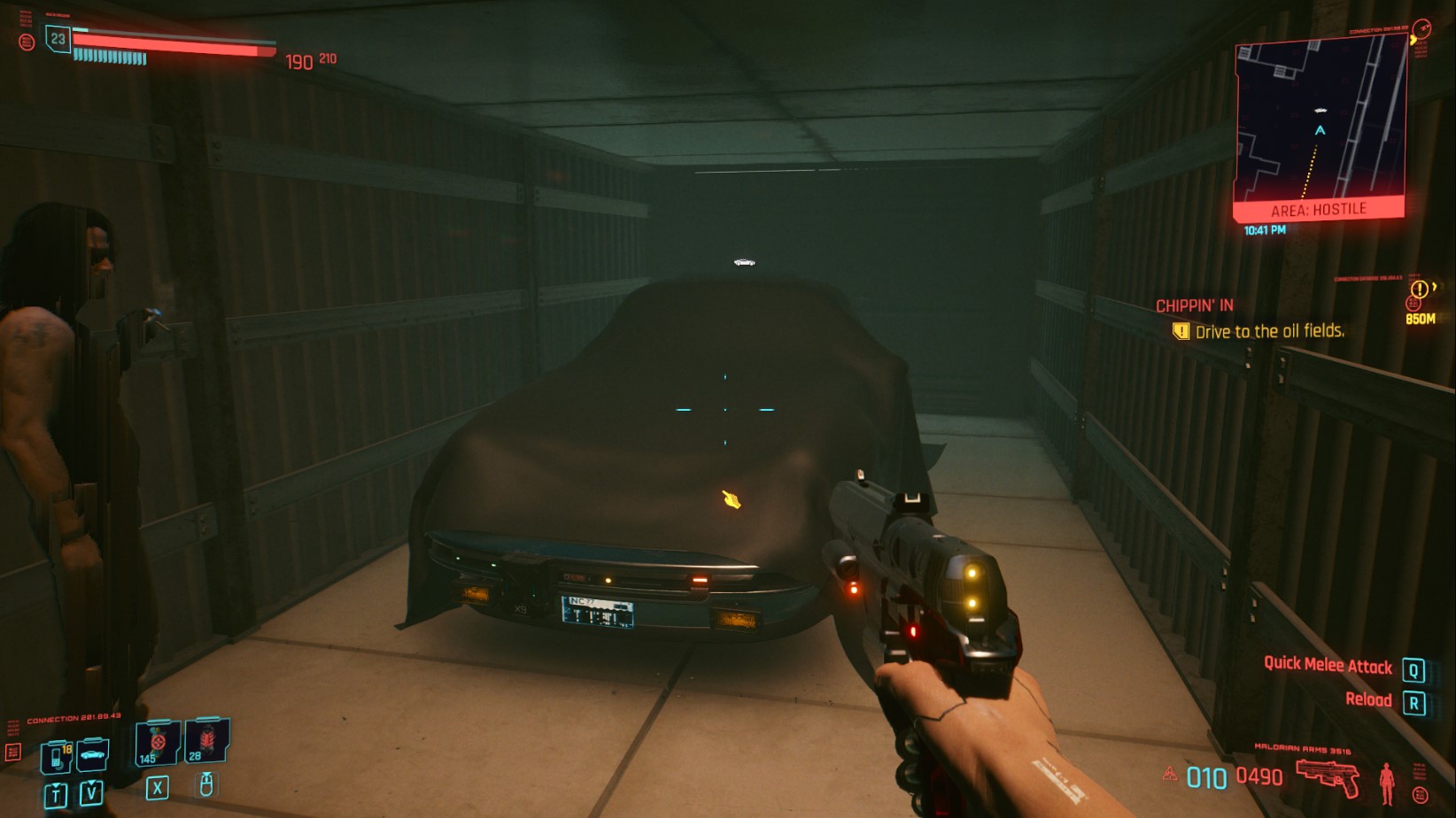 With the keys in your pocket, you can drive to the Oil Fields to complete the mission.

Speak to Johnny at his grave and set the world to rights. Be sympathetic to his feelings for maximum effect, but this is the moment that really cements your friendship. 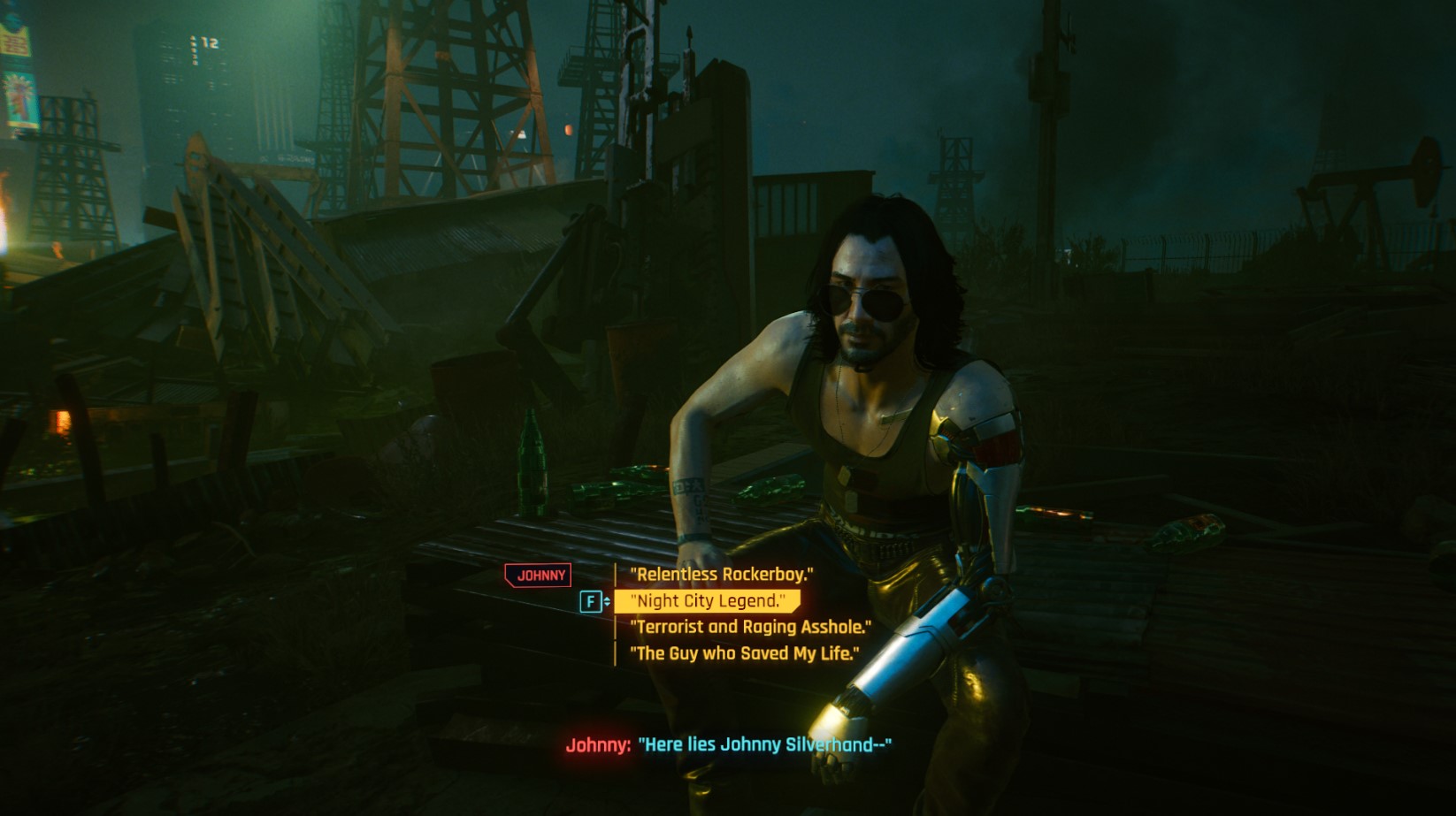 Agree to try and patch things up with Rogue, and this sets you off on the next series of quests with Johnny’s oldest friends.

Cyberpunk 2077 updates: What to expect from future patches

Cyberpunk 2077 updates: What to expect from future patches