Cyberpunk 2077 Violence Quest | How to complete the Grimes quest

As you go about your business in Night City, a cryptic message from an unknown sender appears. This leads to Cyberpunk 2077’s Violence quest, featuring the real-life musician, Grimes. In fact, even the quest title is a reference to one of her songs!

After the message pops and you get the quest notification appear, read the text in your phone inventory.

Your first objective says to head to Room 210 at the No-Tell Motel – a place where you’ve had more than a few interesting encounters, and you’re about to have another.

From the entrance, head up the flights of stairs to the quest marker, opening the metal grate into a dark hallway. 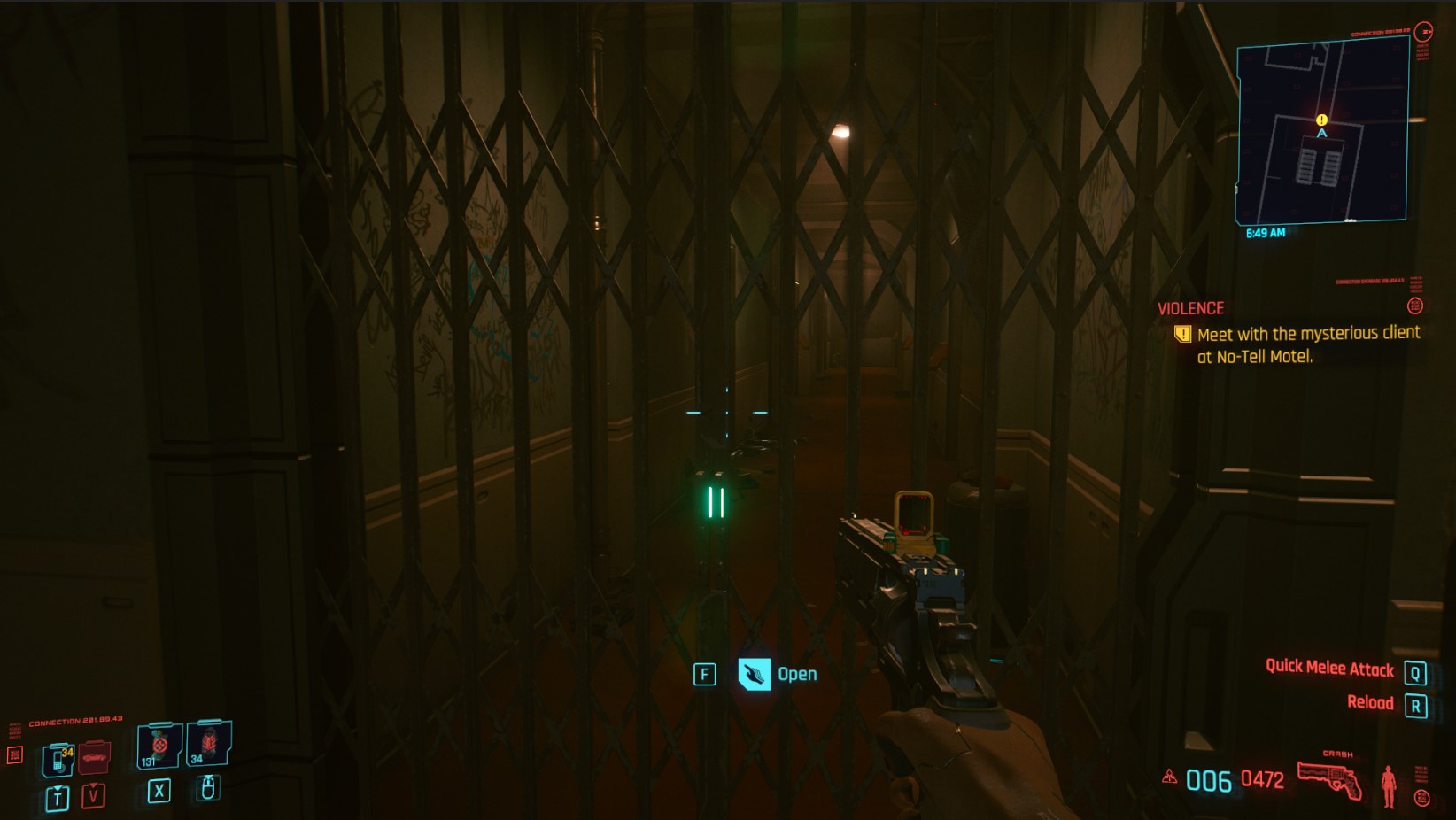 A few doors down you’ll find Room 210, so open the door and meet the “mysterious woman” inside. 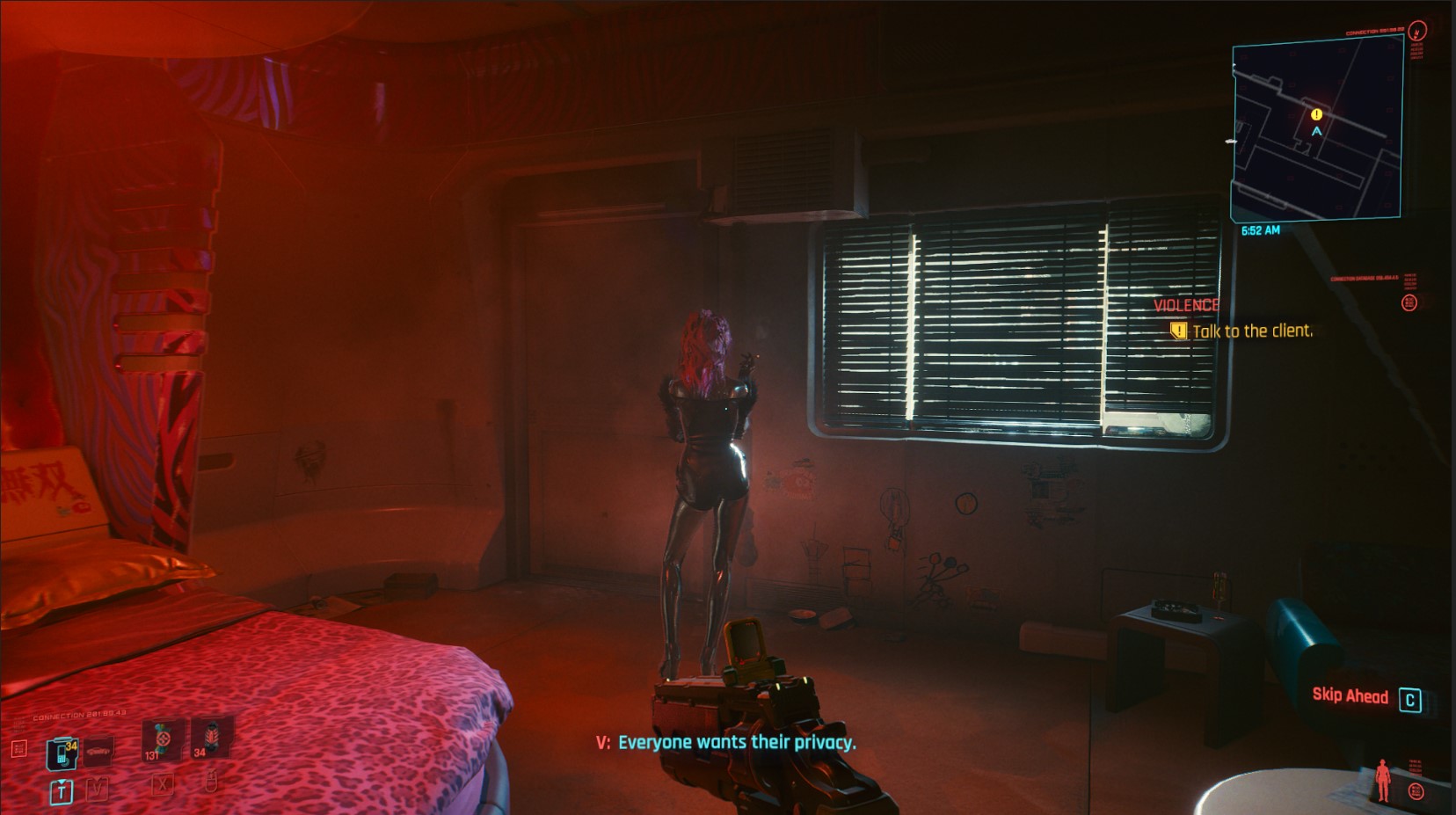 Here you’ll meet Lizzy Wizzy, an infamous Night City pop star who took her own life on stage, only to replace her body with Cyberware and continue the concert. That would be notable enough in itself, if she weren’t also voiced by Grimes, who provided some music for Cyberpunk 2077 too.

Sit and talk to Lizzy Wizzy, and she’ll say she’s in trouble. Her beau seems to be cheating on her, and it’s up to you to play PI.

With a little grilling it turns out you’re going after her manager, and she needs proof from his favourite nightclub to end things. 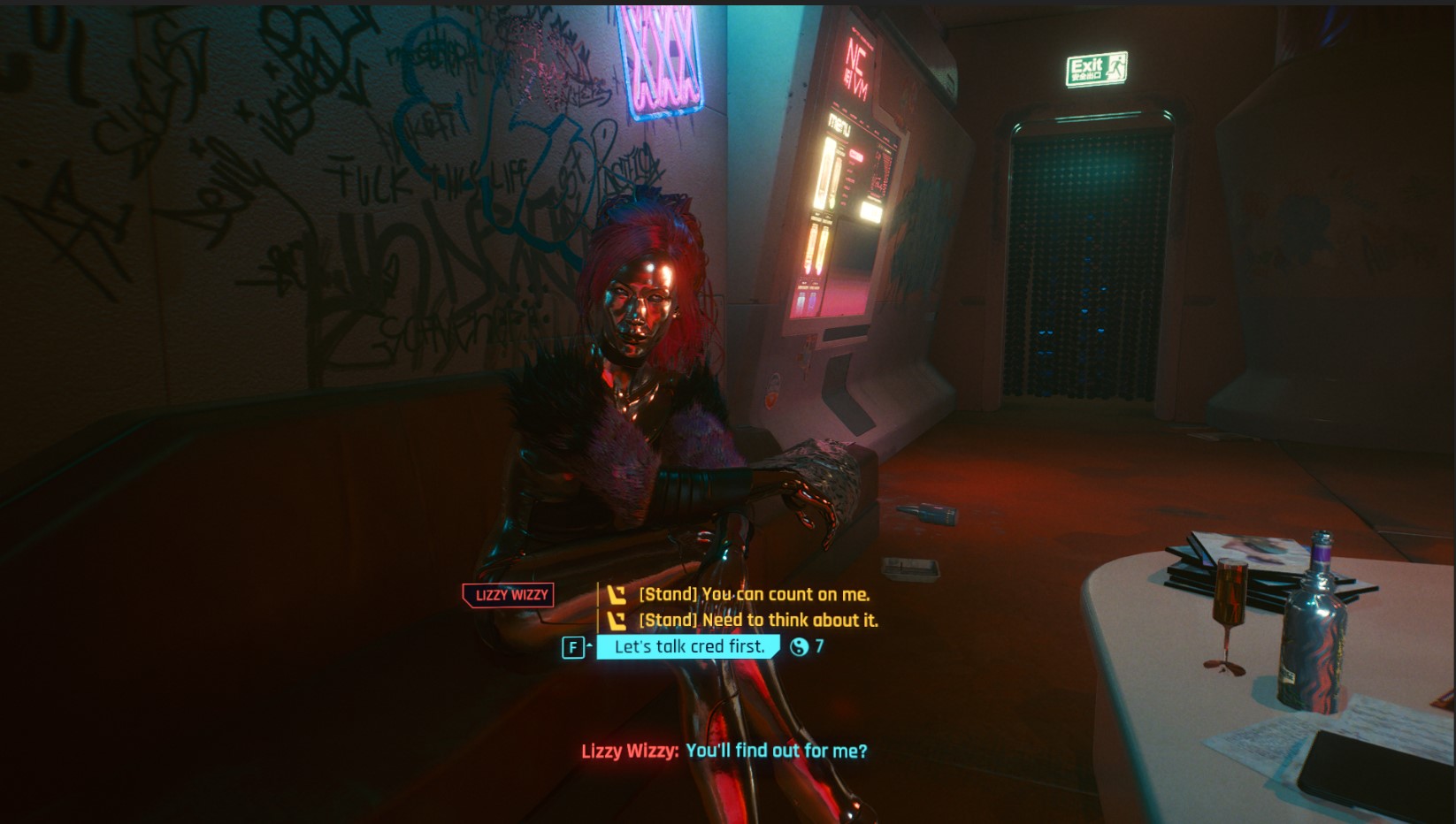 If you have 7 Cool you can dig a little more about your pay, but either way, it’s time to head to the club, Riot, for the facts.

Riot is only a little way down the street, but you need to wait to continue the quest at night. 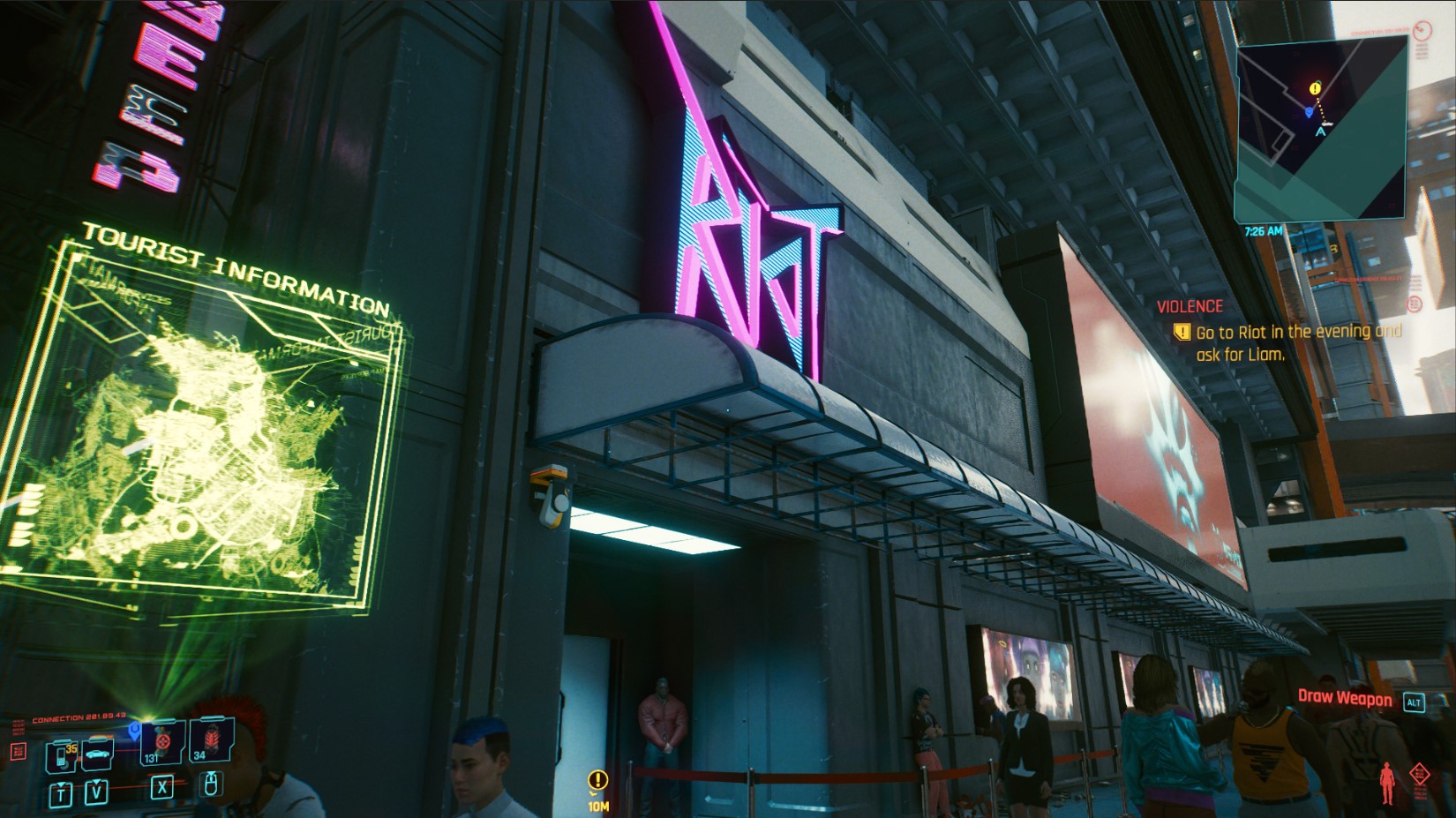 There are a few ways you can track down Liam:

To go the bouncer route, you can ask after Liam with the big guy at the door. To get the information out of his, you either need 11 Body, or you can use your Lifepath dialogue choice. 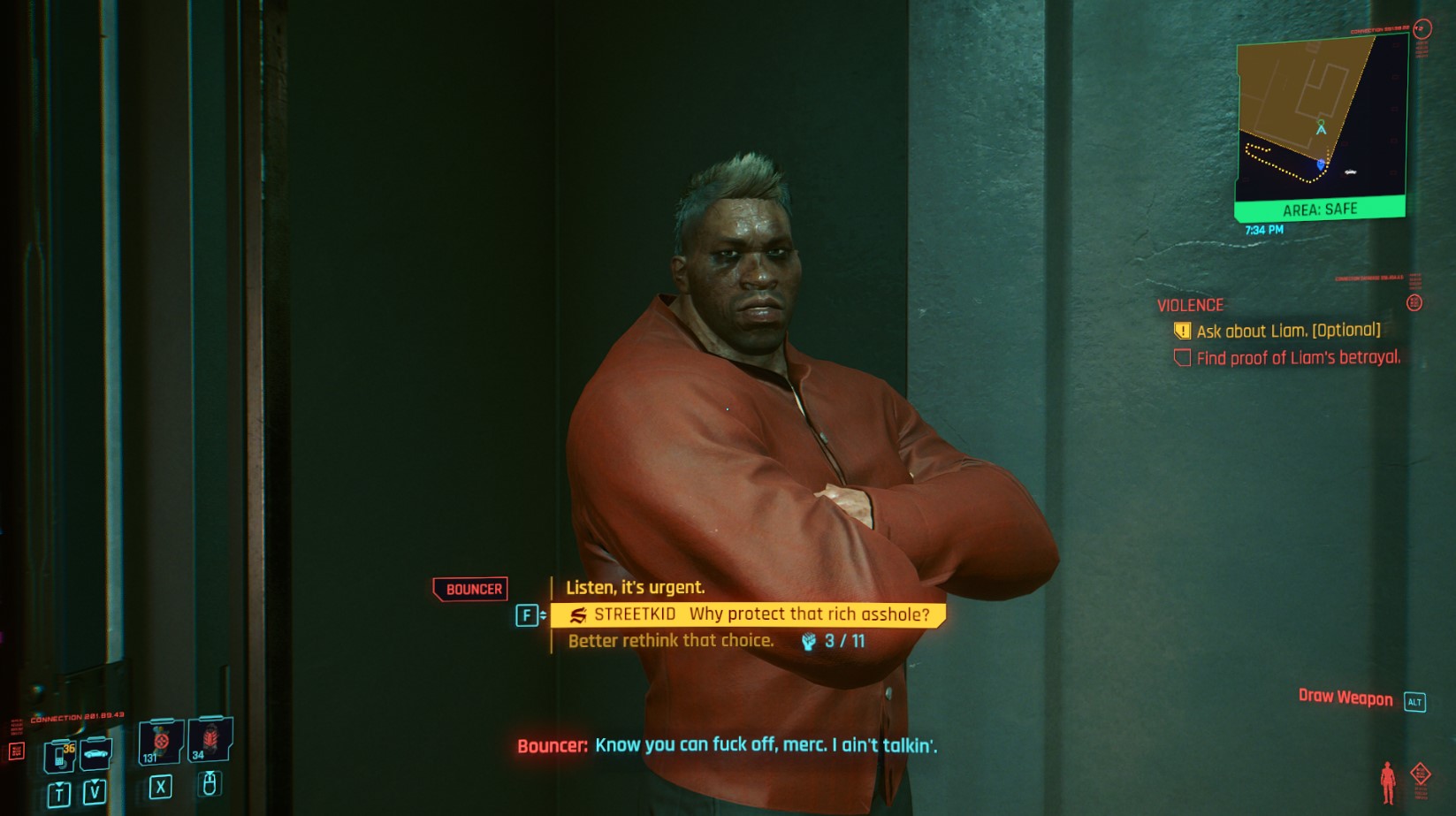 If you work the bouncer, they will give you a chip for the VIP room, which is on the second floor of the club at the far side of the dance floor, through where it says “Staff Only”. 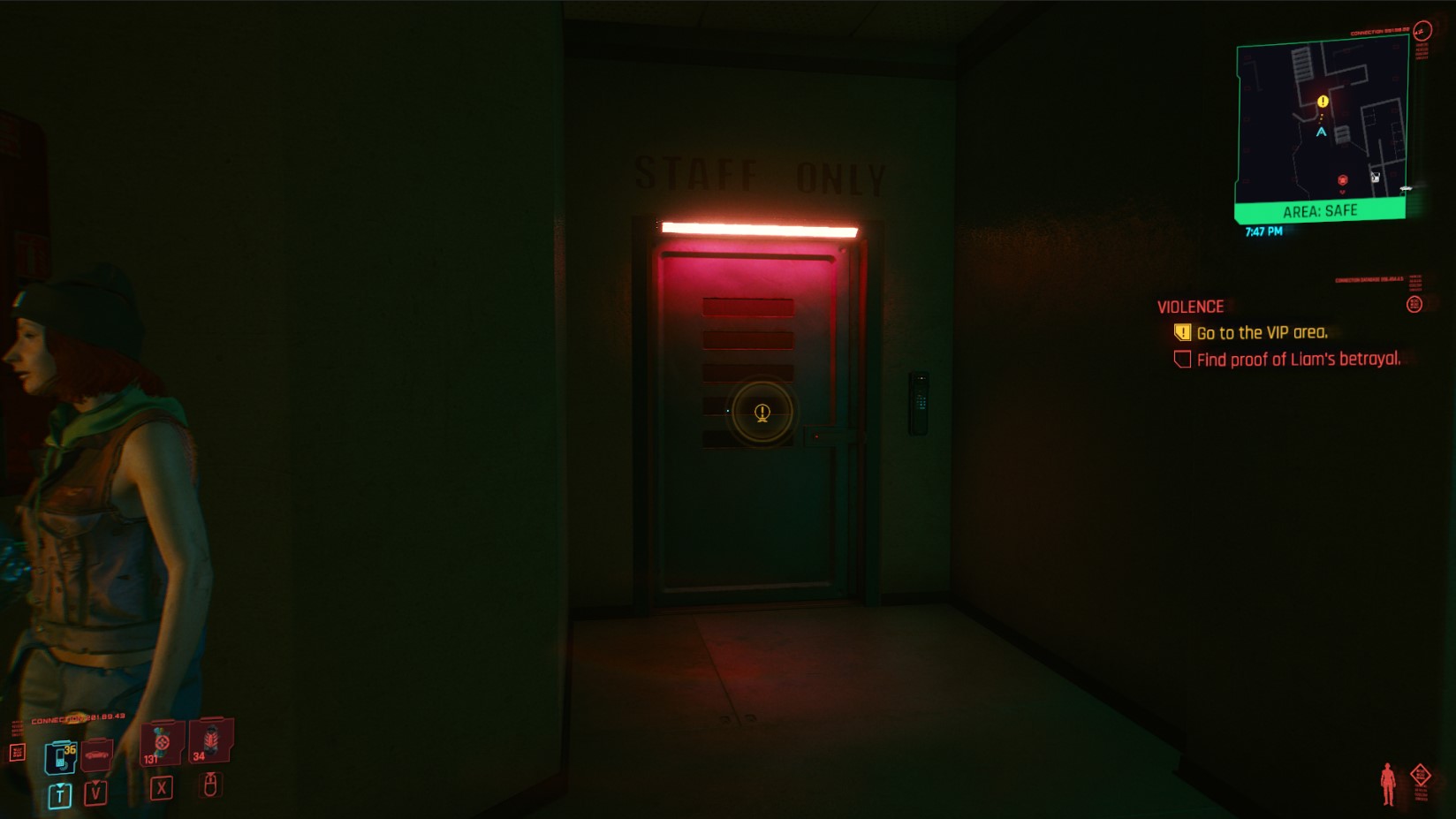 The second option is the easiest though. If you go around the left-hand side of the club and look up, there’s a fire escape ladder you can jump to. Go through the door on the fire escape and grab the employee badge from the desk. Now you can proceed to the Staff Only door. 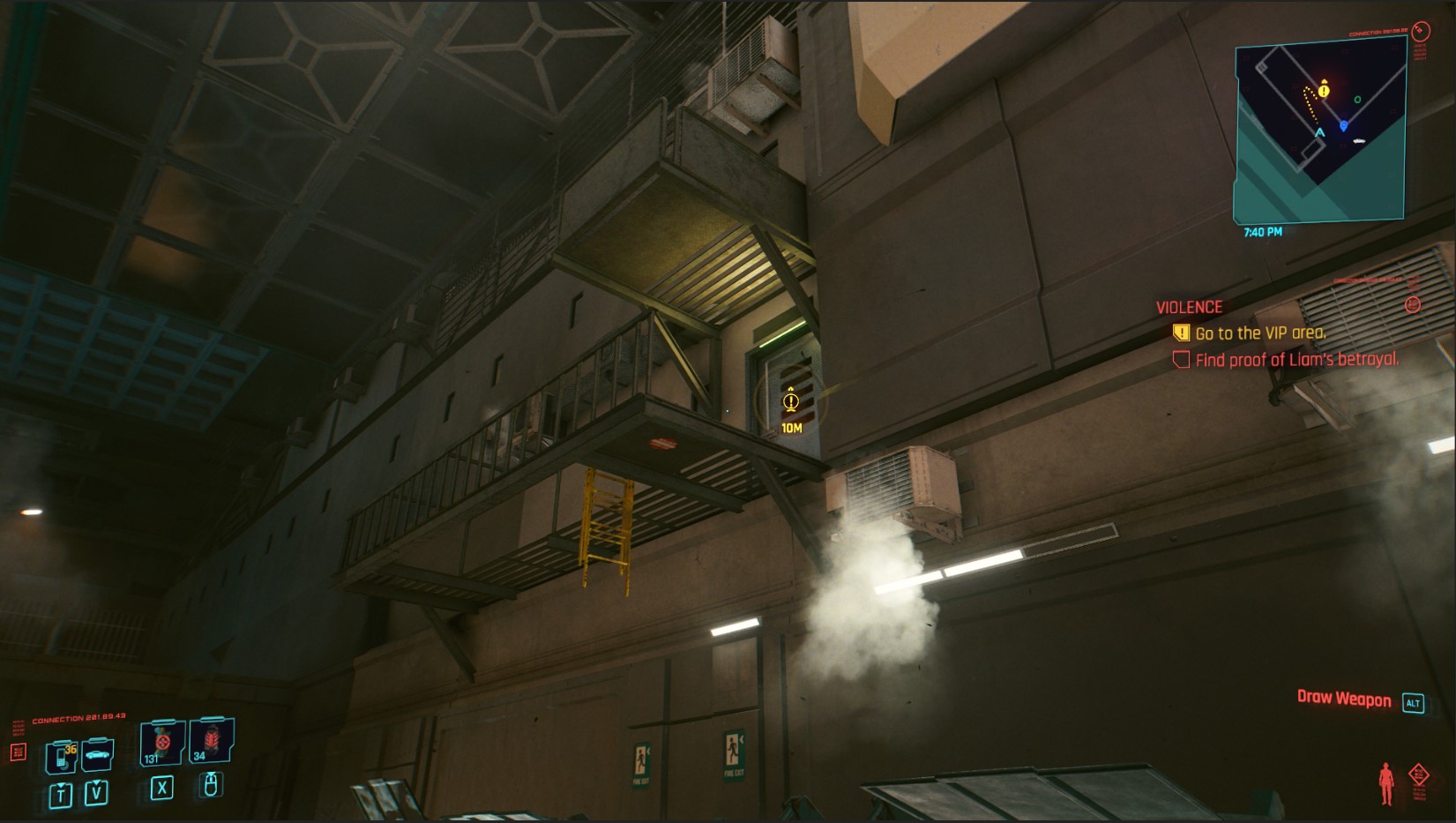 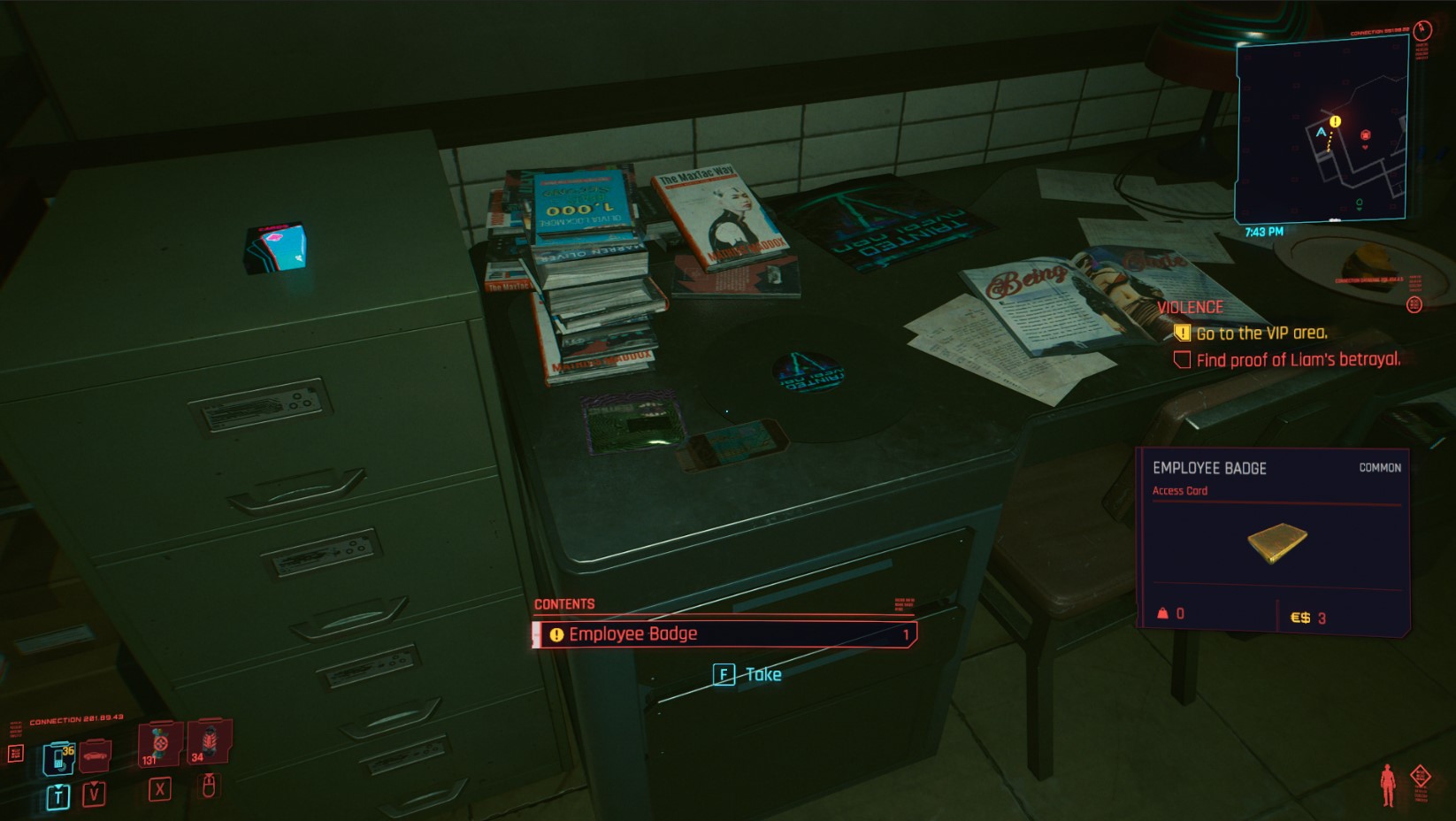 As soon as you go through that door look down the dark hallway to your right. Call the elevator to get down to the level below.

When you’re there, grab a load of eddies from the safe and use the computer on the desk. 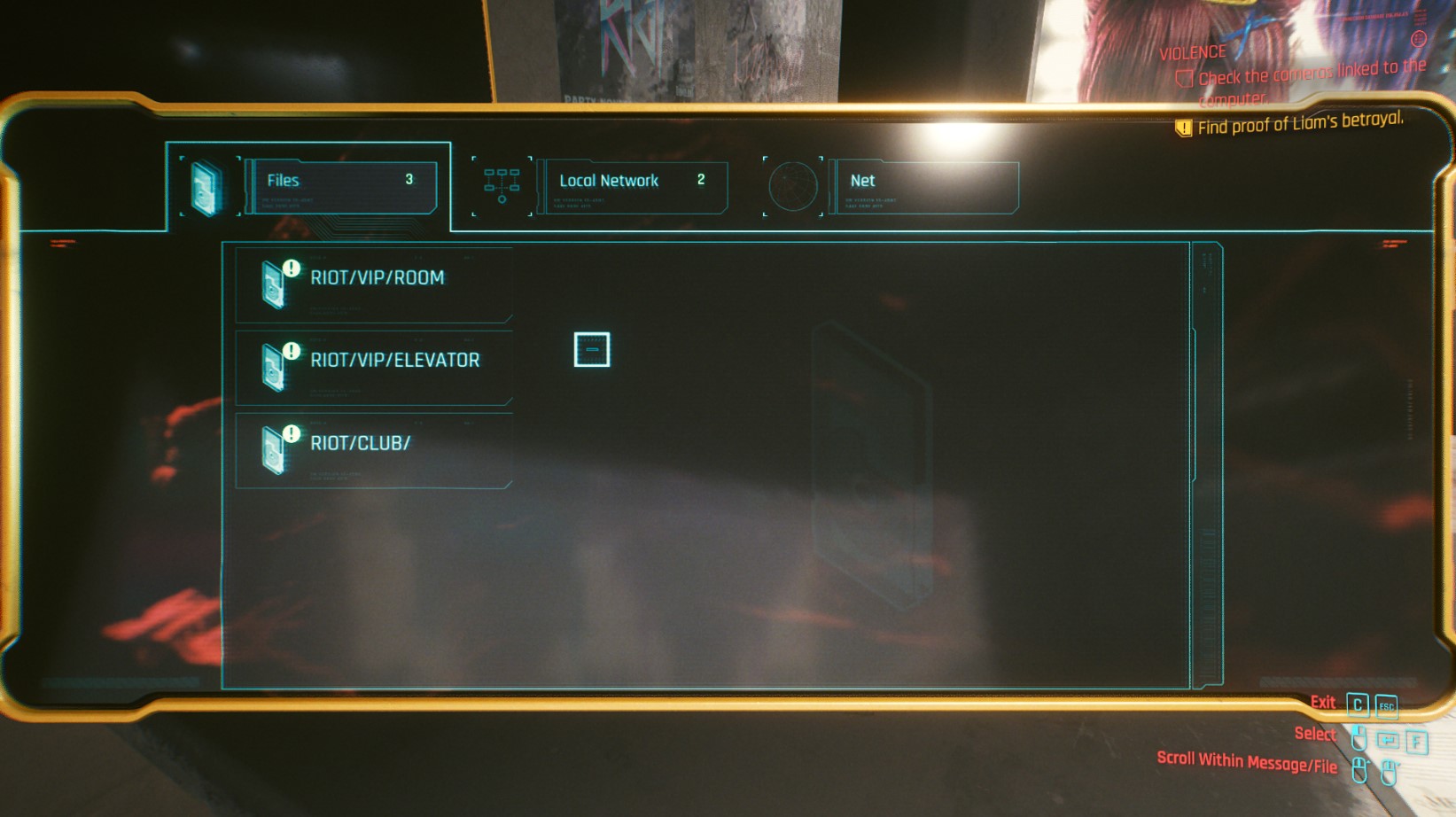 Read through the emails then go to the local network and take over the cameras.

The first camera is what you want: Liam speaking to an Arasaka rep about the Relic. Turns out he wants to make another backup of Lizzy, since she’s been acting strangely since her cybernetic conversion. 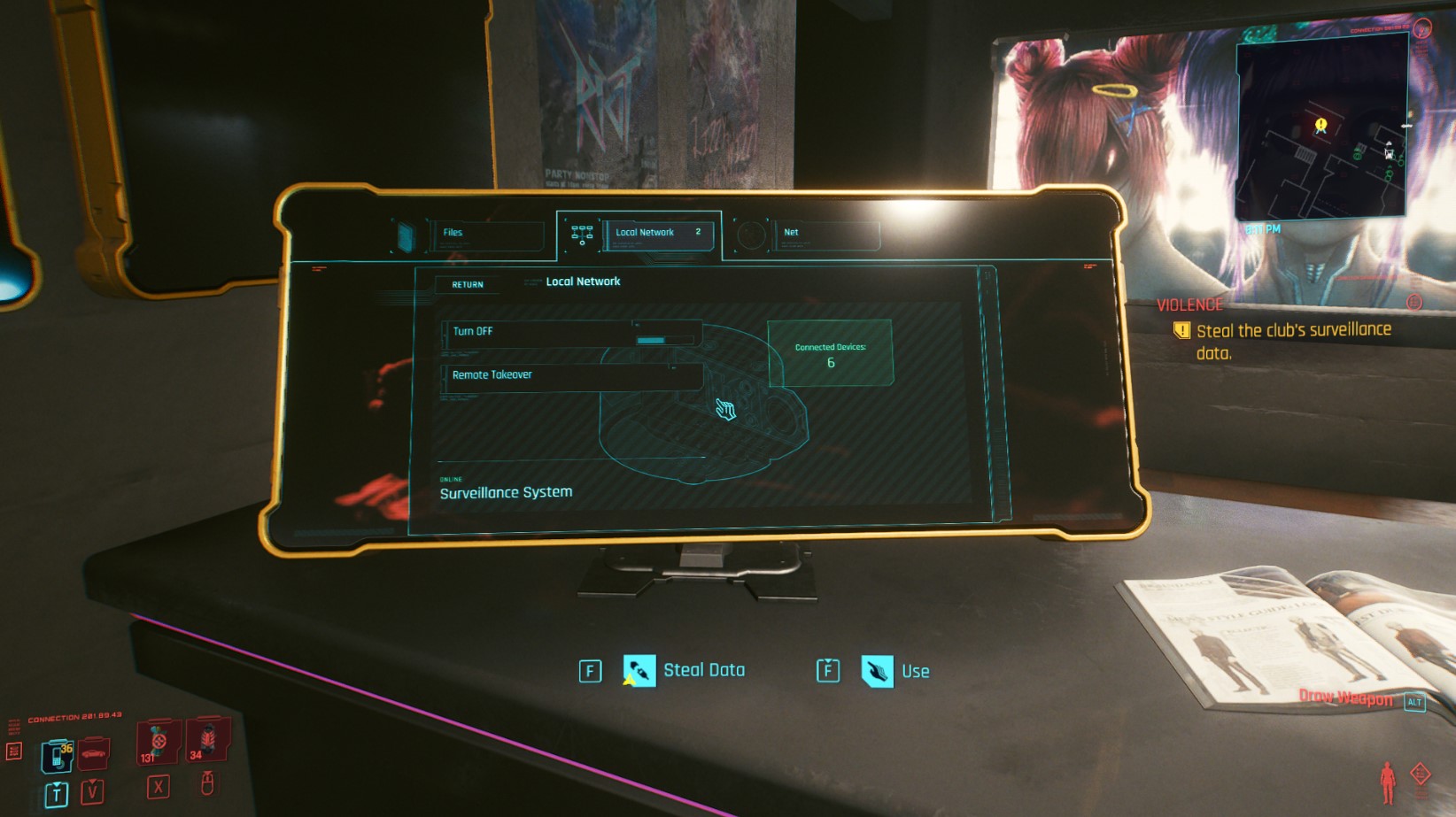 Talk to Johnny about what he thinks, then nab the security footage from the PC.

Now it’s time to call Lizzy and tell her what’s up. You can either tell her about Liam’s plan with the Relic by saying “It’s worse”, or just say he’s not being faithful – things seem to turn out similarly.

Choose to tell her about the Relic and you’ll get a bonus on your fee.

This ends this portion of the quest, but after a while, Lizzy will get back in touch. Return to the motel room to see what’s up. 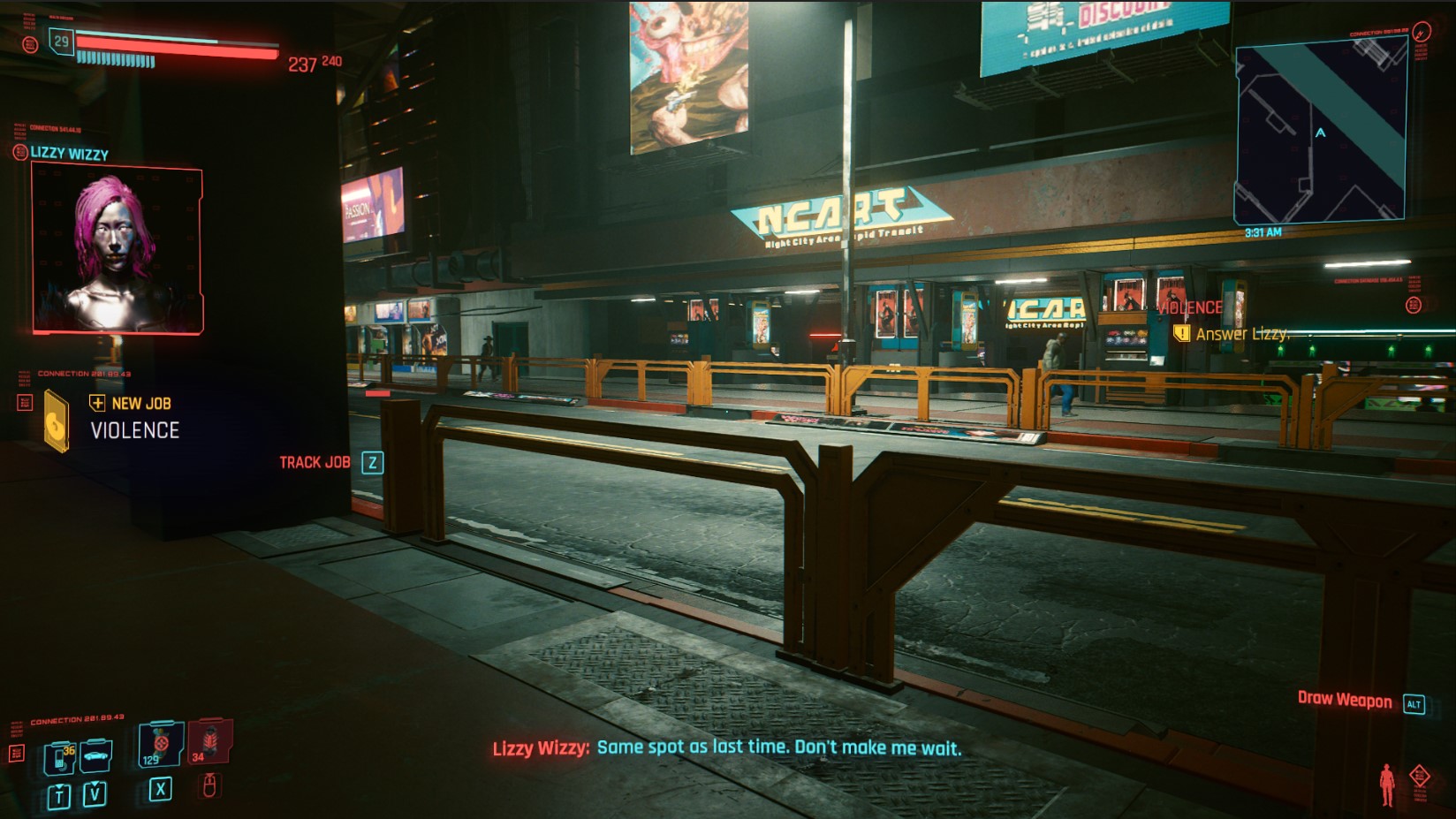 If you want to complete the job rather than fail it, then you need to agree to her request and deposit what you find in her room in the bin at the end of the hallway outside on the left. 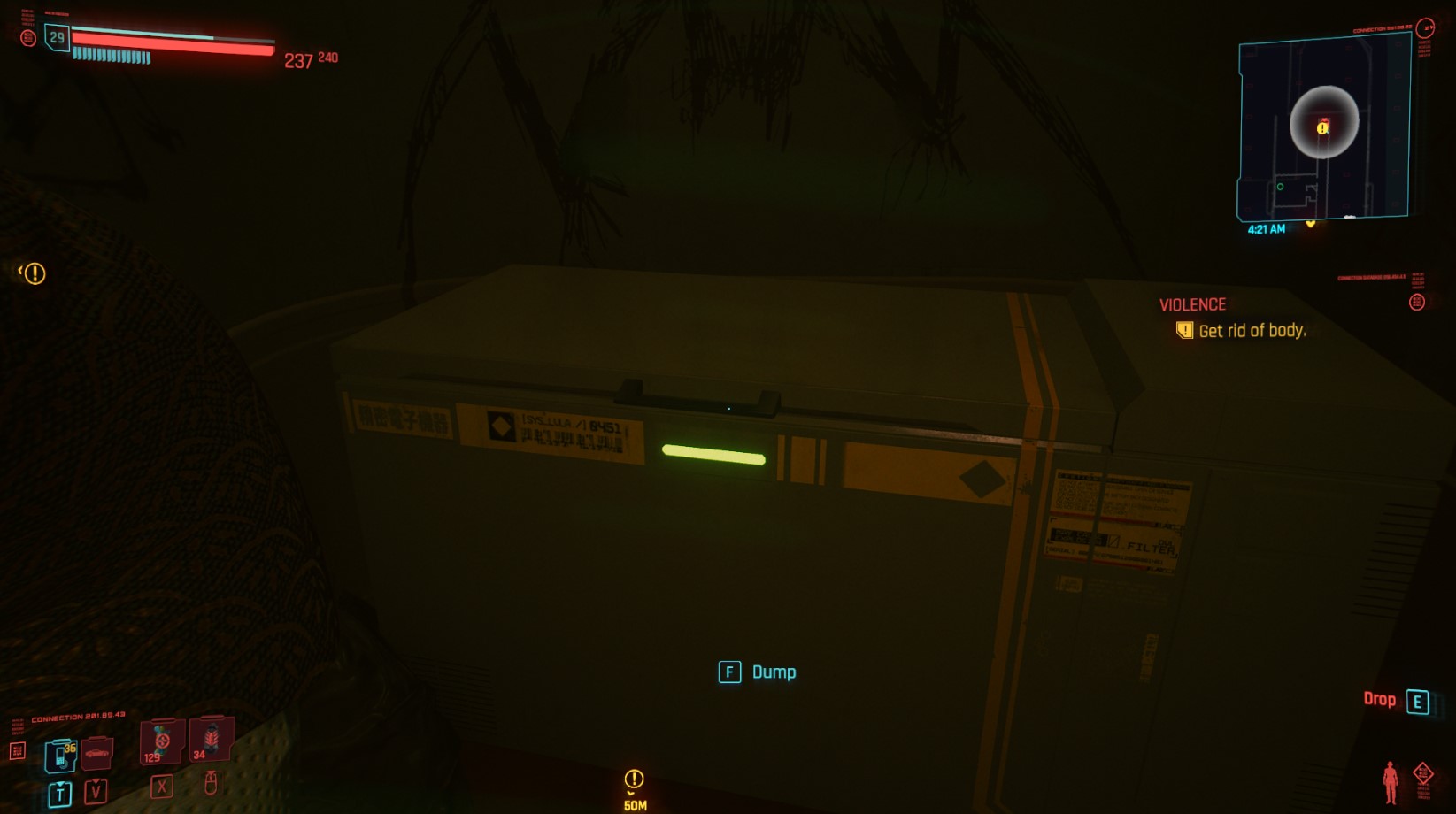 The fallout of this quest will continue with Lizzy sending you messages periodically, but this part of Violence stops here.