Destruction AllStars Guide: Tips, Tricks, and How to Win

Destruction AllStars is the latest PlayStation 5 exclusive from Sony and Lucid Games. Initially free to all PS Plus members, it’s a fast-paced multiplayer game with a focus on vehicular mayhem. If you’re new to the experience, it can all seem quite complicated, but once you crack it, there’s an entertaining, fun action game at its core. In this Destruction AllStars guide, we’re going to provide some general tips and tricks for the game, as well as go over the basics, outline the Trophy list, and explain all the characters. If you want to know all there is to know about how to win in Destruction AllStars, this is the place to be.

Note: This guide is a work in progress.

Destruction AllStars: How to Play on PS5

Here are all the basics you should know about Destruction AllStars so you can head into the game with all the knowledge you need. 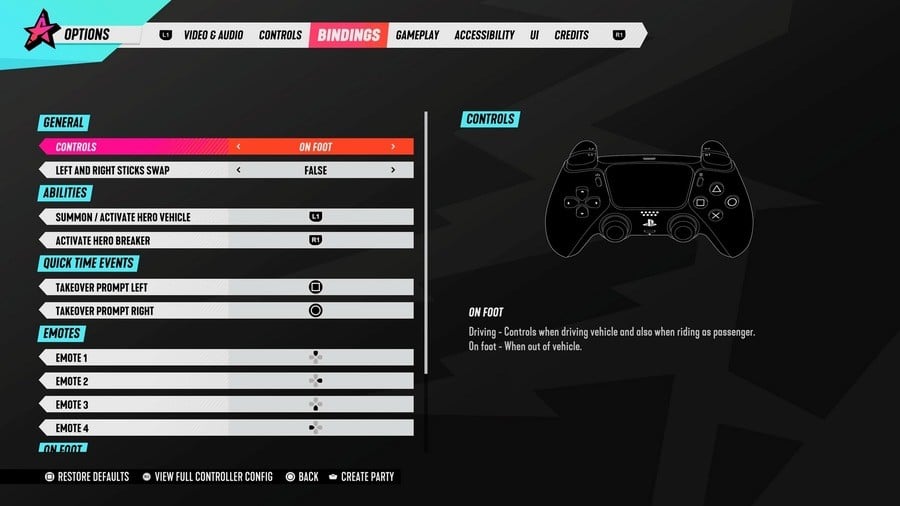 Here’s the default control scheme for Destruction AllStars. If you like, you can customise this in the Bindings section of the game’s Options menu.

There are currently four modes in Destruction AllStars, which you can play in online multiplayer or in the single player Arcade against bots. 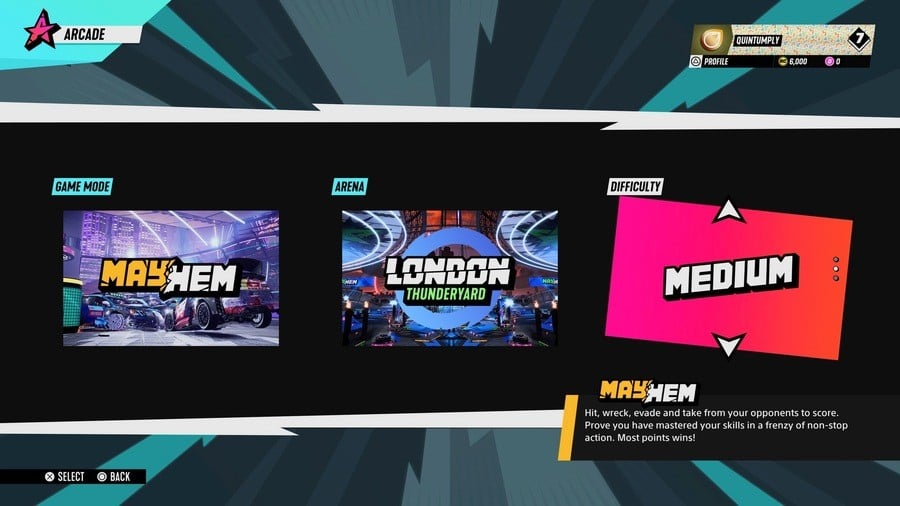 Mayhem: The “main” mode of the game. This is a free-for-all mode in which you compete for the highest score. To earn points, you need to deal damage to other players, wreck vehicles, and get KOs. On-foot, you can score extra points by dodging incoming cars and winning Takeovers. The winner is the one with the most points when the time runs out. 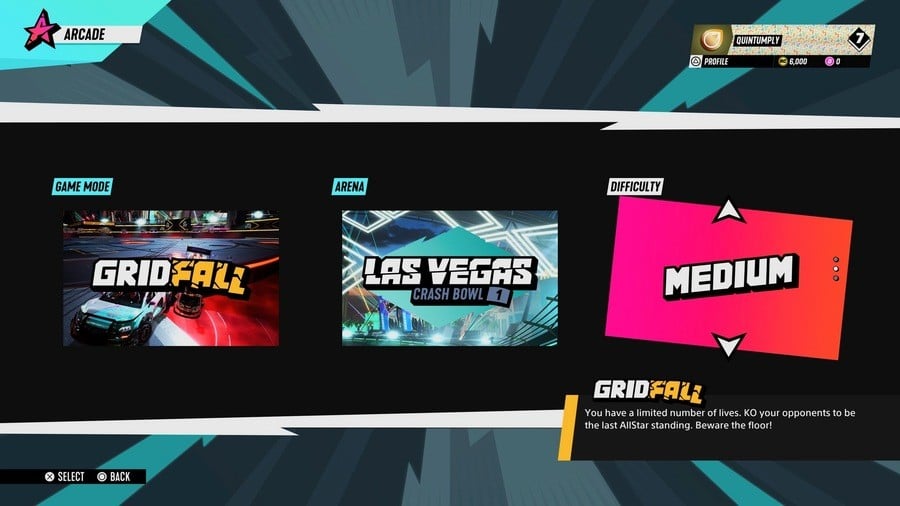 Gridfall: This is another free-for-all mode, but is quite different to Mayhem. In Gridfall, sections of the floor gradually give way, shrinking the play space as the match goes on. The last player standing wins. Everyone starts the match with a limited number of respawns, but you can earn more by knocking out your opponents. 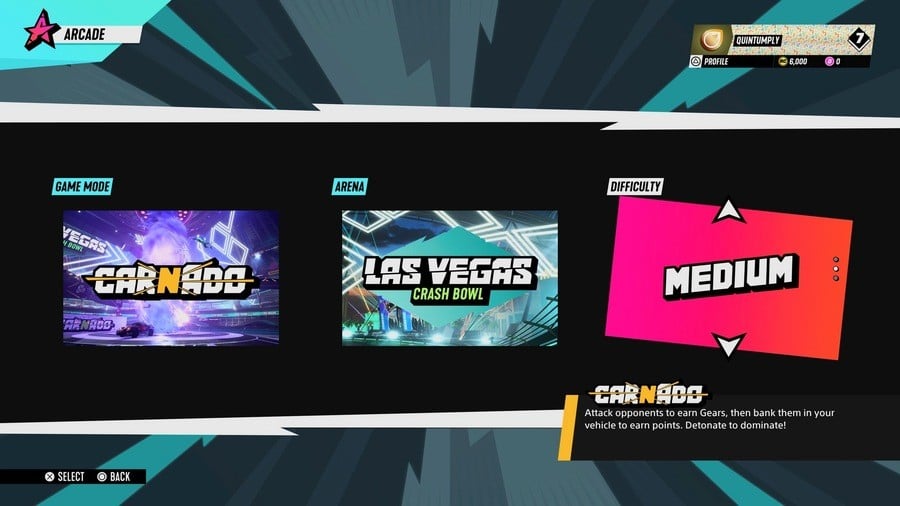 Carnado: This is a team-based mode. You and your teammates need to accumulate Gears by dealing damage and wrecking vehicles. Once you have some Gears, you have to drive into the tornado in the middle of the arena to contribute them to your team’s score. You can accrue up to 30 gears while driving around, but the longer you wait to bank your Gears, the riskier it gets. Wrecking an opponent gets you their Gears. 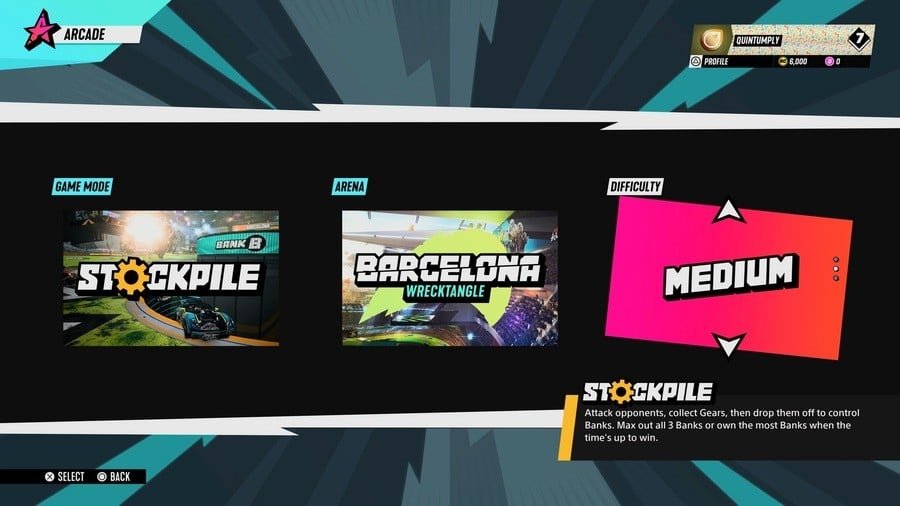 Stockpile: Another team mode. In Stockpile, there are three Banks in the arena. You need to deposit Gears into these Banks to take control of them. The team that can take all three Banks, or the team with the majority of Banks when the timer runs out, is the winner. To get Gears, you have to wreck opponents, who then drop the items on the ground. To pick up the Gears, you have to leave your car and collect them on-foot. 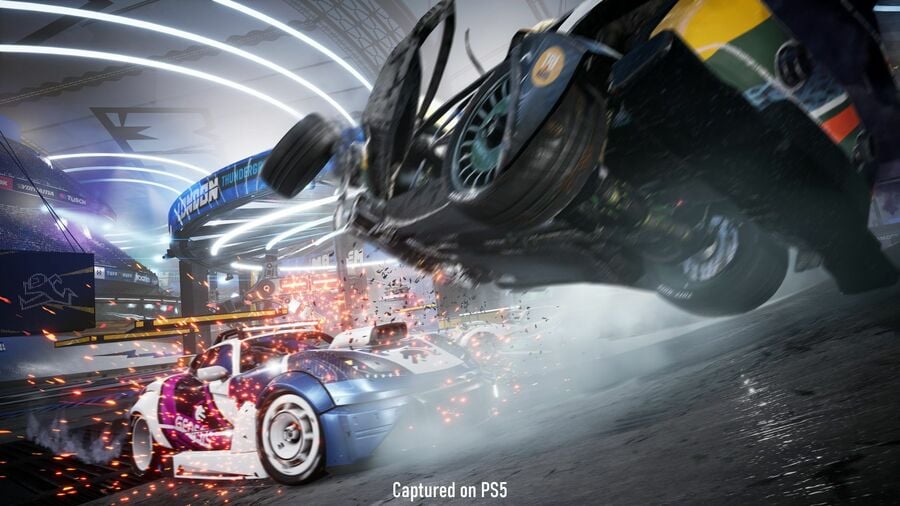 There are three basic car types in Destruction AllStars. One is small and nimble, one is fastest, and one is bulkiest, and packs the biggest punch. Whichever one you’re driving, you have access to a default set of abilities.

You can handbrake turn by holding circle and a direction. You can also pull off drifts by tapping circle and controlling with the left stick. Both are useful for quick manoeuvring. Offensively, you have access to front and side slam attacks on the right stick. You can ram an opponent without these, but using these slam attacks deals more damage, and thus reward more points. The front slam is also useful for a speed boost, while you can use the side slam as a makeshift dodge. Both operate on a cooldown basis, so you can’t spam them forever.

Pressing X will eject you from the car, which you’ll want to do if your vehicle is at low health. This eject launches you much higher than if you press triangle to exit the car, so use it to reach high platforms.

Each character has a unique Hero car. These are kind of like ultimate abilities. Once you can summon one, hop in and you can use its Breaker ability — again, unique for each character. 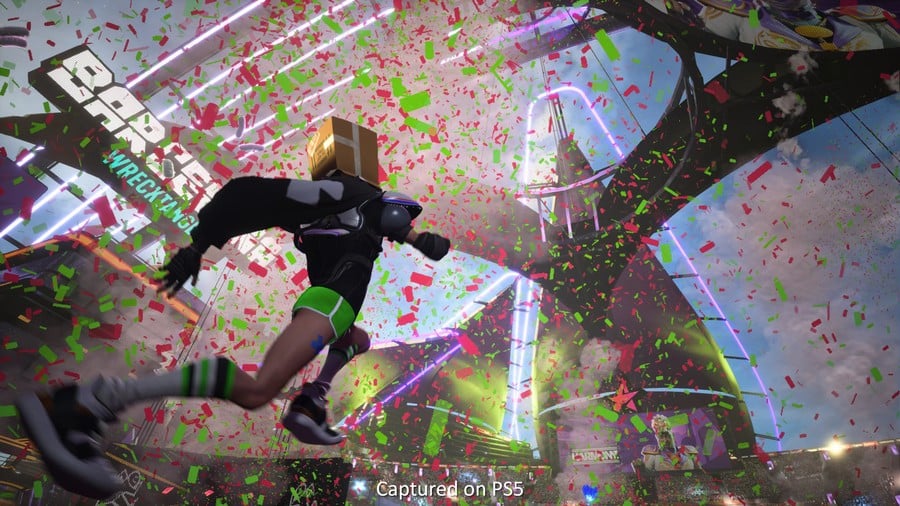 Each character plays identically when out of a car. You might think you’re pretty helpless on-foot, but that’s not the case. One important aspect of playing on-foot is your ability to perform a Takeover on an opponent vehicle. To do this, press circle to dodge an incoming car when you see the prompt above your character’s head, then quickly press triangle. A mini-game will start in which you have to press (by default) either square or circle, sort of like a quick-time event. If you succeed, you can then choose to either get in the car, or destroy it.

While on-foot, keep an eye out for Shards. These pick-ups help build your Breaker meters faster. In addition to Hero vehicles having a Breaker ability, each character has one while on-foot too. As well as unique effects for each character, activating the on-foot Breaker makes you run faster and able to double jump. 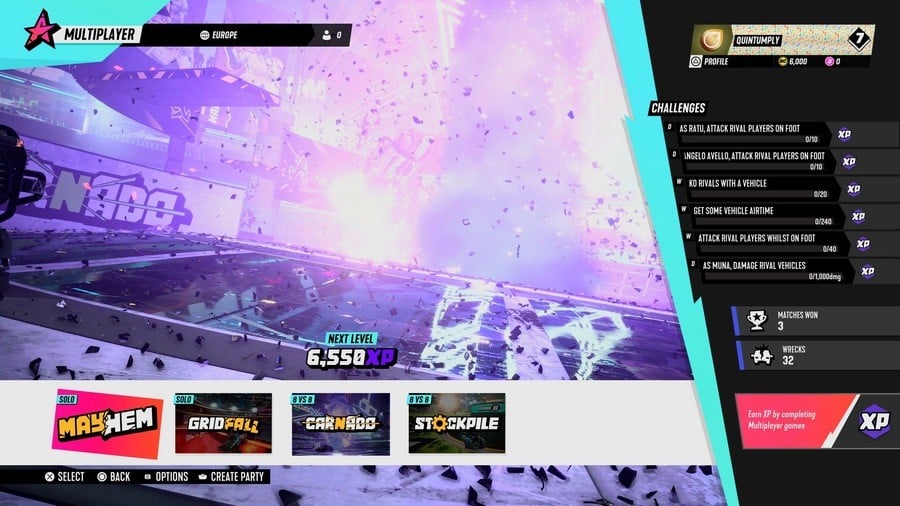 When you play Destruction AllStars in online multiplayer, you’ll notice a set of Challenges on the right-hand side of the screen. Six of them will appear at once — three daily, three weekly, marked with a D or a W respectively. These Challenges will swap out once completed or when they time out, meaning you’ll always have new ones to try. Completing them earns you XP, which in turn levels you up. Levelling up rewards you with AllStar Coins — read more on those below. 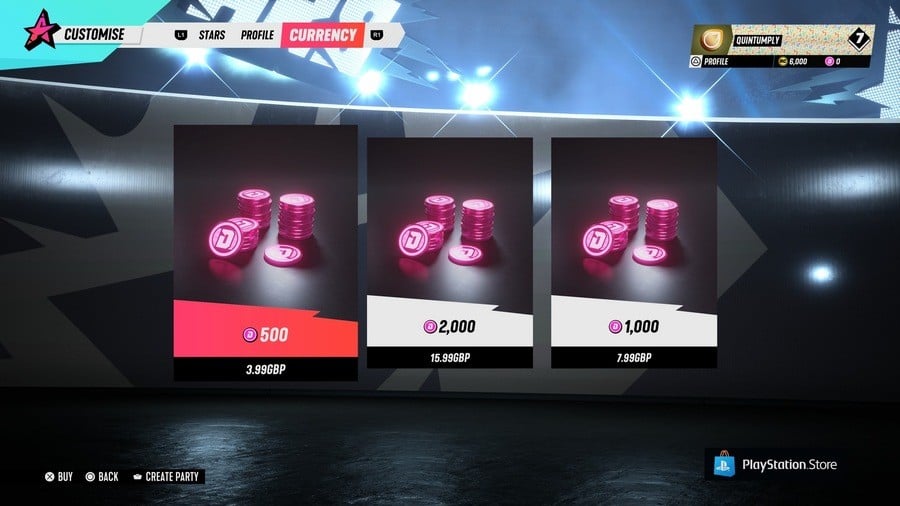 There are two in-game currencies in Destruction AllStars. One is earned by playing online matches, while the other is premium, meaning you need to pay for it via microtransactions. Both currencies are used to acquire cosmetic items for each character, such as colour swaps, emotes, voice lines, and more.

AllStar Coins: This is the in-game currency you will earn just by playing the game. Competing in online matches will earn you XP, and each time you level up, you’ll get some AllStar Points, which can then be spent on in-game cosmetics.

Destruction AllStars: Characters, Trophies, and Other Tips and Tricks

Destruction AllStars has 16 playable characters at launch, each with their own special abilities. If you want to learn more about the roster and which ones are best for which modes, see our guide: [coming soon!]

Below, we’ve laid out a few hints and tips for playing Destruction AllStars. 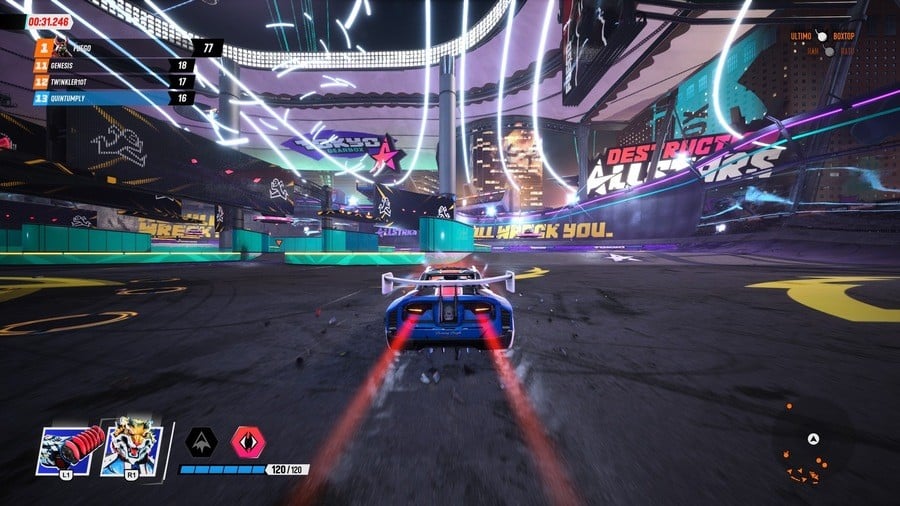 On the right stick, you can engage a slam, either straight ahead or to the left or right. These are the main way you’ll be dealing damage inside a vehicle. However, they have more utility than that.

Pushing up on the right stick engages the forward slam attack, but it’s also an effective way to get a quick speed boost. If you find yourself out of the action, you can use this to get back into the fray. Alternatively, it can make for an effective getaway if you’re being pursued.

Pushing left or right on the right stick will send you flying in that direction. If you’re alongside an opponent, this is a good way to smash into them without needing to turn awkwardly. Additionally, you can use the side slam as a dodge. If someone is speeding towards you, use this move to quickly strafe out of the way.

Don’t Spend Too Long in One Vehicle 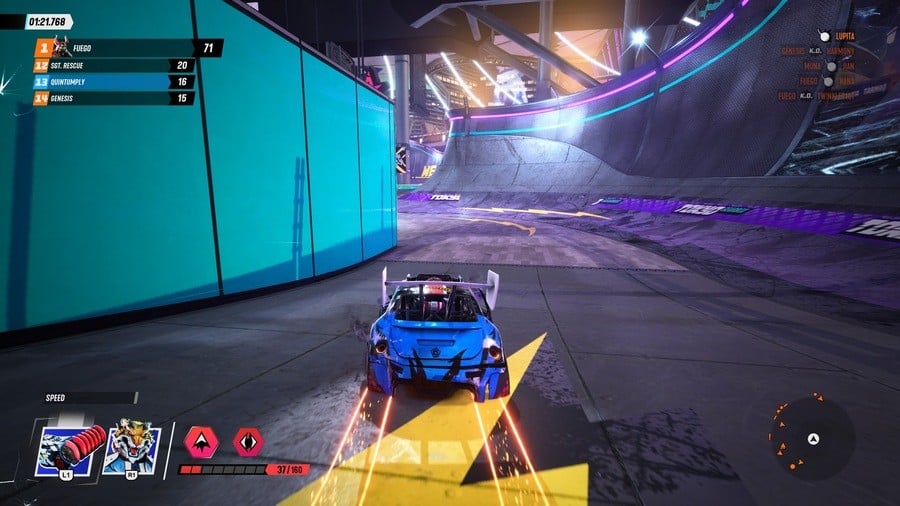 The cars in Destruction AllStars are designed to be disposable, and you should treat them as such. The main way players earn points in this game is by wrecking opponents; destroying a vehicle while a driver is inside. Obviously, getting wrecked is at times unavoidable, but the game does a good job of warning you when your car is in bad shape.

When your car is low on health, its bar will turn red and the R2 trigger (accelerate) will begin to vibrate. At this stage, it’s wise to look for another car and ditch the damaged one. It’s better to hop out of a busted up car and find a new one than to stubbornly stick behind the wheel and be taken out. Why give your opponents the upper hand? Give yourself the best chance at success by making sure your ride is capable of taking some hits.

Don’t Forget to Gather Shards if You Spot Them 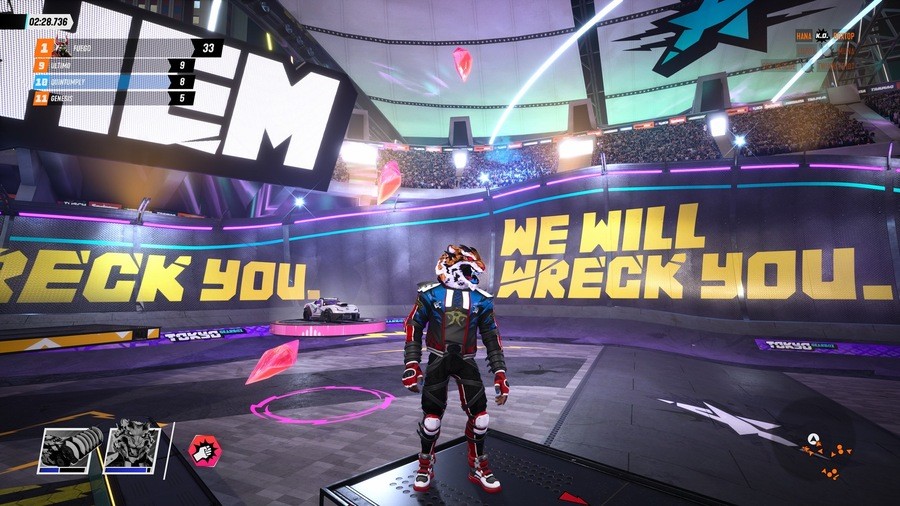 If you’re on-foot and searching for a new vehicle to drive, there are things you can do in the meantime. Something you should look out for are those red Shards, usually found on top of raised platforms and along arena walls. While we don’t think you should go too far out of your way to get these, they are helpful.

Shards help to fill your character’s Breaker meters more quickly, meaning you can activate your most powerful abilities faster. That’s nothing to sniff at, eh? Again, it’s probably more trouble than it’s worth to jump about gathering dozens of Shards, but if you’re on-foot and there are some on the way, it can’t hurt to quickly grab them. 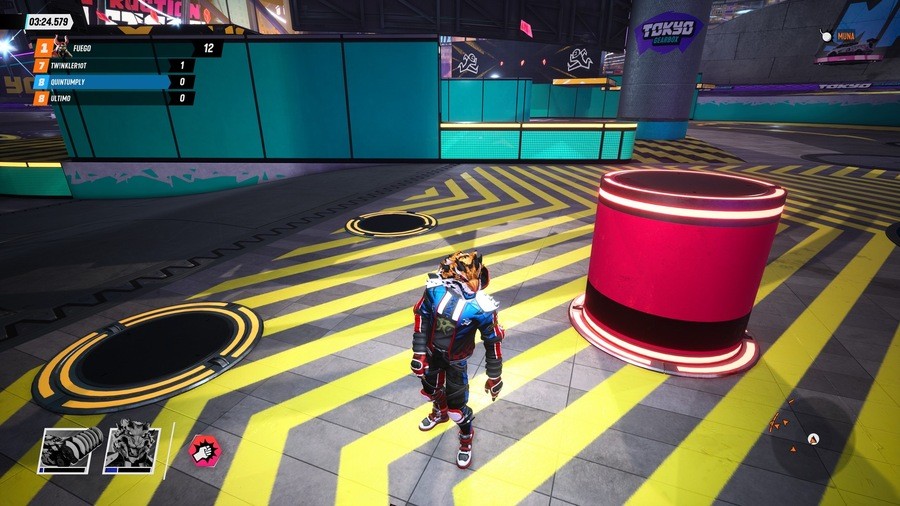 This is a detail that you might overlook when learning the game. Each arena in most modes will have highlighted circles on the floor. If you drive over them, nothing happens, but they do serve a purpose.

If you run over these circles while on foot, they will raise from the ground. The intention of this is to protect yourself from cars looking to knock you down; raise a few of these barriers and you may get a car slamming into it trying to chase you. Run over these and you are likely to catch out one or two careless drivers.

How Do You Mute Other Players in Destruction AllStars? 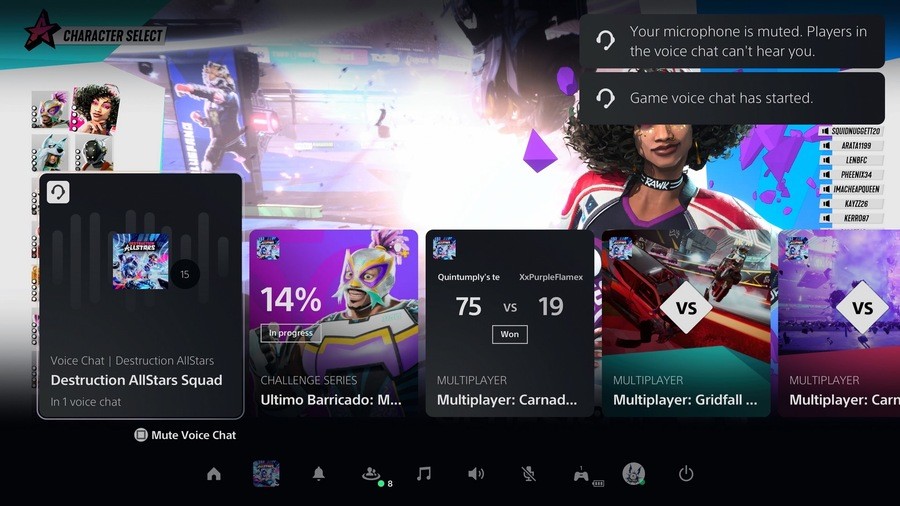 When you join an online match in Destruction AllStars, you’re automatically placed in a party chat with the other players. Of course, not everybody wants to socialise. If you’re not feeling up for a natter with some strangers, or if you don’t want to listen to others having a chinwag, there is an answer.

While in the lobby, press the PS button to bring up the Activity Cards. The first one will be the party chat for the match you’re in, and if you press square, it will mute all chat. You will need to do this each time you join a game, but it only takes a second.

Alternatively, you can join a party chat containing just yourself, and that way, the game won’t automatically drop you into a party with other players.

Someone should make a game about: bookshops • Eurogamer.net

Talking Point: So, What Are The Chances We'll See A 'New' Nintendo Switch In 2021?

Talking Point: So, What Are The Chances We'll See A 'New' Nintendo Switch In 2021?

Fire Emblem Engage has already been rated in South Korea

Fire Emblem Engage has already been rated in South Korea