Final Fantasy VII Remake Integrade isn’t just a new-generation upgrade for the original game – it’s also home to a new DLC chapter known as FF7 Remake Intermission – and that DLC episode features a handful of side quests including a quest that tasks you with fracking down Happy Turtle flyers.

This new chapter stars beloved FF7 cast member Yuffie, who didn’t appear in the first remake release. It tells the story of what happened to her before she joined the party – which she’ll presumably do in the next game. The Happy Turtle Ad Campaign side quest is also a call-back to the original game – referencing a bar in Yuffie’s home country of Wutai and a similar quest in the original game which was known as the Turtle’s Paradise side quest.

Where that mission had you searching for flyers all over FF7’s world, the version presented in Intergrade’s Intermission episode is mercifully a bit simpler, with six flyers hidden around the Sector 7 Slums. On this page, we give you all six Happy Turtle Flyer locations and how to get them.

To get the side quest, you simply need to speak to Old Snapper, an excitable man dressed in a turtle costume found on the southern half of the Sector 7 Slums. The game will actually point you to him with a blue circular ‘discovery’ icon once you’ve been introduced at the AVALANCHE base. At this point, you can continue Yuffie’s main quest or take some time to tackle side quests including Chadley’s Ramuh VR battle, Fort Condor matches, and this, the Happy Turtle Ad Campaign quest.

Chat to Old Snapper to learn all about the quest. Old Snapper is also where you trade your Condor Coins, earned for winning at Fort Condor, for useful items. For now, however, we’re focused on his quest.

Completing the Happy Turtle Ad Campaign quest by finding and returning all six flyers will get you the Magnify Materia, a hugely useful materia that’s one of the best materia in FF7 Remake; it’s this game’s version of the ‘All’ materia. You’ll also get the Turtle-tastic trophy.

You can track down the flyers two ways – by paying attention to Old Snapper’s hints, which can be found in the story menu under discoveries, or by listening out for music – for various versions of the Happy Turtle theme song. Below, we detail all six flyer locations under headers that represent Old Snapper’s in-game clues.

1. Some kids hid one somewhere 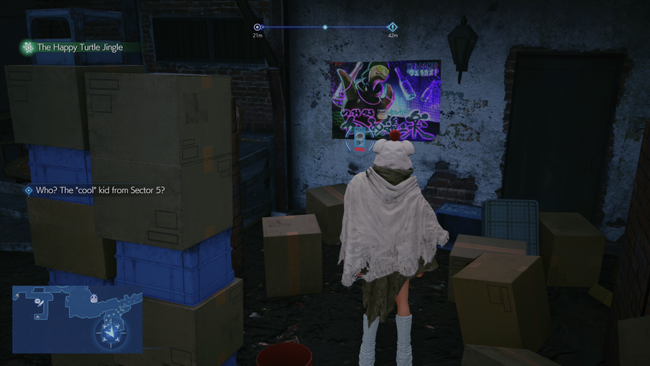 Just to the south of Old Snapoper, the quest giver, there’s a small boxy area where there’s kids playing. Start your quest here.

At the back of this area there’s a bunch of cardboard and plastic boxes all piled up. Smash through these just by walking through them and causing a physics explosion to find the Happy Turtle flyer just chilling behihd the boxes.

2. Floating through the air 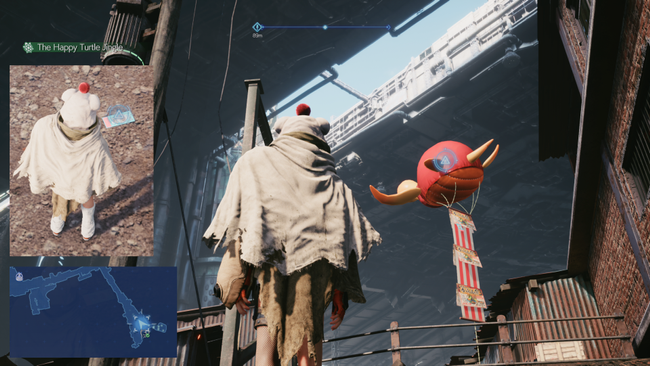 Follow the street directly beneath Old Snapper east from the first flyer’s location – there’s a long street down here that ultimately leads to the area of the map that’s as far south as you can go in the Sector 7 Slums.

There’s a few things here, including a chest that contains a Fort Condor unit, but also there’s a little area off to the east, where you have to clamber over a box to get in there.

Climb over the box to reach that far south-eastern area and look to the sky. There’s a large floating turtle balloon – and there’s a Happy Turtle flyer attached to it. Press Triangle to burst the balloon.

The flyer will flutter down to the ground in the main area you came from, so climb back over the box – you can’t miss it on the floor as you move to leave the area. 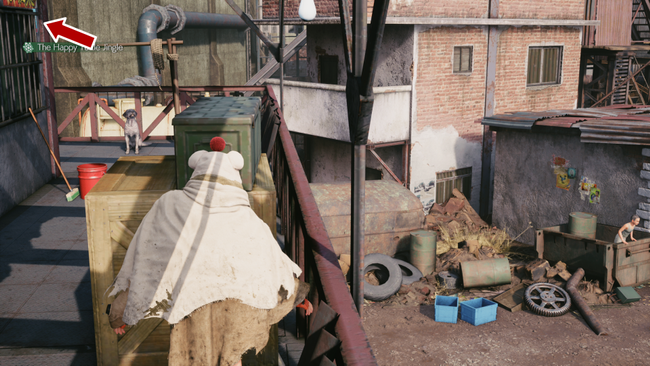 This one is a bit of a pain to find, and to get. The only apartment building in the version of the Sector 7 Slums in FF7R is the one where Cloud also lives in the main story – and that’s on the western side of the map. You can spot it easily because it has nice, sharp edged spaces representing the rooms.

Up here, there’s a dog. The dog will alternate between sleeping, stretching, and being alert. When it’s sleeping, you can move forward. Whenever it isn’t, you need to hide behind one of the crates so it doesn’t see you. If the dog spots you, it’ll bark and you’ll have to start over.

The Happy Turtle Flyer is well-hidden. It is not around the corner – it’s on the wall right before the corner, next to the final door. Sneak up, grab it, and as soon as you do the cutscene that plays will stop the dog from interrupting you.

4. A cat took one on Culvert Street 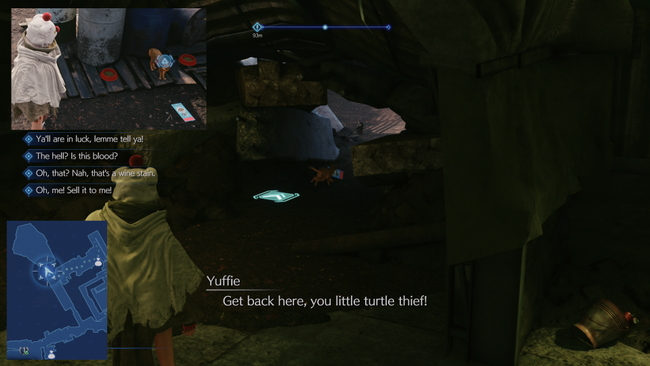 You’ll likely remember Culvert Street from the main FF7 Remake as a location where Cloud got into a couple of scrapes. It’s a more open arena-like area in the north-western area of the slums. There’s a shop nearby. As soon as you approach the area, you’ll see a cat carrying the Happy Turtle flyer run through into the arena.

Don’t worry, there’s no combat here. Since Cloud was here, it seems the area has been taken over by cats – there’s lots of them, and they’re all carrying various paperwork. Your job is to find the cat that has the Happy Turtle flyer.

The cat in question is at the back, hiding behind some barrels. Grab the flyer and you’re done here.

5. On the town bulletin board 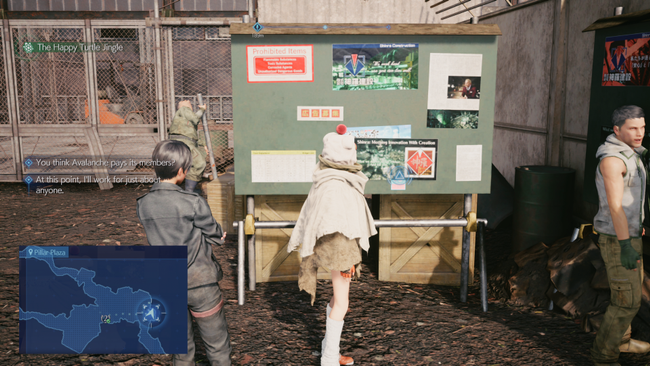 This one is nice and simple, and again sees Intergrade’s Intermission chapter revisit an area that you used in the original FF7 Remake. Take Yuffie to the far eastern area of the Sector 7 Slums, in the area called ‘Pillar Plaza’ on your map. This is right before the train station.

In Pillar Plaza, there’s a community notice board used for various notices. On it there’s a big poster about Shinra ‘Merging Innovcation with Creation’ – it’s the town bulletin board item with a big picture of Midgar and the Shinra logo. The Happy Turtle Flyer is poking out from underneath it; grab it.

6. Near the old Talagger Factory 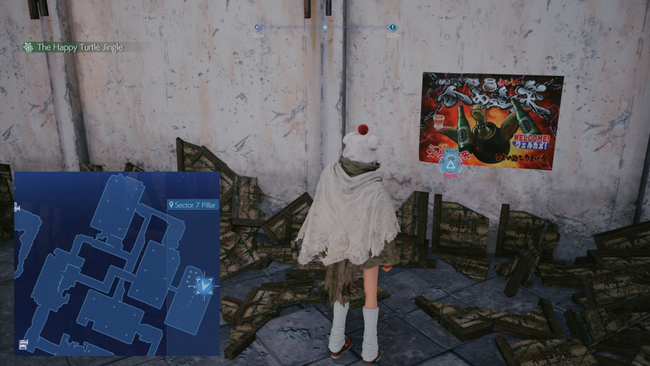 This description is a little misleading as this Happy Turtle Flyer isn’t so much near the Old Tallagar Factory as inside it. Thankfully, as you approach the area, Wymer – who you should remember from the main FF7 Remake story – will warn you not to go into the factory, because there’s monsters. Hint hint.

If you played the original FF7R you know what to expect here, as several quests saw Cloud and Tifa trapse through this disused factory. Be combat ready and head inside. There’s only basic enemies here, but be careful not to get overwhelmed.

You can follow the sound of the metal music, but ultimately the flyer is found in the far eastern area of the factory, through a door and a grate you can climb through. You’ll have to defeat two more challenging enemies, then you can smash some boxes on the top half of the room to find the flyer behind.

Keep in mind that if box rubble is in the way, the prompt to pick up the flyer won’t appear – if that happens, just walk into the pieces of box to scatter them.

Revived MMORPG Aion Classic launches on June 23 in the Americas