Note that you can perform the save data transfer entirely from a PlayStation 5, including if you’ve already downloaded the PlayStation 4 version of the game to the console.

The update will add a simple Upload Save Data to the main menu screen. Simply select this and you’ll be greeted with the familiar save menu layout. 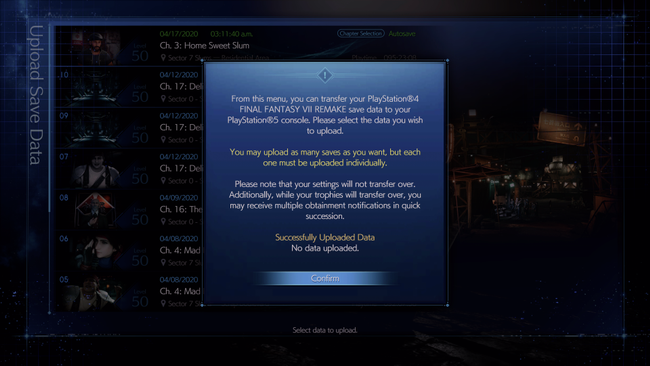 Once here, simply select which file you’d like to upload. It appears only one file is uploaded at a time in this manner underneath Successfully Uploaded Data, but the tooltip mentions that the process can be repeated as many times as desired. Trophies will also carry over to the new version. Handy stuff in case you want to immediately go into end-game battle simulator trials in the new version of the game.

In case you missed it, we were able to go over some preview footage of the new PlayStation 5 exclusive Yuffie-centric Episode Intermission last week.

Also, we checked, but 1.02 does not alter the door to Cloud’s apartment.