As a middle schooler in the year 2001, I didn’t quite know what exactly Final Fantasy was. I had a vague idea of what Vivi looked like and I knew I’d seen the name ‘Sephiroth’ pop up in AIM chatrooms all over the place, but I hadn’t experienced anything firsthand from the series. I might have gone another decade or more to discover exactly what I was missing out on if it wasn’t for an auspicious demo disk inserted into a copy of Official Playstation Magazine — something I had subscribed to on a whim out of a school fundraiser, of all things.

On that disk was a playable demo of Final Fantasy X. Without any hyperbole, I think my life was changed from that moment on. I was perhaps a bit too easy to please as a wide-eyed pre-teen, but who isn’t at that age. I thought Auron was really cool, of course. The summoning animations were so beautiful that I couldn’t possibly consider ever skipping through them. I permanently affixed Final Fantasy X’s rendition of Ifrit into my brain so thoroughly that the series’ more demon-like interpretations of the summon still feel like imposters in my mind. I would listen to Run!! by just setting the controller down and letting it play out over and over. Needless to say, I was a bit obsessed.

I’m honest enough with myself to accept that I’ll never be able to truly look at Final Fantasy X objectively, not completely. Divorcing myself from such a formative experience, one that put me on the path of loving Final Fantasy and RPGs in general, is not something I’m sure I’d want to attempt if I even could. However, I did play through FFX again last year just to see if the adult version of myself would still find the game as compelling, and at least make an attempt to not just be blinded by the nostalgia from a couple of summers in middle school. If anything, I found that it might just resonate even more now than it did back then. 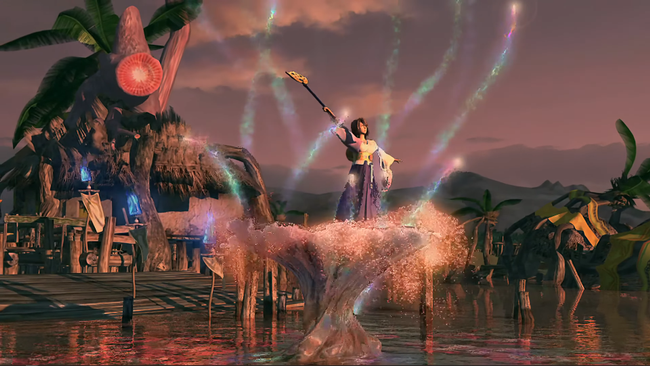 Of course, even as a kid I could pick up on some of the surface-level themes. Death and mourning permeate throughout the entire game, and it doesn’t take much illumination to see that. But as a child, I couldn’t really relate because I wasn’t equipped to. My grandparents were all still alive at the time. Cancer was a foreign boogeyman I saw on the news once or twice. War was a movie thing and I hadn’t had to ever really say any lasting goodbyes to anyone.

A couple decades and a handful of funerals later, Final Fantasy X tells a different story to me now. It’s more poignant than it was back then. I probably cried more at the ending. I projected my own experiences onto the game in a way I simply couldn’t when I was eleven years old. 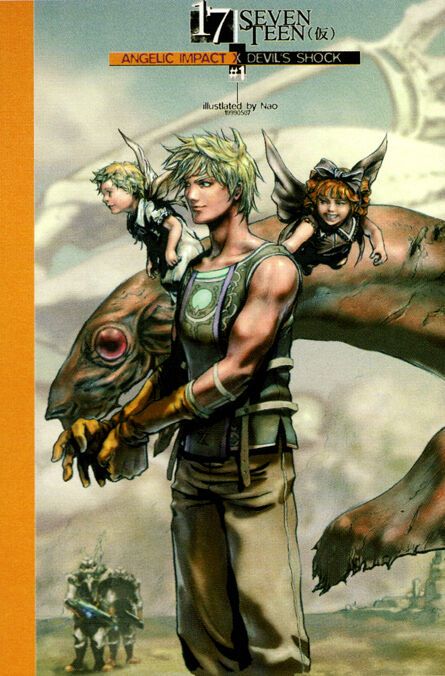 Final Fantasy X was originally conceived as Seven Teen, where an epidemic killed people when they reached 17 years old

It’s common enough knowledge now that Final Fantasy X originally began as a completely different project altogether. It began life as a Seven Teen, where people would succumb to a mysterious affliction upon turning 17 years old, and the game would recount one teenager’s quest to find a cure. While this concept was ultimately dropped upon being adapted into what eventually became Final Fantasy X, the echoes still linger in both Tidus’s fate, Yuna’s sacrificial journey, and frankly throughout so many core aspects of what so many of us experienced in 2001.

More than just about experiencing loss, Final Fantasy X is an exploration on how people grieve following loss. Tidus turns (even more) resentful towards his father, blaming Jecht for the loss of his mother. Yuna channels the grief of losing her father into a renewed sense of purpose, determined to ease the pain of others before considering herself. She refuses to see Braska’s death as meaningless and applies that thinking to her own fate, only beginning to questioning it upon meeting Tidus. 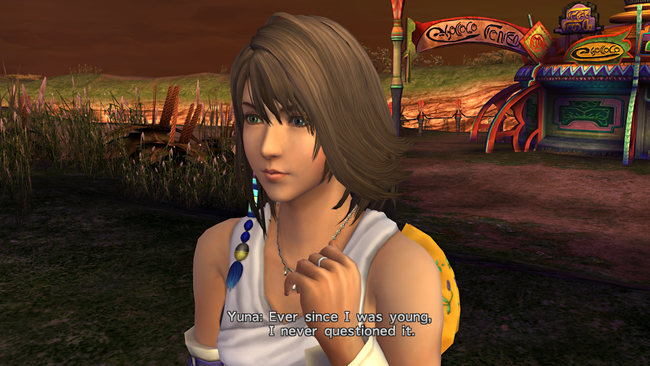 A common theme of Final Fantasy X is being too young to fully cope with losing a loved one. Even Auron reflects on his naivety in going along with Braska’s original pilgrimage. “Legendary Guardian? I was just a boy.” Auron is in many ways the most tragic on the entire cast, having lost both his mentor and friend in a pilgrimage he later learned would only bring fleeting respite to Spira, and losing his own life when he couldn’t accept their fates. The fact that he turns his grief towards shepherding Yuna to a different outcome without ever explicitly directing her is a feat of resolve that compells me far more than whatever I thought was cool about him so long ago.

“Forgive me, I was too young.” A key part of Lulu’s backstory is also a pivotal moment in showcasing just how Spira values a summoner’s life with respect to the pilgrimage they undertake for the happiness of others. Lulu never truly forgave herself for failing to protect Lady Ginnem, a summoner who perished in her pilgrimage before ever defeating Sin. It was partially this experience that had Lulu push back against having Yuna undertaking the same journey that Braska did. Lulu would have to accept that she would lose another person close to her, even if the pilgrimage succeeded. In this way, we see another facet about how the notion of inevitable death carries forward from the vestiges of Final Fantasy X’s initial conception. 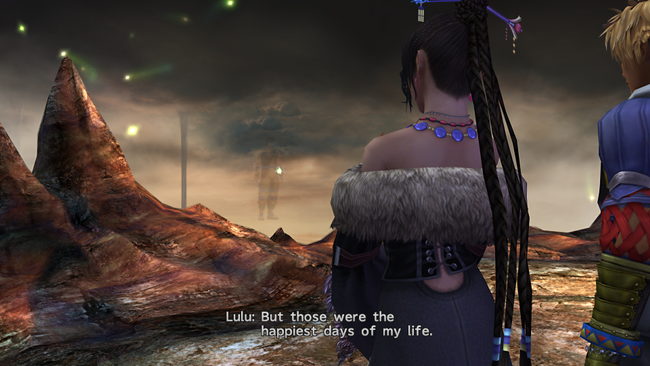 While several other party members experience their own personal tragedies, one moment in Final Fantasy X that stood out to me upon my revisit were the stories of the minor characters of Luzzu and Gatta. Both are crusaders that are determined to stop Sin at Operation Mi’ihen, and both are met early on in Besaid, but only one is able to survive based on a couple of dialogue choices that the player can make. Whether it’s the young knight Gatta losing his mentor or the veteran knight Luzzu failing to protect his charge, the two outcomes are treated as equally tragic. Regardless of the outcome, Luzzu or Gatta has to learn to move on from the decisions they’ve made, and carry the memory of their fallen companion forward rather than stay mired in regret. 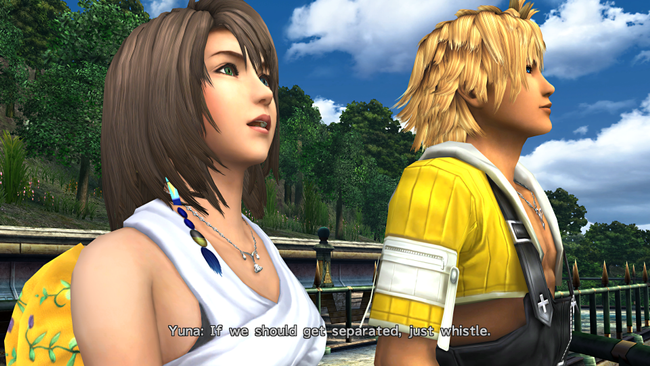 This is a throughline that permeates most of the character arcs in Final Fantasy X. Wakka learns how placing blind face in the teachings of Yevon as an explanation for his brother’s death was misguided, and Lulu learns to respect both Wakka or Tidus instead of shunning them for not being a replacement for Chappu. Even Rikku and the Al Bhed, though sorrowful at the loss of their Home, understand that their memories remain and that a new Home can be rebuilt. This is in stark contrast to Yu Yevon, whose instinctual devotion to keeping up the summoning of Zanarkand – as he remembers it – is treated like a parasitic obsession at the climax of the game. If Yu Yevon represents anything, he represents the sort of frailty that comes with being wholly mired in grief. What was once likely an earnest loyalty to Zanarkand had been warped into an unnatural compulsion.

“I will live with my sorrow, I will live my own life! I will defeat sorrow, in his place.” Both Yuna and Yunalesca come to a similar conclusion about the nature of grief and sorrow — that it cannot be truly eradicated, that eliminating it entirely is an impossible task. However, Yunalesca sees sorrow as a vessel for endless despair, a destructive force that must be masked in order to give people a semblance of hope. Yuna instead declares that she’ll defeat sorrow in the same breath in which she says she will live on with it. Because the strength to cope with grief and move on from loss isn’t found in vanquishing it, but rather by refusing to give into it despite its inevitability. 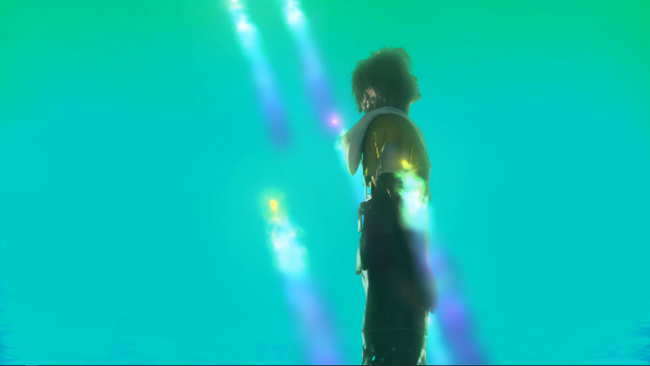 My mind lingered on Tidus’s final words to the Fayth responsible for his continued existence and inevitable disappearance for a long while. It carried more meaning now than it ever did when I was a child. I’ve said goodbye to many friends and family members over the last 20 years, and it’s of course inevitable that I’ll have to say goodbye to so many more. Oftentimes it’s a privilege to even get the chance to say goodbye at all. Rather than trying to assign meaning on when and why people enter and exit my life, I find it is much more comforting to allow myself to be thankful, grateful for the memories I can keep with me — and never forgetting them.

Soul Sacrifice was the best new Sony IP of the last generation, and it deserved better

Soul Sacrifice was the best new Sony IP of the last generation, and it deserved better