Mecha RPG fans, we gotta talk. Relayer looks promising and the newly announced Super Robot Wars 30 is shaping up to be another great entry. Daemon X Machina scratched an itch for a hot minute a few years back. SD Gundam G Generation Cross Rays was also a decent time sink too. Giant robot lovers get occasionally fed, but as you see with most of the notable titles mentioned, the plate we’re usually served is the Strategy RPG Special. I’m personally alright with that, though I can see the need to spice it up.

Developer OTA IMON Studios and publisher Raw Fury might have something up their sleeves with Wolfstride.

I got early access with the brief demo that’s now available on Steam here for Steam Next Fest and I think this is one to keep an eye on.

The heart of Wolfstride is in its 1-versus-1 turn-based brawls between two giant robots. There’s a bit of G Gundam energy and Front Mission DNA sprinkled throughout it, but what really stands out at first glance is Wolfstride’s visuals. Its grayscale approach to the entire game and fluid approach to motion lines evoke a Japanese manga aesthetic; this striking look especially shines during its intense combat sequences. Every time one of these two humongous lumps of steel strike at one another, Wolfstride briefly transitions into a Japanese onomatopoeia to add a tiny bit of slick flare amidst the chaos.

Combatants face off head-to-head at opposite sides of a battle arena. Their positions in the arena are dictated by seven squares spread across the bottom of the screen. Players, and their foes, spend MP (Move, not magic, Points) to traverse across these tiles. Moving between each of them consumes 1 MP, but if their opponent is occupying a space right in front of them, players can spend 2 MP to take over that tile and push foes back. 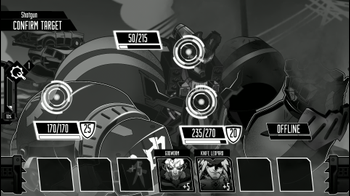 You can really tell if someone is getting messed up.Territory control in this manner is crucial in Wolfstride, because if any side gets pushed all the way back into their starting position, they’re placed in a Deadlock situation. Deadlocks grant the incoming attacker a huge damage bonus to all of their attacks until the defender can leave that space.

Players take on the role of Knife Leopard, the pilot of the Cowboy, in battle. The mechs duking it out each have separate lifebars and armor values across four different parts – the head, the left arm, the right arm, and their chest. To emerge victorious, the chest is the key part to take out, but life isn’t so simple in Wolfstride.

Each arm can, of course, go on the offense with the weapons or abilities they’ve been equipped with. In the first fight in Wolfstride’s demo, the Cowboy faces off against Wormageddon whose most dangerous attack lies within its right arm – the God Punch. As its name would imply, the God Punch is rightfully devastating in its damage output, but it does take a turn to charge up. Luckily one of Cowboy’s starting abilities, the Cactus Guard, not only applies 15 Armor to its right arm, but it also taunts incoming attacks on the next turn, so it can properly withstand the incoming God Punch.

This is a hint of the brilliance behind Wolfstride. There are a lot of constant decision-making moments in the heat of battle. Should you prioritize disabling the opponent’s dangerous offensive options and drag the battle out, or take a more direct approach sacrificing the Cowboy’s safety to take the enemy mecha’s chest out as soon as possible? All your weapons and abilities consume AP (Action Points) with their own set of cooldowns; ranged weapons also consume ammo that you will have to spend AP on when it’s time to reload. Some attacks hit farther than others, so should you take some shots first and then close the distance, or would you rather push them as far back as you can immediately? 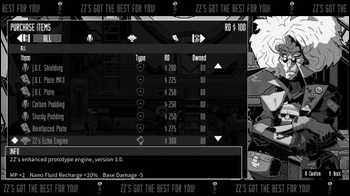 Managing funds seems to be a tricky balance between repairing the Cowboy, purchasing parts, or investing in new equipment.It may sound a lot to take in, but learning the ropes didn’t seem too hard once I wrapped my head around the flow of combat. On top of all that, both giant robots have a meter on the side that gradually fills up as they dish out and take damage. Once this meter is full, a separate menu of self-reparation options are at your disposal, including resurrecting a part that may have been destroyed.

These 1-versus-1 battles are the core of Wolfstride, but players will also have to take care of Cowboy outside of combat too. Out on foot, players take on the role of Dominique Shade; he’s the manager that oversees the crew that works on the Cowboy. Every bit of damage the Cowboy takes after combat has to be repaired with cold hard cash. The only source of income is from winning battles in the brief demo, but there seems to be other avenues to earn some dough in the full release. Players will also have to balance damage funds with new parts and equipment for Cowboy. Some parts may increase maximum AP or MP values and often have trade-offs when it comes to how much HP they have versus Armor value.

The contrast in visuals is quite amusing when walking around with Dominique. It’s presented as a cute, little pixel art game while the Cowboy stands in the back for maintenance lifelessly standing by with its lovingly detailed model.

I walked away from the Wolfstride demo enjoying the main concept of what the developers are going for. The second battle is much tougher with some nasty surprises for players to discover and adapt to. Mecha anime fans should be on the look-out for cheeky references here and there; the Wolfstride demo has its fair share. I’m looking forward to Wolfstride’s full release; unfortunately, there is no release date yet but hey, you have my attention 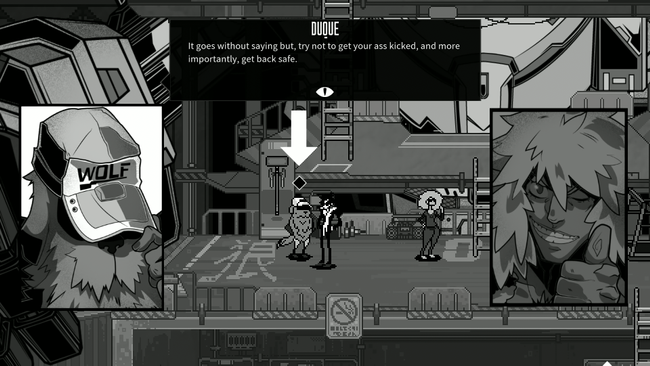 The new Guardians of the Galaxy game has some curious, BioWare-like light RPG elements