The long-awaited version 2.0 patch of Genshin Impact is now live. This brings us to the region of Inazuma. Along with many new features, the region of Inazuma features many new things and for players that have been playing a long time, you will need to farm items in the new region to make the best use of new characters.

It’s the biggest new update to Genshin Impact yet – and to help you to make your way through it, we’ve put together this Inazuma update primer guide, listing the various changes and additions to the game. You can hit the various links throughout this article, which will be regularly updated over the coming days and weeks, to reach individual guides about many of the update additions.

In order to travel to Inazuma, you must first reach AR 30 (Adventurer Rank). When the conditions are met, you can talk to the adventurer guild in Liyue to trigger an event scene. You will need to hop on the ship southeast of Guyun Stone Forest. 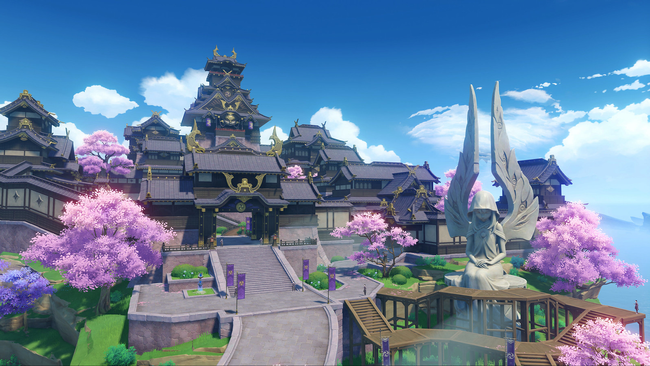 The first selling point of the new region is that we can roll plenty of new characters that are from the region of Inazuma. The first character to appear in this new version is Kamisato Ayaka, the eldest daughter of Kamisato clan. There are other new characters as well, but only Ayaka is featured in the current banner with other characters to be released later.

Ayaka is a cryo-sword user with a water-type dash similar to the one used by Mona – and if you grab her you’ll need to farm the new Sakura Bloom item in order to level her up to the max. If you’re unsure about the new characters, be sure to test them using the Trial Mode to get an idea of how that character plays like.

For players that aren’t interested in acquiring a new character and want to get a 5-star weapon, there are plenty of new weapons that have been implemented in the game. The main one being the Mistsplitter Reforged.

This sword is highly effective for characters that use their elemental skills frequently, however since this can only be acquired through the weapon banner, it is extremely expensive trying to acquire this weapon as there are two other weapons that can dwindle your chance of acquiring the featured weapon. There is a new pity system implemented for version 2.0 by selecting the desired weapon and failing to acquire the desired weapon more than twice.

There are also new craftable weapons in the region of Inazuma, such as the Amenoma Kageuchi. The new craftables will require completing side quest in order to acquire the recipe diagram to forge the weapons. Like previous craftable weapons, this will also require finding the Prototype weapons as a material.

Statue of the Seven – Electro 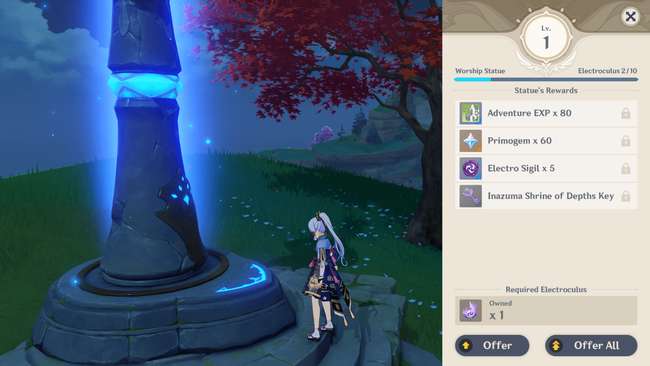 Arriving in the region of Inazuma will let the Traveler attune to the electro element. Unlike the previous regions, exploring Inazuma and collecting the Electroculus will not increase the stamina cap. The reward here offers shrines keys that let you collect premium treasures and fighting certain enemies that aren’t found commonly in the wild.

Having an electro element traveling Inazuma will come in really handy, as a lot of material and puzzles will benefit from having an Electro user in the party. The protagonist when attuned to the element of electro is also much more potent than the previous elements and actually fairly strong character in its own right.

The Traveler will also need to farm new sets of mats to bring out its full potential, with that in mind, the current protagonist might not be the strongest damage dealer, but a stronger support unit that provides a really strong buff to Elemental Reactions. This is also a good alternative if you don’t have some of the strong support characters in the game.

Electrogranum is a feature found only in the region of Inazuma. Using this is required to gain access to some of the areas and solving certain puzzles to acquire treasures placed in the field. To use the  Electrogranum, you will need to attune to the first statue of the seven for an event.

Then after this, you can examine branches with an electro orb to summon an Electrogranum. While using the Electrogranum, it will let you go through electric barriers and allow you to magnetically pull your characters towards electro flowers in the map. 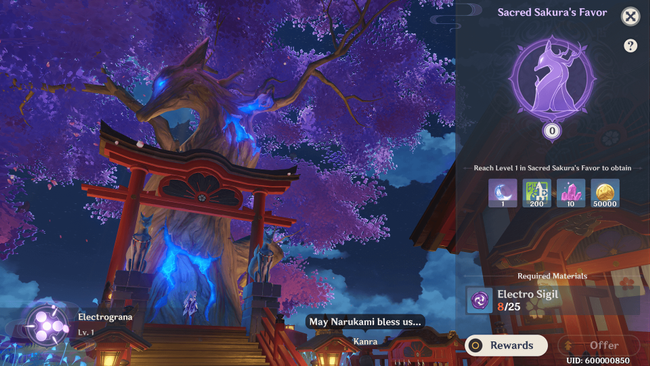 If you have been spending time trying to farm materials for the new characters or the new weapons, You will be out of luck, as the new material requires new materials found exclusively in the region of Inazuma.  With only Kamisato Ayaka being released as of now, players that are lucky to have her in the roster will need to gather all sorts of new material if they want to ascend her abilities on the battlefield.

The material that is required to ascend Ayaka is found commonly when fighting the Samurai-type enemies known as Nobushi. If you have trouble finding them, use the field logs to the upper to locate them.  The next material is the Pepetrual Mechanic Heart, which is the new world boss found to the north of Inazuma, this boss will require an event to unlock starting on July 21st.  The other material is the Sakura Bloom. If you see a pink mist in the field, use an electro attack to create a Sakura Bloom on the field. 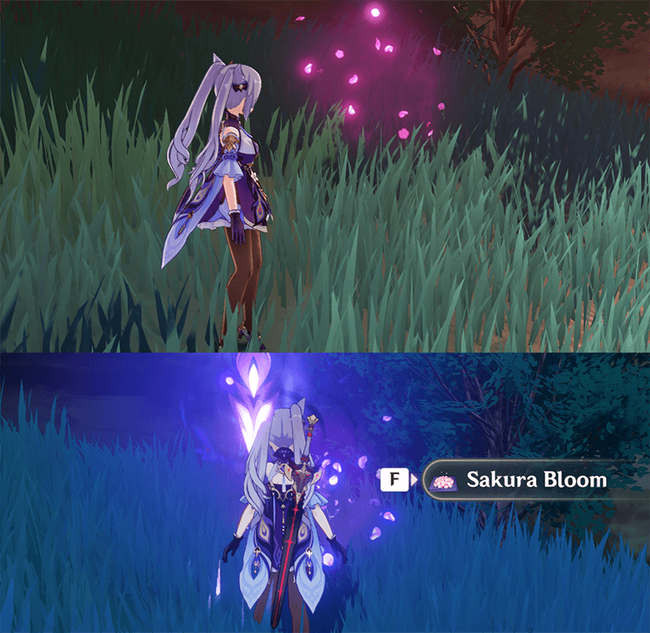 After ascending Ayaka, and being given access to upgrade her Talent skill level. You will need the new domain, Violet Court. The domain is located to the west of Inazuma City. The material for Ayaka appears only on Tuesday, Friday, and Sunday.

Mystic Offering: A new feature that lets you exchange artifacts for a Strongbox. The artifacts are random, but the feature is useful for players that have an excessive amount of artifacts and want to exchange for a particular set.  Adjust Commission Location: You can now adjust the region of your daily commission location. This feature is also extremely helpful for players that want to complete certain quests for a certain region for achievement purposes or filling their adventure logs. Teapot Improvements: For players that have been using the Teapot, you can now acquire waypoints to get quick travel within the Teapot.  There are also new recipes that require wood found only in Inazuma.