Genshin Impact has always devoted a lot of time to letting players huint down key items you’ll need during your adventure – and one important new piece of plantlife that’s native to the new Inazuma region added in the game’s 2.0 update is Naku Weed.

Much as with Sakura Bloom, Naku Weed is a new material that’s important for character ascension – specifically for Yoimiya right now. Given that Yoimiya is one of the most important additions to the game in this update and set to be the star of a major character banner come August. That means you’ll want to farm some Naku Weed to be ready – and it’s likely to become an important material for more charaters in the future.

.On this page, we’ll detail where to find Naku Weed in the wild in the most simple way we know how – with a handy Naku Weed location map that you can use to work out the best farming locations.

There’s 10 locations where you can find Naku Weed on Narukami Island, 25 on Kannazuka Island, and 9 over on the Westernmost Yashiori Island. That’s 44 in total, and that means it’s spread right across the three core land-masses that make up the areas added in the Genshin Impact 2.0 Inazuma update – now you just have to find them!

Thankfully, these maps will help. They’re lifted directly from Mihoyo’s official Genshin Impact Tevyat map – but if you don’t want the interactive functions and simply want a nice, clear map with which to examine your options while playing, these images will do the trick.

You’re looking for a nice purple/pinkish flower; they can often be easier to spot at night. You don’t have to do anything special to reveal them; it’s a normal plant, so just spot ’em and farm ’em.

First up, here’s a Naku Weed location map for Narukami Island. As you can see, they mostly grow around the Grand Narukami Shrine: Sacred Sakura, just to the east of the Kamisato Estate.

This also happens to be the area where a lot of the Sakura Bloom that you’ll need for growing Ayaka can be found – so if you’re aiming to grow both of these new characters, this might be a good area to repeatedly farm, as you can kill two birds with one stone. 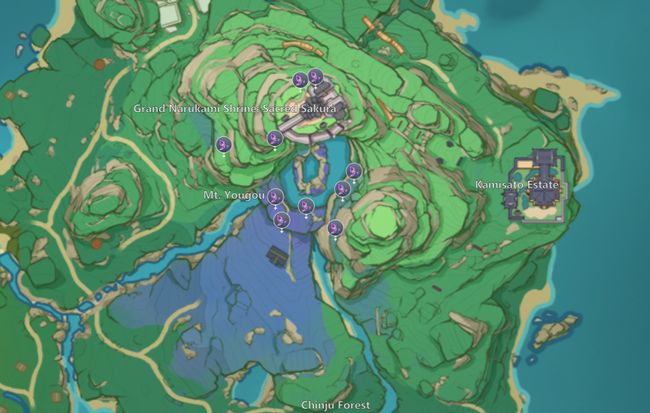 Next up is Kannazuka Island. This is the middle island of the three, and features the larest number of Naku Weed spawn points – twenty-five in total.

Twenty-two of these are around Tatarasuna, and can be famed in quick succession with relative ease, as they’re all quite close together. The final three are to the north, heading up in the direction of Narukami Island. 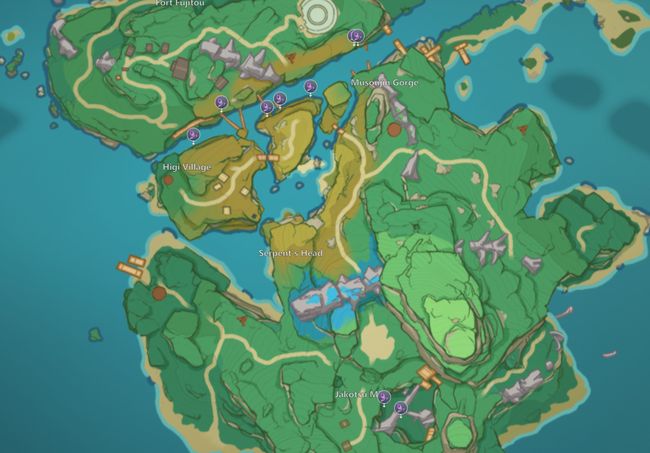 Finally there’s the Western-most island of the newly-added Inazuma territories – and these are probably the least helpful. They’re scattered either side of the gorge that intersects the area for the most part – though two more spawn points can be found at the southern tip of this island, neat the Jakotsu Mine.

Honestly, the spawns for Naku Weed are simple enough that you should be able to figure out a pretty reliable route for farming this key item just from the maps above. We recommend Kannazuka Island in particular – the density of the Naku Weed there makes picking up a whole lot of it particularly easy.

Remember, items like this spawn on a timer – once you pick them up, you won’t be able to grab any more until some time has passed. That amount of time is two real-world days – with the passage of a day being defined by a certain time on the clock based on your local server time. You can find out when your server’s daily reset is on out Genshin Impact daily reset times page.

In addition to all of this, you can begin to actually, literally farm Naku Weed once you unlock the Seed Dispenser and gardening mini-games. To do this, reach Reputation Level 3 and complete the ‘Art of Horticulture’ quest.

You can use the Seed Dispenser in a special gardening plot in your Serenitea Pot. Here you can plant and try to cultivate Naku Weed – it’ll do well and have a strong yield in the Luxuriant Glebe zone.

Cris Tales - All Sidequests, Choices, and How to get the Best Endings in St Clarity, Neva Tulira, and Cinder