The latest content update for Genshin Impact brings with it a great variety of new things to experience and explore – and included amidst all the other content is Shakkei Pavilion, a new hidden Domain with some solid rewards – if you can figure out how to get to it.

Reaching the new secret Shakkei Pavilion Domain in Genshin Impact isn’t something you’ll be able to do right away – but work your way through the new Inazuma world expansion core world quest and you’ll then be able to undertake the Tatara Tales quest – which in turn leads to the Shakkei Pavilion unlock puzzle.

On this page we explain how to start and complete Tatara Tales, and then how to unlock Shakkei Pavilion with your newly-accessible cannons.

In order to unlock Shakkei Pavilion, you’ll first need to undertake a specific quest – the Tatara Tales quest. You can get this one started by heading to the Kujou Encampment area, which is on the smaller islands on the northern edges of Kannazuka Island. It should be clearly marked on your map.

At the encampment, you’ll find a couple of NPCs in a heated argument. Listen in on their conversation to kick off this quest. Tatara Tales asks you to destroy three crystal formations by using an enormous cannon to blow them to kingdom come. This is the Kamujima Cannon, and this is a key tool we’ll need in order to unlock the Shakkei Pavilion domain – thus needing to do this quest first.

The above map will give you an idea of the locations of the three Kamujima Cannons that you’ll need to use in order to complete the Tatara Tales quest. They’re scattered along the eastern part of Kannazuka Island, east of Tatarasuna. The red star, by the way, is your target next time – ignore that for now.

Using the cannons is simple enough – just get the nearby Electrogranum and use it to activate each of the cannons. The cannons are clunky and only shoot in a defined arc that’s at least a little representative of real cannon physics. That makes it a bit of a puzzle – you have to figure out the correct placement and arc to hit your target. In the case of the Tatara Tales quest, your target is the previously-mentioned crystal formations, which will always be in direct sight of the cannon and be quite obvious.

The good news is that each cannon shot you fire doesn’t cost anything – and once you’ve powered up the cannon with the Electrogranum, you can continue to use as many shots as you like until you hit your target. This is particularly useful.

Work your way around the three cannons, blow away your targets, and complete the quest. Once you’ve done that, it’s time to unlock the Shakkei Pavilion domain…

Once you’ve completed the previous quest as described above, it’s time to head back to one of the cannons. The one you’re after is the southernmost cannon, which also happens to handily be right near a Teleport Waypoint. This is the cannon we’re going to use to unlock the entrance to Shakkei Pavilion, a newly-added hidden domain in this new Genshin Impact update. 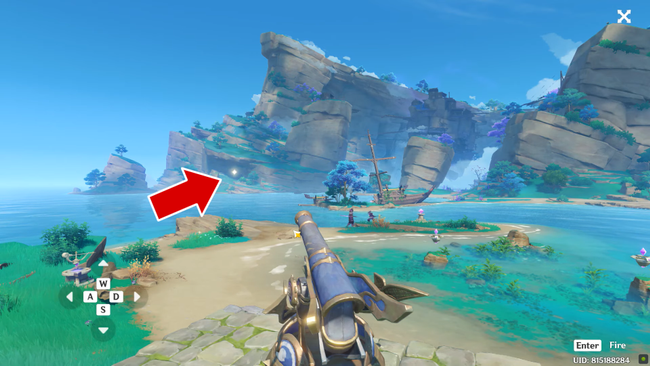 Use the screenshot above, which is from YouTuber ZaFrostPet’s excellent visual guide, to find your target. You’re looking for an area across the water with a little overhang – you’re aiming to shoot almost directly into the shadowed area cast by the overhang. Remember, you can get more length on shots by playing with the arc of the cannon – though you should’ve had plenty of practice with this on the Tatara Tales quest.

You’ll know when you’ve got it right as there’s a little glistening sparkle that appears, as well as the fact there’s now a visible opening. Head on over to the gap you’ve opened up in the cliffside and you’ll find Shakkei Pavilion hiding inside, waiting for you.

All of this seems like a lot of effort for a Domain you can only do once, but it’s worthwhile for decent rewards including the Mask of Memories, an item that teaches a new forge recipe.

While you’re on Kannazuka Island, you might want to consider gathering some key resources added in the new Genshin Impact content update – we’ve got guides on the locations of Naku Weed and Sakura Blossom to help you out if you need it.