There are lots of locations to visit and explore in Genshin Imapct, but one type of landmark you’ll probably want to make a point to seek out as a priority are the Shrines, otherwise each known as the Shrine of Depths. We’re here to help you find them quickly.

There’s a number of these shrines spread across the world of Teyvat, with some in the Mondstadt Region and others hiding away in the Liyue and Inazuma regions. As more regions are added to the game, there’ll be more shrines to unlock, each themed and with its own method of unlocking. These maps cover all of them – read on to learn about locating them more completely and about how to unlock the Shrine of Depths.

We’ve got plenty more help for navigating Teyvat if you want – just check out some more of our Genshin Impact guides covering things like where to find the Nameless Treasure, choosing a gift for Lisa, and Amenoculus locations and Geoculus Locations, plus more general system primers like our cooking recipes list and Elemetnal Combos explainer.

The maps featured on this page are pretty simple, all told. Each map won’t feature the entire world of Genshin Impact, or even the entirety of each of the game’s regions. Instead, it’ll feature everything that’s relevant for each section of this guide – just large enough to feature all of the Shrine of Depths locations within each region.

Once you get near them, the Shrines aren’t difficult to see, so even this zoomed-out map should be sufficient: they’re fairly bland-looking, square-shaped buildings, though they do glow with a mysterious power.

Here’s the maps for each Shrine of Depths type, with the location of each and every shrine:

Here’s the Shrine of Depths locations for the Mondstadt region, with its wind theme. This is of course the region where your Genshin Impact adventure begins, and you’ll require the green Mondstadt keys to open each.

The Liyue Shrine of Depths follow the region’s earthy theme, and will require a Liyue shrine key of the same sort of yellow/gold color that represents that in Genshin. 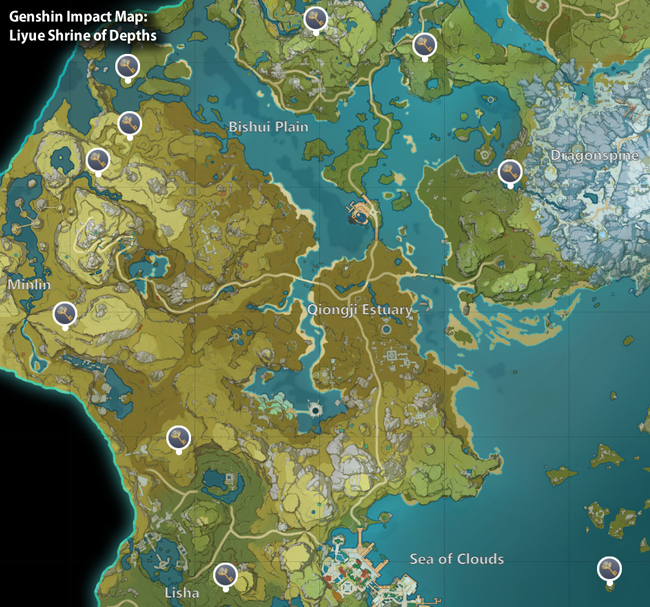 New for the version 2.0 update of Genshin Impact, the Inazuma Shrines will require an electro-themed purple shrine key, as you’d expect. You can get the keys in some slightly different ways in this region, however. 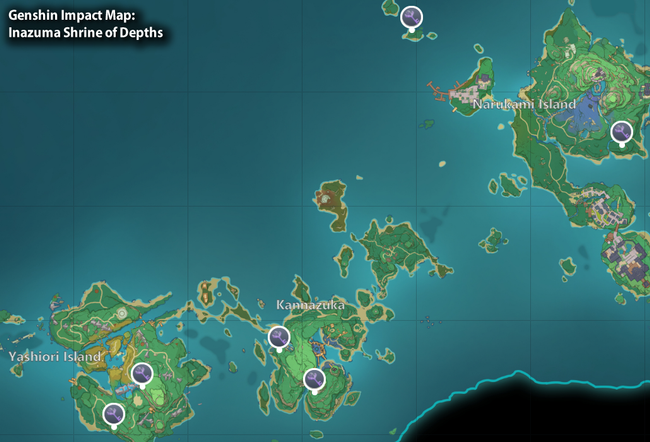 Each Shrine of Depths is well worth seeking out, as inside each one you will find a Luxurious Chest that once opened will reward you with 40 Primogems, which can go towards your next Gacha Banner Draw, plus 60 Adventure EXP, a random selection of Weapons and Artifacts, and finally 10 Sigils. It’s a very good haul for doing nothing other than tracking down the shrine and opening it – and we’ve just made the first part of that trivial. The problem, however, is that opening the shrines requires a key…

As we’ve said above, in order to unlock any Shrine of Depths, you’ll need to use a key – or to be specific, “A key that can break the seal on the ancient Shrines of Depths scattered around Teyvat,” as the in-game description says.

All of these keys are available in similar ways: they can appear as rewards or drops from certain types of content. Early on you’ll be able to recieve one Mondstadt Shrine Key by completing a quest to Upgrade the Statues of the Seven in Mondstadt to Level 6 – this is a nice early Adventure Handbook Chapter 4 quest, so this will in all likelihood be your starter key. Other ways we’ve figured out to unlock more keys are as follows:

WIth higher level content, multiple keys can drop. The keys are region exclusive, meaning they can only unlock that region’s shrines – and if and when Genshin Impact expands with more regions, you can bet there’ll be more themed shrines and matching keys to come.