Aliya Elasra is not a likeable character. She is cynical, untrustworthy, and as stubborn as a wayward child. She is unpleasant to those who care about her, and as a result, the list is rapidly dwindling. Her mentor at the University of Iox calls her into her office one day and tasks her with finding a missing roboticist, Janniqi Renba, who was trying to find… something. Aliya is not a detective. She is an archaeologist, a historian, and a linguist concerned with the ancient lost tongue that has been scrawled across the walls and artefacts of the long-dead civilisation who lived here before her. But, as Heaven’s Vault quickly makes clear, her skillset might be exactly what the universe needs.

Aliya’s job is discovery, and exploration. You travel across the Nebula between tiny, barely-populated moons, on the search for clues about Renba – and about what he found. Many of these clues are inscribed with snippets of Ancient, the language that dominates Heaven’s Vault, and slowly, through trial and error (and more artefacts), you will begin to build a dictionary of words that can help translate more complex sentences. 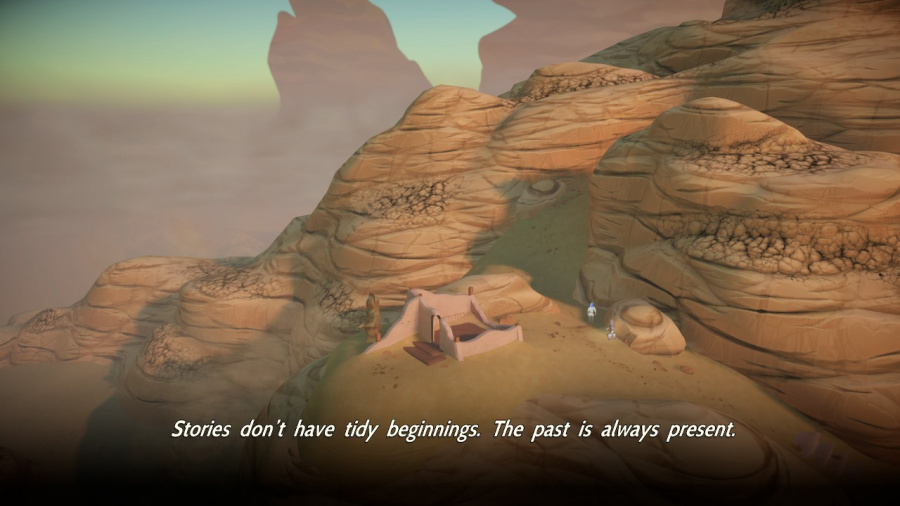 These linguistic puzzles, which require matching known words to a long string of glyphs, are the meat of the game. Whether or not you enjoy language, logic puzzles, and keeping real-world notes will dictate whether or not this is the game for you more than anything else in this review. It’s a joy to discover new words based on your knowledge of old ones, making clever assumptions and drawing educated-guess conclusions. The language of the Ancients pulls Aliya along like a trail of breadcrumbs, and although the game can be completed in record time if you don’t care about finding every site and every secret, Heaven’s Vault is not about rushing to the finish line. It’s not about a result; it’s about the journey.

Aliya is accompanied throughout her journey by a robot she names “Six” – letting him in on the fact that there were five unfortunates before him – and the contempt between the two is, at first, almost too much to bear. Aliya is cruel and dismissive; Six is patronising and anxious. But the way this relationship can change over the course of the game exposes the beating heart of Heaven’s Vault: the vast sea of language, history, and culture are nothing without the people who swim in it.

So much of the joy of Heaven’s Vault is what is not required of you. The literal gameplay is concerned with the language, and with the mystery of Renba and what he was chasing. The threads that weave it all together are the conversations you can have – and they are optional, ephemeral things, with Aliya’s dialogue choices fading away if you aren’t fast enough to choose. So much of the game’s incidental story can be missed by rushing through it, but spending time on a site for long enough – even long after you’ve found what you were there to find – can provide new topics for discussion that sketch in the details of the world just a little bit more. 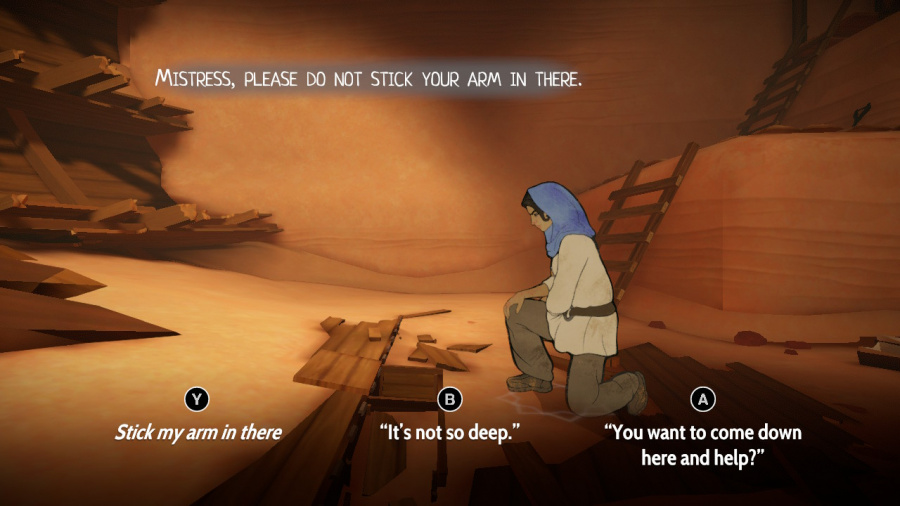 The story of Heaven’s Vault is a vast, sprawling narrative, with unseen branches at every turn, dictating what people think of you, how they speak to you, and what they are willing to help you with. It’s not always a case of “be nice to this person and they’ll give you a present” – sometimes it is a case of hiding certain truths, letting them in on certain secrets, or timing your conversations just right. Perhaps you have to acknowledge your failures as a friend to get Oroi, your childhood companion, to warm up to you again. Some people, like archivist Huang, are tender and delicate, and Aliya’s brash style of affectionate banter will harden their hearts to her. Each one of these conversations can change the way Aliya sees the world, from her understanding of the past to the very names she gives the moons she visits, and although these changes don’t stop you from getting to the ending, they still have an impact on how the story is told.

It’s hard to figure out these relationships at first, since the branches are invisible and, much like real conversation, difficult to predict. There’s also Aliya’s tendency to be a bit of a dick, even when you’re actively trying not to be, which undermines your efforts. There are times when you will find yourself accidentally locked out of a location or a storyline because of a choice you didn’t even know was a choice. But, when Heaven’s Vault gets it right, these branches seem more like real consequences than irritating mistakes.

Where Heaven’s Vault fails is the moments when you can feel it bumping up against its own limitations like a boat against a dock. The art style, which has 2D characters walking around a 3D world, doesn’t always look good, and there are times where Aliya’s Paper Mario-like flatness is more than a little jarring. The worlds are largely populated with background characters that look like sacks of potatoes, who wander around like lost sheep. Occasionally, buttons don’t work, meaning that you miss-time opportunities. 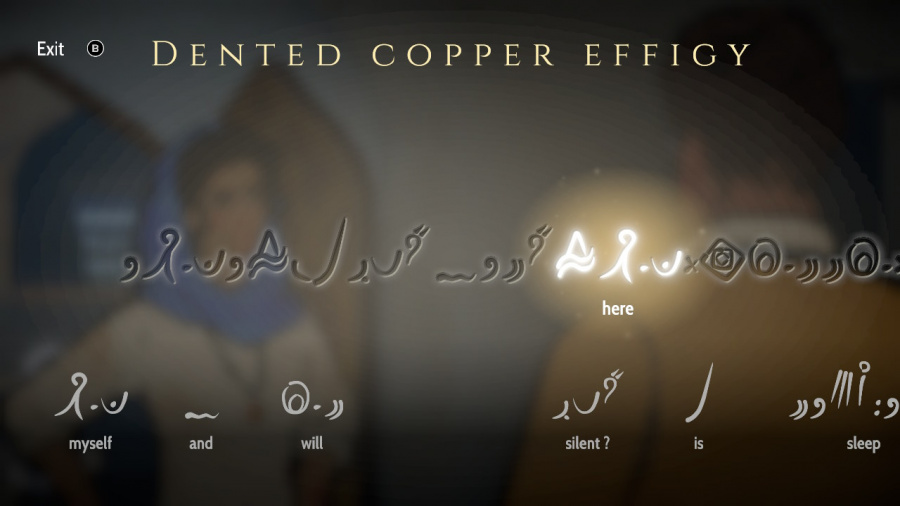 Worst of all, the game hangs every few seconds, presumably because it’s loading some new, fantastic discovery, but it feels a little like watching a constantly-buffering movie, waiting to find out if it finally gave up the ghost and crashed. Sometimes, the translation screens are made unreadable by overlapping words from previous screens that refuse to budge, but with a little bit of fiddling, you can make it work (or reload the game).

Much like the game in general, Aliya’s choice of travel is an exercise in patience. Aliya’s boat, The Nightingale, is what takes her between sites, sailing on a mystical space-river made of water, ice, and maybe the souls of the long-dead. The sailing stretches the meaning of “tedious” to new heights. It is slow, painstaking, and, despite being vastly improved from its initial form when the game was released in 2019, it still largely sucks – unless you’re into the meditative experience of it.

The ship lurches across streams like a drunken salmon, and there is no auto-pilot until later in the game. No, this must be done manually, and the winding rivers of the Nebula often take you on long, meandering paths. There are moments of beauty when the camera pulls out to reveal a palace of galactic clouds, studded with uninhabitable rocks and spires, but it’s like seeing a mountain range out of the car window on a 25-hour road trip across the desert. 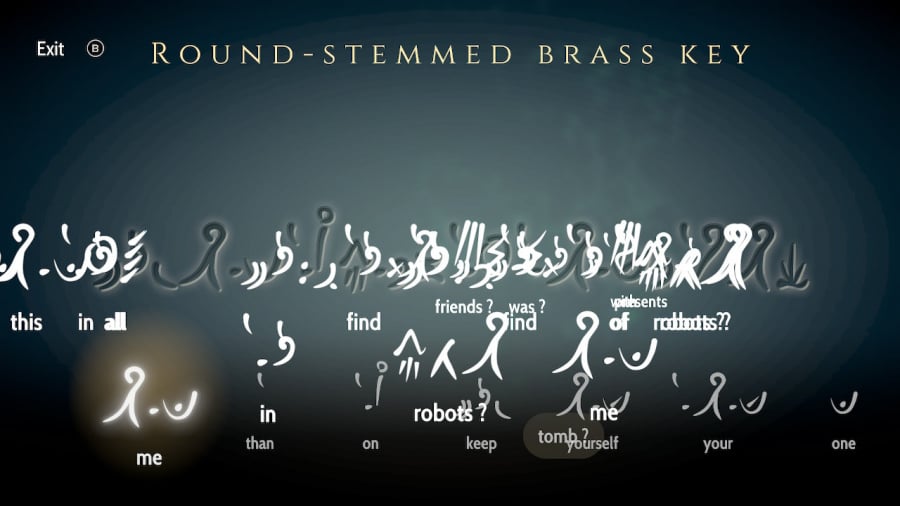 Still, the best thing you can learn from Heaven’s Vault is that patience is often rewarded. Taking your time sifting through the wreckage of the past is not something that needs to be rushed. It will still be there tomorrow, after all. Heaven’s Vault is waiting to be cracked open and enjoyed, but it is best enjoyed at leisure – and it’s even better the second time around, with a robust and exciting New Game Plus. Don’t be afraid to savour it. You’ve got all the time in the Nebula.