In a brief showcase hosted by IGN as part of Summer Games Fest, which they promised would “Steal The Show”, Sega of Europe revealed Hyenas, a new sci-fi squad based multiplayer FPS by The Creative Assembly (Total War Series, Alien Isolation, etc.).

Hyenas takes place in a dystopian future where “rich pricks” (Words from CA’s mouths) are hoarding pop culture merch in private space stations within Mars’s orbit. Players take the role of robbers grouped into teams of three, setting out to steal as much of that pop culture merch as possible while fighting off AI-controlled guards and other player teams that are also trying to take the merch for themselves. Presumably, the team that can escape with the most merch wins a match.

The “pop culture merch” you’re out to steal is exactly what it sounds like. Merchandise no different from what you might buy from the official Sega Shop, for example, is the prize that players are after. The most obvious example would be the Sonic the Hedgehog keychain highlighted in the trailer (Which might also pass as a subtle nod to his debut appearance from Soni- Rad Mobile!), but art from the game also shows Super Monkey Ball items in the background. Eagle eyed viewers can also spot an Atari logo sticker on a subway car seat, a Sony Walkman clipped to a player character’s hip, and a Fall Guys figure. It’s clear that this pop culture merch you’re after isn’t limited to Sega’s own history. Quite the unexpected design choice.

At first glance, this seems like an average garden-variety multiplayer space shooter, so it’s for the best this was revealed on it’s own instead of as part of a larger presentation like the PC Gamer Showcase. Looking deeper shows that this does have some personality to it with it’s quirky cast of player characters, their unconventional objective, and the fact that matches occasionally take place in zero-G. The fact that you’ll be stealing pop culture items makes me think this could be part of Sega’s larger “Super Game” ambition detailed in recent SegaSammy financial reports, as they may be thinking Hyenas could help drive up interest in older Sega IPs within the PC gaming sector, as well as being a sustainable revenue stream as multiplayer games like this tend to be. 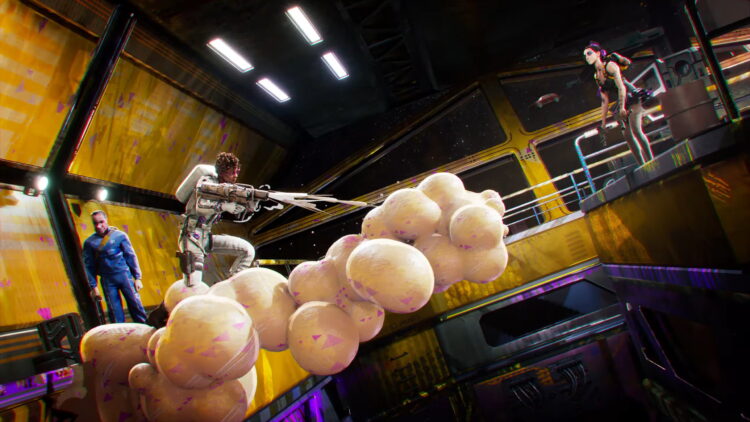 If this looks interesting to you, and you have a reasonably capable gaming PC, you can sign up for the alpha test to try it for yourself and leave feedback for the developers by clicking here, then you can tell us if IGN was overexaggerating with their “Steal The Show” claim. Hyenas is also expected to launch on Xbox and PlayStation consoles (Though they have not yet confirmed if that includes the Xbox One and PlayStation 4 family of consoles) and alpha tests for those consoles will follow at a later date.

There’s a flood of cheap ex-mining GPUs, but you probably shouldn’t buy one

There’s a flood of cheap ex-mining GPUs, but you probably shouldn’t buy one