Mass Effect 3 brings together a slightly smaller squad of warriors to take the fight to the Reapers, but there’s enough of them that you’ll always be leaving some folks behind on the Normandy – which always begs the question – what’s the best squad for each mission in ME3?

The answer, obviously, is deeply subjective. You should always choose characters for the squad of each mission based on your preferences, both in terms of which have skills that mesh well with Commander Shepard’s, but also in terms of who you like most on a personal level.

With that said, certain characters certainly have more to say that’s interesting in certain missions – with that depending largely on if they have a stake in the events of that mission. On this page, we offer some suggests for the best squads to take to ME3’s missions.

Mass Effect 3 is split into two types of missions – main and side quests. You can easily identify a main mission in ME3 because it has ‘Priority’ in the title – though despite that term, the main missions aren’t truly a priority as they never expire. Some side quests, however, can expire.

As the bulk of the main story, Priority Missions are where characters always have unique and in-depth dialogue depending on who you bring and the situation. The below is a best squad choices for each mission recommendation based not on skills or combat, but on what characters have to say throughout each of the main missions:

Priority: Eden Prime – anybody fits well here. While we recommend doing this DLC mission early to get a DLC squad mate, Javik has unique dialogue for every squad mate when he meets you – based on his race. Taking two aliens results in two unqiue & cool observations as a result. However, if you bring Kaidan/Ashley, they will have things to say about your history on Eden Prime. Priority: Palaven – anyone you like. If you do this following our suggested mission order, you won’t have much of a choice and will likely end up with James and Liara. Priority: Sur’Kesh – you’ll be seeing old friends here, so you might want to bring characters familiar with them.  Garrus & Liara will have great unique dialogue if Wrex survived ME1. Likewise for Captain Kirrahe. Alternatively, Javik & EDI have fun dialogue in this mission. Priority: Tuchanka – the dialogue is fairly evenly matched in this mission among all characters. As always Javik has interesting fish-out-of-water dialogue. Priority: The Citadel II – James has a lot good to stay on this mission, and Garrus has knowledge of the Citadel thanks to his C-Sec days.  Priority: Geth Dreadnought – several squad members are great on this mission – though who you choose should depend on your romance situation importing from ME2. If you romanced Tali in ME2, take your love interest from ME1 (Liara / Ashley) to have awkward new partner and the ex dialogue. If you’re romancing Garrus, this will also be acknowledged. Alternatively, EDI and James have great dialogue throughout this mission. Priority: Rannoch – you must use Tali here. Javik is great on this mission as he so often is, but it’s nothing major, so take whoever you like. Pairing Tali with one of her old ME1 friends feels particularly good. Priority: Thessia – taking Javik on this mission is an absolute must. While every single squad mate has some bangers on this mission, the combination of Liara and Javik is explosive on this mission – and be sure to visit Javik’s quarters after the mission for a scene where that continues. Priority: Horizon – everyone has unique dialogue here, but none of them are particularly exciting. Choose whoever you like. Priority: Cerberus Headquarters – EDI is required for this mission. For your second squad mate, we recommend taking your romance choice if they’re a squad member. Garrus is great for some refreences to ME2.  Priority: Earth – this mission falls into two halves; you’ll pick your squad at the start, and again roughly halfway through the mission. The choice honestly doesn’t matter in either half – but we recommend you take along your love interest for the second half at the absolute minimum. 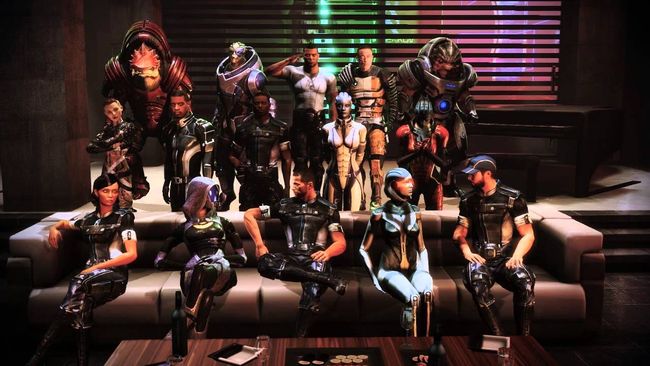 ME3 Best Squad members for side missions & DLC

The nature of ME3’s war-torn story means that a lot of its side content doesn’t feel quite as fleshed-out as in ME2, but that’s balanced out by the sheer number of main missions. However, several side missions are really important and feature returning characters from past games.

Some side missions can also expire, meaning you can miss out on wonderful cameos and war assets that are vital for getting the best ME3 ending choices. If you want to miss out, consult and follow our ME3 mission order guide.

Below, we list every side mission where your choice of squad mates has a material effect on the dialogue throughout the mission. Any mission not listed doesn’t feature significant diferences depending on your squad make-up – so on those, go with your gut.

Grissom Academy: Emergency Evacuation – if Jack survived the ME2 suicide mission, you should consider taking along Garrus and/or EDI, who will both know her from those adventures. You can’t take Tali, as this mission will expire & disappear before she can be recruited.  Tuchanka: Turian Platoon – Garrus has plenty of ambient dialogue here about Turian society.  Tuchanka: Bomb – Garrus once again has a lot to say becaue of the Turian connections.  Attican Traverse: Krogan Team – first of all take Javik, who has interesting things to say about the Tachni. If Grunt survived ME2, bring along Garrus for their ME2 connection – or Tali, if you save this mission for later, but we recommend you don’t. Kallini: Ardat-Yakshi Monastery – take Liara along becaue of the Asari connection. If Samara is alive, she’ll appear, and once again taking Garrus will result in acknowledgement of the shared history. Arrae: Ex-Cerberus Scientists – EDI will have a lot to say about Cerberus during this mission. You can then either bring Tali or Garrus for ME2 squadmate recognition, or Ashley/Kaiden to hear their perspective on Cerberus. Rannoch: Admiral Koris – take Tali because it’s all about her people, of course. Ashley and James both have great dialogue in this, too. Rannoch: Geth Fighter Squadrons – take Tali again because of the vested interest she has. Anyone else is fine. a Leviathan DLC – the Leviahtan DLC missions stretch across multiple smaller missions and planets. All of the squad mates have a broadly equal amount of dialogue, and everybody has dialogue. As ever, Javik has some fun reactions and notes. On Mahavid, EDI has a unique observation. On Despoina, your love interest has a unique moment if present. Citadel DLC – the Citadel DLC all takes place on the Citadel, and you get to choose a squad mate. Everyone has great dialogue in this mission without exception, but if he’s alive the natural choice is Wrex for the main Citadel mission. For the Silver Coast Casino Infiltration, take your Love Interest – though again, everybody is great here. For the Citadel Docks: Retake the Normandy section, EDI has a small unique moment, and every combination of squad mates has unique lines here. However, we recommend ME1 characters for reminsicing about that game’s events.