Mass Effect 3 War Assets guide: every asset that adds to your Military Strength

Mass Effect 3 is all about fighting a huge war for the sake of the fate of the whole galaxy – which is a pretty difficult thing to portray and allow players to keep track of in a choice-based RPG. BioWare settled on the idea of War Assets and a unique statistic called Total Military Strength, or TMS.

To survive the war with the Reapers, the basic mission of Shepard and crew in Mass Effect 3 is to prepare and recruit as many different people, technologies, weapons, and anything else you can get your hands on to have the best Total Military Strength possible. The higher this number is the better. It can be checked and displayed using the War Terminal in the Normandy’s War Room, and your with your TMS/War Assets ultimately used to determine your fate and which Mass Effect 3 endings are available to you.

On this guide, we list every single War Asset in ME3 and their TMS values, plus broadly explain the system and what you need to know about War Assets in a more general way, so you know how much you need to think about this system in relation to your progress in Mass Effect 3.

Mass Effect 3 War Assets, Total Military Strength, and what you need to get for each ending

First of all, it’s worth pointing out that you can check in on your Total Military Strength at any time from the Normandy’s War Table room; there’s a terminal dedicated to tracking your War Assets. This menu will break down the War Assets you’ve acquired in a handful of categories – the same categories we use later on this page – but also give you a total milirary strength score, effective military strength score, and a readiness rating.

The rating that really matters is your Total Military Strength – your War Assets – as this is the one that will determine what happens in the final stages of Mass Effect 3’s story. Your Military Strength is determined by various actions in ME3, but also is one place where the consequences of your choices throughout the trilogy most consistently echoes.

Here’s the main thing you need to know about War Assets and Military Strength: if you play ME3 naturally, you will easily reach the end with a good amount of War Assets and more than enough that your ending options won’t be restricted. This goes doubly if you’re playing with the three DLC packs (Citadel, Omega, and Leviathan), as all three add significant Military Strength resources – the better part of 1000 War Assets. You would have to deliberately play quite poorly and had especially disastrous play-throughs of ME1 and ME2 in order to get the worst possible results.

We cover the endings and the Military Strength brackets (in the original game, at least) in our full Mass Effect 3 Endings guide, which has significantly more spoilers. The main thing that you need to know, however, is that if you simply give it your all and complete the majority of content in ME3, you’ll be able to choose between all three endings. If you also go deep on the other games, you should be able to have an War Assets that will even unlock a secret ending stinger tease that isn’t present in other endings.

The spin-off games and apps are no longer around, nor is the multiplayer included in Mass Effect Legendary Edition – so the remastered version of ME3 rereleased in 2021 has rebalanced the entire system. Total Military Strength and Effective Military Strength are now one identical stat – Total Military Strength. The point value ‘gates’ that unlock different endings have been increased, too. With that said, the entire game has also been rebalanced to ensure you can still access every ending simply by playing the games and enjoying their content, with no multiplayer or extracurricular activities required.

If you’re unsure on exactly what order to tackle ME3’s missions in and are worried about missing a quest that leads to war assets, consult our ME3 Mission Order page, which makes sure no time sensitive missions pass you by. 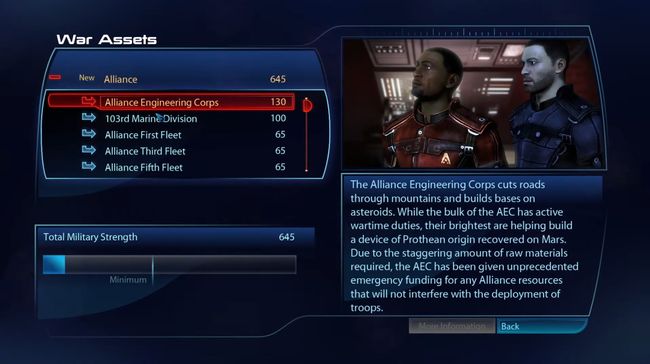 Here’s every War Asset present in Mass Effect 3 and its various DLCs, listed broken up by the same categories they’re split into when you look up your War Assets in the Normandy War Room. We include where and how each War Asset unlocks, plus the value of each. Please note that these values are based off the original release of the game, and some may have been slightly rebalanced.

Unless you have an exceptionally high paragon or renegade score and/or made certain choices in the past games, you may be forced to choose between the Quarians or the Geth, which might mean these assets disappear.

The Krogan assets are in combat with the Salarian ones – and it’s basically impossible to fully please both parties. So it won’t be possible to get all of both, but a Shepard who approaches the Krogan and Salarian missions carefully will be able to maximize their gains.

The Quarian War Assets are tied up with the Geth – if you get a particularly bad or one-sided outcome from their showdown in Rannoch, you might lose all of the assets from one side. If you navigate things carefully, you can keep all assets from both sides.

Some of the key Salarian War assets will depend heavily on your actions on Tuchanka, where you will to an extent be forced to make a decision between them and the Krogan.

Dr. Mordin Solus: Mordin must survive ME2, and then you must convince him to sabotage the cure during Priority: Tuchanka. Then he becomes a war asset (25 War Assets) Major Kirrahe: hold the line! Kirrahe must survive ME1. He must then also not be killed in ME3, which only happens if Thane survived ME2 and is spoken to aboard the Citadel before Priority: Citadel II (20 War Assets) Salarian First Fleet: do as the Salarians ask and sabotage the Genophage cure in Priority: Tuchanka. Warning, this puts your Krogan war assets at risk (150 War Assets) Salarian Third Fleet: you must have saved the council & Destiny Ascension during ME1’s ending. You must also make sure the Salarian Councilor survives the assassination attempt during ME3 (125 War Assets) +8 War Assets for completiung Citadel: Heating Unit Stablizers Salarian Special Tasks Group: if Kirrahe died in ME1, you can speak to Tolan when undertaking Priority: Sur’Kesh (35 War Assets) STG Task Force: you must have let the council die and Destiny Ascension be destroyed in ME1, but then prevent the Salarian Councilor from being killed in ME3 (70 War Assets)