Once you are set loose in the Citadel in Mass Effect, Commander Shepard will be bombarded with a bunch of side quests – and one of the most curious is Scan the Keepers, a hunt to unravel the secret of the space station’s mysterious caretakers.

The quest can be picked up as soon as you’ve headed to the Citadel Tower Council Chambers and had the hearing about Saren’s actions. On this page, we’ll explain how to complete this unique quest, complete with a list of keeper locations and a keeper location map to make finding them all nice and easy.

Scan the Keepers – how to start the quest

You can start the Scan the Keepers quest one of two ways. First of all, you can encounter Chorban after meeting the council for the first time. He’s hard to miss – he isn’t there when you go into your Council Meeting, but is right in your path on your way out of the Citadel Tower once the meeting has taken place.

He’s a Salarian that appears to be fiddling with a Keeper. Talk to him, and you’ll be able to use dialogue choices to offer to help him on his mission, which kicks off the Keeper Scanning quest.

Alternatively, you can access the quest in a secondary way through another quest, Jahleed’s Fears. This side quest can be accessed in the C-Sec Security area of the Citadel. There, there’s a Volus named Jahleed putting in a complaint about Chorban, the quest-giver. It turns out Jahleed is also involved with the illegal keeper scanning activity, and so if you undertake his quest, you can then go to speak to Chorban in the Lower Wards and meet him that way.

However, regardless of which action you take, you’ll be able to continue scanning the keeper for Jahleed once the mission is complete.

To avoid messiness, however, we suggest keeping things civil with Corban and agreeing to continue to scan the keepers; you’ll miss out on a handful of Paragon or Renegade points this way, but it keeps things tidier. 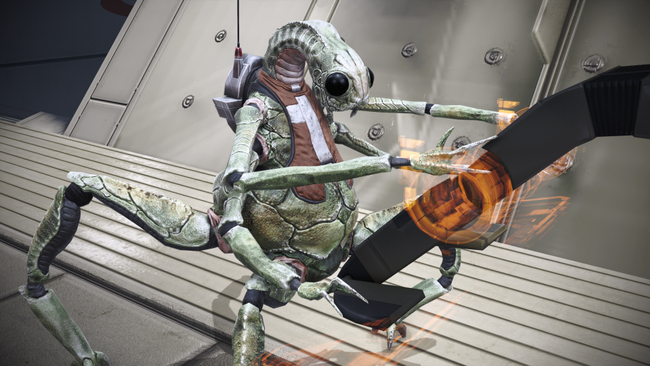 Once Jahleed has given you the scanner, either in the Citadel Tower or the Lower Wards, your job is now to scan 20 Keepers to complete the mission. The mysterious green aliens are found all over the Citadel’s various zones, always working away and repairing the station at various interfaces.

There are actually 21 Keepers in total, though you only need to scan 20 of them to complete the quest. Each keeper you scan rewards a small amount of cash and XP, and additionally completing the quest and keeping Chorban alive will have some minor repercussions in Mass Effect 2.

Here’s the Keeper Locations, broken up by areas of the Citadel, to make location them even easier. If you’re getting lost, use your map via the pause menu to cross-reference it with ours, or use the orange signage throughout the Citadel to get your bearings. Each Keeper can only be scanned once, and if the interaction interface doesn’t appear, that means you’ve already scanned it – except the one outside the Citadel Tower, which you can always interact with. Scanning the Keepers is referenced in Mass Effect 2 as a save import consequence.

First, the Keeper Locations map, followed by descriptions of each Keeper on the map, with the numbers matching those featured on the map. You can, of course, find and scan the keepers in any order: 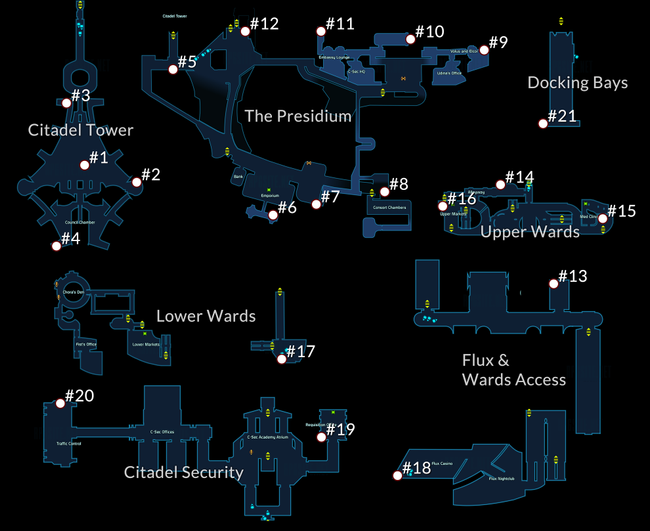 Citadel Tower: Right in front of you after talking to Chorban

Citadel Tower: On the side of the Citadel Tower building, in a side area near the stairs up to where you meet the council. Past Admiral Kahoku.

Citadel Tower: Opposite side of the Citadel Tower, diagonally across from where the last Keeper is – on the left as you head from the Citadel Council platform towards the exit.

Citadel Tower: Go to the very top level where the platform is where you meet the council; on the right-hand side, hiding up a corner, there’s a Keeper working away.

Presidium: Right outside the Citadel Tower; as you leave the elevator it’s right in front of you, next to an Avina terminal.

Presidium: In the rooms behind the Citadel Emporium Shop manned by an Hanar – go past it, to the back of the area, up some stairs. The Keeper is in these stock rooms.

Presidium: Just near the Citadel Emporium Shop. Look for the Krogan statue – it’s directly facing a little side pathway where this Keeper is hanging out.

Presidium: Next to the entrance to Sha’ira’s place, where you meet the consort for certain side quests.

Presidium: Inside the office shared by the Elcor and Volus in the embassy area.

Presidium: In an otherwise empty side-room – from the Human, Elcor & Volus embassies, exit and head up the stairs on the opposite side. There’s a few rooms up here, including the C-Sec offices and a Bar. In another room, among a bunch of diplomats, is this Keeper.

Presidium: Just east of the entrance to the Citadel Tower, there’s a wide open area of sorts; this is where a C-Sec officer is arguing with a Preaching Hanar. In the corner here, just to the right of the elevator, is the Keeper.

Wards Access: in the ‘Wards Access’ area, which is basically a corridor linking areas. Access it from the elevator nearest the Citadel Tower elevator, just east of it. In here there’s a small side room; a Keeper works at the back of it.

Upper Wards: in the area of the map for the Upper Wards marked ‘Alleyway’ – where at one point in the story you encounter Tali. In an otherwise empty room, the Keeper is hard at work.

Upper Wards: Go past the entrance to the Med Clinic and around the corner. To the left of the fast travel point near the Med Clinic, a Keeper is silently doing its vital work.

Upper Wards: as far left as you can go in this area, there’s a door that leads to a small shop area with a number of stores. At the back-left of this room there’s a Keeper to scan. This is the room where Conrad is, for the record.

Lower Wards: This small area of the Wards can be reached either by taking the stairs near the Med Clinic in the Upper Wards, or by using the middle-southern exit of the Security area. Here, there’s a bunch of vehicles, a chatty Alliance Soldier, and a scannable Keeper.

Flux: You can reach Flux from a staircase in the Upper Wards. Up here, in the Quasar Gambling area, there’s a Keeper at the very back of the upstairs area.

C-Sec Security: On the far left side of the Security area, there’s a room where C-Sec officers are running traffic control of sorts. As well as a bunch of terminals you can interact with for EXP and Credits, there’s also a keeper on the far end of the room, behind a railing.

Docking Bay: You can reach the docking bay from the elevator in the middle of C-Sec Security. At the end of the docking bay walkway, past the Normandy and in its right, there’s a Keeper to scan.

Mass Effect Choices & Consequences: decisions that matter across the trilogy