One of the new additions in Monster Hunter Stories 2: Wings of Ruin is the existence of sleeping monsters on some of the game’s overworld maps. Known as royal monsters, they offer a unique and significant challenge to the player.

Ultimately, the Royal Monsters are entirely opitonal side content – think of them as combat-focused side quests. You never have to engage with them if you don’t want to, and even if you stand right next to a royal monster, it won’t wake up unless you directly interact with it.

With that said, there’s plenty of reasons players might want to tackle the Royal Monsters and take them on in combat – as the rewards can be pretty fantastic. On this page:

Where to find all Royal Monsters in Monster Hunter Stories 2

There’s a total of 6 Royal Monsters you can find within the game – 2 each for Alcala, Loloska and Lamure respectively. While there are repeats for one Royal Monster in Alcala, the rest of the Royal Monsters are completely unique.

Additionally, while the first time you see a Royal Monster will always be the first time you’ll have a chance to fight a given monster, every Royal Monster in the game can eventually be fought, and recruited, as a regular mob. It’s also worth noting that royal monsters do respawn when you leave the area they’re in or return, or change the time of day. You can use this to farm various materials or even eggs

With that out of the way, here are the game’s 6 Royal Monsters:

Tigrex is probably the first Royal Monster that you’ll find, since there are at least 3 locations to discover him in Alcala. If you want to attempt to recruit him early (more on that later), the easiest location to do so would be through the Harzgai Hill – Inner Catavan Outpost. You’ll find him on the path to the right of the Basarios rocks. 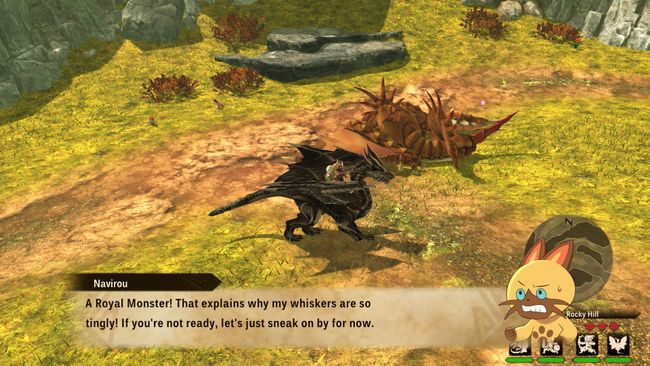 Monoblos is also found (relatively) close to the Harzgai Hill – Inner Catavan Outpost. Follow the path to the west as it winds down south and then back north, and you’ll run into it with little problem. 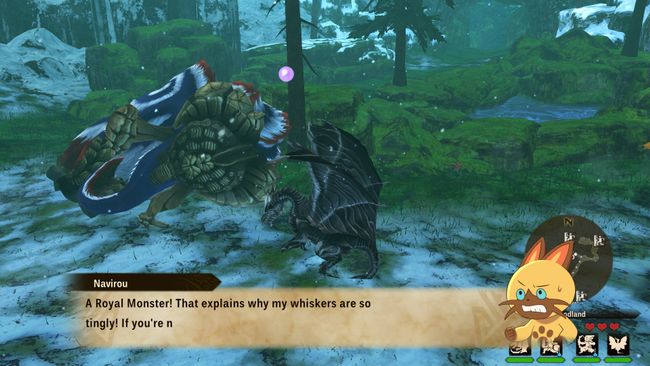 Gammoth is the first of the two Royal Monsters that you’ll be able to find in Loloska – and it’s practically impossible to miss, next to the Woodland Catavan Outpost. 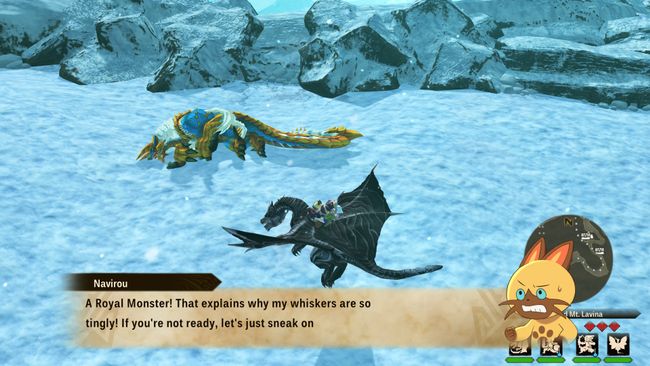 This is another Royal Monster that’s impossible to miss – simply head down the mountain from the Lavina Glacial Peaks Catavan Outpost, and you’ll find it sleeping in the snow. 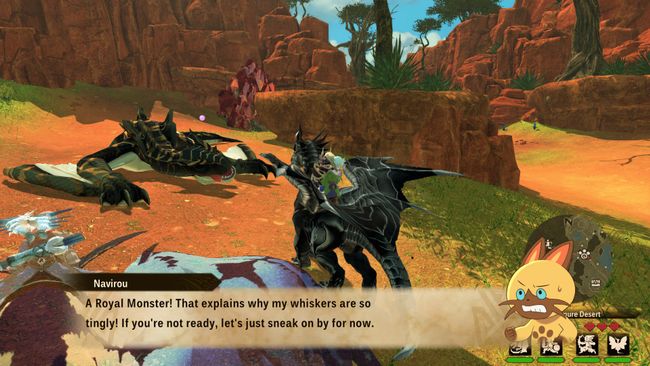 This is the first of the Lamure Royal Monsters, and this one really is impossible to miss. It’s right next to the Sadona Barrens Catavan Outpost. You’ll see it as soon as you spawn in. 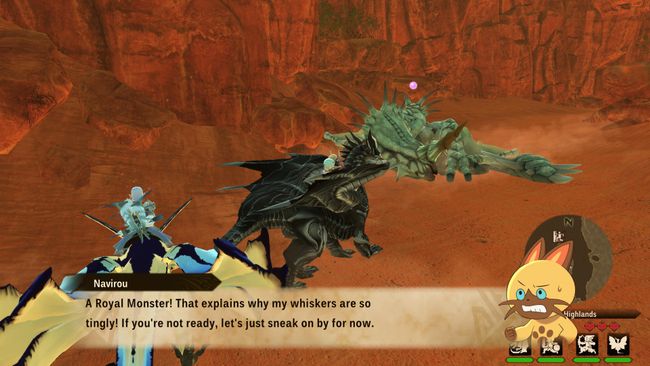 This one is tucked out of the way, but you’ll still run into it sooner or later as the story takes you to the Lamure Pit. You can find him on the path north from the Jalma Highlands Catavan Outpost.

There is one primary reason why you might want to get in on hunting Royal Monsters: to make things easy – by making things really hard for you for one encounter. What we mean by this is simple – Royal Monsters are the first chance you’ll have to get particularly strong monsters, dozens of hours before you would be able to normally.

When you first encounter Tigrex and Monoblos in Alcala, you’d have to finish all of Alcala’s story, and then all of Loloska, before you can get to Lamure and have the chance to find these monsters normally. When you find Gammoth and Zinogre in Loloska, these monsters won’t be normally obtainable until the end of the game.

If you can manage to force a Royal Monster to retreat to its den, chances are you’ll have a strong early game Monstie that will last you until the endgame. Case in point – I still have my Royal Monster Zinogre Monstie for the post-game.

How to make Royal Monsters Retreat in Monster Hunter Stories 2

While there are specific methods you can use to increase the chance for a monster to retreat after a battle, the simplest way is to pelt it with a Paintball within 3 turns of finishing the fight. If you do so, there’ll be a 55% chance that they’ll retreat to their den – which gives you a guaranteed opportunity to gather an egg.

You can’t do this easily your first time hunting a Royal Monster, as you won’t be able to see their health bar, but any time after your first hunt you should be able to plan accordingly to pelt them with a Paintball in time to enable a retreat. 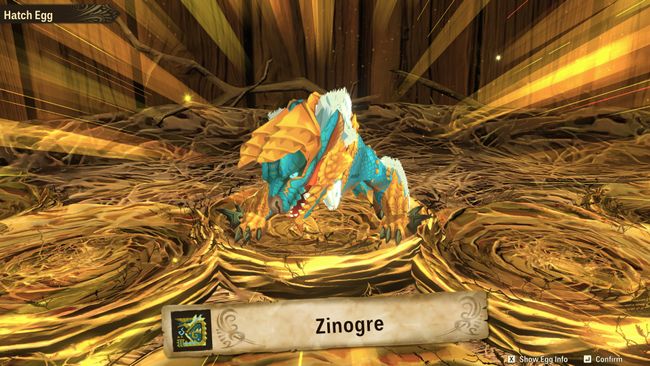 In short, in order to grind a Royal Monster for their Monstie, you’ll want to do the following:

Prepare accordingly. Make sure your equipment is upgraded to a reasonable level for the zone the Royal Monster is in, and that your elemental weakness is not what the Royal Monster will put out – no Ice Weakpoint if you’re tackling Gammoth, and that goes the same for your Monsties! Carefully defeat the Royal Monster for your first time, making sure to learn their patterns, and how to mitigate them. Then, you can attempt to force them to retreat. Battle them again, but once they are low enough HP, pelt them with a Paintball, and proceed to finish the fight within 3 turns. If successful, there’s a 55% chance that they will retreat to their den. Once that’s worked, enter the den, grab an egg (shoot for a high quality one if you’re feeling lucky), and get out.

If all goes well, congratulations – you’ve got yourself a powerful Monstie far sooner than you’d be able to otherwise, in four easy steps.

Alternatively, each of the royal monsters has an alternative, non-paintball method to force it to retreat. However, these are often not available until later in the game, as you’ll require certain items or skills. Here they are, all the same:

The Knifepedia: Paralysis item can be purchased from Melynx stores in order to craft a paralysing item, which is needed for a couple of these strategies.

Regardless of if you use these late game strats or just try to take down Royal Monsters with paintballs earlier on, you can master this and repeat as many times as you’d like to stack a Monstie with powerful genes – though that likely won’t be necessary.

Royal Monsters are always a safe bet for your mid-game party, but beyond that, they’re just a ton of fun to attempt to hunt. Good luck if you choose to attempt to slay these beasts to salvage their young – and happy hunting!