Netflix appears to have given the game away on a brand new 3D Sonic animated series a little earlier than planned.

The streaming service announced the new show on its @NXOnNetflix Twitter handle, before very quickly deleting the tweet and choosing to stay away from the topic since. The post read, “Rings? Check. Sneakers? Check. Speed? SONIC. SEGA’s legendary video game icon Sonic the Hedgehog races onto Netflix in a new 3D animated series from @SEGA, @WildBrainHQ and @ManOfActionEnt premiering in 2022.”

You can see a screenshot of the original tweet below. 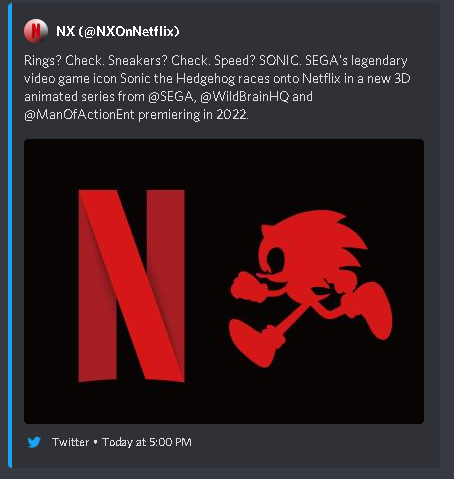 You’ll know Sega, of course, but as for the other companies involved, Wild Brain owns series like Teletubbies, Degrassi, and Inspector Gadget, while Man of Action is a writer collective known for projects such as Ben 10 and Big Hero 6.

Sonic has already found silver screen success this year after his live-action film surpassed $200 million at the box office in just ten days. A sequel to that has already been confirmed, so a Netflix series probably makes sense too, right?

We’re assuming the show will be revealed again – but properly this time – at a later date. Would you be excited to see a new 3D Sonic animation, or are you not feeling it? Share your thoughts with us below.