Something of a tradition in the Persona series are fusion-based quests. These side quests are simple – they require you to create Persona with certain skills and abilities by making clever use of the in-game fusion system.

This particular string of side-quests returns in Persona 5 Strikers, where they’re known as Prison Mail. Prison Mail takes the same form in Strikers despite it being quite a different game to its predecessor – these quests play out just like the Strength S-Link puzzles in Persona 5 Royal.

There are four of these quests in total. On this page, we list them, and explain exactly how to solve each of the Prison Mail quests with Persona fusion solutions.

While there’s a range of different side quest requests in Persona 5 Strikers, one strand of these quests that firms something of a theme are the Prison Mail requests, which as described are basically little puzzles where you must find the solution using Persona fusion.

Each quest will see Lavenza asking you to present a Persona with a specific skill. You can either present it through using a skill card – and those are rare – or you can do it through fusion.

On this page, we list every Prison Mail quest, all their objectives, and Persona fusiong solutions for how to fuse to complete them and get their rewards.

This quest taks you with creating the Justice arcana Persona Archangel with Amrita Drop.

To do this, fuse Hua Po (level 14+) and High Pixie (level 14+). You’ll be able to inherit Amrita Drop onto the resultant Archangel, giving you what you need to complete the quest. To get High Pixie (Fool), find one in Sendai Jail. If you need to get your hands on Hua Po (Hanged Man), try fusing Sucubus (Moon) and Andras (Devil), both of which can be picked up in Shibuya Jail.

You’ll get a Diarama Skill Card in return as a reward. 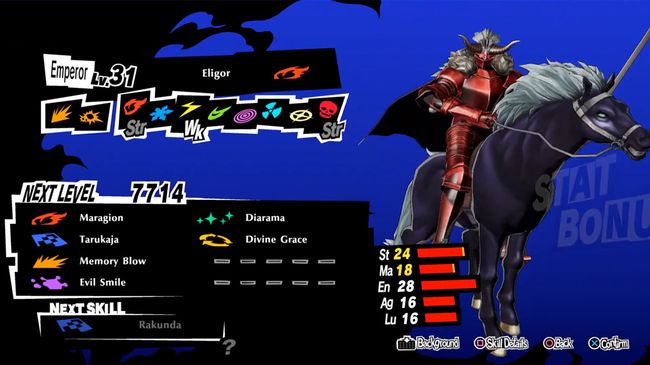 The second part of the Prison Mail quest takes you back to the Velvet Room from August 8. This time, Lavenza wants you to show her the Persona Eligor with Divine Grace. Eligor is an Emperor arcana Persona.

To get Eligor with Divine Grace, try fusing Ame-no-Uzume (level 29+) with Lilim (level 25+); you’ll be able to inherit the Divine Grace skill as part of that fusion.  To get Ame-no-Uzume (Lovers), fuse Lamia (Empress), and Orthrus (Hanged Man). Both of these can be had from Sendai Jail, as can the Lilim (Devil) you also need.

You’ll get the Rebel Soul skill card as a reward.

Prison Mail part 3 picks up where the second left off, with Lavenza this time asking to see the Star arcana Persona Kaiwan with Makouga skill.

Your reward this time is a Soul Thief skill card.

The fouth entry in Persona 5 Strikers’ Prison Mail saga will arrive in the batch of requests that unlock on August 17th. This time, Lavenza wants to see a Mitra with Regenerate 1.

To fuse the Mitra with Regenerate 1, you’ll first need the Persona Setanta. Setanta learns Regenerate 1 at Level 31. Fuse that Sentanta (level 31+) with Principality (level 27+), and inherit Regenerate 1 from Sentanta.  This actually matches up to the 3rd Prison Mail quest – grab Principality and Setanta from Sapporo Jail if you need; get Setanta to Level 31, then fuse.

This time out you’ll get a Charge Skill Card as your reward. 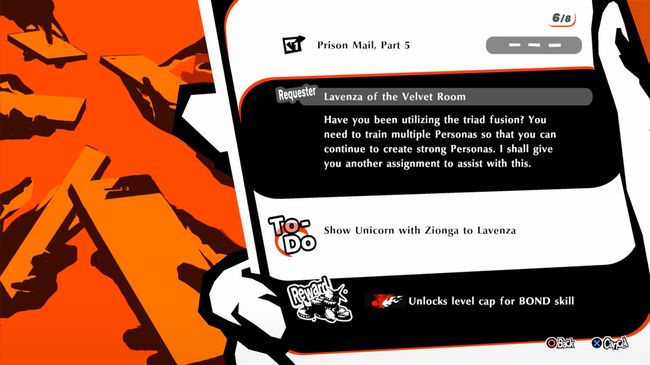 To solve this and get a Unicorn with Zionga, you’ll want to fuse a Shiisha (level 35+) with Black Ooze (level 33+). Once again, you’ll choose Zionga as your skill reward to carry over to the Unicorn this persona fusion creates.  To get yourself the required Persona, go to the Okinawa Jail – there you can get Black Ooze (Moon) and Shiisaa (Chariot).

An increase to the level cap of your Bond Skill is your reward.

We’re well over halfway now. The sixth Prison Mail quest asks you to creat the Magician arcana Persona Queen Mab with the Technical Adept skill. The quest was avalable for us from August 24th.

To get this, you’re going to want to Fuse Kikuri-hime (level 40+) and Kaiwan (level 37+) – you’ll be able to carry over the Technical Adept skill required to impress Lavenza. If you need to get the required Persona, you can find Kaiwan (Star) in Sapporo Jail and Kikuri-hime (Priestess) in Kyoto Jail.

Your reward for this is another increase to the level cap of your Bond skill.

The seventh Prison Mail quest unlocked for us on August 28th alongside a bunch of other quests. This time, Lavenza wants a Trumpeter with Diarahan. Here’s how to fuse that Judgement arcana Persona:

To get your Trumpeter with Diarahan, fuse Saravasti (level 48+) with Norn (level 54+). You’ll be able to carry over the required skill to your shiny new Trumpeter. To get Sarasvati (Priestess) and Norn (Fortune), find and capture them in the Osaka Jail.

This time around, your reward is another Skill Card, this time for the skill Regenerate 3. 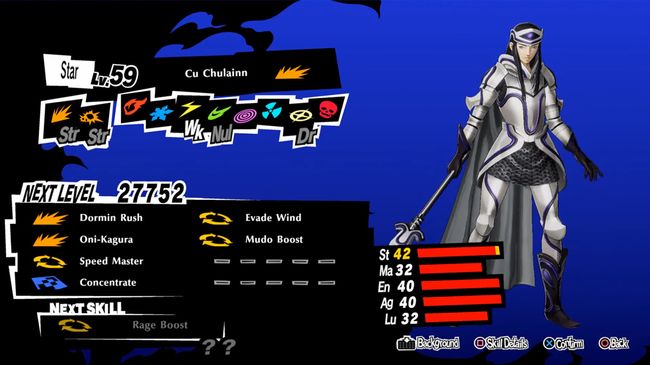 The eighth Prison Mail quest popped for us on August 30th. Lavenza requires you to show her the Star arcana Persona Cu Chulainn with the Concentrate skill. This is the final Prison Mail quest on a normal, first play-through.

At a base level, to get your Cu Chulainn with Concentrate, you’ll need to fuss Nebiros (level 55+) with Mot (level 59+). As always, you can then inherit the required Concentrate skill to complete the Prison Mail request. To get Nebiros (Devil) and Mot (Death), find them in the Abyss Jail if needed.

A Mediarahan Skill Card is your reward.

This final Prison Mail request is only available in Persona 5 Strikers’ New Game+ mode. For this request, Lavenza wants the powerful justice arcana Persona Dominion with the Nuke Amp ability. For us, it appeared on August 30th.

To get a Dominion with Nuke Amp, you’ll need to fuse Mot (level 62+) and Forneus (level 60+). As always, you then carry over the required skill, in this case Nuke Amp. To get Mot (Death) for this, go to the Abyss Jail. To get Forneus (Hierophant), grab it from the Tree of Life and Wisdom.

This nets you a Fortify Spirit skill card.