Before we get started, let’s make one thing clear: Persona 5 Strikers is a direct sequel to Persona 5. It is not the kind of action game spin-off that we’ve come to expect from Omega Force — the Koei Tecmo studio behind the Dynasty Warriors series and the many, many ‘musou’ adaptations that have been released in recent years. Strikers has much more in common with its JRPG predecessor than it does the hack and slashers that surround it.

Having said that, Strikers is a streamlined Persona experience. In terms of structure, it does away with the concept of free time and social links — but the simplification of the Persona formula works within the context of the story. Indeed, this is all about the return of the Phantom Thieves — the ragtag group of teenagers who forged unbreakable bonds with one another throughout Persona 5. The gang get back together several months after the events of the previous game, with the promise of a relaxing summer vacation on their minds. 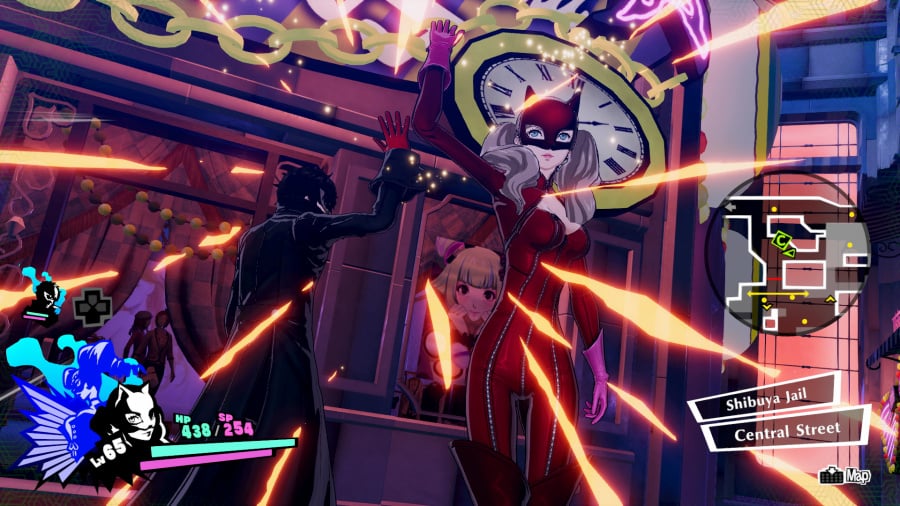 Naturally things don’t quite go to plan, and it’s not long before the Phantom Thieves find themselves tangled up in another crazy conspiracy. The plot itself involves a smattering of fresh faces, all of whom are well written and placed into the narrative with care. It’s another intriguing storyline that you’ll want to see through to the end, but ultimately, Strikers plays it safe. There was an opportunity here to try something new or weird, but in a lot of ways — thematically, especially — Strikers walks a road already well travelled by Persona 5.

As such, it goes without saying that if you haven’t played Persona 5, you’re going to miss out on so much of what makes Strikers’ story tick. There are no lengthy character introductions here; it’s assumed that you’re already familiar with Joker and his pals, as well as their past exploits.

What’s more, Strikers goes to surprising lengths in order to further develop its already established cast. Moments of considered character development are dotted all across the adventure, and it’s great to see these strong personalities become even better realised as the journey progresses. And it really is a journey; the Phantom Thieves get to travel all across Japan as they track down yet more disturbances in the nightmarish Metaverse. The game’s got a cosy road trip vibe that really helps set it apart from the intentional day-to-day repetition of Persona 5. 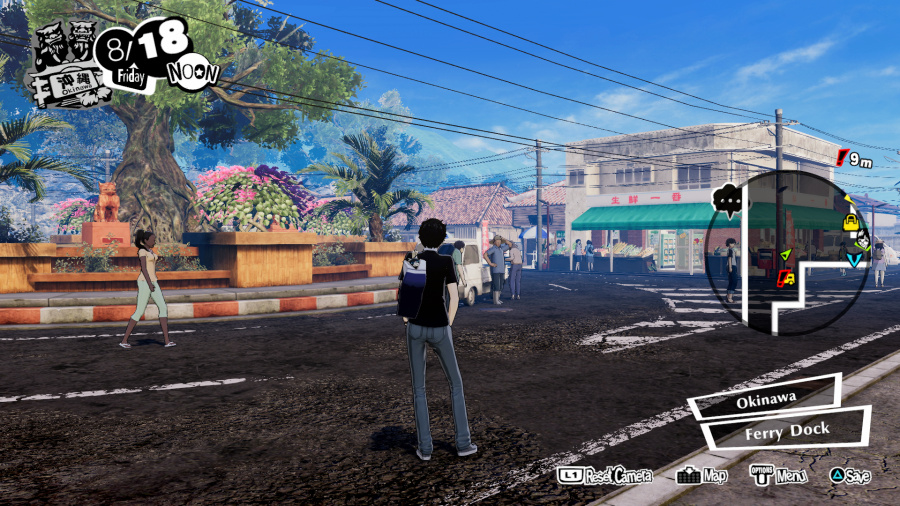 There is a sameness to the first few chapters of Strikers, however, before the overarching plotlines really start to kick in. Go to a new city, investigate odd happenings, conquer the Metaverse, repeat. This rather rigid structure is broken up by long dialogue scenes and fun social events where the gang visit local attractions, but again, this is very much a streamlined version of Persona.

The only real freedom that you have takes the form of exploration within dungeons. Strikers’ ‘jails’ are essentially the same kind of twisted mindscapes that you had to navigate in Persona 5, except they’re generally bigger and more dynamic. Some jails are better designed than others, but overall, there are a number of cool concepts at play, with platforming sections and light puzzle solving adding welcome variation from time to time.

But the real draw of these jails is the combat — the action combat. In case you don’t already know, Strikers does away with Persona 5’s turn based battle system in favour of real-time action. It’s obviously quite the change, but by the end of our playthrough, we absolutely loved it. Now, we’re not saying that one is better than the other, but Strikers’ blend of fast-paced, acrobatic action and necessary tactical nuance gives it a distinct identity. It’s a combat system that works brilliantly when it’s at its best, and as an action-based adaptation of Persona 5’s rulebook, it’s an impressive achievement. 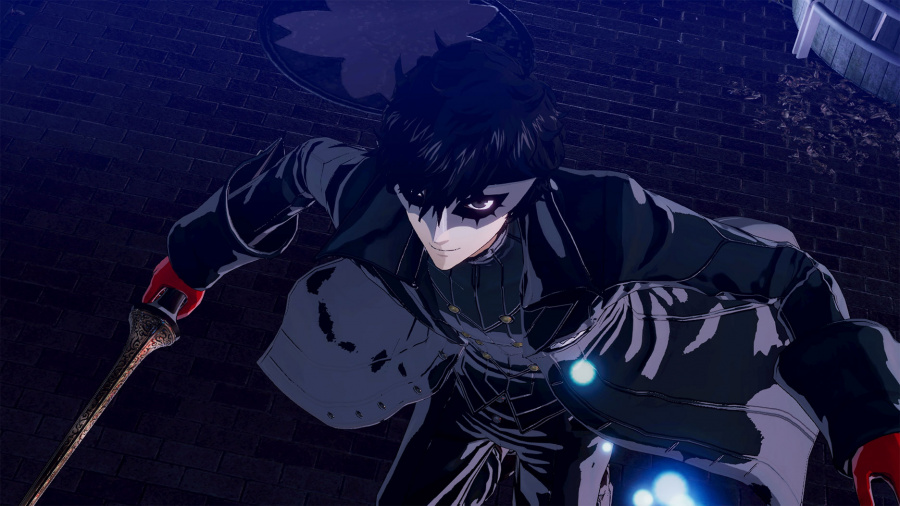 And by that, we mean that you’ll still have to exploit enemy weaknesses and switch between party members at the right time if you want to seize victory. In a way, it reminds us of the stop-start combat system in Final Fantasy VII Remake. It’s built on a foundation of quick combo attacks, dodging, and special moves, but you can pause the action at any time, target an opponent, and then select a specific skill in a bid to deal big damage. Just like in Persona 5, hitting a weakness leaves your foe defenceless, which can lead to both additional attacks and all-out onslaughts.

There’s also depth to be found in the way that each Phantom Thief fights; everyone has their own unique moveset and special abilities. Joker can, of course, switch persona mid-fight in order to cover different weaknesses. Meanwhile, Ryuji can brace himself, allowing him to charge straight through incoming blows, and Ann can set her whip ablaze, maximising her elemental damage. Being able to swap between characters whenever you like prevents the hacking and slashing from becoming stale, and once everything clicks — the combos, the skill usage, the baton pass — a really rewarding rhythm emerges from the chaos. 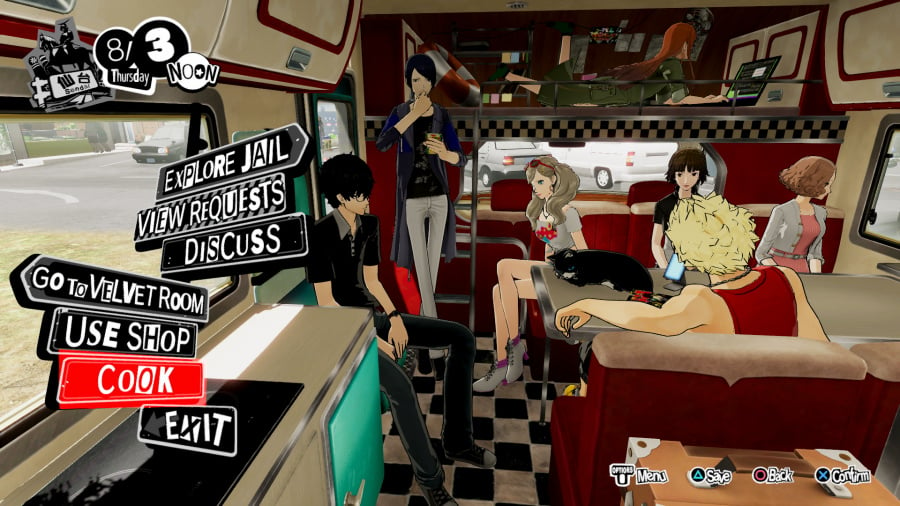 This rhythm is especially prevalent during some of the game’s fantastic boss fights, which are a definite highlight. Our only problem with the title’s tougher foes is that sometimes, you won’t be packing the elements that you need in order to hit a weakness. You can only take four party members into battle, and if you don’t happen to have the right skills for the job, then you’re in for a far harder (and much more tedious) time.

With only educated guesswork to go on before an important encounter, it can feel a bit unfair to stumble across a boss halfway through a jail, only to realise that you can’t strike at its weak spot because you’ve left nuclear specialist Makoto, or wind specialist Morgana on the bench. This is where Joker’s ability to wield a range of personas is supposed to come into play — but relying on Joker alone will sap your already limited SP (your skill resource) far too quickly. Although these situations are thankfully rare, finding yourself stonewalled by the odd boss feels like an unnecessary annoyance. Being able to substitute an inactive party member — as you can in Persona 5 — would be an instant fix. 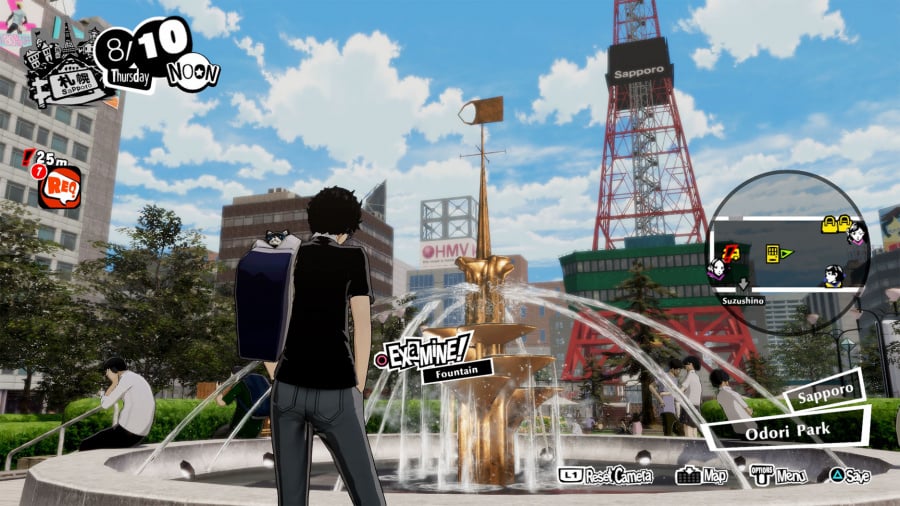 Other, more minor niggles include a bit of a wonky camera when you’re fighting in smaller rooms, and the lack of general commands for your AI-driven party members. Again, smaller issues, but they’re bound to creep up at some point.

Now we know what some of you might be thinking: you’re a fan of Persona 5, but you’re not that into action combat. Our advice is honestly not to worry about it. Strikers isn’t the kind of button masher that wreaks havoc on your joints — and it’s certainly not the kind of hardcore action game that’ll tie your fingers in knots. As mentioned, it is fast, but the fact that you can pause time by summoning personas gives combat a manageable ebb and flow. Plus, there is an ‘easy’ mode that can be enabled at any time. It makes the game more forgiving across the board, and it’s the perfect place to start if you want to ease yourself into the experience. 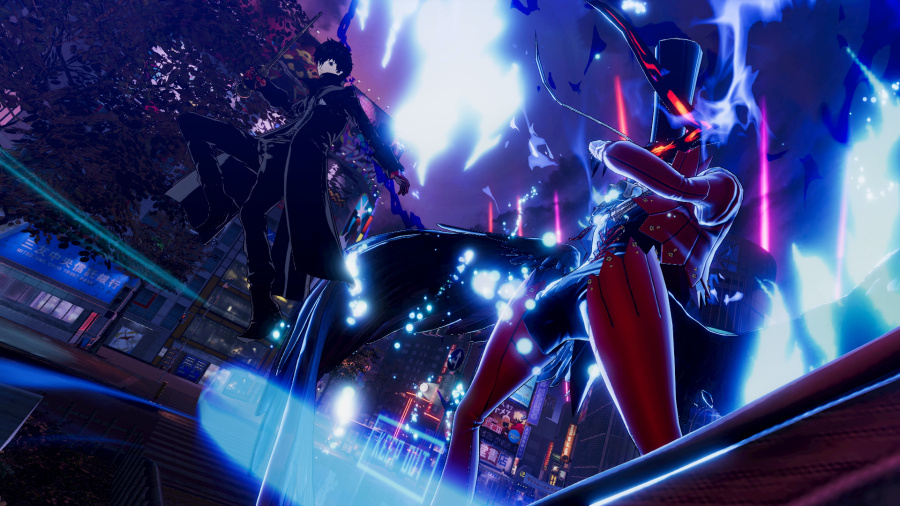 Moving on, Strikers inherits that immense sense of style that helped make Persona 5 so memorable. Menus and other elements of the user interface are immaculately put together, and the game just oozes elegant design. It’s a shame, then, that the in-game graphics can look decidedly rough. Strikers runs at a solid 60 frames-per-second, but the quality of character models and environments has taken an obvious dive — presumably so that the frame-rate doesn’t dip during bigger encounters. It’s not a deal-breaker, but all of the jagged edges and blurred assets are very noticeable on a large TV.

Fortunately, the title’s superb soundtrack is on hand to distract you from the uneven graphics. Strikers reuses a number of songs from Persona 5, but a selection of new music and a number of stunning rock remixes make it all worthwhile. Iconic battle theme ‘Last Surprise’ has been given a spectacular makeover, for example. An instant hit.