Playing Yakuza 3 and beyond for the first time nowadays feels somewhat clumsy, but also worth it for new fans

I first jumped on with the Yakuza series when Yakuza 0 arrived on PC back in 2018. Yakuza 0, acting as a prequel to the rest of the series, is now ostensibly positioned as the best possible starting point for newcomers, especially when paired with Yakuza Kiwami, a remake of the original game that released on PC a year after 0. it was a very natural progression for me to then move onto Kiwami 2 soon after, methodically following Kiryu’s story as his series slowly filtered onto more platforms. A prequel, a remake of the original game, and a remake of its original sequel — so far, incredibly simple and straightforward.

When Yakuza: Like a Dragon (which, importantly, is titled Ryu ga Gotoku 7 in Japan) shook up the formula last year, I convinced myself at the time that a new protagonist and framework for the series would insulate me from any potential knowledge gaps for skipping ahead from the first three, more modern games. Sega‘s decision to globally market Ichiban’s entry as a sort of soft reboot by going in favor of a numberless subtitle remains a contentious one, but for the large part I felt like my decision was validated. I only occasionally felt like I was missing bits of information I was expected to be familiar with. Of course, with several overt narrative references from Yakuzas 3 through 6 clearly missing from my knowledge, I knew I owed it to myself to do right by the series and go back to revisit what I had unceremoniously skipped. When it was finally announced that these remaining entries would make their way over to PC less than two months ago let’s say I knew what I would be playing for the first part of 2021.

Okinawa is a quiet, quaint setting for a Yakuza game that I appreciated.

Of course, if these games had been available on PC (and Xbox) before Like a Dragon’s multi-platform release last year, that would have been more convenient — but I suppose it’s easy to look back with hindsight and ignorance of publishing intricacies and declare what should have been done differently, especially within a year as generally difficult as 2020. Without dwelling on the past, I was eager to see how well Yakuza 3 held up, knowing full well going in that there might be a bit of acclimation required going from 2017’s Kiwami 2 to what is effectively a 2009 PlayStation 3 game.

The transition was admittedly somewhat rough, but in many ways playing Yakuza 3 still manages to feel like a natural carry-over from the glitzier, chronologically-preceding, entries. Story beats from Kiwami 2 are naturally followed up on in the early moments of 3, character models – though more dated- still convey well in the voiced cutscenes and dialogue, and even some of the environments still come through remarkably. It certainly helps to crank up the resolution on PC to 4k and beyond, but after a few hours roaming around Ryukyu and eventually, Kamurocho, I found myself growing accustomed to the more limited capabilities of Yakuza 3’s presentation. At some point, it no longer really registered as a distraction. 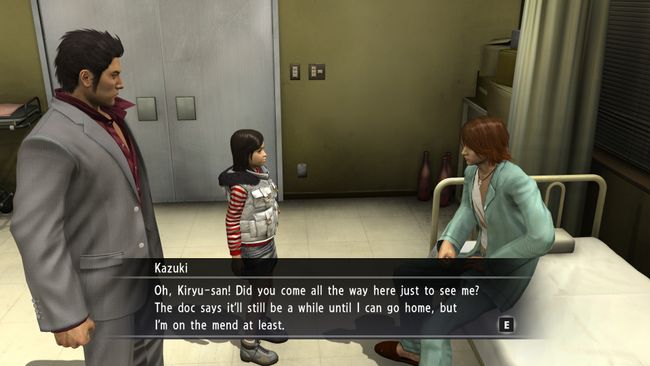 It was comforting to see story threads from prior games show up in the early moments of Yakuza 3.

Where playing Yakuza 3 feels most rough is when it comes to the brawler style combat. A fairly narrow Field of View (that cannot be adjusted from within the game), and very stiff controls made me immediately less eager to go around looking for fights, and try to focus on progressing the main narrative and poking around a few substories. Knowing that I have two additional games on the docket ahead of Yakuza 6’s planned March release is perhaps further incentive to try to get a brisk experience within this trilogy of games. I still find myself eager to engage with the vast majority of wacky characters and situations that I come across, but less eager to spend a ton of time with clunky minigames or really trying to go crazy with the combat itself.

Exploration around town also takes a bit of a hit here. Not only can Kiryu only run at a constant speed without a possibility for sprinting, but the absence of an autosave or menu save is a lacking feature that truly feels a bit obsolete. More than once I found myself wanting to try for a different outcome on an event, only to remember that my last manual save was hours ago. I’m also a bit of a boiled frog when it comes to the convenience of an autosave, and have caught myself nearly exiting out without checking that I had actually saved. In a way it feels a bit nostalgic, I suppose, but perhaps a missed opportunity — especially considering it was specifically added to the PC release of Yakuza Kiwami, so it feels especially absent here. 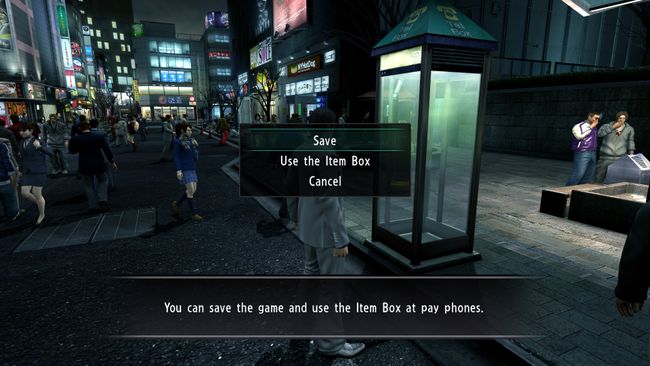 Otherwise, the PC release has been a solid, but not overly remarkable experience for me. Being able to play at 4k and further increase the rendering scale past 100% allows for Yakuza 3 to truly look its best, even though the benefit of pixel-pushing can only go so far. The most glaring limitation comes in the form of a framerate cap. Despite being able to select a refresh rate above 60Hz, my framerate remained capped at 60 regardless of my selections here. I went ahead and set my GPU driver’s frame limiter to this value to get as smooth an experience as possible with this limitation in mind. Additionally, despite setting the Shadows setting to Ultra, there are still moments where specific shadows end up looking very banded and poor compared to the rest of the game 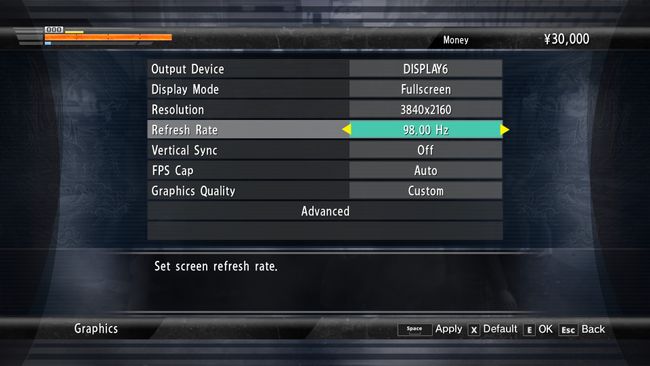 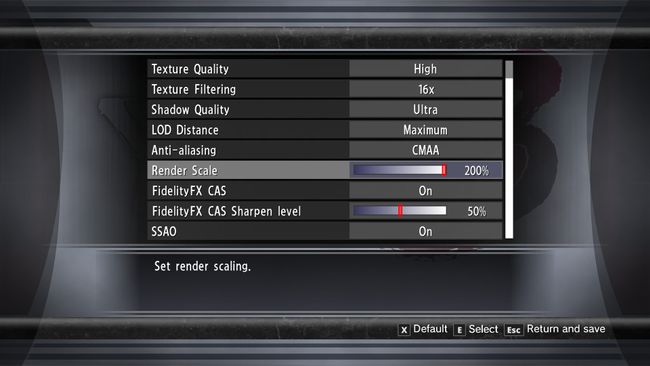 One other specific omission that I found disappointing was the lack of support above 1080p for the offered Windowed and Borderless modes. While higher resolutions are an option in fullscreen, selecting anything else pushes you back down to 1080p. Oddly enough, early testing showed that this is not the case for Yakuza 5.

Lastly and perhaps expected, Yakuza 3 does make some use of prerendered cinematics or cutscenes which are still stuck at their original, lower resolution, and end up looking distractingly blurry when they crop up. It’s not something that bothers me too much having seen similar issues within many remasters of older titles, but can still be somewhat distracting if you’re not expecting them. 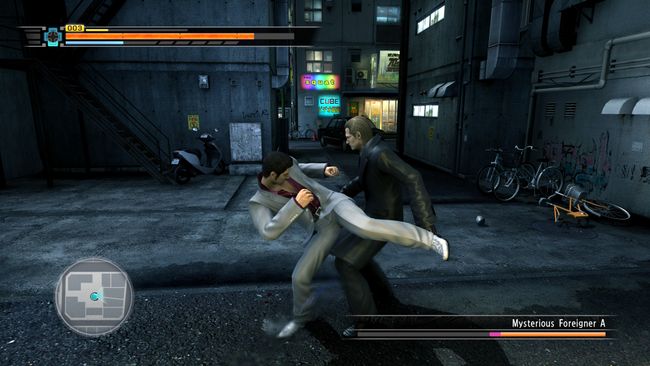 Stiff, clumsy movement and animations during street fights are the toughest things to get used to here.

Despite these caveats and the expected downgrade in overall presentation, I still find myself loving Yakuza 3 for largely the same reasons I’ve enjoyed everything else in the series I had played up until now. In fact, I found myself extra appreciative of the limited scope of the early moments of the game, where the biggest moments of drama are interspersed with simply chasing a stray dog, or participating in an impromptu baseball game with the Orphanage. Yakuza games had always avoided the world-threatening scope that so many games shoot for, especially covered on this website, so it was extra refreshing to see the scale shrunk down even a bit more yet remain compelling in the early moments here.

I can already tell I’m going to deeply appreciate taking the time and pushing through the slight awkwardness of playing a decade-plus old game — and by the time I get to Yakuza 6 this spring it might not feel clumsy at all anymore. As for now, Kamuorcho might not shine quite as bright and solving problems with closed fists maybe not feel quite as slick, but it’s Yakuza all the same and persisting through feels worth it.

Gran Turismo 7 on PS5 to Provide the Best Experience Yet

Gran Turismo 7 on PS5 to Provide the Best Experience Yet