Poll: Which Is Your Favourite GameCube Console Variant?

We recently ran a poll looking at the sexiest consoles Nintendo and the company has put out some mighty fine-lookin’ hardware over the years. There was one system that gets us particularly excited, though — the good ol’ GameCube — and it seems you readers are in agreement judging from the results of that poll.

Yes, the Japan-only Spice Orange variety won the vote by a significant margin, but given that it was the only variant of the standard GameCube to choose from, we thought we should take a look through all the options and find out if orange really is the new black (in the realm of Nintendo hardware, at least).

We ran a similar feature asking your favourite flavour of Nintendo 64, and we have to say the results surprised us a little — the faithful ‘Charcoal’ held its own against the rest of the spectrum and we’re intrigued to find out how the standard purple (sorry, Indigo) GameCube holds up against its peers.

For the sake of brevity, we’re only including GameCube variants that were commercially available to purchase in at least one territory (so no one-off promo pieces or limited run competition prizes). We’ve also culled any versions that were simply a standard colour with the circular disc ‘window’ on top switched out — we’re really interested in the overall livery and, frankly, just swapping in a small ‘faceplate’ on top doesn’t really count, does it? There were several Platinum Silver variants with a different disc window packed in (Donkey Konga, Pokémon XD, Metal Gear Solid), although the Metroid Prime black ‘Cube may have been the most common. If any of these are your favourite, vote for the corresponding colour and let us know in the comments which faceplate you prefer.

So, before we get to the poll (or before we head off in search of rare Japanese disc windows), let’s remind ourselves of the main GameCube variants that anyone with cash money could buy back in the day…

The website Console Variations has a nice round-up of each and every GameCube in existence, including one-off designs, competition pieces (MTV prize consoles, for example), all the disc window variants, and other curios — check those out for the full rundown. Here, we’ll be sticking to the standard versions that hit shop shelves in at least one territory. Nintendo made a statement by making the ‘default’ console — the one it launched with and used in marketing and promotional materials — purple. It certainly stood out from the dull grey-black boxes the competition were selling. At the time, though, the PS2 was the slickest console on the block; a convenient DVD-playing lifestyle addition which also played some pretty amazing video games and appealed to image-conscious teens. Nintendo’s cute purple box — with its chunky handle, tiny discs and kidney-shaped controller buttons — looked like a baby’s toy by comparison.

We’d argue that the bold design of this immensely durable, solid little box has aged better than its rivals, though. If you find a clean example that doesn’t have knocks on any of its eight corners (or an oddly yellowed Slot B door), this is still one of the handsomest consoles ever made in our books. 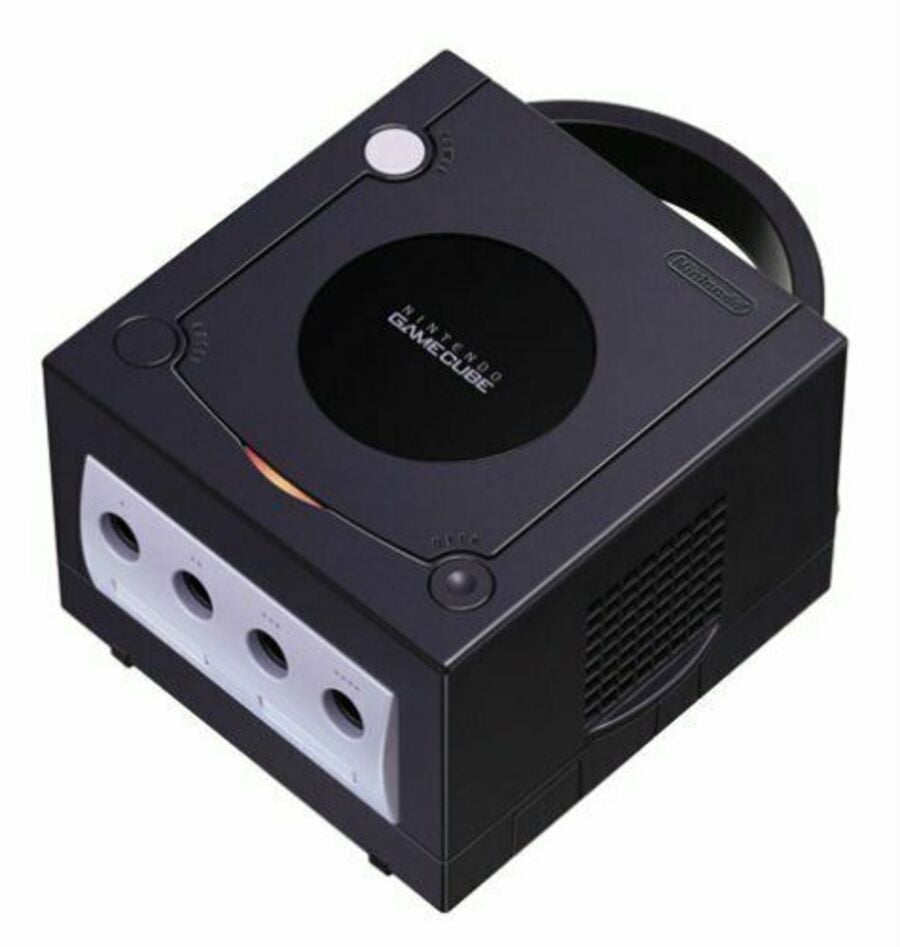 We assume Nintendo went for ‘Jet Black’ to give this some pizazz — ‘Boring Black’ doesn’t have the same ring to it. Still, the black version gave you the option of a hue that wouldn’t attract the nearest three-year-old quite so readily. It looks infinitely better with the orange power light lit up, we reckon. You can’t go wrong with black, right?

When it comes to cars, silver is the bland compromise you make when you want something more exciting than grey, but you’ve also got an eye on resale value. For a games console, though, silver is a tad more risqué. And ‘Platinum Silver’? Well, that’s positively racey.

The Platinum Silver ‘Cube (pictured above with a WaveBird controller and a black Game Boy Player) was repackaged a few times with different disc windows, and a nice clean one is a thing of beauty whatever ‘faceplate’ it’s sporting. This Japanese exclusive was the cause of much jealousy for GameCube aficionados in the West. To this day the Spice Orange GameCube inspires jealous looks and furtive eBay searches amongst fans who never got around to importing one of these lovely creatures.

The Nintendo Life Spice Orange GameCube Club is a five-member group (at last count) of like-minded individuals who gather periodically to Slack chat about all things Spice-y. Is it the best GameCube going? That’s your you to decide, dear readers, but the fact remains that you should join our club. Go on — you know you want to. 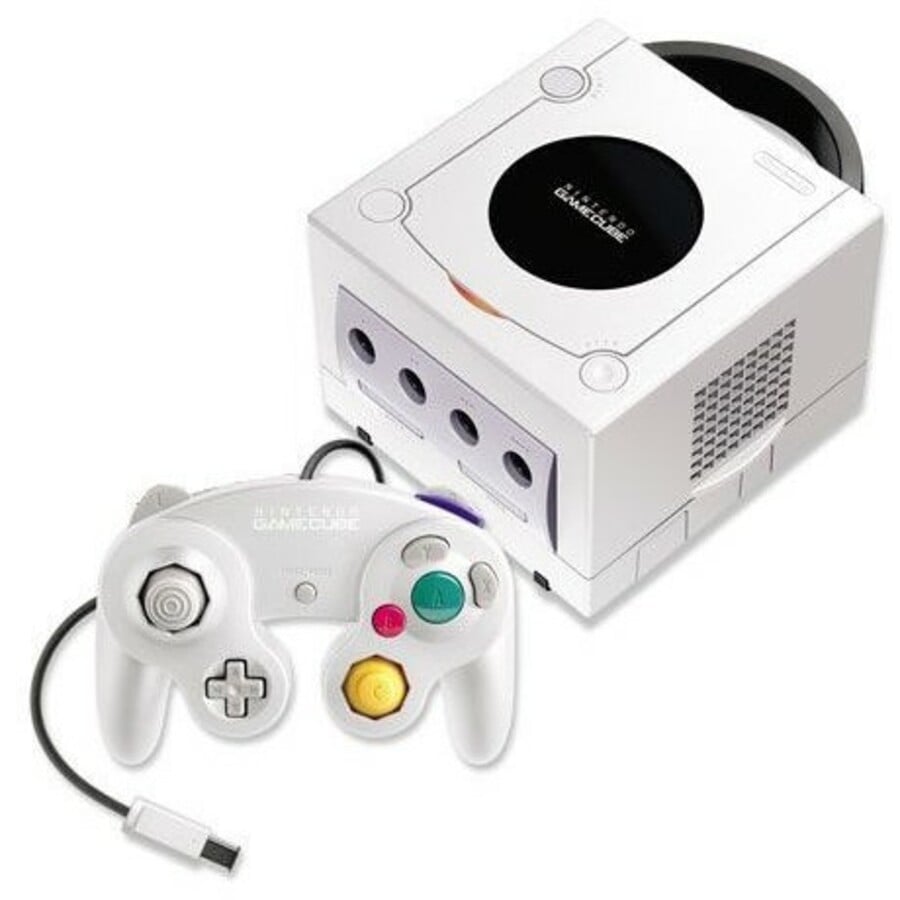 A European-exclusive (see, we do sometimes get nice things!), the Pearl White GameCube is… well, it’s a pearl white GameCube. Not much else to say, really — it’s a lovely thing when it catches the light just so. It also came in a bundle with Mario Smash Football (or Mario Strikers, if you prefer).

Japan also received its own white GameCube — an extremely limited Final Fantasy: Crystal Chronicles version that was actually a different, glossier white and came bundled with a Game Boy Player, too. Apparently, only 150 were ever made, so we’ll mention it here rather than give it its own section. Sensible, no?

A Toys ‘R’ Us exclusive in Japan, it’s a gold GameCube. It’s not spicy, but we still want one.

Resident Evil 4 GameCube. I bought this new on release and it’s pretty much my favourite console I own. I was lucky enough to find a second matching controller a couple of years ago too. #ResidentEvil #ResidentEvil4 #Nintendo #capcom #NintendoGamecube #RETROGAMING #Retro pic.twitter.com/4LLzFXfs4W— Boss (@boss240280) December 24, 2019

A European bundle with Resident Evil 4, at first glance you might think this was a Silver console sitting on a black Game Boy Player, but this one actually combined a silver top with a back bottom. Throw in an RE4 disc window and you’ve got a cool (if lacklustre) console variant. At least the controller got the RE4 logo.

The Tales of Symphonia GameCube

Now we’re really cooking! This pleasant little pastel green/mint console only saw the light of day in Japan and, somewhat oddly, France (although the French bundle didn’t include the Game Boy Player).

Unfortunately, the entire casing is prone to discolouring, much like the controller port plates and memory card doors on all GameCubes. You’ll need a sizeable budget if you want a pristine one, too.

Released in Japan only, this red console came with a slightly darker red Game Boy Player and a Gundam Char figure. There was also a special WaveBird available to complete the set.

Produced to commemorate the Hanshin Tiger’s JBL win in 2003, this Japan-only variant came bundled with a bag and a team shirt. Another console that’s prone to discolouring with age, unfortunately. Nobody wants a console that looks like a baseball shirt covered in baby vomit.

Oh my! Yes, we’ve spoken before of this final Japan-only version. This total hardware revision came courtesy of Panasonic and combined the general functionality of a standard GameCube with some sexy blue highlights around the controller ports, a mirrored face to show off every last fingerprint, and the ability to play DVDs with its full-sized sliding disc tray.

Only the dull, dark grey controller lets the side down. Otherwise, just look at it!

So, we’ve recapped all the major variants, but which ‘Cube is your absolute favourite? Scroll down and let us know in the poll below:

Feel free to let us know below which GameCube(s) you have tucked away — or proudly displayed! — in your retro collection, and which one inspires lustful thoughts.