by thecarboncurve
in Sega Genesis
0 0
0

As I write this, I’m not actually sure what’s running on my Switch; Puyo Puyo Tetris, or Puyo Puyo Tetris 2. There’s almost a comfort to that, knowing that no matter what, a solid puzzle game is, waiting for me when I go get it off my nightstand. That comfort was even felt when I first booted the game, where I immediately launched into a standard 150 line Tetris challenge from the main menu and lost at line 140 due to being tired. There’s a comfort to the game being similar to my experiences to the first game, a comfort to the idea that I know what I’m getting into with a sequel, on some level.

I am not really an expert on Puyo Puyo. I’m not even really a Puyo Puyo player. My first experience with the series was the small Puyo minigame in Project Mirai DX back on the 3DS. But I am at least a big Tetris fan, I could eat Tetris for breakfast, lunch, and dinner. No library of mine is complete without a Tetris game somewhere in it. I find this puts me in an interesting position in comparison to the site’s resident Puyo fanatic, FlareHabanero, to preview, and then eventually review this crossover sequel. I have to save much of my thoughts on PPT2 for the review, but I can at least tell you from playing this game over the past few days that PPT2 is an excellent, polished, and feature-rich package I want to sink more hours into. 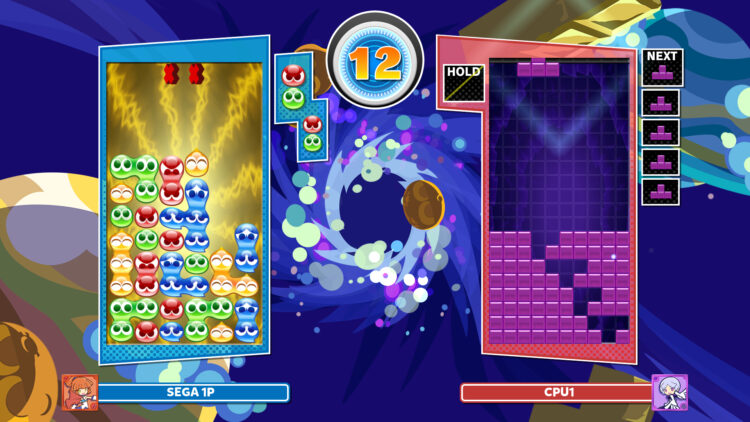 For fans of the first game, there’s a lot here that will be familiar. Every mode from the original returns, and the menu designs and sounds are similar. The store has a lot of the same unlocks from the first, the options menu brings back almost everything and adds a couple new settings, and the vibe I get is that this is more of that greatly polished, well-made puzzle experience from the original title. Everything has been redrawn to a more consistent standard, and there’s quality everywhere. In the game parts of the video game, it’s as tight, responsive, and engaging as the original. I can’t praise the sound design enough in this, it’s so snappy and everything has quick, sharp feedback.

One aspect I’m unable to test—I don’t even know if I’ll be able to test it in time for release—is online multiplayer. The servers just don’t seem to be online yet, and I couldn’t find any games among other previewers. If it is online, I couldn’t find anything. I have heard that there are new balance changes in store for players, including the ability to play online without every match being a Puyo vs. Tetris or a fusion match, where you alternate between the two games. I can tell you that even without having played much of the online from the first game, this is a welcome change, since ‘damage’ in Tetris is a wildly different beast than ‘damage’ in Puyo Puyo, and mixing them together is all kinds of frustrating.

The game’s tone is much the same, though with the silliness turned ever so slightly down. I have no issue with the whimsical tone at all, and it can really help take the sting off of losing or doing poorly. I just think it might be a bit too much in the first game, and detract from the competitive nature. This, I think strikes a better balance, specifically in its music, which tends towards more synths and bass than the slower-paced, more jovial songs of the first game. I feel this a lot in the new rendition of ‘Korobeiniki’, the song most associated with Tetris and that plays during Tetris heavy modes like Marathon. 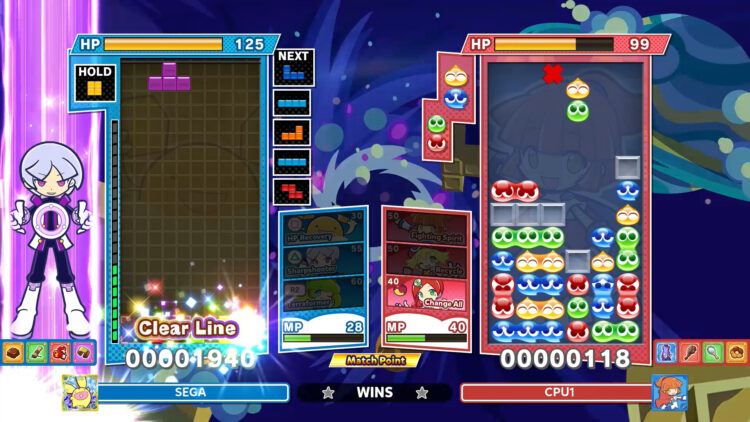 One of the new modes is Skill Battle, a mode that actually makes the fighting game comparisons apt! You have health, special moves to pull at the press of a button, and you build your roster of characters to battle it out with teams of three, one health bar takes all. Starting out, it’s kinda just normal mode with an extra button involved, but as you gain characters, abilities, and experience, it gradually grows more fierce and wild. It’s one of those modes that seems like it’s not doing anything special, but fills itself out very quickly over the course of an hour or so, it’s good fun.

Aesthetically, PPT2 is so far looking to be a more polished version of the original. All of the animations have been redone, a few new styles of graphics are experimented with, and you’re less likely to see the same attack animations in-game as before. There’s something almost universally charming about modern Puyo Puyo’s art style that I adore.

I’ll be honest; I don’t get Puyo Puyo yet. I understand it at the basic level, of creating chains and planning well ahead, but it’s a different speed to Tetris, it’s more methodical. Where in Tetris, you can sorta do things on the fly, Puyo is a game where you have to simultaneously slow down and assess what you have, while also keeping fast so your opponent can’t get ahead of you. There are lessons, which were also a feature of the first game, but they’re completely non-interactive, so it’s difficult for them to really stick. Thankfully, Flare (who would be reviewing this game had his computer not given up the ghost) is assisting in my Puyo game, so I’m not completely in the dark and I’m getting better. Puyo is, like Tetris, a game you get better at by playing it, which I suppose makes it a perfect fit to crossover. It’s just a game with a higher curve than Tetris.

It feels like there’s so much to talk about. I haven’t gotten into Adventure mode, and how there are now two stories explaining the worlds of Puyo Puyo, a world that’s been evolving directly from its early 90’s manga and Dragon Quest-inspired roots, and Tetris, a ‘world’ that has had so many distinct iterations of aesthetic and cohesion that could warrant a discussion all on its own. I haven’t even finished the first story! I was originally going to write some jokey thing about personifications of the T block and Carbuncle, but that would be disrespectful–my impression of this story is that it’s very kid’s show-esque, which I’m not yet sure is my thing or not. I can get down with a fun kid’s comedy, but not if it’s only for kids, you know? So far…it’s not really to my taste. 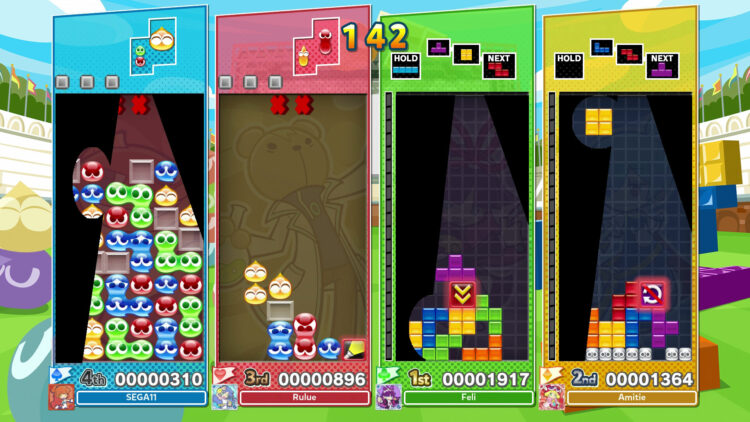 Even without all the deep lore, I see noted improvements to Adventure mode aplenty. I don’t wish to discuss all too much here, partially because I’m not that far in it yet, but I will say the structure has been improved with a new world map. The presentation is still very ‘visual novel’-esque, with new illustrations made to keep the art style more consistent and characters on-model. The English dubbing also seems to have been given more concise direction and where I thought it was kind of annoying the first time, I find the voices this time to be more engaging.

There’s a distinct comfort in this game. I don’t play a lot of games that are iterative, not so much out of disdain, more out of coincidence. I’ve never picked up yearly release type games, so seeing Puyo Puyo Tetris 2 be so familiar is almost a relief. I know what I’m getting into, and you know…that’s pretty nice sometime.

Hopefully, you’ll feel the same comfort when you get to play it yourself! In the meantime, Puyo Puyo Tetris 2 launches on December 8th for PlayStation 4, Xbox One, Xbox Series X|S, Nintendo Switch, as well as PlayStation 5 later in the holidays, and a Windows via Steam release coming later in 2021.

Theatrhythm: Final Bar Line is getting a free demo on February 1

Theatrhythm: Final Bar Line is getting a free demo on February 1