Random: Have You Spotted The Tiny Typo Nintendo Missed In The Latest Switch Update?

It’s always risky pointing out typos in other people’s work — goodness knows enough tiny errors slip through this writer’s net. Still, typos tend to stick out like a sore thumb when you find one some place unexpected. The internet is full of them, but they really catch your eye when you’re away from your PC or phone; at an ATM, for example, or painted on a road sign. Or popping up on your Switch‘s menu screen.

We spotted one such minor mistake buried in Switch’s menus recently, and it jumped out at us because… well, Nintendo are usually super hot on this sort of thing. We don’t remember seeing a typo on one of their console’s menus ever before. It’s a tiny thing and we assumed it would disappear with the following update, anyway. No biggy.

Well, Switch firmware update 11.0.1 dropped today and corrected a host of small problems… but that pesky typo is still there! (Note. It’s been pointed out by readers ninten90 and HADAA that the American English versions of the menu below feature entirely different text to our European version, so it appears that Nintendo of Europe — not NoA — may have slipped up here!)

But where!? we hear you cry. Well, we only caught it while putting together our guide explaining how to transfer screenshots and videos from Switch to a smartphone, PC or Mac (a new feature that debuted at the beginning of December with update 11.0.0). Selecting any image and choosing ‘Send to Smart Device’ brings up the option to ‘Send Individually’ or ‘Send Multiple’…

At least that’s what it should say. Instead the ‘L’ and the ‘T’ have switched places to read ‘Send Mutliple’: 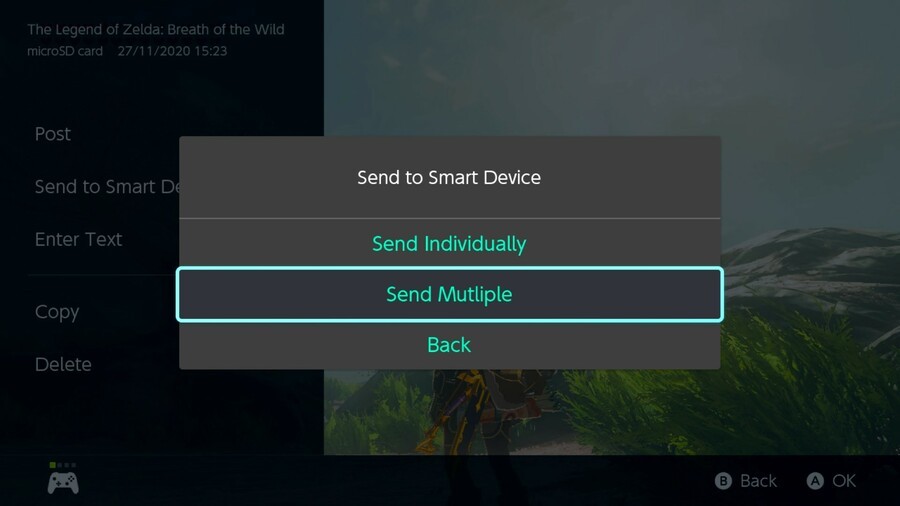 In fact, Nintendo might have just been having an ‘off’ week because our friends over at Switch Weekly spotted another spelling mistake on a Switch promo recently. How many times have we all typed ‘Nintnedo’ by mistake?

Oops. Nintnedo of America with the typo. We’ve all been there. 😬 pic.twitter.com/VOkIIHe9qK— Switch Weekly 🟥 (@SwitchWeekly) December 4, 2020

Pot, kettle, black? No arguments there. Maybe we’ve just been sending too many gorgeous Breath of the Wild images to our PC’s Wallpaper folder and we’ve seen ‘Mutliple’ so much it’s burned into our minds. It’s far better Nintendo concentrates on fixing the important stuff with firmware updates, yet for some reason we’re fixated on this most insignificant of errors!

We totally understand, Nintendo. It’s been a very long year.

Do you get unreasonably wound up over typos? Can you remember seeing anything like this on any other console? Let us know below, and be gentle — it happens to the best of us!

Forspoken: PC performance and the best settings to use

Forspoken: PC performance and the best settings to use