You’ve probably never heard of Team Ladybug – but if you’re a fan of metroidvanias? There’s a fairly good shot that you’re familiar with at least one of their games. The excellent Touhou: Luna Nights offered a frenetic bullethell-infused romp; and for Atlus fans, Shin Megami Tensei: Synchronicity Prologue – a spiritual Jack Bros. sequel that released as marketing for the Japanese release of Shin Megami Tensei: Strange Journey Redux – came filled with a ton of charm as well. It’s fair to say that Team Ladybug and their evolving Mogura engine have continued to hone their craft over the years.

Booting up Record of Lodoss War – Deedlit in Wonder Labyrinth, the game fits like a glove. While certain aspects of its design apes other games – both from Ladybug’s own catalog, as well as some obvious inspirations from gaming’s classics – Wonder Labyrinth more than manages to carve out its own identity. Very early into the game, players will discover the game’s main conceit – an Ikaruga styled color-shifting mechanic, where players will become impervious to attacks and obstacles featuring the same color.

The other main mechanic used for both combat and puzzle-solving is Deedlit’s secondary weapon – her bow. Not only does it offer players a means of ranged attack, but both the ability to ricochet your arrows off of certain walls and magnets that can influence their trajectory, lead to engaging uses for puzzle-solving. These puzzles do manage to lose their luster the further into the game you proceed, however. Despite the fact you’ll always have a bow, generally, combat is a melee affair – while you do gain access to a handful of ranged weapons Deedlit can use, like a Boomerang, or a Shuriken – the vast majority of her arsenal is made up of swords, axes, and spears. There’s a lot of variety on display here regardless, offering players plenty of wiggle room to tackle combat in a manner of their choosing.

While the game as a whole is absolutely gorgeous, I’d say that much of the visual variety in the game’s locations is lacking. Clearly, the game takes place in one singular maze, limiting how some of the areas could be presented, but I still found myself disappointed. I think the biggest takeaway I had from everything was a total lack of landmarks. You’ve got a handful of tiles on the map that house something unique, like Woodchuck’s gambling den, or the Target Practice; but they’re the exception rather than the rule. What makes this all the more disappointing is the gorgeous fluidity of the game’s spritework. It’s always been Team Ladybug’s strong suit, but Deedlit in Wonder Labyrinth more than delivers on the legacy in spades. From the dozens of unique attack animations for every weapon, the unique flavor of the enemies, down to the lovingly rendered animations for Deedlit’s constantly growing repertoire of movement abilities. It’s impossible to wipe the smirk off your face when it all comes together.

Deedlit in Wonder Labyrinth is a short game, and some of its best mechanics felt underutilized by the time the credits rolled. While Touhou Luna Nights kept experimenting with the applications you could manage with slowing down and stopping time, it feels like Ladybug only ever manage to scratch the surface of what they could have done with Deedlit’s own abilities. Boss battles are a ton of fun, but a couple of them are re-used with a few additional attacks – and much like with the puzzles, it feels like the game never quite manages to integrate its mechanics as well as it could have.

The most that combat ever really differentiates itself from Ladybug’s previous games, is in the elemental weaknesses system. While Fire and Wind are your primary attack elements, secondary weapons and spells can deal other elements of damage – such as Water, Light, Darkness, and Earth. Sometimes enemies (or especially bosses) might be particularly weak to a specific element that isn’t a part of your kit by default. Spells, which you can find scattered throughout the game world, offer a chance to more easily defeat bosses that are weak to the element in question. 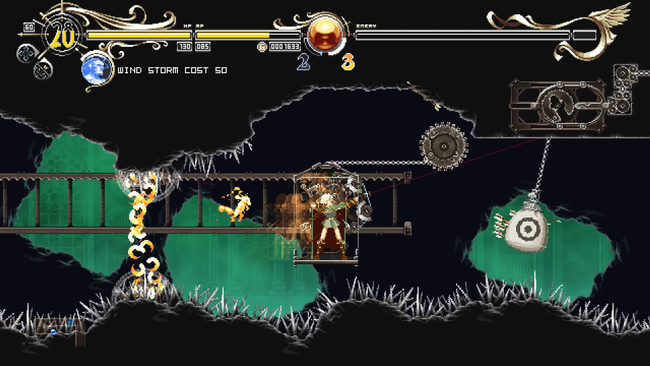 That’s great, and it means that most players will have no trouble finishing Deedlit in Wonder Labyrinth – but it does make the game’s short runtime feel all the shorter when players can bumrush bosses in seconds, assuming they have the right spell for the job. Even with the handicap of abstaining from using these spells, the game never feels like it bares its fangs. Dealing damage to bosses and defeating enemies will level up whichever spirit you currently have inactive. Leveling up a spirit increases your attack power whenever you shift to them, and when you have a Level 3 spirit activated you will automatically regain health over time. Getting hit doesn’t mean as much when you can recover from it so quickly.

At the end of the day, Deedlit in Wonder Labyrinth isn’t a bad game, but it’s undoubtedly Team Ladybug’s weakest work. Even the weakest from their output is well worth playing, but unlike with Touhou: Luna Nights I wouldn’t go out of your way to make time for it. Maybe some of the game’s faults, like its uneven difficulty, can be alleviated with updates. Even then, other problems just run too deep; hopefully the team can stick the landing with whatever their next project ends up being.