Does anyone else do that thing where something getting added to a streaming service makes you more likely to go back to it? When Battlestar Galactica was added to Netflix, I rewatched it in full, despite the fact that I’d had a complete blu-ray box set on a shelf mere meters away for years prior. Thanks to Xbox Game Pass, the same phenomenon is now emerging for me in video games – and that’s how I ended up returning to Final Fantasy VIII over the holiday.

FF8 is now in Xbox Game Pass on both PC and Xbox, and so I spent a fair chunk of my holiday downtime using the new uber-powerful Xbox Series X to… play a game that’s two-decades-old. It was an interesting experience, however, and it led me to something of a revelation. Here goes–

Don’t get me wrong – FF7 Remake is still excellent, and pleasantly surprised me. I was one of those people who always argued a remake wasn’t needed at all (the original is, after all, a masterpiece) – and so I surprised myself by being in support of its place as a winner in RPG Site’s Best of 2020 awards. It topped the 2020 readers’ choice awards, which thousands of you voted on, too. But when I think about a potential FF8 Remake, the mind boggles with the possibilities.

My reasoning is pretty simple: every which way you turn in FF8, the game is straining at the seams of what was possible at the time.

When you compare FF8 to its direct peers, the difference is profound. Final Fantasy 7 is a mish-mash of ideas both visual and mechanical – anything that they could make work got tossed in. The result is a texturally uneven experience, but that rocky exterior is also what makes FF7 so wonderful and so immediately recognizable. Few forget the glorious dissonance of moving from gut-punch grief to a rad snowboarding mini-game in the space of around twenty minutes. Importantly, everything they chose to throw into this cocktail is something that works, giving it a pleasant taste but, to continue the metaphor, a high alcohol content. FF7 always knows exactly how far it can be stretched, and never goes too far.

Final Fantasy IX is in many ways a distillation of that energy. It is the work of a development team that has mastered the style and language of the new era of Final Fantasy, polishing everything about it, except the battle speed, to a fine sheen. Some of the more outlandish ideas and more significant bumps in the road are removed, for the sake of elegance. There is no wastage in FF9; it is gourmet. You sit down at a fine restaurant and get not the biggest meal, but the tastiest, presented beautifully. 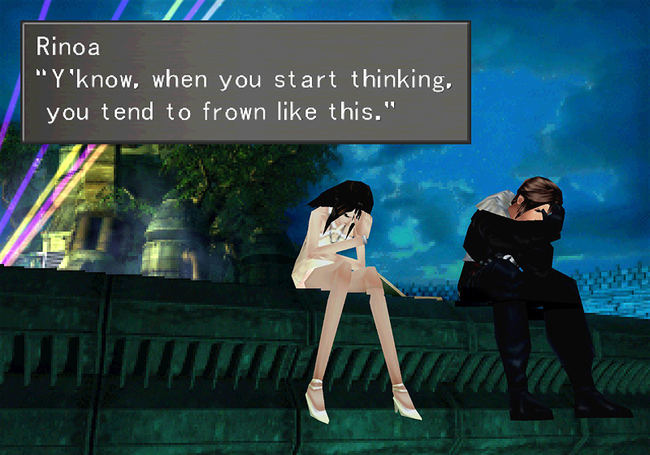 Final Fantasy VIII is gloriously unlike either of these. With Squall’s adventure you have an emboldened Square once again trying pretty much whatever they can think of – but with a glorious lack of awareness of what might actually be possible. I can picture the FF8 planning meetings with startling clarity. “Too ambitious? We just made Final Fantasy VII. There’s no such thing as too ambitious!”

It’s from this that you get FF8’s bizarre mix of fantasy and reality that in many ways would become defining for many latter entries. You also get RPG systems so fabulously, ruinously broken that breaking them practically becomes the game’s primary goal. There are set pieces that stretch what was possible with a mix of CG and 1999 real-time graphics to breaking point, and, of course, there’s a story that seems to want to pull in about twenty different directions, often to its detriment. That’s putting it mildly, to be honest. FF8’s story is often a hot mess, but it is nevertheless a glorious, compelling hot mess with a particularly relatable lead.

The seeds of certain story revelations and character traits are almost always laid in this story, but often so subtly and so in passing that they are barely recognized, leading to the impression that FF8 is a convoluted mess. In places, it is that, in honored time travel story tradition. In others, however, it feels ripe for expansion, like its team’s wealth of ideas could not actually be squeezed into a PlayStation game already one whole disc longer than its predecessor.

I replayed FF8 in the way only an experienced player can – following things like this very site’s Triple Triad guide and min-maxing to get ultimate weapons on disc 1. But as I played, and as I wound towards some of its most ridiculous twists, I couldn’t help but feel like this game, more than FF7, would’ve benefited from the exhaustive narrative, mechanical and visual elongation that its predecessor is undergoing in the multi-part remake series.

FF8 is ambitious, impressive, and in many ways half-baked. It has too much going on, a victim of its own ambition. It is without a doubt a more flawed game than either FF7 or FF9, but is also brimming with potential that could so easily be realized in a remake. Where the original FFs 7 and 9 feel complete, whole and untouchable – something even a great remake cannot assail – it feels as though the world and characters of FF8 have more left to give. Looking at it now, with what has been done in the remake of the first act of FF7’s story in the rearview mirror, one can easily see how vastly it would benefit from similar treatment.