The House of Dead, but with high schoolers. Time Crisis, but with teens. However one might try and describe it, there’s no getting around the fact that Gal Gun Returns is a very niche title – in a nutshell, it’s a rail shooter/dating-sim hybrid where you play as a high-school boy who must fend off swarms of desiring anime girls, all while pursuing the love interest of your choice. If that description makes you feel uncomfortable, then this game is decidedly not for you – but for those looking for a lighthearted, promiscuous romp through a Japanese high school, Gal Gun Returns is a competent but unremarkable experience.

The Gal Gun franchise has obtained a reputation in the industry for being one of the more blatantly sexualized anime-stylized games to leave Japan and reach western audiences. Gal Gun Returns is a remaster of the original game, which was never localized outside of Japan until this release despite both of its sequels obtaining releases overseas. And a quick glance at the game’s marketing should reveal why Microsoft recently cancelled the Xbox release for this game: it’s filled with underage high school girls wearing bikinis and skirts who the player has to shoot with a “pheromone gun” in order to proceed.

Yes, you read that right – a pheromone gun. See, at the start of Gal Gun Returns, the game’s protagonist Tenzou is visited by an angel-in-training who tries to shoot him with a cupid’s arrow so he can finally fall in love with one of the students at his school. Unfortunately, that angel accidently shoots Tenzou way too many times, instead causing every girl in his high school to immediately become obsessed with him. This pheromone gun is the only way Tenzou can defend himself from the ladies.

And let me tell you – these girls are relentless. I was only partially kidding when I referenced The House of Dead at the beginning of this review. These girls will hunt Tenzou from the shadows, swarm him from doorways and windows, pop up from behind desks and lockers one by one. They will drop from trees. They will climb over any number of obstacles large or small to try and deliver Tenzou a love letter or to proclaim their longing to him. It truly is a special kind of terrifying to experience a blue-haired anime girl in a swimsuit popping into existence inches away from your face and yelling at you in Japanese.

I do feel that it’s important to clarify that while this game inarguably objectifies underage girls in a way that is highly abnormal outside of Japan, I never really felt a strong sense that the lewdness present here is aimed at titillation. Really, the story in Gal Gun Returns seems to try and lean into the absurd comedy of the “harem” anime tropes, in which the entire narrative focuses around a male character being bombarded by girls who literally cannot keep themselves off of him. The inherent absurdity of the whole situation feels like it’s moreso meant as a form of surreal comedy, in this case. That’s not to say that the game won’t still make many people uncomfortable, because it very well will, but I think the game’s marketing places more of an emphasis on the lewdness of Gal Gun than the game itself does. It also makes it challenging to take a nuanced critical view of a game which really could not be any less interested in somehow grounding what is a patently ridiculous premise.

In order to fend off the literal hordes of girls, it’s the player’s job to guide Tenzou through the classrooms, hallways and athletic facilities of his high school in a series of on-rails first-person shooting segments. Hitting the girls with pheromone shots causes them to literally crumble to the ground in ecstasy, allowing Tenzou to proceed to the next area. There is basically zero strategy involved to this – you point and shoot. Sometimes the girls will fall in a single shot if you manage to target some of their more – ahem – sensitive areas – but the effectiveness of doing so seemed mostly down to chance to me. It also doesn’t help that the environments themselves are bland and lack any form of interaction – once you’ve played through one of these levels, you’ve basically played through all of them. 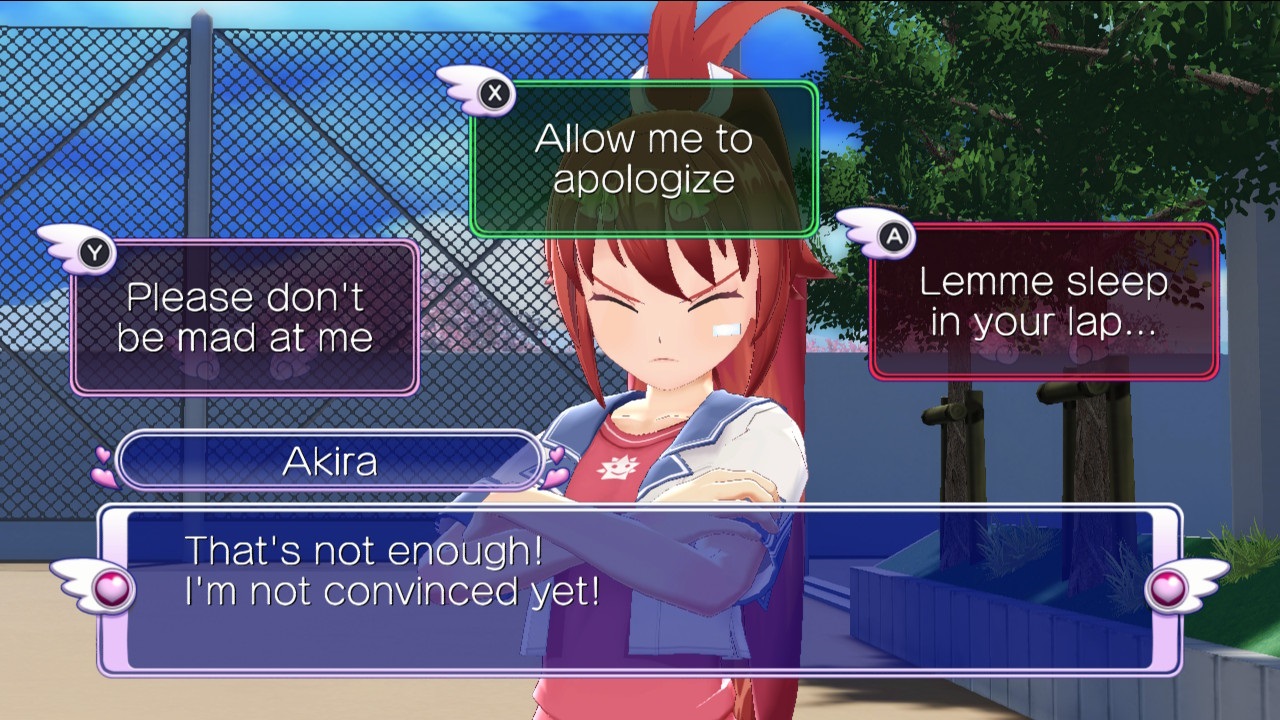 Scoring enough points in these shooting segments also allows the player to enter a special side mode called “Doki-Doki” mode, which frankly makes me feel awkward even attempting to describe. Essentially, this mode transports Tenzou and whatever girl he is targeting into a timed challenge mode where the goal is to raise the girl’s “pleasure meter” by shooting her with pheromones from every angle. And I mean every angle.

It’s probably the mode that has caused the greatest amount of controversy for this series over the years, and lewdness aside, I’m not really sure what the real point of it is, as these gameplay sections interrupt the flow of the shooting levels and didn’t elicit any feelings of fun or engagement in me. I don’t think the game would really have lost anything of value had it been cut.

The other main component of this game is its dating sim portions. At the start of the story mode, the player takes a brief personality test and then selects from one of four love interests to pursue. Each of the four characters has a different personality and set of interests; for my first playthrough, I chose to have Tenzou pursue the athletic and strong-headed Aoi. The other characters fall into common Japanese character archetypes – the old childhood friend/girl-next-door; the timid, booksmart student; the bubbly, ditzy popstar. You’ll interact frequently with whoever you choose, and how you talk to them will affect whether or not they will fall for you by the end of the game. 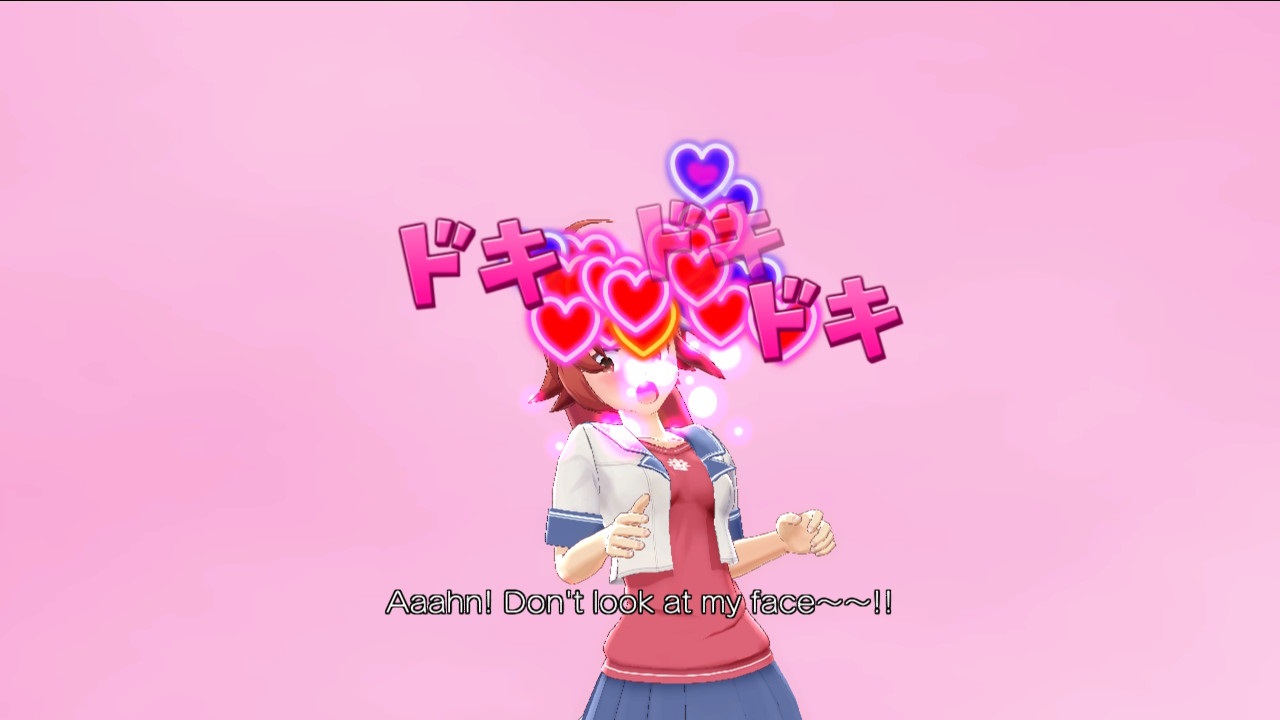 Ultimately, succeeding in the Gal Gun’s relationship mechanic boils down to just picking whatever dialogue option seems least likely to piss off the girl you’re trying to woo. There’s usually one or two responses that seem obviously like the better choices, followed by a third option that is blatantly creepy and will almost always make the girls angry at you. None of the characters have any depth or nuance to them, but that’s not really the point – and I actually found the writing to be pretty funny from time to time.

Which is good, because the rest of the gameplay in Gal Gun Returns didn’t really hook me. Again, by the time you’ve finished the first chapter, you’ll have pretty much experienced all that the game has to offer. Fortunately, a single playthrough of the story mode won’t take you longer than two or three hours. There is quite a bit of replayability to the game, if you choose to play through the other three potential romance routes – these completely mix up the progression of the story, and each route has a few unique locations and minigames. Beyond that, there’s a score attack mode and an additional Doki-Doki mode, but not much else.

The game looks good graphically, although it lacks the detailed environments of the last game in the series, Gal Gun 2. The character models, however, are excellent in detail and are very well animated. The game is quite polished technically and ran without a hitch for me in both docked and handheld mode – Inti Creates did a good job bringing this 10-year-old game into the modern era.

Gal Gun Returns is a hard game to recommend to the masses – partially due to its risqué content, and partially because of its uninspired mechanics. It’s repetitive, brief, and mechanically shallow. But it’s not entirely without merit – the writing can be funny at times, the dating-sim portions can be entertaining, and the absurd premise is morbidly fascinating for those who enjoy anime tropes in their media. If you’re able to turn your brain off for a while and ignore some of the uncomfortable sexual undertones, there may be something in Gal Gun Returns for you to enjoy.