If you’ve ever longed to control a pair of sentient taiko drums and fight alongside Marie Antoinette to prevent the space-time continuum from collapsing on itself, then the Taiko no Tatsujin: Rhythmic Adventure games were custom-made for you. Once exclusive to the 3DS in Japan, Bandai Namco has now brought its role playing taiko adventures to the west for the first time. Taiko rhythm gameplay and RPG mechanics might seem like an odd blend at first blush, so a major question naturally arises: are these roleplaying spinoffs an offbeat adventure, or do they stick to a solid rhythm? Let’s strike up a drum line and find out.

Despite being two separate games, both entries in Taiko no Tatsujin: Rhythmic Adventure Pack follow the same general formula for their stories and gameplay. You control two heroic taiko drums, Don and Kah, who find themselves unwittingly roped into time-traveling quests to save the world from existential threats. You’ll face evil scientists and time-traveling dragon lords as you travel through historic locations like Ancient Greece, Enlightenment France, and feudal Japan. It’s a very functional story that gets the job done – it doesn’t offer much by way of character development or engaging dialogue, but for a simple RPG about living drums, it keeps things moving along.

However, the story still feels like a missed opportunity here. While it would be unfair to expect a masterwork of storytelling from this kind of game, the dialogue could have gone a lot further to offer likeable characters, silly situations, or at the very least, a more lighthearted attitude. As it is, though, most of the dialogue is preoccupied with dry exposition and explanation, which feels unfitting for a game with such a silly premise. The writing is a minor complaint in the grand scheme of things – at the very least, it never gets old to encounter historic figures and rope them into saving the world with you and your merry musical crew.

Rhythmic Adventure 1 and 2 both feature highly similar gameplay loops. Like any RPG, you’ll spend most of your time in and out of battles. Upon encountering an enemy from the simple top-down overworld maps, you’ll be whisked away to a battle screen where you see musical notes stream along below you. You’ll have to press each note’s corresponding button according to the rhythm of the music in the background, and if you can hit many notes in a row, your party will attack. If you miss too many notes, however, your opponents will strike instead. Some characters will attack after only a few notes, whereas other will require larger combos before striking a blow. You can also trigger special moves after maintaining high combos, which can have powerful effects like boosting your stats, healing your party, or taking a large chunk out of your enemies’ health bars.

This combat system might be simple, but that’s exactly what makes it so satisfying. It’s an ingenious method of marrying traditional rhythm gameplay with elements of roleplaying battles, pleasing fans of both genres without ever getting too convoluted. It also strikes a nice level of variety, as battles tend to move along at a brisk pace and your party always evolves with enemy monsters joining your cause. Many defeated enemies will offer to join your party after battles, and although there’s not a lot to differentiate one monster from another, seeing new faces join your party helps keep things fresh. It’s all the better when cameo characters like Felynes from the Monster Hunter series end up joining your roster. Between the fun rhythm battles and the constant stream of new characters, Taiko no Tatsujin: Rhythmic Adventure 1 and 2 manage to keep battles exciting and walk the fine line between RPG and music game, without leaning too hard into either of them. 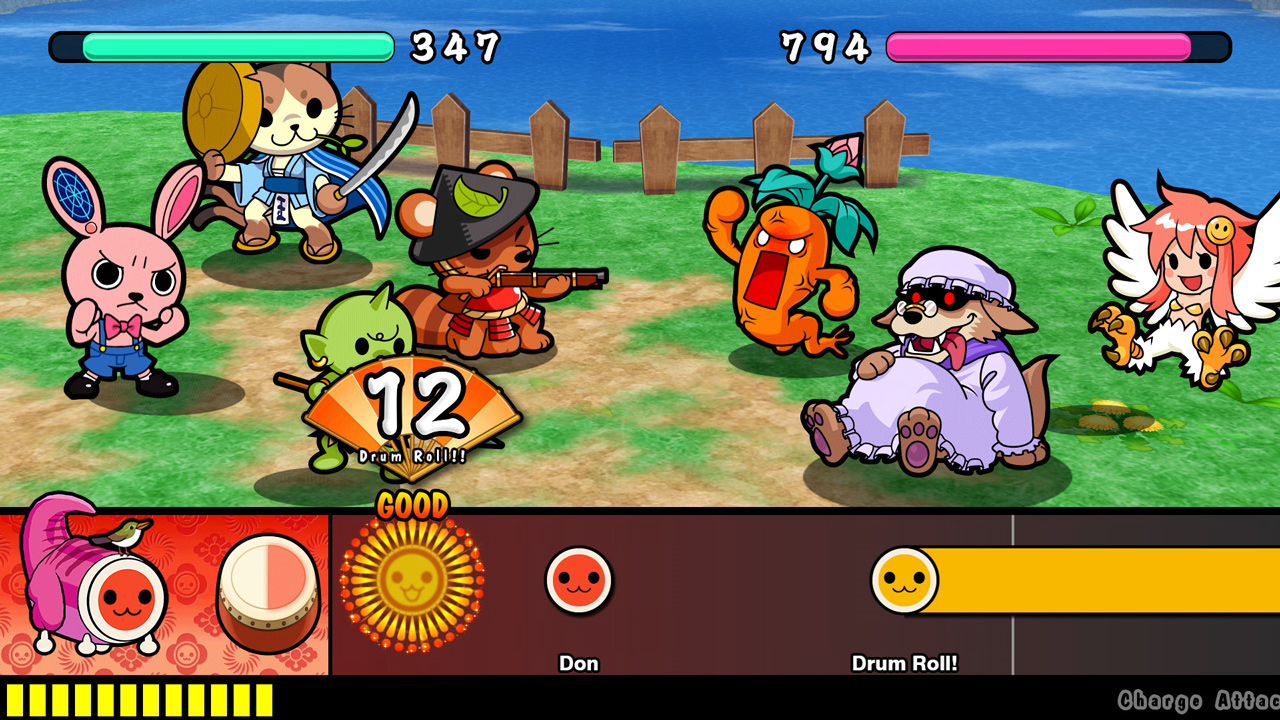 Of course, combat isn’t the only thing you’ll do on your rhythmic adventure. You’ll also explore full-fledged overworlds, villages, and dungeons, complete with NPCs to meet, puzzles to solve, and treasures to find. By RPG standards, the exploration is extremely basic: maps tend to be small and linear, while puzzles are incredibly simplistic and NPCs rarely have much to say. However, while it might not be a huge attraction on its own, exploring the world offers a nice interim between constant battles.

The overworld is where some of the differences between these two games start to arise. The first entry is the most simplistic of the duo, and it shows in some unfortunate ways. Its overworld is rife with random encounters, meaning that you can rarely go a few steps without suddenly encountering an enemy. With such a high encounter rate, it’s tough to go very far in the overworld before the pace is completely broken up by a random encounter. Battles might not last very long, but random encounters remain jarring nonetheless. Thankfully, the sequel does away with random encounters altogether and allows you to see enemies on the overworld before they strike. You’re even able to prevent enemies from attacking altogether, so Rhythmic Adventure 2 feels like the more modern of the bunch.

The second game is also more mechanically robust. Whereas the original limits you to a party of four, the sequel allows you to have a roster of up to nine characters at once on the battlefield. However, you typically won’t be able to fill every slot, as most characters will take up a certain amount of space in the party. This party lineup structure adds an element of strategy that was absent in the party makeup of the original, forcing you to really assess who you want in your party and develop a firm strategy for your lineup. The sequel adds even more elements to the gameplay, such as additional abilities, new status boosts, more upgrades, and even a character combination feature. It takes the solid gameplay loop of the original and wraps it in additional layers of depth and strategy that will please those looking for more strategy in their games.

Even if one game is more robust than the other, there’s something to love about both titles in this collection. The simple charm of the original Rhythmic Adventure will please those who want the Taiko gameplay they know and love, wrapped in storytelling, light puzzle solving, and exploration. Meanwhile, those looking for deeper strategy and roleplaying elements will enjoy the layers of depth present in the sequel. Both games provide a decent amount of content as well, requiring about 10 hours each to see the credits with some encouragement to revisit old areas to discover new treasures and other secrets.

While the story mode is certainly the main attraction to Taiko no Tatsujin: Rhythmic Adventure Pack, it’s not the only thing available. There’s also a tried-and-true music mode, which allows you to go through a lineup of over one hundred songs and drum along to them without having to worry about the story content. There are some amazing selections here, picked from J-pop, anime, and of course, Japanese games – even including some tunes from Nintendo itself. Some of these themes are lifted wholesale from their original versions while some are re-arranged – and in any case, they all sound amazing and feel great to play along with.

And of course, it wouldn’t be Taiko no Tatsujin without bright colors and absolutely infectious cheer. Taiko is a colorful game and it’s proud of it: characters are drawn in a cutesy cartoon style, and of course, its signature taiko drums can be decked out in dozens of outfits that can be gathered either in the story campaign or in the regular music mode. There’s nothing quite like dressing your drum in a bridal gown, pilot outfit, or samurai armor, after all. It’s this bubbly personality and sense of silly fun that really buoys the package from start to finish.

Taiko no Tatsujin: Rhythmic Adventure Pack’s western debut cleverly blends tried-and-true taiko gameplay mechanics with RPG elements to create an intoxicating blend that will delight taiko and RPG fans alike. This charming bundle might be far from the most elaborate RPGs on the market, and if you’re looking for well-developed characters or engaging dialogue, you should look elsewhere. But for simple fun where you can go on an enjoyable musical tour of history with addictive musical battles, then these Rhythmic Adventures are sure to drum up enough interest.