“You can’t stand in the way of progress” is a favored motto of your resident capitalist, and no company knows that better than Endron, the energy corporation currently sucking the life force directly out of our dying planet. But this ecological matter goes far beyond your average Wall St. executive’s portfolio. The greed, recklessness, and inconsideration of this particular conglomerate are far more frightening, going beyond the bottom line.

Endron is one of the many humanistic fronts for The Wyrm, a terrifying spiritual entity that greedily drains civilizations of their very life force, leaving behind inhospitable husks, destroyed wilderness, and millions of broken lives. While the snake suits and shark smiles of its executives are avaricious enough, at its heart The Wyrm is a more ancient and primeval force, one that has currently focused its endless thirst on the greenery of Washington State woodland Tarker’s Mill.

Hope is not lost, however, as Tarker’s Mill is home to a pack of equally ancient, but far more noble Garou: men and women born of man, wolf, and spirit. The Warriors of Gaia. The werewolves. While the outside world merely sees another case of Endron’s inhumanity visited upon Mother Earth, the Garou are more attuned to The Wyrm’s machinations, vowing to stop the evil spirit from destroying their homeland, their people, and the planet itself.

Based on White Wolf Publishing’s famed World of Darkness tabletop series (the same franchise that brings us Vampire: The Masquerade), Werewolf: The Apocalypse – Earthblood tells the tale of veteran Garou Cahal, forced into self-exile after his rage gets the better of him, resulting in a devastating tragedy for his pack (or “Caern”). Working as a mercenary for hire, Cahal is forced to return to his allies at Tarker’s Mill after the suffocating presence of Endron grows, resulting in the death of several friends and allies. At the request of his brother and pack leader Rodko, his estranged daughter Aedrena, and the Caern’s Guardian Spirit, Yfer, Cahal returns to his tribe in a do-or-die effort to force both Endron and The Wyrm from their land.

To achieve this end, Chalal and the Caern team up with militant environmental activists Lambda Mankind, embarking on a series of dangerous sabotage missions in order to disrupt Endron’s desecration. These missions require Cahal to infiltrate and destroy numerous Endron outposts, fracking sites, oil fields, and laboratories. Able to shapeshift between human (“Homid”) and wolf (“Lupus”) form at will, Cahal’s Fianna skills aid his access into these high-security locales, while his penchant for head-munching will come in handy for tackling Endron’s well-armed, chemically endowed employees.

Unfortunately, what this translates to from a gaming standpoint, is around 10 to 12 hours of the exact same stealth mission, as players guide Cahal through near-identical locations, crawling through vent after vent, turning off cameras, opening doors, and pushing button after button, after button, after button. Seriously, there are a lot of buttons.

While it’s accurate to describe Earthblood as a stealth-action adventure, there is a staggering disconnect between the Stealth and the Action. The stealth sections are extremely rudimentary, lacking the tension, finesse, skill, and open-ended nature of a Hitman. In fact, Earthblood harkens back to some of the weaker examples of the genre (remember Velvet Assassin?) with unreliable AI, repetitive motion, and unrealistic room layouts that depict Endron as a building built specifically for stealth infiltration purposes. While this old-fashioned approach could be forgiven if missions were varied or engaging, Earthblood essentially consists of a singular, near-identical missions, played out across strikingly familiar locations. The annihilation of Endron boils down to creeping through warehouse after warehouse, removing fuses, and hacking computer terminals.

On a positive note, it should be stated that playing in Cahal’s Lupus form is supremely enjoyable. One only wishes for more interesting locations to traverse, offering more verticality, less linearity. Regardless, The Good Boy is swift, nimble, nicely animated, and even comes equipped with a “bark” button. Playing as the wolf remains one of Earthblood’s highlights throughout the adventure.

Eventually, whether through player error, stumbling AI, or narrative structure, the shit will hit the fan and our lad Cahal will be discovered. At this point, the wrestlemetal kicks in and Earthblood immediately transforms into a psychotic, button-mashing brawler. These wild and gory encounters see Cahal adopt the form of a sexy terrifying werewolf (“Crinos”), before immediately getting to work ripping the limbs and popping the skulls of an army of cut-price Banes that barrel through each room’s Bad Guy Doors.

Completely reckless and chaotic in nature. Earthblood’s combat is cathartic fun, thanks to our fanged friend’s variety of body-smashing moves and alternate stance choices. Cahal rip ‘n’ tears like there’s no tomorrow, and you can’t help but get swept up in the delirious mayhem of it all, like King Kong rampaging through New York City. As Earthblood progresses, this explosive action does wear out its welcome, not helped by the fact that there is no penance to Cahal’s unstoppable force. Once a battle scene is cleared, with the screams of the dearly departed (as well as all of their vital organs) bouncing off the walls, the stealth gameplay immediately resumes, with Cahal tip-toeing into the next room where nobody is any the wiser of the preceding massacre that took place just 10 feet away.

Earthblood is the loudest stealth game you’ll ever play. 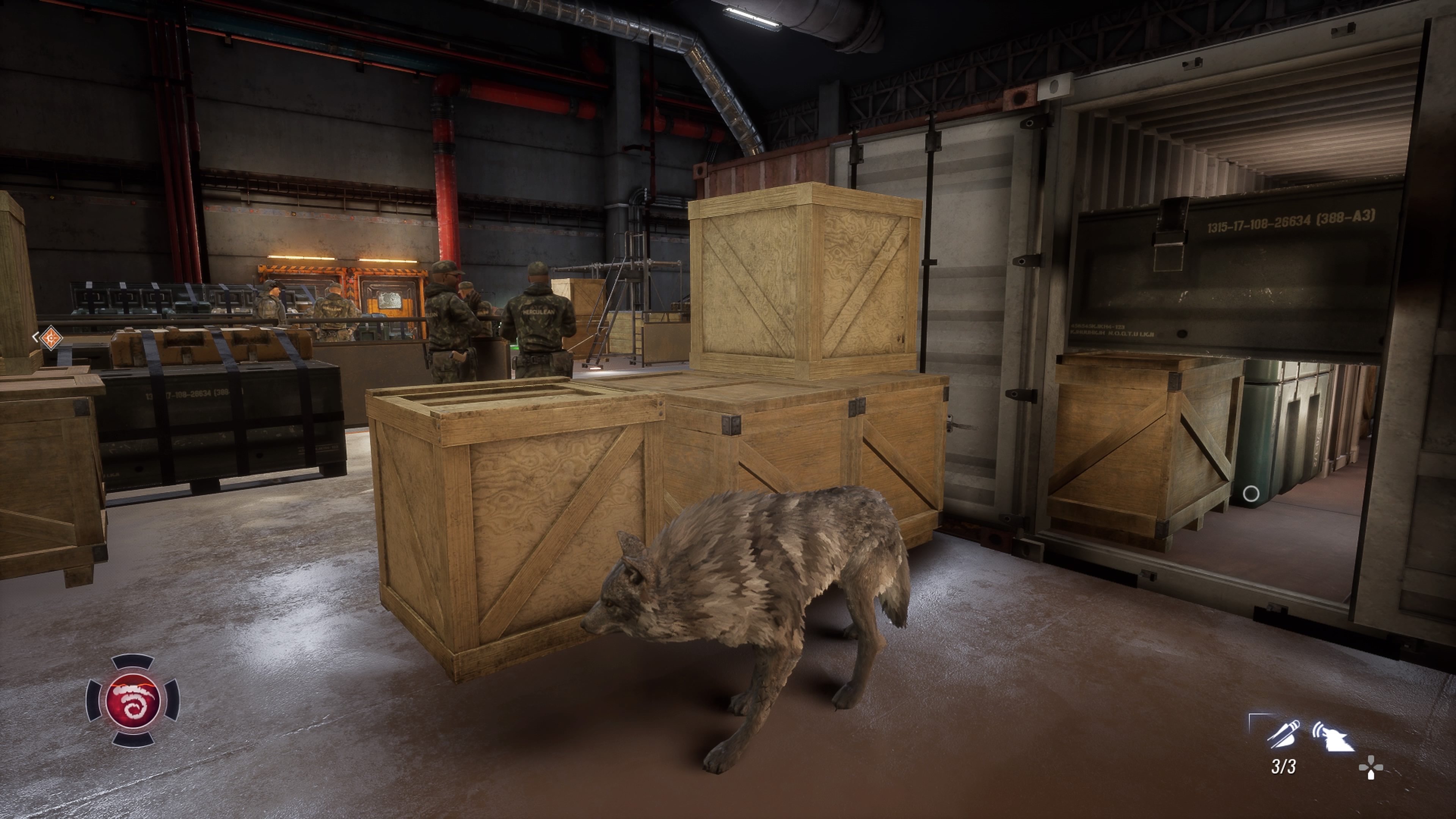 The head-scratching disconnect and lack of consequence in this hybrid gameplay are indicative of Earthblood’s overall dated design. Character models and interior scenes look believably seventh generation, while the gameplay arguably belongs in the PS2 era. We’re back to a time where you can do stealth takedowns but can’t move bodies, where an enemy will occasionally spot you through a wall, where extra ammo is randomly found lying on office desks, where shadows are optional, and be sure to watch out for those red barrels, they look kinda flammable. Though Earthblood’s visual effects – explosions, electricity, destruction mechanics, and the metamorphosis itself – look spectacular, almost everything else pangs of design decisions long retired by other adventures in the AA market.

Importantly, Earthblood treats the Werewolf: The Apocalypse lore with the utmost respect. A total newcomer to the franchise will soon learn some interesting facts and tidbits about the Garou and their nefarious nocturnal activities, perhaps enough to spark curiosity into the history of the tabletop edition. From a narrative standpoint, Earthblood starts very well indeed, with an excellent cinematic sequence and an introduction to a likeble band of heroes. As the plot progresses, however, things get far more rote. The villains are terrible, multiple women become hapless damsels, characters make angering, pointless decisions, and the story culminates in a choice of two equally nihilistic and unsatisfying climaxes. For a game so refreshingly entrenched in a green, ecological message – one that is very welcome in 2021 – Earthblood’s tale leaves the player feeling mostly dour and hopeless.

Disappointingly, plot threads begin to incorporate Werewolf: The Apocalypse’s lore at large – touching upon additional clans, spirits, and history – but are never explored. Earthblood occasionally threatens to ask The Big Questions: Is eco-terrorism justified? Are the Garou nothing more than murderers? Is it moral to kill in the name of preservation? At what price for our energy sources? But such queries are shut down just as quickly as they arrive, denying Earthblood a unique intelligence that would have seen it stand apart from its brethren. Most intriguingly of all, there are tell-tale signs that Cyanide may have had a far more ambitious project in mind. Earthblood features two attractive – but almost entirely empty – hub worlds. There are dialogue trees – complete with unlockable conversation paths – that have almost zero consequence. There is a skill tree that ultimately proves superfluous, a couple of very simplistic optional quests, and character arcs that are simply dropped entirely. 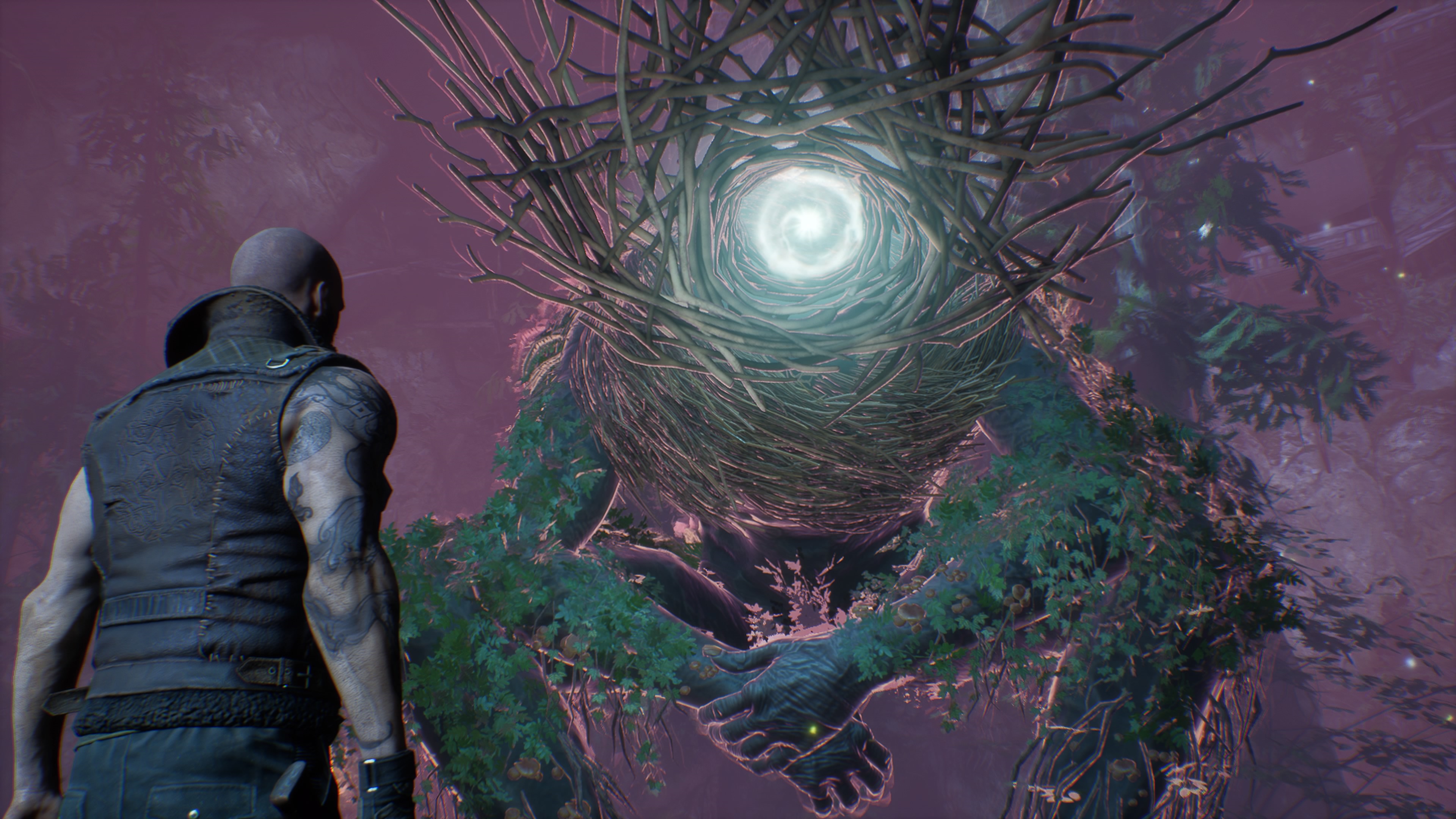 With less linear gameplay, more varied locations, and a tighter focus on the moral topics at hand, there is an excellent Werewolf: The Apocalypse RPG to be made, a hypothetical, dark fantasy epic filled with moral conundrums, an exciting open-world, and a cast of fascinating and motivated characters. But Earthblood isn’t it. While the tale of Cahal, his Caern, The Wyrm, and Tarker’s Mill dances with exciting possibilities on numerous occasions, it rarely strays from a path of outmoded design choices, dull locations, and repetitive stealth gameplay. By the halfway mark, it’s all become too long in the fang.

Werewolf: The Apocalypse – Earthblood proudly wears the reverence for White Wolf’s lore on its furry sleeve, with a dark-but-interesting universe and a fierce pro-environment/anti-capitalist message. But behind its wild, bloody carnage and well-meant intentions lies a dated and sorely repetitive stealth adventure that, among its contemporaries, fails to stand out from the pack.

[This review is based on retail builds of the game provided by the publisher.] An exercise in apathy, neither solid nor liquid. Not exactly bad, but not very good either. Just a bit “meh,” really.
How we score:  The Destructoid reviews guide