The SaGa series may not be Square Enix’s flashiest franchise, but it has certainly seen something of a revival in recent years.

When we spoke with the SaGa team back at E3 2019, Square Enix had recently re-released Romancing SaGa 2 and had just announced upcoming launches for Romancing SaGa 3 and SaGa Scarlet Grace: Ambitions — all games seeing the light of day for the first time in English. Since then, we’ve also seen re-releases for the original SaGa Game Boy trilogy in Collection of SaGa and the most recent SaGa Frontier Remastered, along with the global launch of mobile entry Romancing SaGa Re;univerSe. It’s been a busy two years for the franchise, for sure.

RPG Site had a chance to catch up with Square Enix’s SaGa team to talk about the current state of the series, speaking with SaGa series creator Akitoshi Kawazu, as well as SaGa producers Masanori Ichikawa and Hiroyuki Miura.

In our conversation with the trio, through a language interpreter, we touched on a handful of topics such as series history and localization. One topic we at RPG Site were especially curious about was the reception of these recent re-releases and how they met the SaGa team’s expectations.

“So first regarding Collection of SaGa: In terms of sales, it’s actually a little bit above what we have forecasted, so it’s on a good path,” starts Miura. “This was a complete port of the original Game Boy titles, and in that sense, we feel that it aligns with what the users were envisioning and that it met the player’s expectations.” Continuing on, Miura shifts focus to SaGa Frontier Remastered, “When we look at the sales so far, this is also above what we were forecasting.”

SaGa Frontier’s remaster hit multiple platforms and PC, to which Miura gives us a little bit of an overview of the game’s platform breakdown. “One thing that was especially unexpected was the number of Steam sales, which have been more than what we had forecasted, and there are more Steam players than we had anticipated. When comparing across the board, though, the Switch version has produced the most sales, which were a lot higher than what we had predicted.”

It remains to be seen if we’ll get anything more concrete about these SaGa sales or details about Square Enix’s expectations for the series, but at the moment, it sounds like things are doing well enough for current efforts to continue for the foreseeable future. 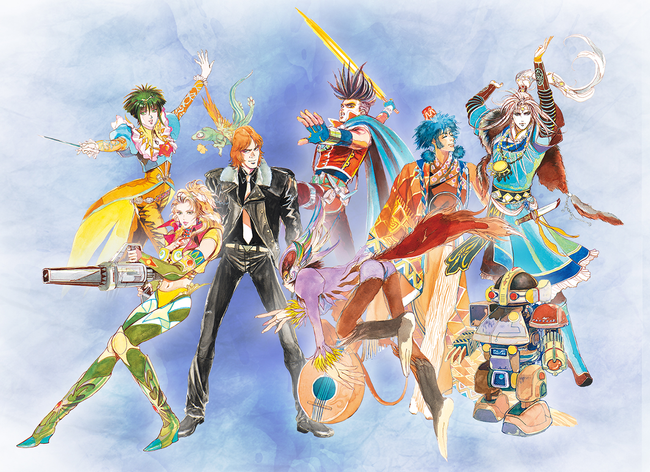 Back around the launch of SaGa Frontier Remastered, SaGa boss Akitoshi Kawazu stated a desire to also re-release the remaining SaGa titles that have not yet been ported, listing by name Romancing SaGa, SaGa Frontier 2, and Unlimited SaGa. Of course, we had to take a chance to see if the father of SaGa could elaborate any more on potential upcoming remaster plans, as well as insight as to what considerations might need to be made in giving these entries a second chance.

“This is a very difficult question …, and I can’t go into many details,” Kawazu begins. “There are probably titles that we will need to really look into revamping the content before they can be re-released, such as Unlimited SaGa.”

For those unaware, Unlimited SaGa is something of an especially notorious SaGa entry for being a difficult-to-penetrate game with complex mechanics not well explained. “For these titles, we definitely will need time to consider this, and of course, the development of such a remaster will take more time than usual as well,” he states.

Kawazu continues on, “On the other hand, there might also be SaGa titles that we can more easily re-release right away, without the need to make too many adjustments to them. It really is a case-by-case scenario, where we’re looking at each title one by one.”

Unfortunately, Kawazu couldn’t offer any more details about future plans for SaGa. We know there is also a new SaGa title in development, going by his statement in April, but it seems like it might be a while before we see anything from the new project.

Regarding future remasters though, Kawazu ends our conversation with something of a soft promise.

“Rest assured, that we are planning the remastering of these titles and making those considerations. Please stay tuned for when we are able to make those announcements.”

Our full interview with Square Enix’s SaGa team will be online soon, so please keep an eye out for it.