It doesn’t get much more niche than the dungeon crawling ‘DRPG’ genre. With a first-person perspective, walking step-by-step in gridded labyrinths, these games have an old-school style that some might simply find outmoded today. But some developers are keeping the sub-genre alive in 2021. NIS America has released one of the more recent DRPG entries: a dual-pack of RPGs for Nintendo Switch and Steam, titled Saviors of Sapphire Wings / Stranger of Sword City Revisited.

Let’s sort out some of the particulars. Both of these titles are DRPGs developed by Experience, a small Japanese developer whose other titles include Demon Gaze and the upcoming Undernauts: Labyrinth of Yomi. The first game in the dual-pack, Saviors of Sapphire Wings, is a remake of one of Experience’s oldest RPGs, while Stranger of Sword City Revisited is a re-release with some new additions.

Let’s start with Saviors of Sapphire Wings, which is a new game for English-speaking audiences. Being a remake of an older title, it’s a bit more straightforward than other DRPG entries. You, the hero, lose in the ultimate battle with the demonic Overlord. One hundred years later, you awaken with a second chance to take down your adversary, who is now threatening to spread his fiendish influence around the world.

In many dungeon crawlers, your playable party composition takes focus at center stage. It is commonplace in the genre to create your own group of characters – everything from their classes to their appearances and their names. Saviors doesn’t work quite like that. Instead, you’ll encounter bespoke written characters who will join your party in a typical fashion similar to most RPGs . The first you’ll meet is Saul, an adopted farmboy with aspirations of being a knight. Then you’ll meet Eltha, an Elven girl assigned to your team with duty as a priestess. And so on.

However, while these characters do have a default starting class, you are given the option to change this and configure the character in whatever way you see fit. Eltha is clearly designed to be a mage, for example, but you can reshape her to be a damage-dealing physical attacker if you want. Interestingly enough, the game even offers you a few different artworks of each character, such that you can change their class while still having them look the part. In this way, Saviors of Sapphire Wings still, in some ways, works like it has a character generator. 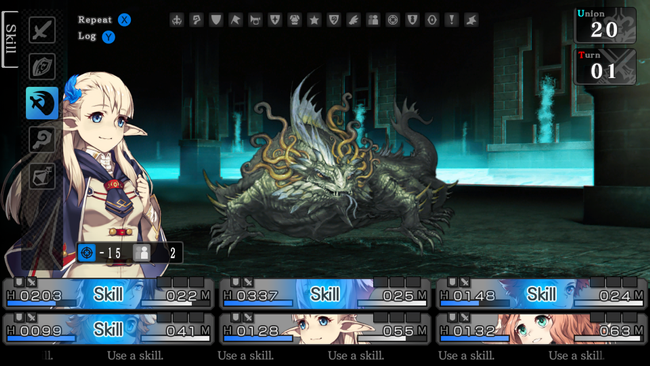 If you are new to dungeon crawlers, Saviors of Sapphire Wings can work pretty well as an introduction point. It has an easy mode, so you are given a little bit of slack if you aren’t experienced in the genre and familiar with conventional strategies. It’s also relatively straightforward, with a structure and style a bit more similar to traditional RPGs while also introducing many gameplay gimmicks commonly found in DRPGs. You have the underwater dungeon that prevents you from casting magic. You have your immortal enemies that require special weapons to defeat. You have poison floors, warps, one-way paths, and so on. If you aren’t already familiar with the tricks of the trade, you still might find a decent challenge here, even on easy mode, but nothing that can’t be learned with a little bit of trial and error.

What’s unfortunate about Saviors of Sapphire Wings is that, ultimately, it is just not an interesting game. The characters are largely one-note, the storyline is flat, and the artstyle isn’t exactly gripping either. There is a character bonding system in the game as well, but it is ultimately unremarkable.

That’s not to say the game is outright poorly designed or fundamentally flawed in any marked way. It’s more that there is simply nothing about Saviors that is exceptional, nothing that I can point to as its strength – no good reason to play it. Without this hook, Saviors comes across as a bland if serviceable DRPG. It finds itself as functionally a decent entry-point into the genre, but effectively not a stellar game in its own right. More than anything else, perhaps Saviors of Sapphire Wings works best as a warm-up act to the second game in this compilation. 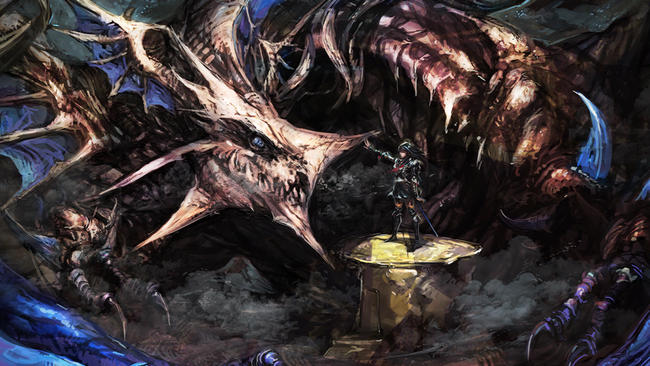 Stranger of Sword City Revisited, on the other hand, is an immediately more-interesting dungeon crawler. I reviewed the original release of Stranger of Sword City back in 2016, and I was quite fond of the game barring a few key setbacks. The artstyle alone is much more striking than in Saviors, appearing as a mix of Western and Japanese styles with a painterly aesthetic.

Here, you are a normal modern citizen suddenly thrown into the mysterious world of Escario after your plane crashes into a strange spatial anomaly. You and other ‘Strangers’ to this land find yourselves with excellent combat and magic prowess, soon forming a Stranger’s Guild in order to work together in seeking a way back home.

Most of the topics I touch on in my original review of the game still hold true with this release, both in terms of my impressions and descriptions of game mechanics. Much of the artwork and music in the game is simply very good, combat is challenging but rewarding, and the overall premise is much more compelling than what is found in Saviors of Sapphire Wings.

The ‘Revisited’ release makes a few additions to what I had played in the past, alongside many smaller improvements to the game. In terms of new content, there are three new classes to play around with, although I admit I stuck with a tried-and-true party without the new units. There are some new areas in existing dungeons alongside several new post-game ones. There are also a few more small edits to the game’s ending sequences.

One of the most significant changes is the addition of a Beginner Mode. Stranger of Sword City was a pretty challenging DRPG when it released in 2016 – not a game you could ease your way into. This easy mode is a welcome addition for those wanting to experience the game without as much of the frustration that came with the prior release. Even with this, I’d imagine SoSC is still not exactly a great entry into the dungeon crawling genre, unless you are willing to butt your head a bit against some of the game’s less friendly encounters and mechanics. 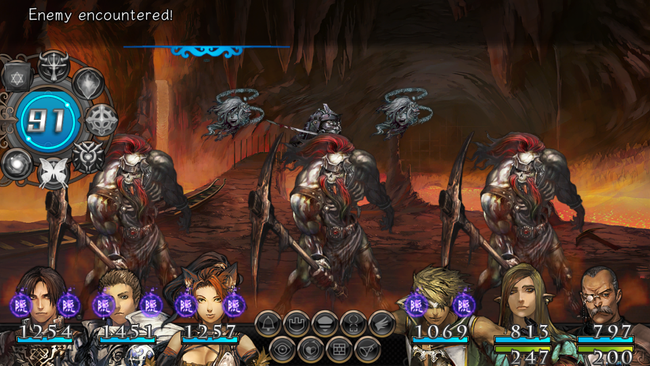 Other changes have been made as well. In my original review, there was one component of the game I took immediate issue with. Primarily, the game’s penalty for character death seemed humorously steep. Rather than just having to revive characters with an item or skill, you would either have to spend a silly amount of money or wait for several battles before they could be added back to your game. In Revisited, these penalties have been lowered significantly. You still have to be careful, as units still only have a few life points before they are gone forever. Honestly, you are still better off not letting units fall at all, but at least if you do have to swallow a downed fighter, it’s not as steep of a setback as it was before.

Interestingly, NIS America has also improved Stranger of Sword City’s English localization dramatically from its original release years ago. Characters sound much, much more natural than they did before, with each having a more distinct character voice and far less awkward dialogue overall. This was something NIS America didn’t absolutely have to do for a re-release, but I’m certainly very appreciative of the work put in here.

Outside of its art style, Stranger of Sword City’s largest strength is still in core combat, party-building, and dungeon-trekking gameplay. You effectively build a party from scratch to take on numerous dangerous foes within tricky labyrinths. Some issues still remain, however. Despite some interesting narrative setup regarding the nature of the motivations of the various factions in Escario, the story does end with a bit of a whimper. It’s disappointing for sure, but not a deal-breaker for a title focused more on the gameplay end.

I reviewed the PC ports of these games which don’t offer much at all in terms of options, but for dungeon crawlers, you don’t really need too many bells and whistles. I had no problems at all running Saviors of Sapphire Wings, but oddly enough, I did run into a few random crashes in Stranger of Sword City. Some patches to the game have already alleviated the issue somewhat, though not completely, and another patch has been released I haven’t yet been able to check out. Hopefully, any remaining issues are resolved shortly.

Saviors of Sapphire Wings / Stranger of Sword City Revisited fits its intent to include a title more suited to novices along with a title more suited to veterans, but Stranger of Sword City is really the reason the dual-pack is worth picking up at all. It’s Experience’s best game to date, offers a style not seen much elsewhere, and new updates improve it markedly over its original release. Dungeon crawler fans should definitely give it a try, and those new to the genre will at least be able to acclimate a bit.