Another SEGA attraction is now closed down after about 7 years of service. The Sonic Railway in the Lalaport Fujimi City shopping center in Saitama, Japan is no more after January 10. The train station had a miniature sized train cart (fully operational with buttons and lights for kids), affixed with blue and yellow and had Sonic pictured on all sides (with the front and back doing the pose from Sonic 1). It also showcases a small track with crossings, make-shift bridges, and a garage which houses additional carts. Some additional carts were used as collaborations as well, such as Gautama and Hello Kitty. The attraction (also loosely named “Sonic Station”) was for all ages and gives you a small introduction on how train carts and stations operate on a basic level in Japan.

A farewell event took places as well from January 8 – January 10, citing a rock-paper-scissors tournament, photo ops, and a small fair including Sonic himself, prizes to give out and a commemorative board where people can write their goodbyes on sticky notes. The station was 200 yen for one ride, and you could get a keychain for an additional 200 yen, when supplies lasted. You can still look at pictures and video on the companies Twitter account. 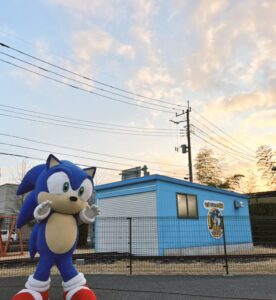 The SEGAbits Swingin’ Report Show LIVE: Into the SEGAverse