Mass Creation’s Shing! is a side-scrolling beat ’em up in the traditional Streets of Rage mould that valiantly attempts to inject a little originality into the genre by utilizing a unique control scheme which sees player’s attacks assigned to the right thumbstick, rather than the usual button-bashing way of things. It’s an admirable idea and one that possibly could have worked out rather well, if it wasn’t for the fact the game suffers from – amongst other things – a combination of frustrating performance issues, shoddy combat and scrappy enemy placement, resulting in an experience that’ll test your patience more than it will your fighting skills.

Shing! tells the story of a bunch of street-wise fighters, protectors of a mysterious magical object known as the Starseed, who are called into action when a bunch of evil Yokai take off with their charge and won’t give it back. Rude! As far as narratives go, it’s around about the level you’d expect from the side-scrolling beat ’em up genre, but here it manages to annoy more than usual due to the childish, sexist, mind-numbingly unfunny writing involved. In an attempt, we guess, to be edgy and humorous, Shing! decides to write its male characters as chauvinistic, pea-brained idiots, while turning its duo of female fighters into big-boobed sisters who do little more than partake in “bitch-fights” or sit around in swimming pools with their breasts out in the cutscenes that bookend the game’s laborious levels. 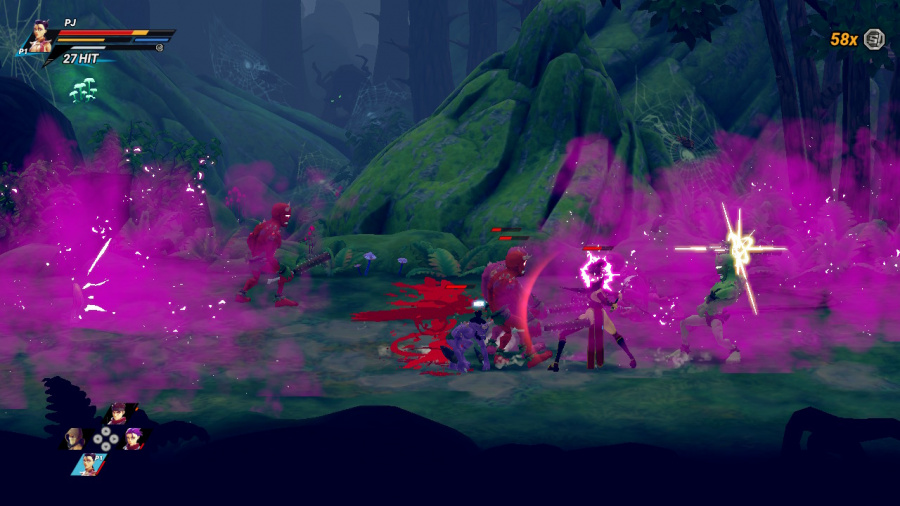 Maybe we’re being harsh, maybe some people are going to find this stuff hilarious, but it feels as though we really should have moved on from male protagonists commenting on how hot they find their female teammates, how big their asses are as they walk through doors and so on and so forth by this stage in the game.

Moving quickly on from the ham-fisted story side of things, that attempt to shake things up a little by employing a new control scheme seems, in the game’s brief tutorial at least, as if it may well turn out to be a great idea. Instead of mashing light, medium and special attack buttons, here you input various flicks, spins and nudges with the right thumbstick in order to pull off different moves. Rotate the stick fully and your character will spin their weapon in a windmilling motion to attack incoming yokai, upwards semi-circles whip your weapon upwards, holding down blocks and pressing straight up sends you and your enemy into the air for some juggle-time. 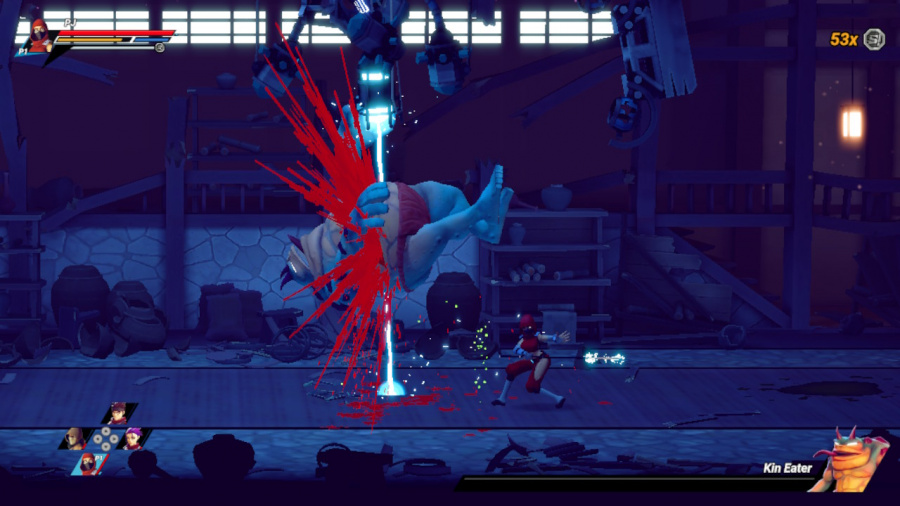 It all feels intuitive enough when you’re practising on a training dummy before heading into combat proper but, once you’re faced with a mob of enemies, things begin to fall apart rather quickly. The problems with Shing’s unique combat system are manifold. Firstly, it just isn’t accurate or refined enough on a very basic level, it doesn’t feel as though you can pull off moves with any real regularity or sense of confidence and, once you’re placed in front of a few angry demons, things quickly degenerate into mindless flailing or simply sticking to one or two moves to get the job done – not great when the game seeks to reward combos that mix things up. This is then exacerbated by the fact that Shing! constantly throws large groups of enemies at you in multiple waves on every screen, forcing you to really hammer the right stick repeatedly in order to survive which, in practice, is just really tiring and not much fun.

On top of all of this, this Switch port suffers from constant framerate issues, most especially when the screen begins to get busy with baddies – which is to say all the time – and so your attack, dodge and block timings go out the window as you attempt to take out a juddering mess of Yokai while the framerate tanks. We lasted through a total of two levels before jacking in the right-stick attack setup and switching to the game’s alternate, and entirely traditional, button-based control scheme. Even doing this, however, although it was much easier on the hands, didn’t really mitigate the inherent messiness of the combat at the heart of this game. 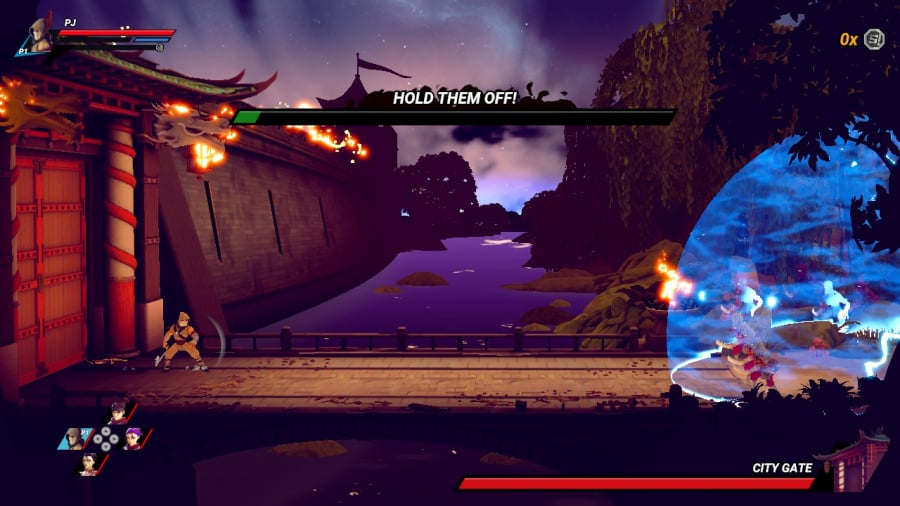 The fact is that enemies in Shing! – as much as the game tries to mix things up by throwing in shielded goons, poison-based baddies and little lightning-imbued imps – are just frightfully dull to face off against. They attack in highly repetitive patterns, usually en masse in an attempt to make things difficult, and it just never feels anywhere near satisfying to take them on. Levels quickly begin to feel like a frustrating grind to play through and that lacklustre story fails entirely to give you something else to keep plugging away for.

There are a handful of horrendous difficulty spikes, too; a few boss battles that come out of nowhere early on and frustrate the hell out of you until you manage to squeaky bum your way through. These spikes may well be partially because we played the game solo, Shing! can be played in four-player local co-op – or online co-op in an upcoming patch – but even with a pool of four fighters to switch between at any one time some of the spikes here saw us pulverised repeatedly until we finally managed to luck our way past.

One boss, in particular – a tree demon-type affair that traps you in its roots and fills the entire screen with noxious gas – was a real controller-wrecker, an abysmally designed fight that actually only really served to highlight how switching between your pugilists would see them drop daftly onto the screen and right into harm’s way, taking massive damage – and sometimes immediately dying – on account of the fact there are no invincibility or recovery frames to be found during combat here. 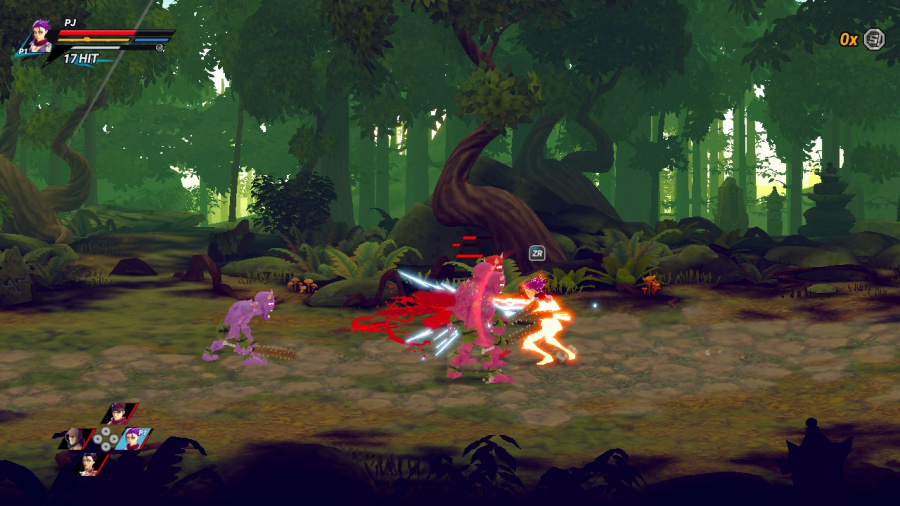 Whether you’ve just dropped into the fray, are attempting to get up off the ground, are trapped in a corner or charging a special, enemies can freely wail on you, leading to some absolutely infuriating deaths that you cannot do a thing about. We had occasions here where our entire four-person squad was taken out one by one as they dropped into where their teammate had just perished and ended up succumbing to the very same onslaught. Not ideal.

On the positive side of things, and there are some good points; the art style here – although this Switch version is quite pixelated and a tad blurry – is pretty strong. Lead characters are big and colourful and levels are distinct and throw up some nice variety as you move through the game’s roughly five-hour campaign. Missions all contain a single optional challenge room, for those among you who can find it within yourselves to enjoy the combat here and wish to polish up this aspect of your game, and there are even little lore areas that fill in more about the Starseed and the world in which Shing! takes place. 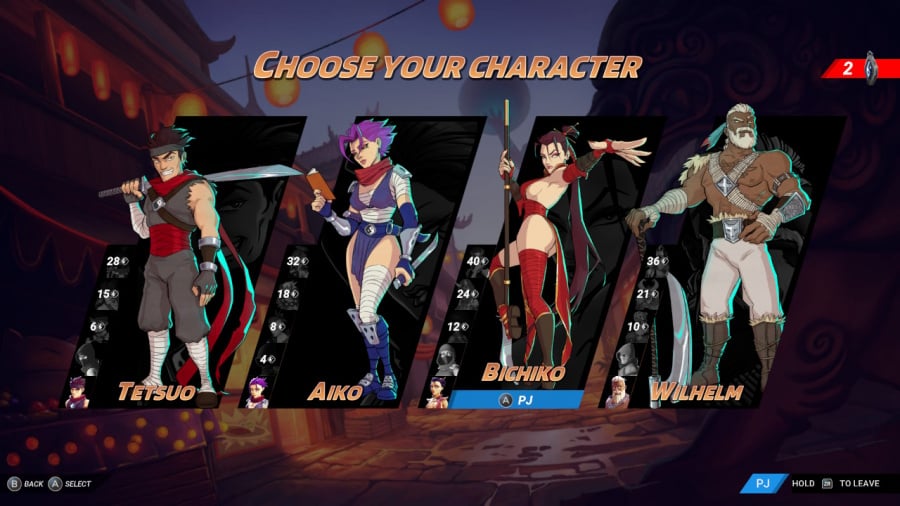 If only there had been more polish applied to how enemies attack in Shing!, with less focus on throwing the kitchen sink at you and more in the way of consideration given to how different foes could combine to present an enticing combat puzzle for the player to pit their wits and reflexes against – as is the case in the best examples of this genre. The right stick control idea could have worked here too if it wasn’t for the fact that inputs feel unreliable and messy hordes of enemies are flung at you haphazardly and in too great a number to encourage the sort of finesse in attack that would have helped the mechanic to truly shine.

Overall, Shing! feels like it had the makings of a solid side-scrolling beat ’em up, with an okay premise, decent setting, strong art-style and that unique attack mechanic to bring to the table. Unfortunately, for us, it all falls apart under the weight of nagging technical issues, terrible writing and shoddy, unpolished combat that feels more like a chore to grind through than it does a good time.

Sonic Prime Is the Name of the Hedgehog's Netflix Animated Series