The Switch can be anything anyone wants it to be. It has all the big Nintendo-magic hits you could hope for from the Mario, Zelda, and Pokemon series (we all continue to mourn the extended hibernation of Metroid and F-Zero), a slew of high profile cross-platform gems old and new to suit any budget and taste, and even quirky not-games like KORG Gadget and SmileBASIC 4 — tools that allow you to create your own music or dip into programming respectively.

And to a certain extent that’s only to be expected: a good modern console should have a healthy mix of fantastic exclusives, terrific third-party support, and the occasional bit of oddness thrown in for good measure – but a great one will offer even more. A great console will do all of that and then take you far away to forgotten corners of gaming you either never had the chance to experience the first time around or may not have known you were missing at all.

So, sweep aside all of the increasingly expensive tiny arcade cabinets, shrunken consoles, mini handhelds, and revamped Game & Watches that every company with a passing interest and the rights to something or other keeps asking us to dip into our pockets for — Nintendo’s Switch trounces the lot of them, a nigh perfect portable slab of retro gaming heaven that’s already home to some of the most legendary, challenging, and niche arcade releases of all time.

Let’s get the most familiar arcade giant out the way first: SNK’s Neo Geo. Released in 1990 and so far ahead of everything else at the time, this was literally a cutting-edge arcade machine for the home sporting cartridges roughly the size and thickness of a VHS ta— …

Okay, that comparison probably doesn’t work any more. Take a look at a Switch sitting in its dock with the Joy-Cons off. Yep, that chunk of plastic’s more or less the size and thickness of a single Neo Geo cartridge. These games could cost hundreds of pounds each when they were new and have mostly increased in value from there, now commanding the sort of prices that have dedicated AES (that’s the proper name of the Neo Geo’s home equivalent) collectors thinking ‘I could sell a shelf of games and buy myself a car’.

SNK’s eagerness to allow ports of these games on anything and everything has seen the Neo Geo become virtually ubiquitous but even so, these titles — some thirty years old now — still retain the elevated standards that has always made playing them feel like a brush with gaming royalty.

And so, thanks to Japanese publisher Hamster, we have all the now-usual greats on Switch: an unbroken run of The King of Fighters from ’94 all the way through to ’03, Garou, Samurai Shodown to V Special, both Last Blades and six different Metal Slugs. And so we should — they’re undeniable classics — but they’re also now very ordinary. Who hasn’t played the impeccably-animated Garou by now? Who doesn’t have a favourite Metal Slug? And this is where Hamster’s Switch collection of 109 Neo Geo games (on the US list) really starts to show its strengths, the sheer volume of titles not only soundly outdoing even the most fully-featured Neo Geo Mini (which doesn’t even hit 50 games), but enabling the collection to go beyond the safe classics and into more unusual territory, making the likes of Waku Waku 7, Blazing Star, and even the understated brilliance of Big Tournament Golf just a few button presses and a relatively small fee away.

Samurai Shodown II: Most home consoles at the time just weren’t up to the task of doing this incredible game justice and by the time everyone else had finally caught up with SNK’s mighty hardware, the sword fighting series had moved on to pastures new, making this popular game surprisingly hard to find outside of an arcade. Packed with incredible characters, fantastic fighting, and more real secrets than a nineties Mortal Kombat game had rumours (did you know the falling decorations on the title screen change depending on the day of the week?), it remains a highlight of not only its own series but weapons-based fighting in general.
Shock Troopers: Not the most obscure Neo Geo title available but definitely one whose quality far exceeds the faint praise and scant attention it’s received over the years. It’s more precise and shmup-like than screenshots may make it appear, and the multiple routes and differences between each character give players of all skill levels a good excuse to keep coming back.

Hamster’s tireless work doesn’t end with the Neo Geo. From arcade classics to Nintendo exclusives, their wider range of non-SNK arcade titles — games that were once only found in the best arcades around or locked away on expensive import collections — includes an impressive range of hits from publishers as well known as Namco, Konami, and Taito to under-appreciated industry legends like Seibu Kaihatsu, Irem, and Jaleco.

Thanks to Arcade Archives X-Multiply can rub shoulders with Kiki KaiKai, Sunset Riders, and even Ninja Gaiden, an arcade title that hasn’t been brought home half as often as the general familiarity with its name would suggest. In the near future, the colourful single-screen platformer Rod-Land will join them too, marking the first time since it was on the Commodore Amiga that that adorable game has had an accurate home port (one that’s stuck around, anyway — it was very briefly available on iOS, many years ago).

Switch owners are also lucky enough to play Nintendo’s VS series of arcade games — VS Tennis, VS Wrecking Crew, VS Balloon Fight and so on — at home for the first time, proof if ever any was needed that Hamster’s work goes beyond just making good old games easily available and extends into the realm of true historical significance; an interactive museum of arcade history at your fingertips.

City Connection: Help Clarice drive an adorable little car across floating platforms all over the world in this 1985, um, car ’em up to change their colour while avoiding police cars and collecting cans of oil. It’s one of those very eighties arcade titles that sounds a lot like a fever dream on paper but soon becomes something you can’t put down when played.
Zero Team: We readily admit we have a weakness for side-scrolling beat ’em ups (or belt scrollers, or whatever else we’re supposed to call them), and Zero Team scratches that particular itch perfectly with four player co-op side scrolling beat ’em up mayhem and a final boss who spends most of the game looking like he got lost on the way to a Phantom of the Opera dress rehearsal.

Further reading: Every Arcade Archives Game On Nintendo Switch, Plus Our Top Picks

The Switch’s unique design means the hardware comes with a huge built-in advantage for one of arcade’s oldest genres: Vertically scrolling shmups. Just slide out the Joy-Cons and prop the console itself up somewhere and you’ve got an instant arcade display. Heck, you don’t even have to go to the trouble of finding a safe resting place for your Switch, just slide it into a Flip Grip, slot the Joy-Cons in either side, and you’ve got a portable setup gamers could only dream of when they were degaussing their tilted CRT TVs a few console generations ago.

As it’s such a perfect fit, it’ll come as no surprise to learn the Switch has plenty of arcade-born shmups to keep even the most ardent genre fans busy, from the timeless red/blue chaining of Treasure’s Ikaruga to Cave’s ESP Ra.De. Psi and Psikyo’s Shooting Stars Alpha and Bravo packs, both of which contain an embarrassment of shmupping riches.

Horizontal shmups are just as well represented with a whole raft of Gradius’ and Salamanders to choose from, as well as Thunder Force AC, Last Resort, and In The Hunt. Whether you long for screens so tightly packed with bullets only your ship’s tiny hitbox is visible or wish to dive into shoot ’em up history with Konami’s 1981 title Scramble, there’s a real wealth of choice here — from yesterday’s most popular classics to true hidden gems.

ESP Ra.De. Psi: Cave began as a shining light in their chosen area of expertise with 1995’s DonPachi and over the years morphed into something of a stubborn holdout, the one company that can be relied on to makes shmups even when they know it won’t pay the bills just because they love them so much – and this outstanding dedication to their craft shows in every game they make.
Bells & Whistles (AKA: Detana!! Twinbee): Konami’s cute 1991 pastel coloured shmup is a welcome break from the usual sci-fi ships and magical flying people that tend to dominate the genre, but underneath that approachable exterior is a game that’s as quick to punish inattentive players as much as any other shmup. 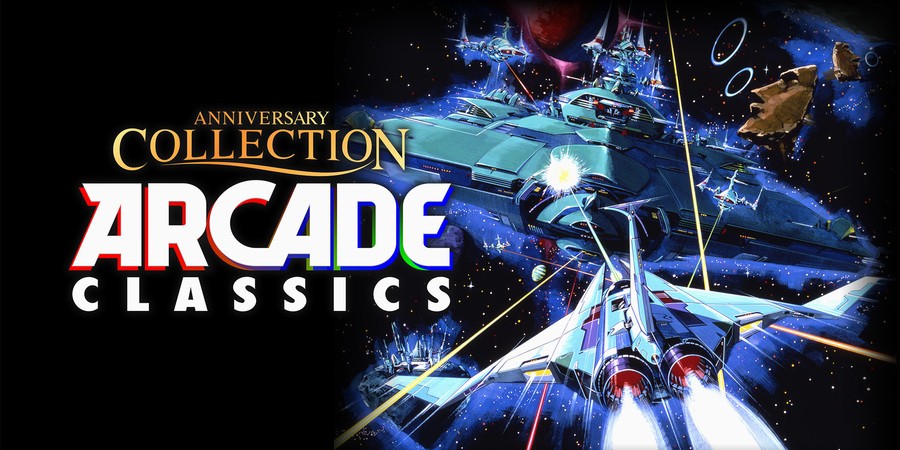 Being able to pick and choose exactly what you spend your money on across decades of arcade gaming is brilliant, but sometimes being made to buy a compilation can be even better as you get the chance to fall in love with something you perhaps wouldn’t have paid for by itself. Maybe you wouldn’t have bought Namco Museum Arcade Pac to play Rolling Thunder or Galaga, but if they’re already there you may as well have a go, and that quick five minutes may be all an old title needs to work its charms on you.

Konami Arcade Classics, Darius Cozmic Collection, Atari Flashback Classics and more all give you the opportunity to dip in to your favourite releases from each themed collection as well as try out a broader range of older titles you might have otherwise passed over if faced with a simple purchase screen and the chance to spend money on something more familiar, helping to give overlooked titles a second chance.

Capcom Beat ‘Em Up Bundle: Every single game on here is something to be treasured but our heart will forever belong to Battle Circuit. This game lets a young girl riding a pink ostrich with an eyepatch team up with a man-eating alien plant-person and if that doesn’t sell you on a game then nothing will.
SNK 40th Anniversary Collection: This pack’s filled with all the games you knew wanted, all the games you didn’t know you wanted but now can’t live without, and even more you may have never heard of at all. A true “something for everyone” collection, the breadth of games on offer is so great you’re bound to discover a new favourite and learn a lot about SNK’s pre-Neo Geo history along the way.

All the riches above are just a drop in the arcade ocean and it won’t take mucht thought to come up with the name of a much-wanted arcade title that’s not available for sale anywhere. When will home consoles ever see the Hyper Neo Geo 64’s Buriki One, for example? Or the incredible side-scrolling beat ’em up Knights of Valour 2: Nine Dragons? Or Namco’s Smash before Smash title Outfoxies? The Strider-like Cannon Dancer? And where’s our console port of Golden Axe: The Revenge of Death Adder, Sega?

But even with these inevitable (and often understandable) gaps, the Switch’s selection of arcade greats still covers systems and even entire decades that have been left languishing for too long, and we hope this enjoyable and educational selection of releases from gaming’s history only continues to grow in the years to come.

Let us know below which arcade classics you’ve revisited — or discovered for the first time — on Switch, and feel free to share arcade games you’d like to see arrive on Switch in the future.

Pick One: Which Of These Xbox Hitman Games Is Your Favourite? - Feature

Pick One: Which Of These Xbox Hitman Games Is Your Favourite? - Feature