‘Ey up, adventure fans! Are you hankering for a grave-robbing escapade reminiscent of Indiana Jones? But do you wish it were set in Yorkshire, trading jaw-dropping Incan ziggurats for drizzly moors? Well, have we got t’ game for you!

The Excavation of Hob’s Barrow puts your clicking finger in the shoes of one Thomasina Bateman, roving archaeologist and author. The book she’s compiling is a survey of the barrows of England – barrows being burial mounds. The latest lump of dirt to be profiled in this riveting tome is the game’s titular Hob’s Barrow, on the outskirts of the simple Yorkshire village of Bewlay.

And Bewlay is without doubt the shining star of the game – or the drab grey sky of the game if you like. Its muted shades grow richer as mist and rain subtly filter over the scenes, as the night starts to draw in and as darkness falls. The lone train line connecting Bewlay to the world is regarded with suspicion by most locals – as is Thomasina, visiting as she is from London, with a well-spoken air and go-get-’em breeches. The locals are all brought to life by excellent voice acting throughout, avoiding the pitfall of hamming up the Yorkshire accent. 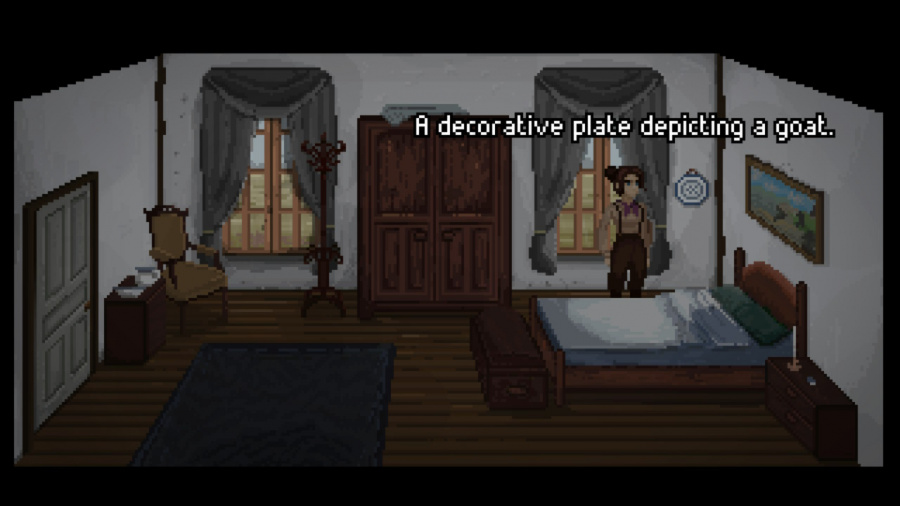 From its first moment, Hob’s Barrow performs its piece with a retro, low-budget horror movie style. Bleak scenes in dim, dour tones jump-cut from one to the other. Different flavours of silence flick shockingly from one to the next. There’s the silence demarcated by flat tweets of birds, the silence of aggressively over-produced repetitive wind buffeting an empty train station, and the silence of a stealthily built-up monotone electronic score.

These sonic layers accompany slideshows of suspiciously calm vignettes, striking the screen with unrelenting rhythm as if the by-product of some evil, unseen, unstoppable machinery: a sudden, stark close-up of an agonised face, rapt, unblinking as shadows flit across it; oh-so-innocent children playing with totally normal dolls, their harmless laughter echoing around the woods from every direction; a sheep. Everything about the opening act teased us perfectly, with one toe always dipped cheekily in the twilight zone. Were these creatures the bedraggled and horrific Yorkshirefolk they appeared to be, or just harmless zombies? It was impossible to say and we weren’t sure we wanted to know.

But the power of the game’s framing device is that it drags you along whether you have the courage to explore the secret of Hob’s Barrow or not. Relating her story in retrospective, Thomasina Bateman proves that she will go through with all her plans and emerge at the other end, albeit, judging from her deadened voice and her troubled expression on the title screen, not having had the happiest time. 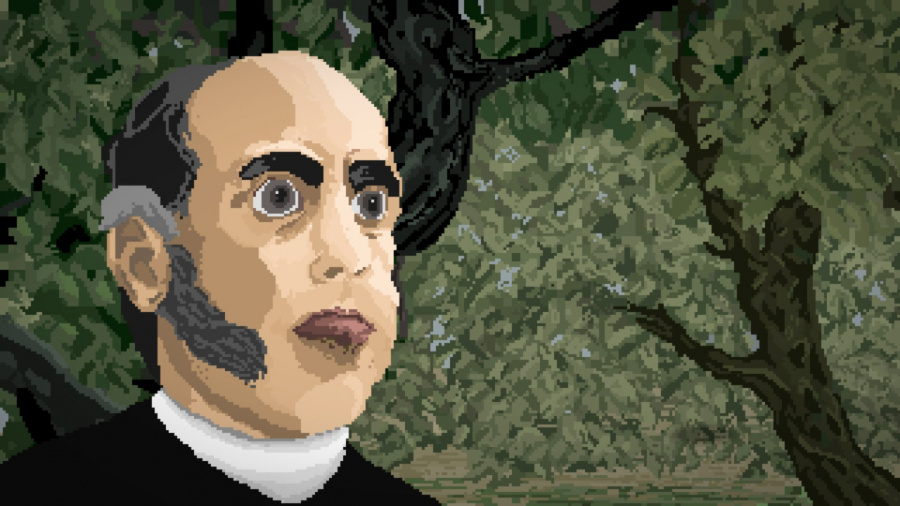 The horror Hob’s Barrow generates is absolutely palpable. The biggest jump scare here is not a screaming ghoul lurching in your face from a creaking loft, but a sudden train whistle in a field. The scaremongering is delivered instead by implication, rumour, the joining up of past events with the present and the future, and the resulting inevitability of doomed fate. (We won’t pretend the train whistle in the field didn’t make us jump, though.)

The accoutrements of the eerie, rural horror movie genre from which Hob’s Barrow borrows are so well produced that if it were a film, it might almost be formulaic. However, as a game – as a way to experience those details through interaction – Cloak and Dagger Games deserves praise for having dismantled and analysed the formula before rebuilding it in a new medium. This really is a horror movie you can jump right into.

On that note, it’s worth pointing out the extent of interaction on offer here. The game is narrative-driven and linear, unfolding its story through dialogue, voiceover, and some flashback scenes that are interactive but without choices to make. The puzzling is relatively sparse – and in early segments when there’s none to be had at all, it can feel like a clickathon to get the story to progress. 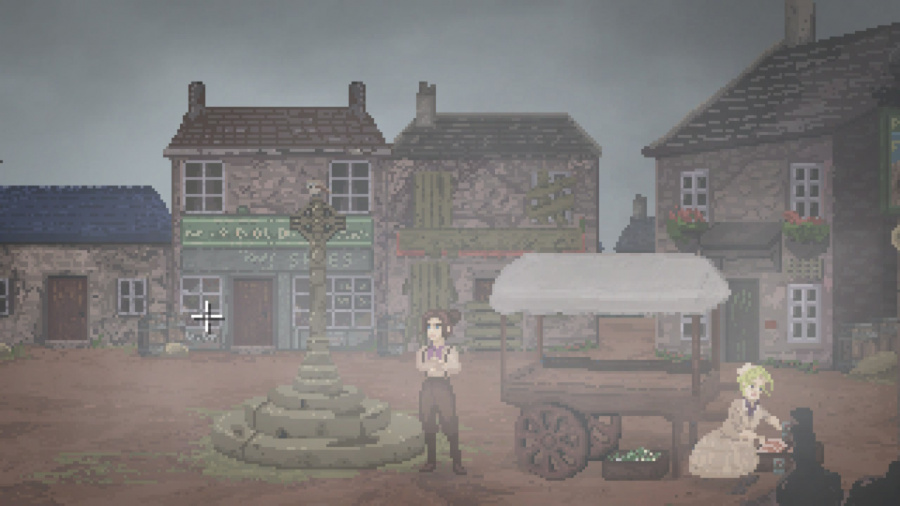 However, there is mercifully little filler here: no fetch-quest “puzzles” have been added, for instance. Hob’s Barrow shows confidence in its minimal nature. When the puzzles do crop up, there are some extended chains of logic that will have you sneakily manipulating other characters in a way reminiscent of LucasArts in its ’90s prime. So fair and well-structured were the mid-game puzzle chains that we didn’t stop to question, for example, the reasonableness of trying to steal ingredients for an arthritis ointment so we could have a goat milked. If a game pulls that off, its puzzles are doing OK.

All these signs of a magical game do unfortunately fade in the game’s third act. There’s nothing scarier than the imagination, but the coy hints of something nefarious going on at the start of the game eventually get fleshed out and the mystery is diluted. The puzzles, too, find themselves in bonkers territory by the closing sections. There are manipulations of the environment that make no sense at all from a narrative perspective. This pushes the game into semi-comedic Indiana Jones territory – a boulder rolling after a mine cart wouldn’t have been too out of place. This mood change feels more accidental than deliberate.

Fortunately, even the wildest puzzles are quite easily gettable, so we weren’t clicking back and forth lost for what to do amidst the absurdity. Cloak and Dagger has managed to build enough momentum in the first two-thirds of the game to push through the low-resistance silly puzzles at the end and stick a pretty neat landing for the story. 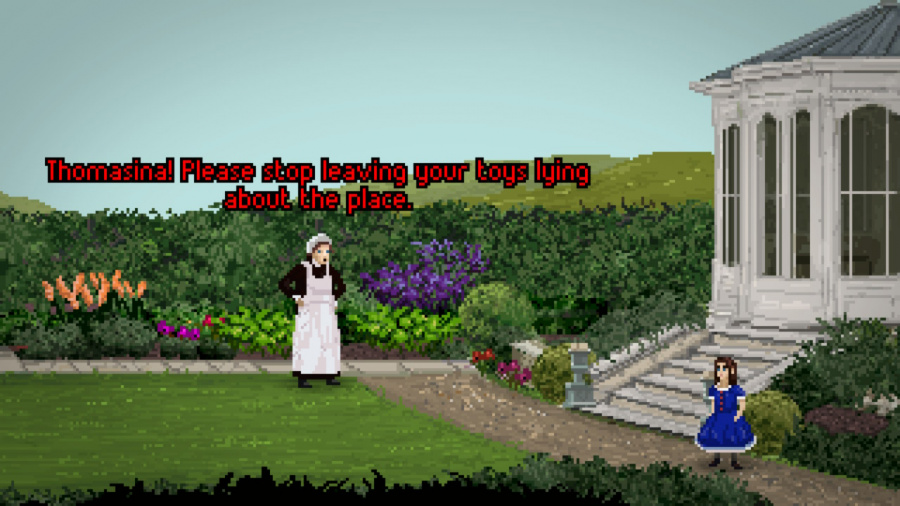 Since we keep mentioning “clicking”, we ought to touch on the controls. This is that rare Switch game that supports a mouse, which is a delightful way to play. However, we didn’t miss it too much when we were playing handheld, as the controller implementation is great and touchscreen is supported, too.

At its best, The Excavation of Hob’s Barrow feels like the halcyon point-and-click days of LucasArts. Some of its puzzle chains are compelling, immersive, and pitched just right difficulty-wise. It gets a bit messy in the third act, but not enough to undo the excellent scene-setting and plot-thickening that precedes it. Hob’s Barrow could have been hobbled by its muted setting; instead it brings a barrowload of supernatural chills.

How to upgrade spells with Mana and Spellcraft Challenges