It’s been a minute since Obsidian released The Outer Worlds back in 2019. The RPG seemed to release at an opportune time for a title of its nature, with other long-standing RPG studios having recently put out Anthem and Fallout 76 to less-than-positive reception. It remains to be seen what sort of lasting impact The Outer Worlds might have going forward, but before we get to that point, we have one final DLC offering to get to in Murder on Eridanos.

I felt that Peril on Gorgon, the previous DLC, was only just ‘fine’ when I reviewed it last year. The experience felt somewhat empty and lonely as you wander a largely abandoned facility, spending most of the time roaming around while taking out marauders and wildlife. While Peril on Gorgon certainly came up short on the NPC & dialogue side of the equation, this is not the case for Murder on Eridanos at all. Here, popular television actress Halcyon Helen has been murdered at one of the fanciest hotels in the colony, and it’s up to you to determine who the culprit is.

A whodunnit murder mystery fits nicely into the Outer Worlds mold, with several colorful characters acting as potential suspects in the crime. There’s the unintelligent and brutish boyfriend, the flamboyant and jealous co-star, the slippery private police boss, the weird but popular local self-help authority, and quite a few more. Where the previous DLC placed more focus on wandering and combat, this second offering will have you spending a good percentage of your time scoping the culprits, determining possible motives, finding clues & more, as any good whodunnit should have.

As you work to untangle the web that leads to Helen’s assassin, naturally, you discover there’s a larger picture to be seen. An unveiling of a new soda product, sponsorship conflicts, contract disputes, a stolen cow, and more, with some potential to having lasting effects throughout the rest of the colony. This is all caked in the usual corporate satire theming that permeates throughout the rest of the game, too, as is expected from The Outer Worlds.

The new Eridanos location looks great, with colorful flora and some neat skyboxes. It definitely is a more pleasant place to romp around compared to the bland and dreary Gorgon facility, even if both aesthetics were functionally appropriate for their location. You are at a luxury resort area in any case, combined with some facilities that look like something out of Willy Wonka. 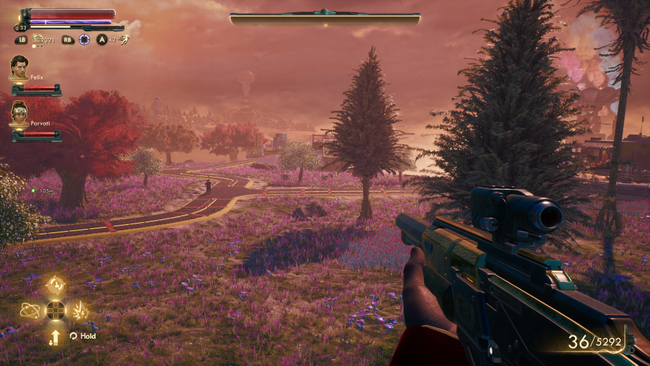 Eridanos is a pretty lengthy DLC as well; I spent about 10 hours being thorough, which resulted in it taking a few more hours than Peril on Gorgon. This is largely due to having several more NPCs to meet and talk to as you try to piece together what exactly happened on the night of Helen’s murder. The storyline does funnel you to more combat sequences as you near the end, but there’s definitely more balance between battles and dialogue this time around.

Unfortunately, Murder on Eridanos’ sidequest offerings still come up a little short, being a little bit too straightforward and signposted for my liking. One quest has you collect a missing robot, which is simply about 100 yards away. Another has you fixing a broken pool, which requires stepping into a nearby greenhouse, solving a simple puzzle, and returning. A third quest asks you to fetch a few datapads from a nearby cave – you go and fetch them and return.

This nature of quests is something of a carryover from the previous DLC and even the main game, where it feels far too many of them require a simple task to be completed with little to be found in terms of decision making, intricacies, or lasting consequence. If more elaborate elements are present in these questlines, I didn’t see them. 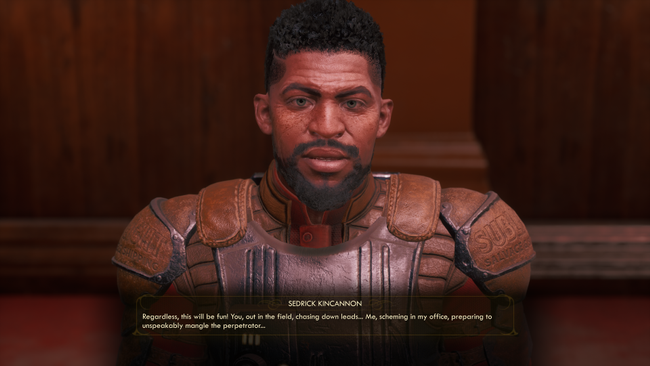 By far the most significant misstep for Murder on Eridanos comes up in its conclusion, as soon as you come close to solving the mystery. I won’t spoil outright what happens here, but part of the resolution revolves around a narrative twist that would make a parody soap opera blush. Personally, I felt it cheapened the experience I had up to that point, which is unfortunate because I was quite enjoying my time with this DLC until then.

It’s easy to create intrigue with the veil of secrecy, and sadly the landing of the storyline leaves a lasting stain on my impressions. Unfortunately, many narratives with a mystery focus place a lot on the shoulders of the eventual unveil, and Murder on Eridanos comes up on the wrong side of it. I still had a good time with the DLC, I just wish it stuck the landing.

The Outer Worlds – Murder on Eridanos is a sizable DLC offering that exhibits some fun murder-mystery hijinks with the same Outer Worlds flair you’ve come accustomed to in the rest of the game. With some niggling quest issues and an unsatisfying conclusion, I’m not sure if it is excellent enough to convince players to spend $15 and dust off a game they’ve already completed more than a year ago, but there’s still fun to be had for those looking for more.