I’ve never played a game that I felt more disinterested in than Werewolf: The Apocalypse- Earthblood. It’s certainly not the worst game I’ve played, nor is it the most buggy or most frustrating. It is simply the least interesting; a game that was a slog to finish even with its minimal runtime. Pre-existing fans of the World of Darkness source material might get more of a kick out of it, as might people who can just enjoy some of its dumb fun, but to me, it didn’t manage to make good on almost any of its gameplay or plot potential.

Players take control of Cahal, a Garou who leaves his tribe for five years after accidentally losing control and killing one of his own due to grief. He later reconnects with his tribe to take on Endron, an oil company that is killing the environment under the control of the Wyrm. All you really need to know is that Cahal and his tribe are essentially eco-warrior Werewolves, which is an awesome sentence and an intriguing set-up. Sadly, the plot is one of the weaker elements of the game, with little character development and little in the way of making Werewolf: The Apocalypse seem interesting to newcomers.

I will admit straight away that I haven’t experienced anything to do with the World of Darkness before, which might make me lose some credibility. When doing some research into the subject, however, I actually found myself fascinated with some of the lore on display. To be fair, Earthblood does mention many of the lore elements that I assume fans of the world will know about, like the different tribes and forms a werewolf can take, but none of that is well-explained to newcomers. I had to take the time myself to go online and find out exactly what Garou even meant, which shouldn’t be the case when there’s so much exposition otherwise. I appreciate that it’s not necessary to know everything about the World of Darkness, I just don’t think any of it is explored well in the game

It doesn’t help that lead werewolf Cahal is incredibly uninteresting to play as. Giving into his rage and killing one of his own is an interesting set-up, but it’s resolved pretty much off-screen, and then Cahal remains stoic and wise as ever. There were only a few spare moments where I felt interested in Cahal and his plight, and most of those moments had to do with his relationship with his daughter and mentor rather than the ongoing quest against Endron. Those moments come and go extremely fast, though.

A lot has already been said about Earthblood’s presentation, and I’m not going to beat a dead horse over it here. It’s not a good looking game, and it’s not a good sounding game either, leading me to wish that they’d gone with a more unique art-style rather than trying to look realistic and ending up looking something from the PS3 era. I will say that the game ran surprisingly well for me with extremely fast loading times and little to no bugs throughout my playthrough, which was a legitimately nice surprise.

Another big surprise is Earthblood’s brief runtime. It took me around five hours to get through the whole game, and I suspect it would take two or three more to get the platinum trophy. In my mind the short length was mercy, but for those who were actually looking forward to the game, it’s somewhat ridiculous. For those who dive further into the stealth mechanics, there might be a longer game hidden in here but it went by like a flash for me. 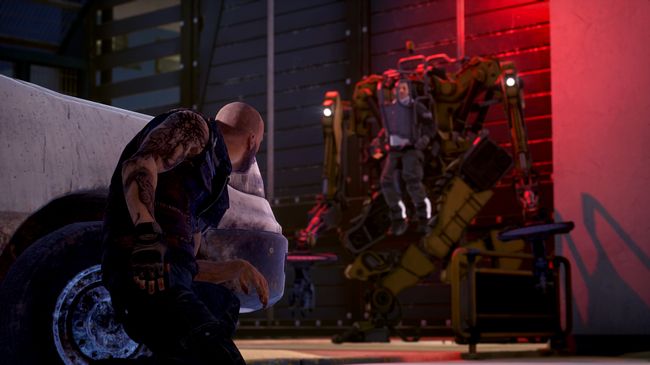 Sadly, my biggest problems with Earthblood comes from its gameplay systems and how it fails to intertwine them in a satisfying way. It’s also in the gameplay section where I have the most positive things to say about Earthblood, but we’ll get to that later.

The core gameplay premise of Earthblood, and the one that had me interested in the game, is the ability to switch between three different forms during gameplay. You have your human form for interacting with objects and stealth killing enemies, your wolf form for sneaking through vents and having lower visibility, and your Crinos form for basic button-mashing gameplay when you get into a combat encounter. That’s a good set-up, but the way the game actually handles it is botched, to say the least.

The rules are far too rigid between each of the forms, which makes them feel more contextual than anything else. The human form is the only form that can do stealth takedowns and interact with consoles, which means that you’ll constantly be switching back to that form when you’re trying to stealth it up as the wolf. The wolf form is only good for its low visibility and speed, but the speed is never taken advantage of and the stealth is so spotty that it often doesn’t matter what form you are anyway. Why the wolf form is so useless is beyond me, as it’s easily the most fun to take control of. Each form is only useful for one thing, and there are no choices to be made besides whether you want to stealth it up or not. Once you’re a Crinos, that’s it for any semblance of choice. 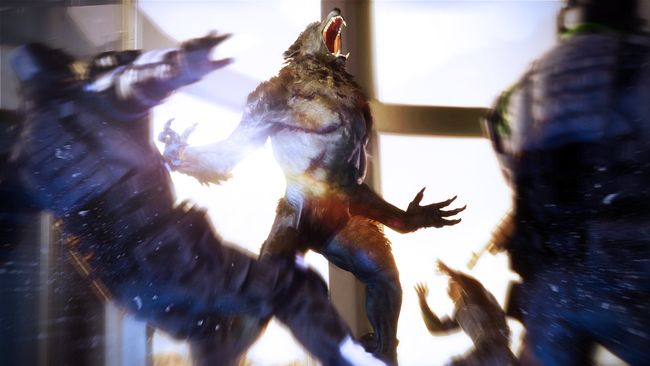 Stealth can be fun if you put the work in, but it draws each encounter out to be much longer and it feels incredibly basic. It doesn’t help that there’s absolutely no reason why you wouldn’t just jump into the Crinos form and get rid of enemies far quicker, as there’s no real advantage to choosing a sneakier, slower approach. A big part of the story is about Cahal’s lack of control over his rage, which could have been made into a unique gameplay mechanic where the player actively doesn’t want to turn into a Crinos, but there’s no such thing here. Pre-release information for the game promised a rage-management feature but it’s completely absent,when it could have done a lot for the game.

Easily the most developed part of the game is the combat as the Crinos form, and it’s the aspect of Earthblood I enjoyed the most. It’s basic hack and slash button-mashing gameplay, but the Crinos is so huge that even dodges deal damage to enemies and you feel like a massive wrecking ball of a beast as blood and bits of the environment fly everywhere. The inclusion of two distinct fighting stances also makes combat a bit more mechanically interesting, as there are certain enemies that take more damage from the heavy or light stance.

It’s nothing revolutionary by any means, but the combat here feels good and accurately portrays being a badass werewolf. After a couple of hours, it does get a bit repetitive and mindless though, so I would recommend occasionally jumping into the stealth to try and keep things fresh. At a certain point in your adventure, you’ll come to realise that one of Werewolf’s biggest sins is its repetition. Every mission has you going into an Endron base, sneaking around to deactivate doors and cameras, and getting into fights with the same enemies. 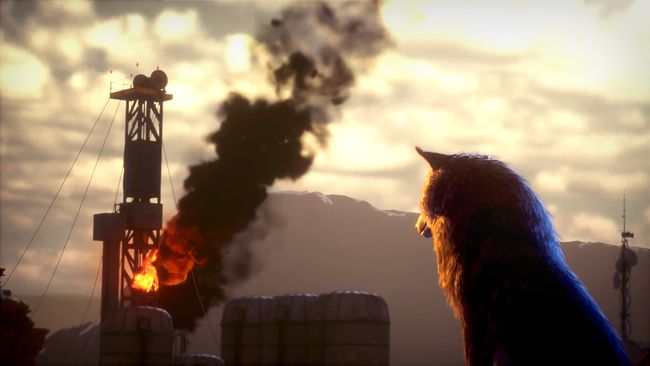 There is almost nothing in the way of side-quests, bar interacting with some spirits to upgrade your skill tree. There’s a hub-world of sorts, but there’s absolutely nothing to do in it besides walk from one mission start to the other and occasionally interact with your Cairn. Beyond a few enemy changes, there are never any substantial changes to the formula or what you’re doing. It’s remarkable that in a 6-hour game, you feel like you’ve seen everything it has to show within the first hour.

Sadly, there’s not really much in the way of RPG mechanics here either. There’s a basic skill tree that works well enough, but the dialogue choices are all fluff and exposition rather than affecting the story in any meaningful way. There’s a choice between two endings but if you’re expecting anything like Vampire: The Masquerade then you’ll be disappointed.

‘Disappointed’ really is the key word for Werewolf: The Apocalypse- Earthblood. I went into it with little expectation beyond some fun shape-shifting gameplay and came away with nothing but wasted time. The constant dad rock and bloodshed might be a guilty pleasure for some people and fans of the World of Darkness may get a lot more out of exploring this world than newcomers, but the uninteresting plot and characters make that very doubtful.

Final Fantasy 14's next expansion is Endwalker, takes players to the moon • Eurogamer.net

Final Fantasy 14's next expansion is Endwalker, takes players to the moon • Eurogamer.net