Zelda: The Minish Cap Is All About Seeing Things From A New Perspective – Feature

To celebrate the 35th anniversary of The Legend of Zelda, we’re running a series of features looking at a specific aspect — a theme, character, mechanic, location, memory or something else entirely — from each of the mainline Zelda games. Today, Kate graps her (Minish) cap and heads out for a stroll through a familiar landscape made new via a fresh point of view…

I’ve never completed a Dark Souls game, but I love talking about their design all the same. The premise of a Dark Souls game is often similar across the board: there’s something wrong with the world, and you have to clean it up or figure it out somehow. The undercurrent of design, on the other hand, is one of re-orienting yourself and seeing things from a different viewpoint. You will find yourself climbing through maze-like honeycombs of long corridors, swamps, castles and the like, only to emerge again at a place that’s so familiar to you that you wonder how you didn’t notice that you were walking back there this whole time.

I used to walk through London a lot, so I’ve experienced this in real life, too. That feeling when you turn a corner and that instant recognition hits you like a train is a wonderful thing, like coming home after a long and tiring day. I would deliberately manufacture my planned walking routes to recreate the feeling of being “lost” — of course, you’re never truly lost with a smartphone in your pocket — just so I could have that soothing homecoming moment, over and over again.

The more I walked, the more it happened — when I least expected it, even — and although I can’t say that I know London as well as a Hackney cab driver, there are some parts I can identify just by sight. I can even tell you where the closest café is, because what is a walk around London without a hot chocolate to keep you company?

I’m extremely tempted to kick off this piece (er, 300 words in) by boldly declaring that The Legend of Zelda: The Minish Cap is, in fact, a Dark Souls game — which it’s not, of course, since it predates FromSoft’s series by seven years, but also because it doesn’t actually share most of the design philosophies of Dark Souls: the hopelessness of entropy, and the need to keep trying all the same. I will say, though, that the DNA that runs through Minish Cap is more accurately that of a cousin, or step-sibling, to the Dark Souls games. It all comes down to perspective.

The Minish Cap is a game about a talking hat that makes you small. Previous Zelda games at this point have featured instruments, mirrors, and magical swords that turn you into a teen; in 2004, we get a mouthy nightcap. But this gimmick proves to be so much more than its initial pitch, bringing Link into the world of the Picori — tiny little pixie-people who live under the feet of the Hyrulians, who renovate upturned pots and leaves into their homes. 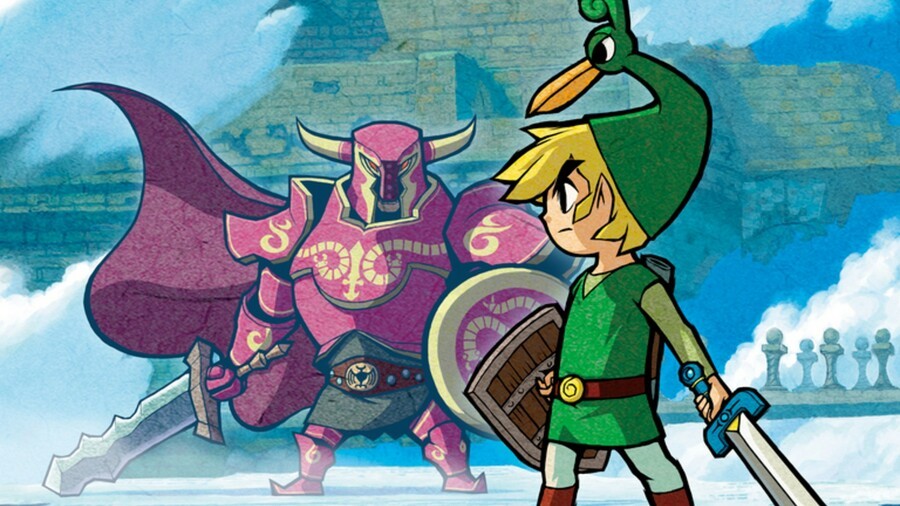 Suddenly, the world is doubled in size, even as Link is shrunk to a fraction of his. A bookcase becomes a ladder, a pair of shoes becomes an impassable object, and light rain becomes deadly deluge of Link-sized droplets. Just like Dark Souls, Link — and the player — are forced to re-orient themselves, and adjust what they know about the world. Never before did anyone particularly question the fact that there were Rupees in pots and grass, but Minish Cap answers the question all the same: ’twas the Picori who hid them there!

Much like Majora’s Mask before it, Minish Cap tries new things, with strange new items that have yet to be replicated in the series. Roc’s Cape, the garment that lets Link fly, may have been borrowed from the equally-weird Oracle of Seasons (also made by Capcom’s dev team, Flagship), and the Gust Jar — which sucks (no, literally) — would go on to appear in Skyward Sword, but the Cane of Pacci and the Kinstone Bag are Minish-only items. 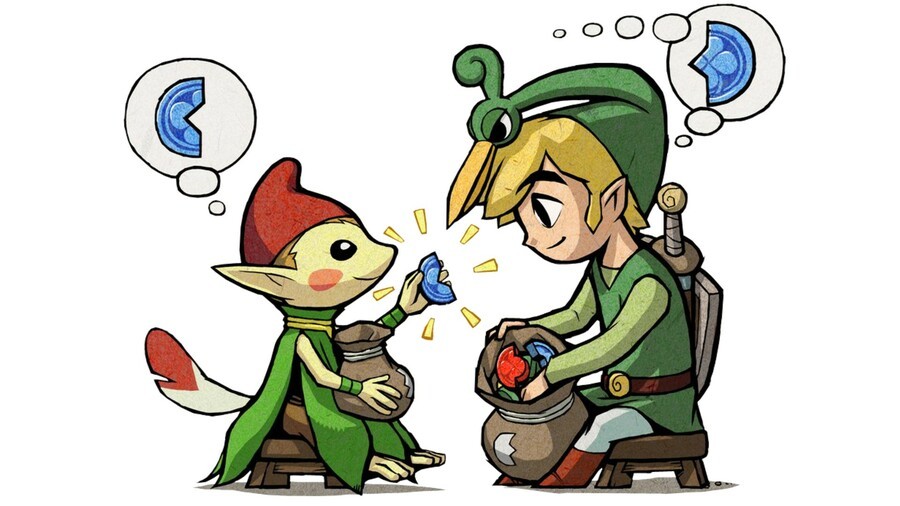 If only making friends was this easy

The Kinstone Bag is fairly easy to understand: you find tiny half-medals throughout the game, and search for people who have the other half in order to unlock secrets, new doors, and treasures.

The Cane of Pacci is a little weirder. It’s a magical crook that can be used to… flip things over. This power, at first, doesn’t seem like that big of a deal — oh, great, now everything is upside down, that helps — but you quickly discover that flipping over certain pots can unlock portals to the Picori realm, that some enemies can be defused by turning them upside down, and that firing the Cane of Pacci at a hole will turn it into a sort of trampoline. I don’t know how that makes sense, exactly… but it’s cool, so who cares. 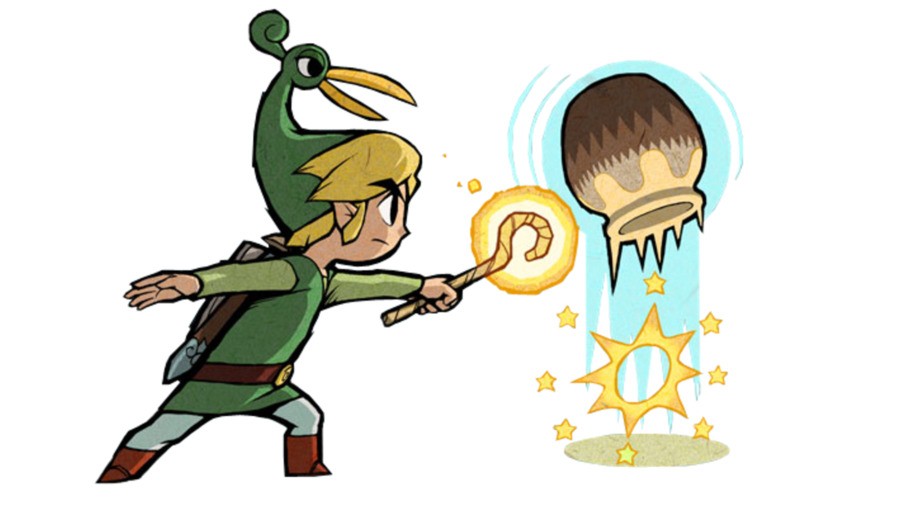 When all you have is a Cane of Pacci, every problem starts to look like an upside-down thing

Even more brilliantly, the Cane of Pacci ties neatly into The Minish Cap’s point: look at things differently, and you may just discover something new. What seemed like a normal pot before is suddenly revealed to be a gate between worlds; holes that previously barred progress are now able to catapult you to new areas.

But The Minish Cap’s best moment is its very first boss battle, which, like the Cane of Pacci, flips the player’s expectation on its head. Throughout the Zelda series, since Majora’s Mask introduced them, the Chuchu in its various colours has been one of the more irritating basic enemies. Although relatively tricky to beat in the very early stages, Link quickly becomes too beefy to bother with fighting these gelatinous goons, unless he needs their Jelly for a recipe. What better boss to convey the new risks and terrors of being small than… 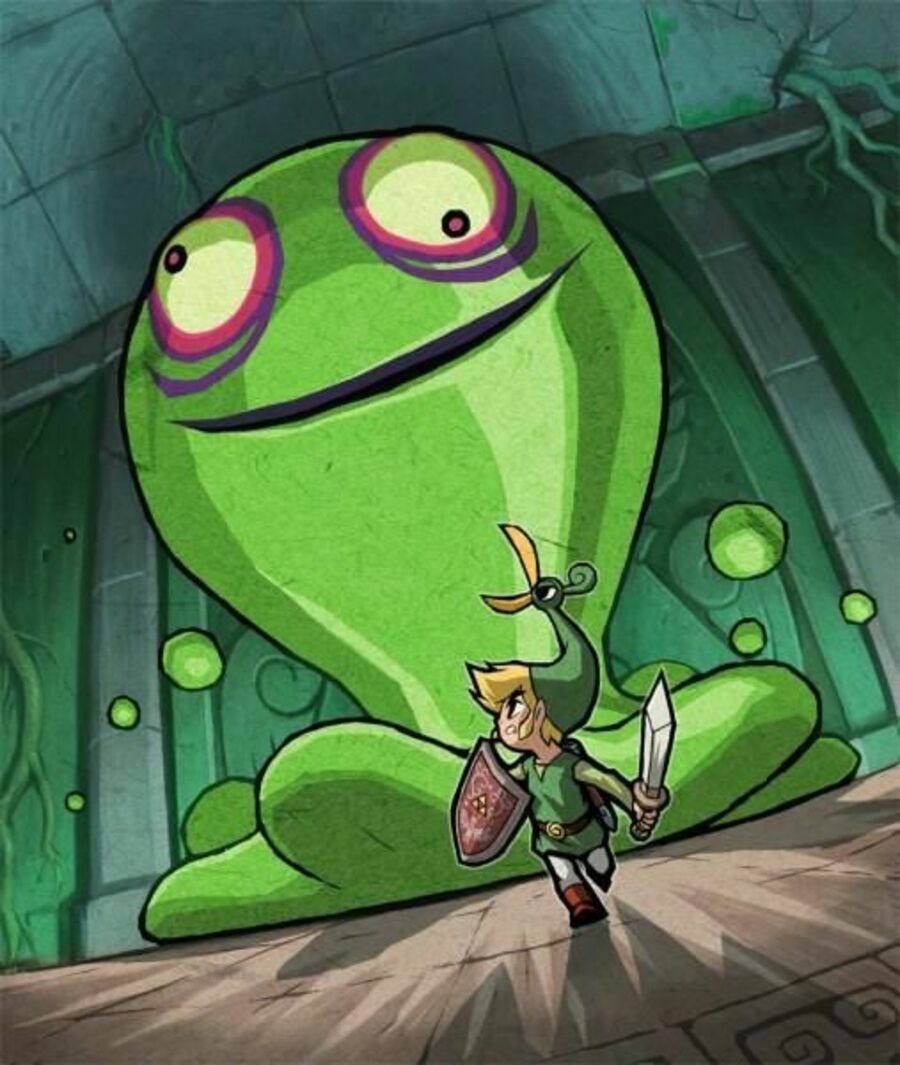 …The Big Green Chuchu. You can’t defeat this towering slime the way you normally would, by lazily slashing at it as you run past. This guy is so, so much bigger than you that your sword would hardly make a dent. Instead, you have to use the Gust Jar to slurp away some of his slime, weakening his… neck (?) until his huge head falls over and you can slice him in the eyes. 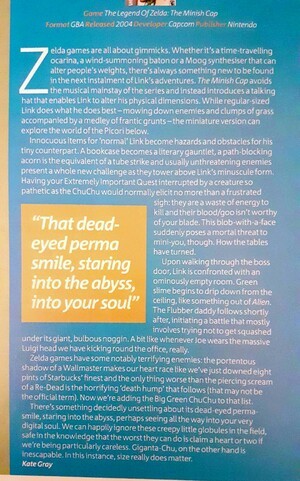 The genius of making an enemy that’s so basic that he’s barely a threat normally into a fearsome boss is something that I’ve never really seen again in a Zelda game, but it’s so quintessentially Zelda all the same.

I wrote about the Big Green Chuchu when I was the Staff Writer at Official Nintendo Magazine, so if you’ll forgive this moment of self-indulgence, here’s what I had to say about it back in 2014:

Having your Extremely Important Quest interrupted by a creature so pathetic as the Chuchu would normally elicit no more than a frustrated sigh: they are a waste of energy to kill and their blood/goo isn’t worthy of your blade. This blob-with-a-face suddenly poses a mortal threat to mini-you, though. How the tables have turned.

I will note that I also called it “The Flubber Daddy”, so, you know, take my words with a pinch of caution. Moving swiftly on…

In Bloodborne — the FromSoft game I’ve played the most — there’s a moment where you come to a gate, and, just like the hundreds of gates you’ve found before, you laboriously push it open with a heavy creeeak. You think nothing of it, except that you now have access to somewhere new. But a second glance will reveal that this isn’t just any gate — this is the very first locked gate you encountered in the game, about twenty hours ago. You had honestly forgotten about it, hadn’t you? But here it is, the beginning of the game, a place that was so familiar to me, not least because my Bloodborne tactic is ‘grind as much as possible in the starting area so you stand a chance’. 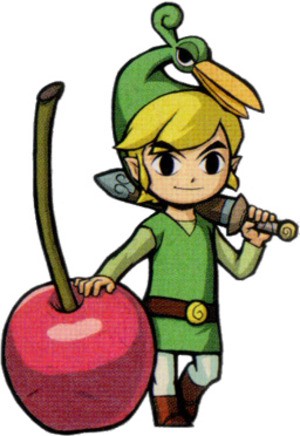 Whoops, I wrote another hundred words on From Software’s games in this Minish Cap feature. I’m sorry. But I do have a point, and that point is this: The Minish Cap, just like Bloodborne, can only achieve its sense of altered space through re-contextualising what we think we know. Coming back to a place we recognise is no big deal; I walk into my kitchen multiple times a day and it doesn’t blow my mind each time. But if I were on holiday in the Bahamas, and my hotel closet secretly led to my kitchen — now that would be a surprise. And a pretty useful one, since I probably left my sunscreen at home.

The Minish Cap’s charming use of everyday items, encounters, and set pieces makes it so incredibly special. A level that takes place in a rotating, hole-filled barrel, a boss that requires you to beat it as full-size Link and then climb inside its brain as tiny Link to destroy the wiring, and the lovable Picori that live inside repurposed shoes and carry needles as canes — all of these things could have easily been just normal dungeons and towns, with stone walls, wood floors, lava and the like. Instead, the developers took inspiration from the world around them, reminding players constantly that, when you’re small, everything is new and old at the same time.

Talking Point: What Free April 2021 PS Plus Games Do You Want?

These 100+ Games All Have Free Trials On Xbox One, Xbox Series X - Guide

These 100+ Games All Have Free Trials On Xbox One, Xbox Series X - Guide

The Quarry is giving 80s slasher screams to 2022 teens

The Quarry is giving 80s slasher screams to 2022 teens